Posted on 11th February 2021
William Clarke Quantrell (also known as Quantrill) was the most famous and feared Confederate guerrilla leader to emerge from the American Civil War.
Born in the town of Dover, Ohio in1837 he was not a Southerner and so had no direct interest in the institution of slavery, though he expressed strong views on the matter – he fought for the South as a matter of choice.
A turbulent early life when he often found himself in trouble followed him into adulthood where he earned a reputation as a a man of quick temper and violent mood swings and it seems that as a young man he was found guilty of murder following an altercation but the verdict was later overturned on appeal.
Following his brush with the law he appeared to calm down a little and found a steady job working as a teacher for the United States Army in Utah. He later resigned his post and tried to make a living as a professional gambler but in this he was unsuccessful and so returned to teaching moving to the town of Lawrence in Missouri but it wasn’t long before he was forced to flee after again being accused of murder and stealing the victim’s horse. He strenuously denied any involvement in the crime insisting that Lawrence as a strongly abolitionist town had only accused him of the crime because of his pro-slavery views. It was a stain on his character and he would neither forgive nor forget. 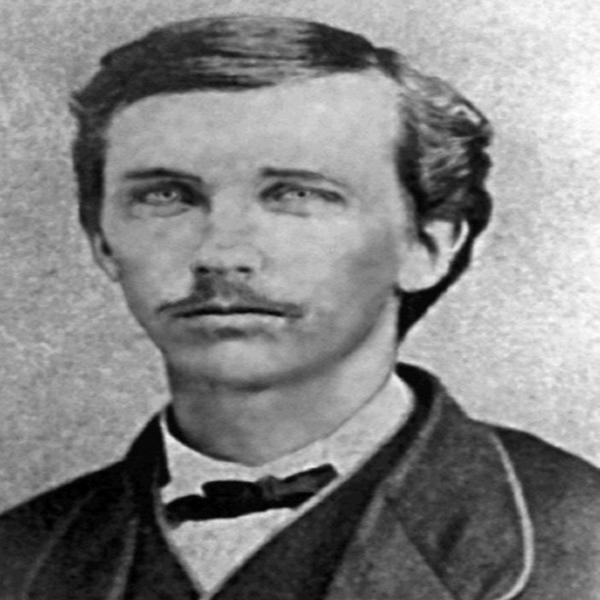 He often expressed his hated of Free Soilers, or those who wanted the Border States of Kansas and Missouri to remain slave so it was unsurprising that upon the outbreak of the Civil War he joined the Missouri State Militia; but he soon found that army discipline was not for him and so left to form his own band of Southern Bushwhackers.
While recruiting for his guerrilla band he claimed to be a native of Maryland to both bolster his Southern credentials and explain his Northern accent. Among those who now flocked to his banner were Frank and Jesse James and Cole Younger and his brothers who were later to form the notorious James Gang while one of his best scouts was a freed slave by the name of John Noland.
Quantrell was to create the most ruthless and effective guerrilla band of the entire war operating mostly on the Kansas-Missouri border and although he was a leader of Irregular Forces he did in fact receive a Commission in the Confederate Army as a Captain of Partisan Rangers something he took great pride in and was quick to use should anyone question his authority. Neither was Quantrell some bandit out for personal gain but a true believer who took the war very seriously adapting standard military tactics for guerrilla warfare: he meticulously pre-planned his attacks mapping out his routes of advance and securing his lines of retreat. He effectively dispersed his forces synchronising when they should unite, depart, and reunite again. He established relays of horses should a quick getaway be required, and he armed his men with long-barrelled revolvers for improved accuracy and trained them in concentrated fire for greater effectiveness.
Quantrell’s Raiders focused their attacks on mostly civilian targets robbing trains and stage coaches, fire-bombing homes, and destroying farms his aim to drive all pro-Union men and known abolitionists out of Kansas and Missouri. He tried to avoid contact with the Union Army where possible, though in early 1863 he did ambush 100 Union soldiers at Baxter Springs killing 65, including those already wounded, before stripping and mutilating the bodies as an example to others.
Many Senior Officers within the Confederate Army openly expressed their disgust at the behaviour of Quantrell and his like but not all. General Joseph O Shelby in command of the ‘Iron Brigade’ of Missouri regulars certainly appreciated his presence for thousands of Union troops were diverted from other areas of operations to hunt him down, so many in fact that the Kansas-Missouri border region would become too dangerous a place for him to remain.
But first he had unfinished business and a personal score to settle with the town of Lawrence.
Lawrence was home to the anti-slavery movement in Kansas and since the beginning of the war it had become rich on Southern plunder and anti-Confederate Jayhawkers operated from within its environs. It was also the home of Senator James H Lane, a singular Southern hate-figure much reviled for his anti-slavery views and support for the forced removal of known Southern sympathisers from their homes and the confiscation of their land.
As far as Quantrell and his men were concerned Lawrence was a Northern Sodom buried deep in the heart of the Righteous South.
Earlier in the year the roof of a makeshift prison in Kansas City built to house Confederate women collapsed killing several of those incarcerated within. One of these was the sister of Bloody Bill Anderson, Quantrell’s right-hand-man. It was believed that the collapse was no accident but a deliberate act of vengeance carried out on the orders from James H Lane in Lawrence. It wasn’t difficult for Quantrell to whip his men into a frenzied mood of violent retribution though it seems likely that he’d planned the attack long before the events in Kansas City. 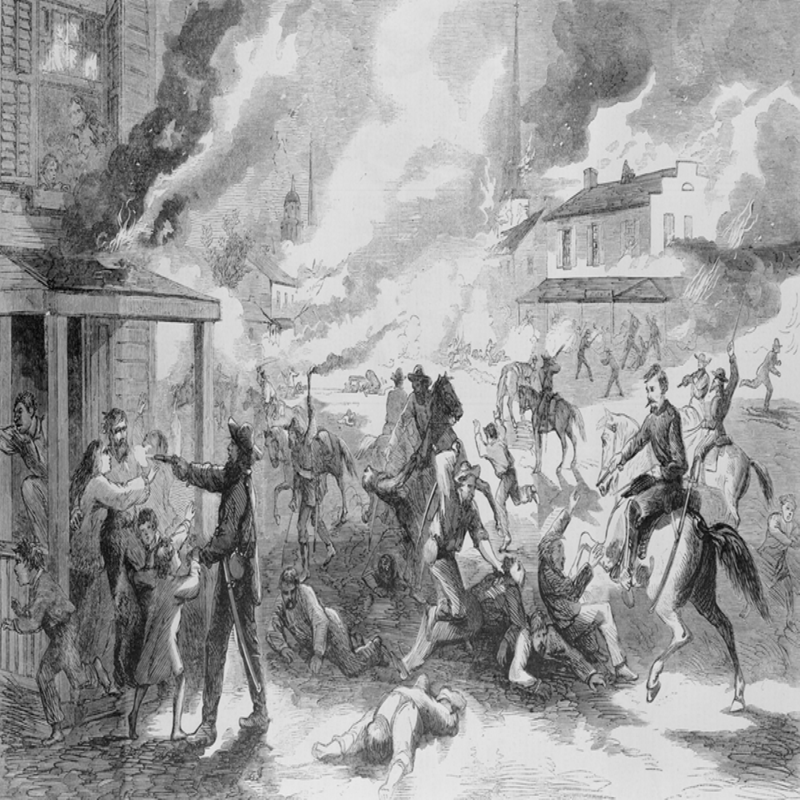 Wearing captured Union tunics in the early hours of 21 August 1863, following a forced night march Quantrell and 450 men converged on Lawrence. The attack was well coordinated as always and the few Union soldiers present were taken completely by surprise and quickly overwhelmed. Free to go about their business unhindered this would be no quick slash and burn raid and after an initial ride through the town firing their pistols, yelling at the top of their voices and burning Union flags the order was given to round up all men and boys and to kill any black man found. Terrified by the treatment of those black men either shot or hanged the women of the town now begged for the lives of their husbands and sons but to no avail - Quantrell was determined to make Lawrence suffer - the order was given and some 183 were killed in cold blood, the youngest being a boy of just 7. No women were killed though many were beaten as they tried to intervene and some may have been raoed.
Following the executions the bank was robbed, shops and homes looted, and the town put to the torch two-thirds of it being razed to the ground. Senator Lane, one of the principal targets of the attack escaped however, fleeing into anearby cornfield in his nightshirt.
In response to the attack on Lawrence, General Ewing, the local Union Commander issued General Order Number 11 which made for the forced deportation of all those living in the four border counties that were known to be pro-Confederate. Tens of thousands were forced to abandon their homes which were then burned, their crops destroyed and their livestock requisitioned for the Union Army.
With Union reinforcements flooding into the region and their support network eliminated Quantrell and his men were no longer able to sustain themselves and forced to flee to Texas. This marked the end of Quantrell’s Raiders as an effective fighting force as they now splintered into smaller groups. He fought on however, at first in combination with ‘Bloody Bill’ Anderson before leaving with 35 men to operate in Western Kentucky where he carried out a number of raids. On 10 May 1865, he was ambushed by Union troops just outside the town of Taylorsville and in the fierce fire-fight that followed was severely wounded by a gunshot wound to the chest. Although he lingered for some weeks he would never recover dying on 6 June, aged just 27.
Tagged as: Miscellaneous, War
Share this post: