Posted on 2nd March 2021
The eighteen year old Princess Alexandrina Victoria became Queen on 20 June 1837 following the death of her uncle King William IV. Her Coronation did not occur until just over a year later on 28 June 1838 however, when she journeyed in procession from her home in the recently completed Buckingham Palace in a gold coach through the streets of London to Westminster Abbey where she swore her Coronation Oath in a ceremony that lasted just over five hours.
The young Queen was to write at length about Coronation itself, its prelude and its immediate aftermath in her journal. 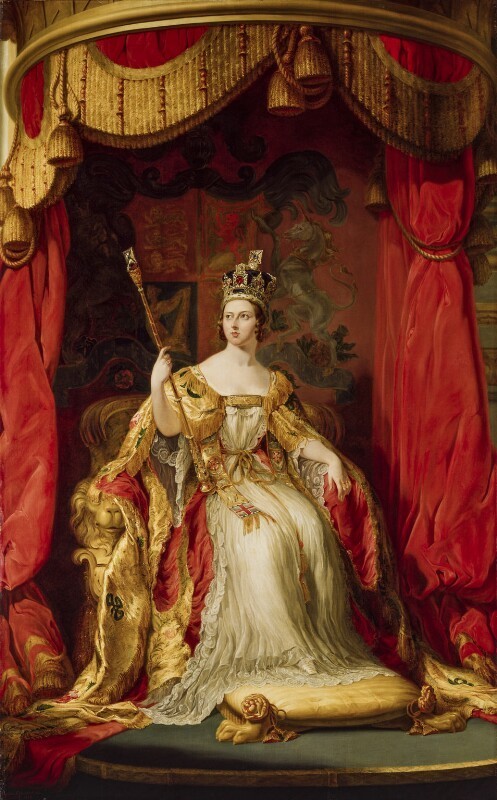 “At 4.15 pm I went with Lady Lansdowne, Lady Barham and Lady Conyngham and Colonel Wemyss to Westminster Abbey where the Duchess of Sutherland met me to see all the preparations for tomorrow. The streets were full of people and there were preparations of all kinds. I was received at the Abbey by Lord Melbourne, the Duke of Norfolk, Sir William Woods and Sir Benjamin Stevenson. All the arrangements are splendidly and very conveniently carried out. Lord Melbourne made me try the two Thrones, which was very fortunate as they were both too low.
I came home at 5 pm to great crowds in the streets, and all so friendly.
The preparations, fairs and balloons for the Coronation in the Parks quite changed the aspect of the place and the Camps of the Artillery with all their white tents had a very pretty effect. I am very glad I went to the Abbey as I shall now know exactly where I am to go and what I have to do at the Coronation.
"We, Lord Melbourne and I, spoke for a long time about the Coronation and all I had to do. I said I felt very agitated and as if something awful were going to happen to me tomorrow, at which he smiled spoke of the Bishops, and the Bishop of Durham being so remarkably awkward. Lord Melbourne. said "He is very maladroit in all those things", adding, in speaking of the Coronation, "Oh! You will like it, when you are there. I observed I was glad to think he would be near me, as then I always felt so much safer.
"I was awoke at 4 o'clock by the guns in the Park and could not get much sleep afterwards, on account of the noise of the people, bands, and crowds; got up at 7 feeling strong and well.
The Park presented a curious spectacle, — crowds of people up Constitution Hill — soldiers, bands, and cheering."
It was a fine day, and the crowds of people exceeded what I have ever seen, being even much greater than when I went to the City. There were millions of my loyal subjects, assembled in every spot, to witness the Procession. Their good humour and excessive loyalty was everything. I really cannot say how proud I felt to be the Queen of such a nation. I was alarmed at times for fear the people would be crushed, in consequence of the tremendous rush and pressure.
I reached the Abbey a little after 11.30 amidst deafening cheers. First went into a robing room quite close to the entrance, where I met my 8 Train Bearers: Lady Caroline Lennox, Lady Adelaide Paget, Lady Mary Talbot, Lady Fanny Cowpe, Lady Wilhelmina Stanhope, Lady Anne Fitzwilliam, Lady Mary Grimston and Lady Louisa Jenkinson, all dressed alike and beautifully in white satin and silver tissue, with wreaths of silver wheatears on the front of their hair and small ones of pink roses around the plait behind. There were also trimmings of pink roses on the dresser.
Then followed all the various ceremonies, ending by the Crown being placed on my head, which I must own was the most beautiful impressive moment. All the Peers and Peeresses put on their coronets, at the same instant. My excellent Lord Melbourne, who stood very close to me throughout the whole ceremony was quite overcome at this moment, and gave me such a kind, and I may say, fatherly look. The shouts, which were very great, the drums, the trumpets, the firing of the guns, — all at the same moment, rendered the spectacle most imposing.
The Archbishop had most awkwardly put the ring on the wrong finger, the consequence being that I had the greatest difficulty in taking it off again, which I at last succeeded in doing, but not without great pain.
All my Train Bearers looked quite beautiful. At about 4.30 I re-entered the State Coach, the Crown on my head and Sceptre and Orb in my hands, and we proceeded the same way as we came, the crowds, if possible, having become still greater.
The demonstrations of enthusiasm affection, and loyalty were really touching and I shall ever remember this day as the proudest in my life,
I came home at a little after 6, really not feeling too tired. — At 8 we dined, besides we thirteen, my uncle, sister, and brother Spëth and the German Gentlemen, — my excellent Lord Melbourne and Lord Surrey dining."
Tagged as: Fact File, Monarchy, Victorian
Share this post: