Posted on 1st August 2021
Rosa Luxemburg was a communist ideologue and a pacifist who would die a violent death in an armed struggle she neither wanted nor believed could succeed. It was the least she deserved said some, a case of extra-judicial murder according to others.
She was born on 5 March 1872, into a middle-class Jewish family in Zamosc, Poland, which was then part of the Russian Empire. A shy and studious young woman who not considered particularly alluring either in features or charm attracted little male attention and so un-distracted by the pursuit of love and the lifetime of domestic drudgery that would invariably follow it she turned her attention to politics, her true desire.
Outspoken and politically active from an early age she first came to the attention of the Authorities while still at school and by early 1889, and only 18 years of age, she was forced to flee Poland. 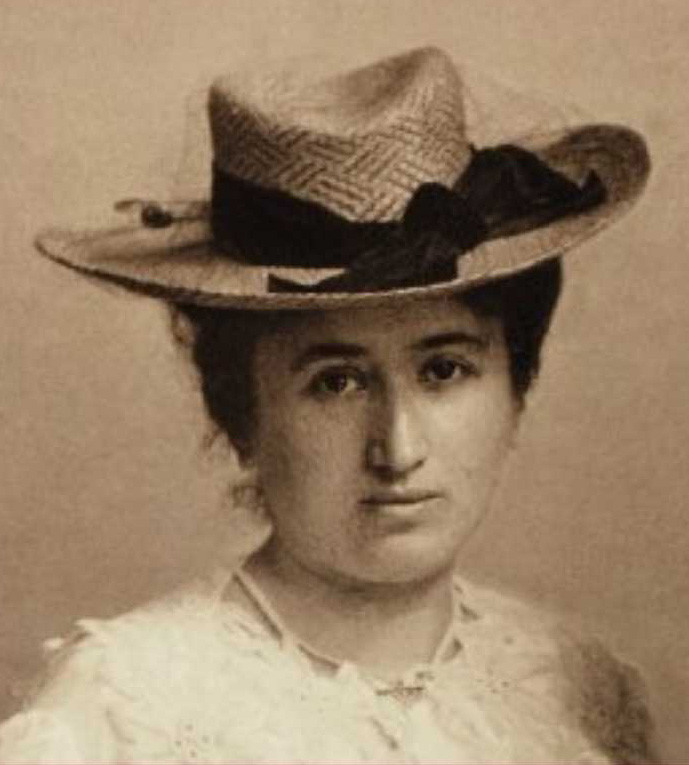 Settling in Zurich, Switzerland, the favoured destination of Europe’s revolutionary diaspora she was able, with financial support from her family, to study law and political economy at the University where through contacts she soon made the acquaintance of the local Russian emigre community which included such Marxists luminaries as Georgi Plekhanov, Pavel Axelrod, Alexandra Kollontai and Leo Jogiches.
In 1893, along with Jogiches, she formed the Social Democratic Party of Poland but unable to operate openly in Poland where it was banned, Rosa was forced to edit and publish its journal Sprawa Bobotznica or Workers' Cause from Paris and have it distributed illegally.
But often forced underground by police harassment in France and further hindered by the harsh penalties handed out to those caught distributing it in Poland it make little headway.
In 1895, Rosa married a German national, Gustave Lubeck, not for love or any reasons of affection but merely to acquire German citizenship and soon after she settling in Berlin she joined the German Social Democratic Party and became embroiled in the arguments between the ideologues who adhered to an Orthodox Marxism and no watering-down of the workers cause and those who advocated political and social reform.
Rosa sided with the hard-line Karl Kautsky in opposition to the reformer Edouard Bernstein who believed that socialism could be achieved in a democratic country without the need for revolution. Whether Germany was a democracy or not was a moot point but Bernstein believed that increased parliamentary engagement and trade union activity would be enough on its own. Rosa did not agree.
In 1905, Auguste Bebel appointed Rosa editor of the party newspaper Vorwarts! Here was the opportunity to directly influence the direction of party strategy but her appointment also coincided with the outbreak of revolution in her homeland and so, though reluctant to do so, she resigned and returned to Poland. No sooner had she arrived however than the revolution collapsed and she was promptly arrested.
Not particularly wanting yet another political radical on their hands, they had quite enough of their own the Authorities promptly deported her back to Germany. Many others were not so fortunate. 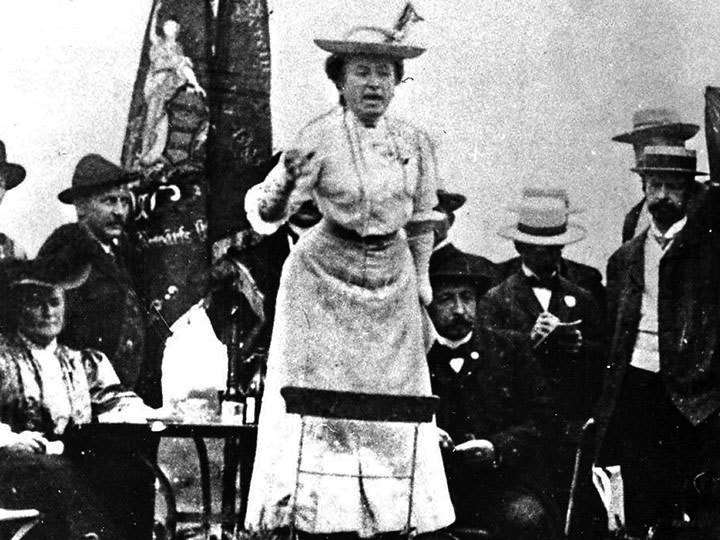 Rosa’s experiences in Poland only served to radicalise her even further and she now strongly advocated a General Strike as the spark that would lead to the violent overthrow of Capitalism. This was too extreme for the majority of her S.D.P colleagues who had gradually been moving towards the right and she now found herself both alienated from most of her fellow party members and effectively ostracised by the party leadership.
It was also around this time that she first made the acquaintance of Vladimir Illyich Lenin who was at first impressed by this physically slight but intellectually rigorous firebrand but her support for the majority Mensheviks in their dispute with Lenin over future strategy made him suspicious of her motives.
As an ardent admirer of Lenin who agreed with him on most things Rosa had expected following the Bolshevik seizure of power in Russia to be given the leading role in Poland but he had not forgotten her opposition to him many years earlier and so appointed Karl Radek instead. She was bitterly disappointed but tried not to show it.
Rosa had vehemently opposed the Great War which she saw as a struggle between competing capitalists to secure a greater market share and joined forces with the French socialist leader Jean Jaures in his attempt to form a workers bloc from among the socialist parties across Europe to prevent it. The attempt collapsed on 14 July 1914, when Jaures was assassinated whilst dining at a cafe in Paris.
It is easy then, to imagine Rosa's despair at watching the S.D.P rise almost as one to cheer the Kaiser in the Reichstag and vote overwhelmingly in favour of a War Budget. 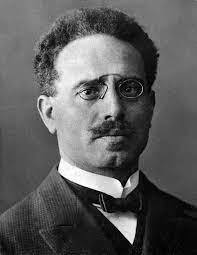 Disgusted by the turn of events she resigned and together with Karl Liebknecht, Leo Jogiches and Clara Zlatkin formed their own underground political movement the Spartakusbund, or Spartakist League. They busied themselves in opposing the war as best they could distributing often by hand anti-war leaflets, spray-painting graffiti, and trying to organise strike action.
Encouraged by a general disillusionment with the war on May Day 1916, they openly protested on the streets of Berlin and were promptly arrested. Rosa and her colleagues were released from jail during the general amnesty for political prisoners which followed the Kaiser's abdication in October 1918, and inspired by the events in Russia they swiftly formed the Kommunist Partei Deutschland (K.P.D) to fight the elections that November.
Ironically, the elections were in large part being held to forestall revolution and they were to result in the formation of the first socialist S.D.P Government.
Germany had voted overwhelmingly for the left and the K.D.P had picked up around 10% of the vote but The S.D.P was no longer a revolutionary party and had no wish to co-operate with those who wanted to see a Soviet style Government based on the Russian model.
The end of the Hohenzollern Monarchy and election of a Socialist Government had gone a little way to pacifying an impoverished and starving people even if they could do little to alleviate their pain. It was perhaps then not the time for revolution but with the British blockade of German ports still in place and no short-term prospect of the hunger coming to an end it remained there to be exploited - just not yet.
In early January 1919, a second-wave of unrest swept across Germany and the Spartakists came under pressure not only to participate but to take the lead role. Both Rosa and Karl Liebknecht were opposed believing that the conditions for revolution did not yet exist. The workers were ill-prepared, badly organised, poorly armed and would be easily crushed, they argued. But cajoled by trade unionists and radicals within their own party, with Lenin insisting upon the spread of the revolution to Germany and even the Spartakists own newspaper Red Flag demanding action they had little option but to act.
Lenin understood that the failure of communism in Germany the economic and industrial powerhouse that lay at the heart of Europe even at its moment of subjection and defeat could see the World Revolution effectively strangled at birth.
But the Spartakists had neither the support of the workers the majority of whom had voted for the S.D.P Government they were now seeking to overthrow nor the network of alliances to make revolution a reality, and both Rosa and Karl Liebknecht knew it. They could only hope to provide the spark to light the fire that would attract others to the flames – it was a forlorn hope.
Widespread disturbances had already been underway for sometime in Berlin but other than the usual agitation from party cadres little organisation had gone into them and any aims were vague other than the expression of a general discontent and the demand for food. By the time the Spartakists declared for armed revolution the anger had largely dissipated.
Calling for a General Strike and factory lock-ins that were little heeded they organised small groups of militant party members into armed combat units to erect barricades and seize key positions in Berlin such as the radio station, telegraph and post office and railway station but in this they were thwarted by police and army units.
In the meantime, the Government had reacted to the threat by despatching the Freikorps, paramilitary units made up mostly of ex-army officers and right-wing volunteers to the city. After a week of sporadic but often bloody street fighting Spartakist support began to melt away and any prospect of revolution with it. 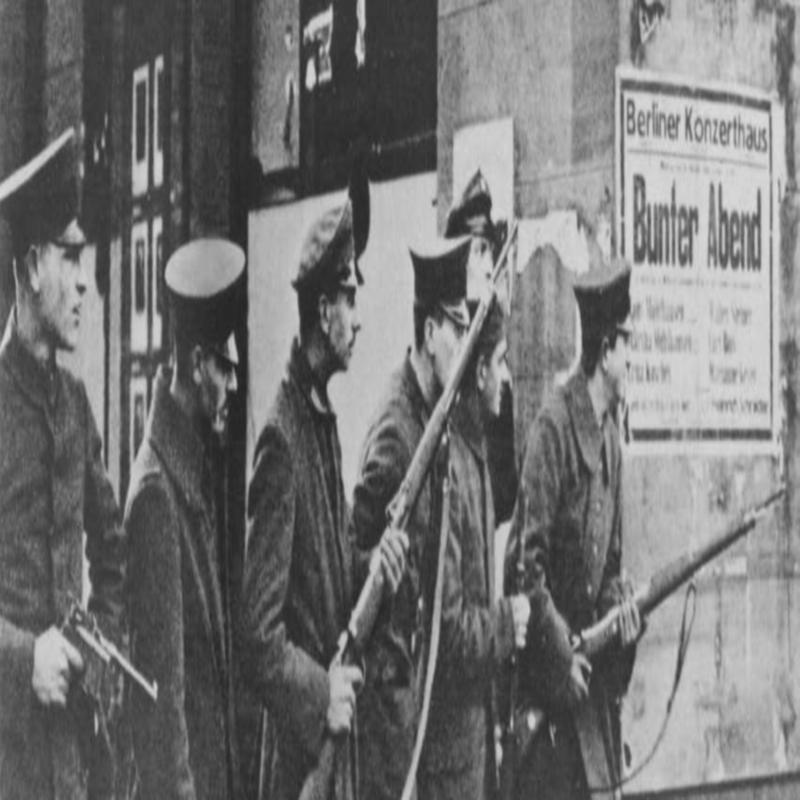 The Freikorps were now given a free-hand to restore order in Berlin and the President of the recently formed Weimar Republic Friedrich Ebert aware of the precariousness of his own position was willing to turn a blind-eye to any excesses and with no oversight in place the Freikorps roamed the streets of Berlin as de facto murder squads.
On 15 January 1919, Rosa Luxemburg and Karl Liebknecht were captured by a Freikorps unit led by Captain Waldemar Pabst who believing that it was the Left which been to blame for Germany's surrender not defeat on the battlefield had no sympathy whatsoever for communists and pacifists who he considered to be traitors.
Both Rosa and Karl were roughly treated during a short interrogation. Believing he had extracted all the information he could from them Pabst ordered their execution. Rosa was beaten around the head with a rifle butt and forced to the ground before being shot her bullet-riddled body then being thrown into the Landwehr Canal. Karl Liebknecht’s body was later discovered shot through the head in a nearby park.
Interviewed in 1962 by the German newspaper Der Spiegel, Waldemar Pabst stated that he had been ordered to execute Rosa Luxemburg and Karl Liebknect on the direct orders of President Ebert and the Defence Minister Gustave Noske, an ex-pupil of Rosa's.
This has to be taken with a pinch of salt given Pabst’s well-established far-right connections and his willing boast in years to come that he alone had been responsible and that as a Jew he had wanted Rosa beaten to death not shot.
If this is true however, and it was the case that an attempt to prosecute Pabst for the murders was later quietly shelved, then their execution had been ordered by those they would previously have considered to be colleagues and friends.
They were perhaps not the last victims however, for it was rumoured Leo Jogiches was later murdered whilst trying to track down Rosa's killers and bring them to justice
Tagged as: Modern, Women
Share this post: