Posted on 6th February 2021
On 22 January 1879 a Column of British and Irregular troops encamped near the rocky outcrop of Isandlwana in South Africa were attacked by up to 20,000 warriors of the Zulu King Cetshwayo. Fierce fighting followed in what soon became a desperate struggle for survival but by 4 o'clock in the afternoon it was all over. The British Column had been wiped out and 1400 soldiers lay dead on the ground. Ten miles away the fighting could be heard at the small Mission Station of Rorke's Drift, the tiny garrison stationed there could only guess at the outcome but were at least relieved not to be involved.
Little known to them, in direct contravention of orders not to do so an Impi of 4,500 veteran warriors many of whom had been held in reserve and had not participated at Isandlwana were advancing on the Mission Station, they were eager to join the fight and their blood was up but what had been a triumphant day for the Zulu Nation would now end badly.

The Mission Station of Rorke's Drift stood on the Buffalo River that separated British held Natal from Zululand. Cetshwayo, who sought peace and did not want to inflame the situation by taking the war into British territory despite the fact that the Station had been used as a staging post and supply depot for Lord Chelmsford's three-pronged assault on the Zulu Kingdom.
The garrison at Rorke's Drift were 139 men of B Company, 24th Foot, South Wales Borderers, at the time incorporated into the 2nd Warwickshire Regiment, of whom 35 were deemed unfit to for duty and confined to their sick beds. There were also 250 African Irregulars of the Natal Native Contingent. In command was Major Henry Spalding but he had left the Mission Station around midday leaving Lieutenant John Chard of the Royal Engineers as the senior Officer present. It has been suggested that Spalding had learned of the events at Isandlwana and had decided to save himself. This cannot be proved either way but no good reason has ever been found for Spalding departing the Station when he did. 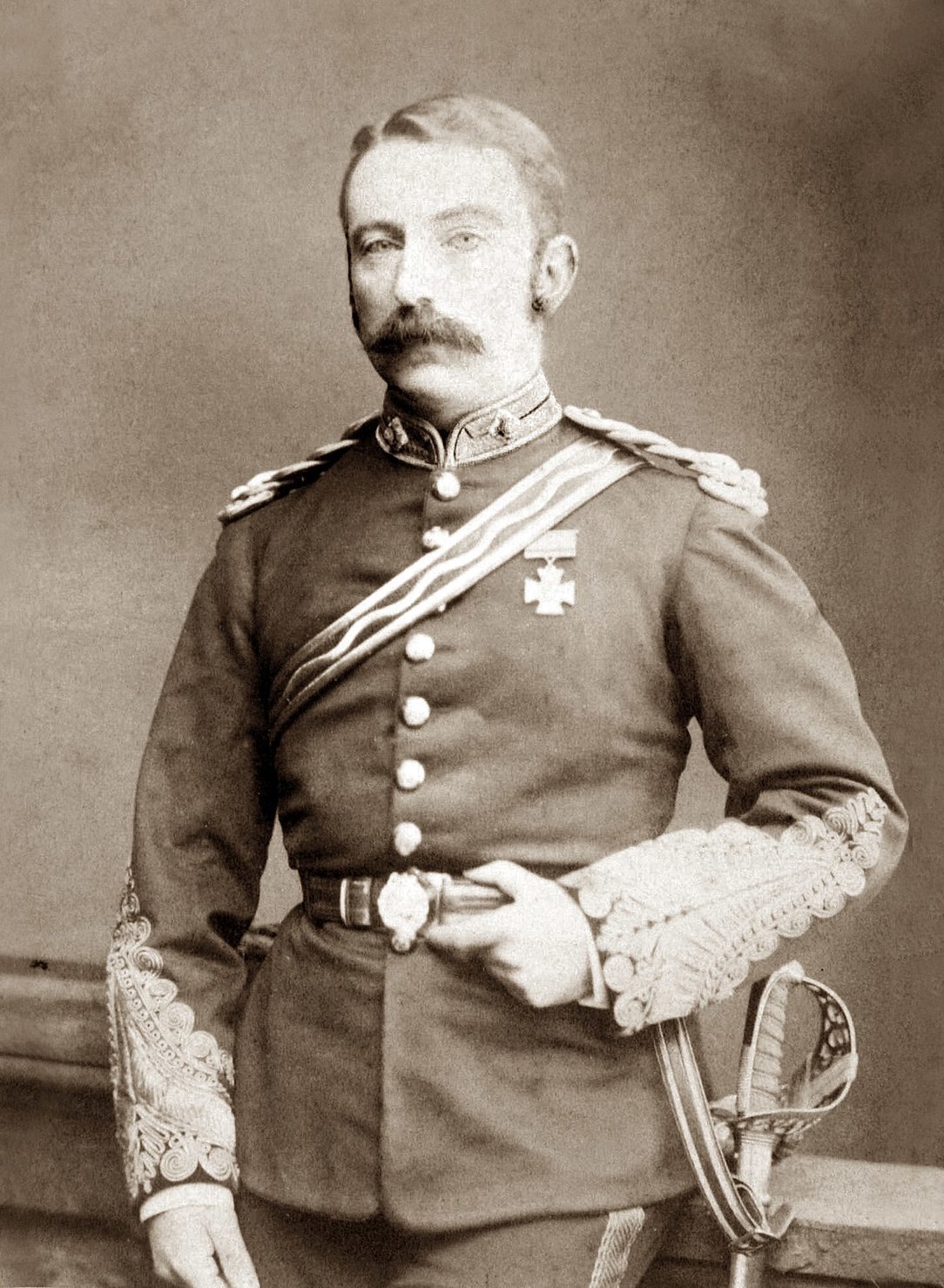 John Rouse Merriott Chard was a West Country man, having been born in Plymouth on 21 December 1847 and had been Commissioned as an Officer in the Royal Engineers on 15 July, 1868. He was viewed as a competent if uninspiring Officer who prior to his arrival in Southern Africa had never seen combat. He had been sent to Rorke's Drift to build a pontoon bridge across the Buffalo River and had earlier in the day visited the camp at Isandlwana returning just hours before the attack began.

Gonville Bromhead, who had been born in Versailles but raised in Newark, Nottinghamshire, was the scion of an aristocratic and well-established military family (his grandfather had fought alongside Wellington at the Battle of Waterloo). He was a stubborn and argumentative man and also profoundly deaf, which at least gave clarity to his obstinacy if not his hearing. He was considered by many of his fellow Officers to be a bit of a fool. Indeed, he had earlier fallen out with his Commanding Officer which was why he was at Rorke's Drift in the first place.
Chard was now promoted to a position of command ahead of Bromhead on the grounds that he had received his Commission three years earlier.
The garrison at Rorke's Drift were first informed of the disaster at Isandlwana by a Boer Officer Lieutenant Adendorff, who claimed that he had escaped the battle by the skin of his teeth, though he was later to be tried for deserting his post. Chard was to testify in his defence, though when questioned further he could not state categorically that he had seen him during fighting at Rorke's Drift either.
Reports soon reached the garrison that a Zulu Impi was advancing on the Station. Chard and Bromhead's first thought was to flee but Acting Assistant Commissary James Langley Dalton was quick to point out that having to move the sick would slow them so much that they could not hope to outrun the Zulu's and that were they to be caught in open ground they would be cut to pieces. Chard and Bromhead, between whom there was some friction, agreed. Dalton now set about trying to fortify the Mission Station. Breastworks were built out of mealy-bags and biscuit tins that connected the storage house, the chapel, the hospital, and the cattle kraal. Chard then ordered that a small redoubt should be built as a second line of defence, aware that he had so few men that he would almost certainly have to shorten his lines.
Earlier in the day the survivors of Colonel Durnford's Mounted Volunteers had arrived at Rorke's Drift. They initially agreed to position themselves in nearby hills and hold up the Zulu advance. In the meantime, Otto Witt, the Swedish Missionary whose Mission it was had returned from the Oskarberg, a hill overlooking the Station in a panic declaring that thousands of Zulus had crossed the Fugitives Drift and were just a few minutes away. His report was confirmed by Pte Frederick Hitch, who had been posted as a lookout and reported that he had seen a Zulu army some four to six thousand strong.
At 16.20 firing could be heard from the surrounding hills where Durnford's cavalry had been posted but the firing soon ceased as Durnford's men mounted their horses and fled towards the nearest town Helpmakaar despite Chard’s pleas for them to remain. They were followed shortly afterwards by the 250 men of the Natal Native Contingent, who along with their white Officers, climbed the barricades and ran away. So outraged were the soldiers that some turned their guns on them and a number were killed.
Many of the Zulu's were armed with rifles that had been taken from the dead at Isandlwana and they now began to fire down upon the defenders from the hills overlooking the Mission Station. Fortunately, they were not trained marksmen and the shooting was wayward. But this was just a precursor to the real fighting that was about to begin.
Some 600 Zulu's now attacked the South Wall that connected the storehouse to the hospital. Under a withering and sustained fire they were forced to retreat but in doing so swept around to attack the Front Wall. Here they were more successful but having reached the wall struggled to scale its breastworks. Those that did were bayoneted in a fierce hand-to-hand struggle. Corporal Christian Schiess of the Natal Native Police was seen to mount the breastworks and bayonet three Zulu's in quick succession. It was said that he was like a man possessed, who smiled, as if he was enjoying himself. Five men had died defending the South Wall and three the Front Wall. With his lines over-extended Chard decided to abandon the outer-defences and retreat to the inner-redoubt. 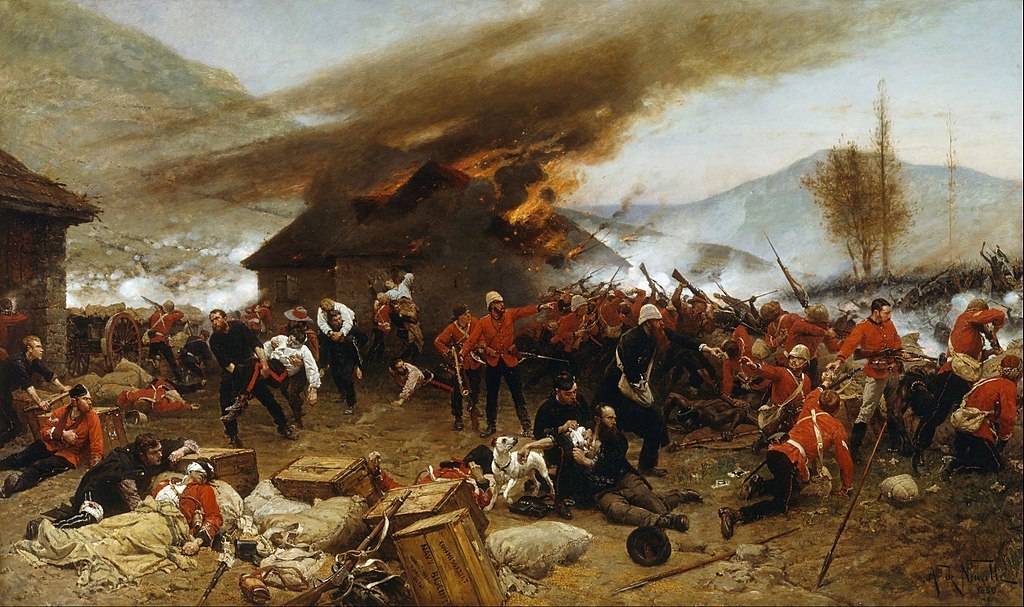 As night fell the hospital came under sustained attack and with the roof ablaze it had to be abandoned and the priority became evacuating as many of the patients as possible. Pte Joseph Williams, defending a corner of the hospital killed 14 Zulu's before he was finally overwhelmed.
Whilst Pte Joseph Williams continued to fend off the Zulu's, Pte John Williams had been busy hacking holes in the walls that divided one room of the hospital from another. He dragged two patients out the others were speared. In the second room he evacuated the patients as Pte Henry Hook held off the on-rushing Zulu's. The fighting in the hospital was fierce and close-up and Pte's Beckett and Cole were killed. The hospital was now a fireball and close to collapse. The surviving patients were led out by Pte's Robert Jones, William Jones, and Thomas Waters. The last to leave was Pte Henry Hook. Six men were killed in the fight for the hospital.By 22.00 the hospital had been destroyed, the cattle kraal abandoned, and the defenders of Rorke's Drift were positioned in a small area around the Storehouse. The Zulu's continued to attack throughout the night but made little headway. Around midnight Lt Bromhead left the redoubt to lead an audacious attack that retrieved some desperately needed water from behind Zulu lines.
As the night wore on the attacks began to decrease in their ferocity and by 02.00 had ceased altogether, though the Zulu's kept up a sustained fire on the British redoubt. Even so, the defenders were relieved at the respite. They were exhausted after ten hours of almost continuous fighting and ammunition was beginning to run low. The Zulu's were exhausted also and had taken heavy casualties.
As the sun rose on 23 January, there were no Zulu's to be seen except for the bodies of their dead and the wounded writhing in the early morning haze. Chard and Bromhead sent out scouts and they reported back that they could find no trace of the Zulus. The troops were ordered to stand down and breakfast was taken.
At 07.00 the Zulu's suddenly reappeared. There was a mad rush for their rifles as the British again manned their breastworks. But there was to be no further attacks, the Zulu's simply melted away. Some have since suggested that their appearance was a final tribute to a valiant foe. But this we will never know. At 08.00 the vanguard of Lord Chelmsford's army arrived at Rorke's Drift, the battle was over.
The British at Rorke's Drift suffered 17 killed and 10 seriously wounded but there were few who were unscathed. Some 375 Zulu bodies were recovered from around the breastworks and within the Mission Station itself. Many others lay dead or dying in the killing ground outside and Chard had already given the order for the wounded Zulu's to be bayoneted. 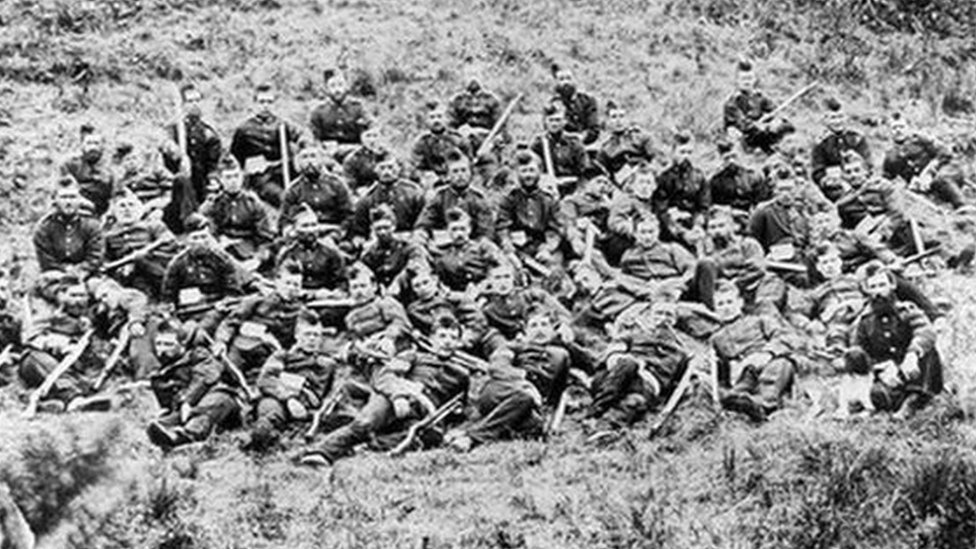 The defence of Rorke's Drift saw the highest number of Victoria Crosses ever awarded in a single engagement. It also quickly restored British prestige following the disaster earlier in the day at Isandlwana.
The 11 winners of the Victoria Cross were:
Lt John Rouse Merriott Chard: Died at home of tongue cancer on 1 November 1897, aged 49
Lt Gonville Bromhead: He died of typhoid fever while on active service in Allahabad, India, on 9 February 1892, aged 46.
James Langley Dalton (Commissariat and Transport Department) was only awarded the Victoria Cross reluctantly and only after a campaign on his behalf. He died in his sleep in Africa on 7 January, 1887.
Cpl Christian Ferdinand Schiess (A Swiss National, Natal Native Police): Fell into penury in the years immediately following the battle. In 1884 the money was raised to bring him to England but he died en-route and was buried at sea.
Cpl William Wilson Allen: died at home of influenza in 1890.
Pte Frederick Hitch: died of heart-failure in 1913.
Pte Henry Hook: died in 1905 of pulmonary tuberculosis.
Pte Robert Jones: suffered from nightmares and frequent headaches. He was often known to become hysterical and start shouting that the Zulus were coming and once had to be subdued semi-naked in the yard of his Manchester home after ordering his neighbours to flee for their lives. He committed suicide on 6 September, 1898.
Pte William Jones: ended his life penniless in the Workhouse in April 1913, having long before pawned his Victoria Cross.
James Henry Reynolds (Surgeon): died in a nursing home aged 88, in March 1932.
Pte John Williams Fielding: He was the last of the Victoria Cross winners to die in October, 1932. He had earlier had to endure the loss of his only son at the Battle of Mons in 1914.
The last surviving veteran of Rorke’s Drift was Colour-Sergeant Frank Edward Bourne. He was awarded the Distinguished Conduct Medal, the second highest award for valour in the British Army at the time after the Victoria Cross. He was to remain in the army rising to the rank of Lieutenant-Colonel. He retired in 1907, re-enlisting in 1914 upon the outbreak of World War One in a training capacity. Later in life he was made Order of the British Empire. He died in Beckenham, Kent, on 8 May, 1945, aged 91.
Tagged as: Victorian, War
Share this post: