Posted on 28th September 2021
In the late evening of 2 July 1947, numerous people reported to the police and local media outlets to having seen an unidentified oval shaped object, or at the very least a bright light, flashing across the night sky over the deserts of New Mexico. Around the same time Mac Brazel, the foreman at the Foster Ranch near the town of Corona heard a loud crash.
It may have been something crashing to the ground but it may also have been a particularly loud thunderclap New Mexico had after all been beset by severe thunderstorms in recent days; even so the following morning he decided to visit what he thought might have been a crash site where much to his surprise he did actually find debris. It was of unusual of an unusual kind to say the least so he decided to take some home with him.
Upon his return he laid the debris he had collected out on a table and showed it to his children who would normally be living with their mother in Alamagordo so they could be nearer school but were staying with him for a few days. His daughter Bessie later described what she saw:
"There was what appeared to be pieces of heavily waxed paper and a sort of aluminium like foil. Some of these had something like letters or numbers on them, but there were no words that you were able make out. Some of the metal foil had a sort of tape stuck to it, and when they were held to the light they showed what looked like pastel flowers or designs. Even though the stuff looked like tape it could not be peeled off or removed at all. The writing looked mostly like numbers and were written in columns. But they didn't look like what we use at all. It was definitely not a balloon."
On 6 July, Mac Brazel took some of the debris to the nearby town of Roswell, perhaps in the hope of getting some reward. He showed it to George Wilcox, the Sheriff of Chavez Count. Neither Brazel nor Wilcox had the slightest idea what the debris was or where it may have come from. Sheriff Wilcox thought it a good idea to contact the Roswell Air Force Base, home of the 509 Bomber Group. In the meantime, Brazel had been contacted by Frank Joyce of the local Radio Station K.G.F.L and agreed to speak to the Station about what he had found but despite the interview being conducted it was never aired.
On 7 July, Major Jessie Marcel from the Intelligence Department of the 509 Bomber Group and Sheridan Cavitt, a Counter Intelligence Officer, accompanied Brazel back to the crash site. In an interview he gave in 1978, Marcel described what he found there:
"When we arrived at the crash site it was amazing to see the vast area it covered. The debris was definitely not that of a tracking device or any sort of plane or missile. I don't know what it was but it certainly wasn't anything built by us, and it most certainly wasn't any damn weather balloon.
We recovered some small beams about three eigths or half an inch square with some hieroglyphics on them that no one could decipher. These looked something like balsa wood and were about the same weight except they were not wood at all. It was very hard although flexible, but it would not burn.
The tinfoil we found had little numbers with symbols on them, they were pink and purple and looked as if they had been painted on. I took my cigarette lighter and tried to burn the material that we found resembled parchment but it would not burn, and wouldn't even smoke.
The pieces of metal we brought back were so thin, just like the tinfoil in a pack of cigarettes. But you couldn't cut it or tear it. We even tried to make a dent in it with a sixteen pound sledgehammer, and couldn't. When we screwed it up it would immediately return to its original shape."
On 8 July, the Public Information Department at the Roswell Army Air Force Base issued a press statement confirming that debris from a crashed Flying Saucer had been recovered from the desert near the small town of Corona some 30 miles north of Roswell. It stated:
"The many rumours of a flying disc became a reality today when the Intelligence Office of the 509 Bomber Group of the Eighth Air Force confirmed that it was fortunate enough to gain possession of a disc through the cooperation of one of the local ranchers and the Sheriff's Office of Chavez County."
The local newspaper ran the story the same day and in no time at all, the story had gone national. Not long after Mac Brazel was taken into custody.
Colonel William H Blanchard, the Commanding Officer at Roswell Air Force Base now contacted his superior General Roger Ramey, who was furious about the statement that had been given to the press. He ordered that all of the remaining debris be shipped to Fort Worth in Texas immediately, and that Major Marcel was to accompany it. Once in Fort Worth, Major Marcel was ordered to take the debris to General Ramey's office where it was laid out on brown paper for the General's inspection. 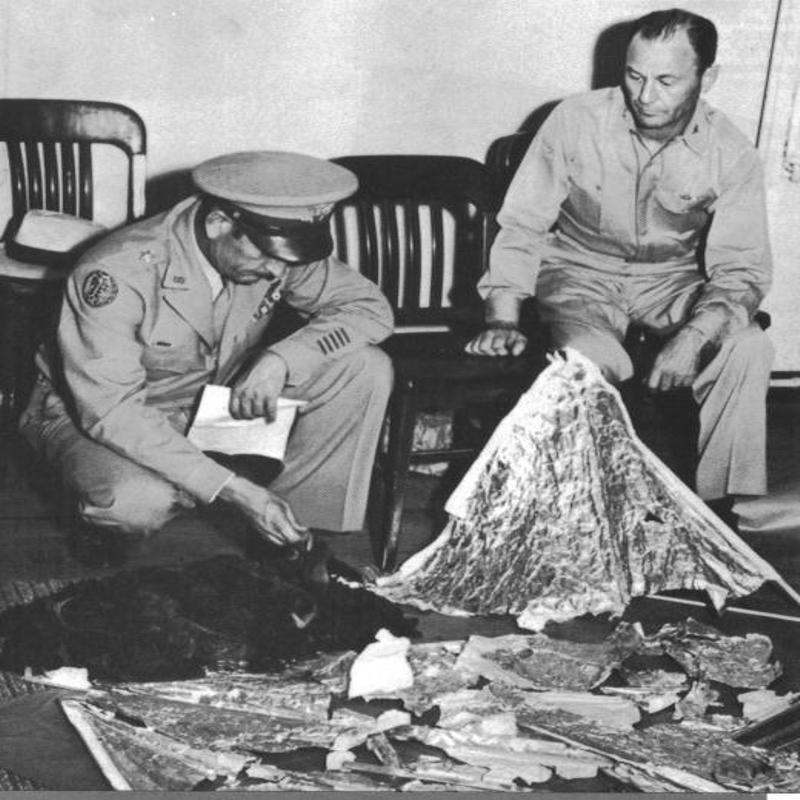 According to Major Marcel, this was then taken away and replaced with the debris from a weather balloon and a Warrant Officer, Irving Newton, was then asked to inspect it and confirm that it was indeed the remains of a crashed weather balloon. A photographer was then called in to take a picture which along with an accompanying statement denying the existence of a Flying Saucer was released to the press.
Mac Brazel, who was to remain in military custody for over a week, was taken under escort to the offices of the Roswell Daily Record where he was to provide a statement of the events leading up to his discovery of the crash site and what exactly he found there. But his recollection of events had changed from his earlier interview. When he was asked by Frank Joyce why he had changed the details of his story he replied:
"I'm sure what I found out there was no weather balloon. But if I ever find anything else beside a bomb they are going to have a hard time getting me to say anything about it." He then added, rather nervously: "It'll go hard on me."
Within ten days of the first sensational headlines that appeared to indicate the remains of a Flying Saucer had been recovered from the New Mexico desert the Military had effectively killed the story, and it was to remain largely forgotten for the next thirty years.
Interest in the Roswell Incident was reignited when in 1978 Jesse Marcel revealed in an interview that the weather balloon story had been a cover-up. This was later confirmed by Colonel Thomas E Debois, General Ramey's Second-in-Command.
Following this, and throughout the 1980's, further witnesses to the event came forward to tell their story. Reports also began to emerge that there had been a second crash site near Socorro, some 150 miles west of the Foster Ranch. Here it is claimed alien bodies had been recovered, and possibly the capture of one who was still alive. Is it possible that the entire Roswell Incident was contrived to distract attention away from the real crash site? Some certainly believe this to be the case.
Local people who out of curiosity, had been drawn to the crash site at Socorro reported having seen a number of small grey bodies. Though this could only have been seen at a distance for the site itself was surrounded by armed guards and largely cut off from the public gaze.
A Military Policeman, Elias Benjamin, described how he had been assigned to guard alien corpses and one which appeared to be still alive. These were taken to the Roswell Army Air Force Base where autopsies were conducted. Indeed, the local mortician Glenn Dennis had received an order to deliver a number of small child-sized coffins to the Base.
Witness accounts continued to leak out. It was said that Joseph Montoya, who was Lieutenant-Governor of New Mexico at the time, had been physically shaken on visiting the Base to discover four alien bodies and one that was barely alive. Miriam Bush, Secretary to the Chief Medical Officer at Roswell, also claimed to have seen alien corpses laid out for autopsy.
The pilot who had flown Jesse Marcel and the recovered debris to Fort Worth, Colonel Oliver Henderson, shortly afterwards flew a cargo plane stashed with crates or and what he described as small coffins to Wright-Patterson Airfield. This was where retrieved foreign aircraft and technologies were taken for examination.
Many of those who witnessed the events at Roswell have since claimed to have been the victims of threats and intimidation. Mac Brazel was certainly bullied into silence. Though he rarely ceased to complain of his treatment at the hands of the Military he never again spoke of what he found at the crash site. He also around the time of the incident appeared to have come into some money that allowed him to buy a brand new pick-up truck. Something he had long desired but that everyone knew he could not afford.
Officials at the Radio Station K.G.F.L complained that they had been threatened with having their licence to broadcast revoked if they refused to cease reporting the events at Roswell. Similar threats were made towards the Roswell Daily Record.
Sixty years on from that July day in 1947, we still do not know what crashed into the New Mexico desert. But we do know for certain that something did.
Inquiries have since concluded that it was most likely a surveillance balloon from a secret project codenamed Operation Mogul. But very little evidence for this, along with evidence relating to the Roswell Incident specifically, has ever been released.
We are therefore obliged to accept the findings of those who refuse to reveal the facts that underpin them.
Tagged as: Modern
Share this post: