Posted on 17th July 2021
The trial for murder of two Italian immigrants who had fled poverty and oppression in their native country only to find the same in the United State was to make headlines around the world. Indeed, they were to become a global cause celebre and the case a by-word for police corruption, political intrigue and judicial murder.
Their supporters while acknowledging they were committed anarchists believed them innocent of murder and that they were being tried as an example to others. The Authorities thought otherwise considering them dangerous men who had committed murder in the cause of violent revolution. Even to this day, their guilt or innocence remains un-established to any certain degree. 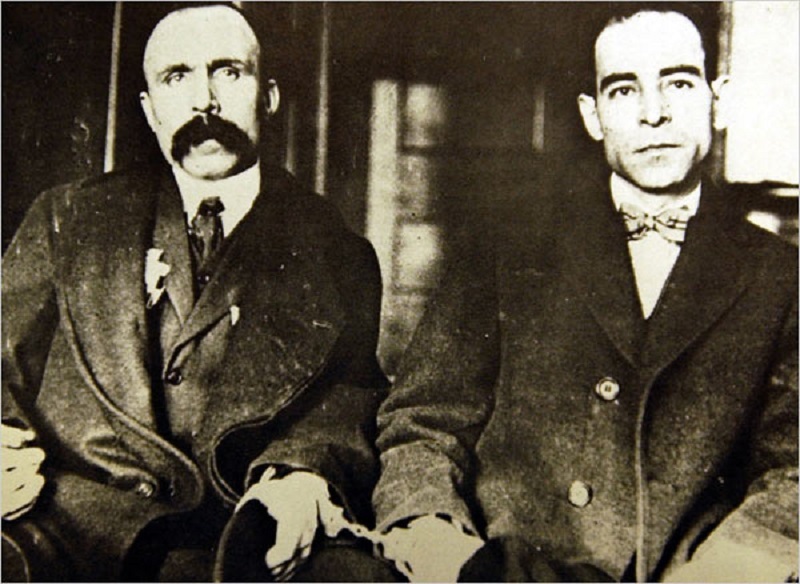 Ferdinando Nicola Sacco was a cobbler born in Foggia in 1891, who had emigrated to the United States, aged just 17. He never truly mastered the English language but absorbed into the Italian-American community as he was never really felt the need to do so.
Bartolomeo Vanzetti was a fishmonger from Villafalletto who like Sacco had fled Italy aged 20, in the hope of a better life.
The two men likely met at one or other of the various anarchist meetings they both attended and In 1917 fled to Mexico together to avoid the draft for the Great War. This was to play heavily against them at their trial when they were accused of being unpatriotic and unwilling to fight for their adopted country. The fact they were anarchists and therefore anti-war was not considered an excuse for their actions but merely as further evidence that they were some kind of alien species that was essentially un-American.
On 15 April 1920, in Braintree, Massachusetts, a payroll clerk Frederick Parmenter, and a security guard, Alessandro Berardelli, were delivering a payroll of $15,776 to the Slater Morill Shoe Company when they were robbed and shot dead. It was a brutal and unnecessary murder as neither Parmenter nor Berardelli were armed and able to defend themselves.
The police traced the car they believed had been used in the robbery and staked out the garage in Brockton where it was being kept. On 5 May, Sacco and Vanzetti, along with Mario Buda who was the anarchist leader Luigi Gallieni's bomb-maker and another as yet unknown man arrived at the garage to pick up the car. As they did so the police sprung their trap. Buda and the unknown man escaped on a motorcycle but Sacco and Vanzetti were not so fortunate. They fled the scene but were arrested soon after boarding a streetcar. They gave themselves up without a struggle.
Both Sacco and Vanzetti were found to be armed and in possession of anarchist literature, Sacco also had shotgun shells in his possession that were similar to those that had been used in the crime. As neither of them had criminal records they were to that point unknown to the police. 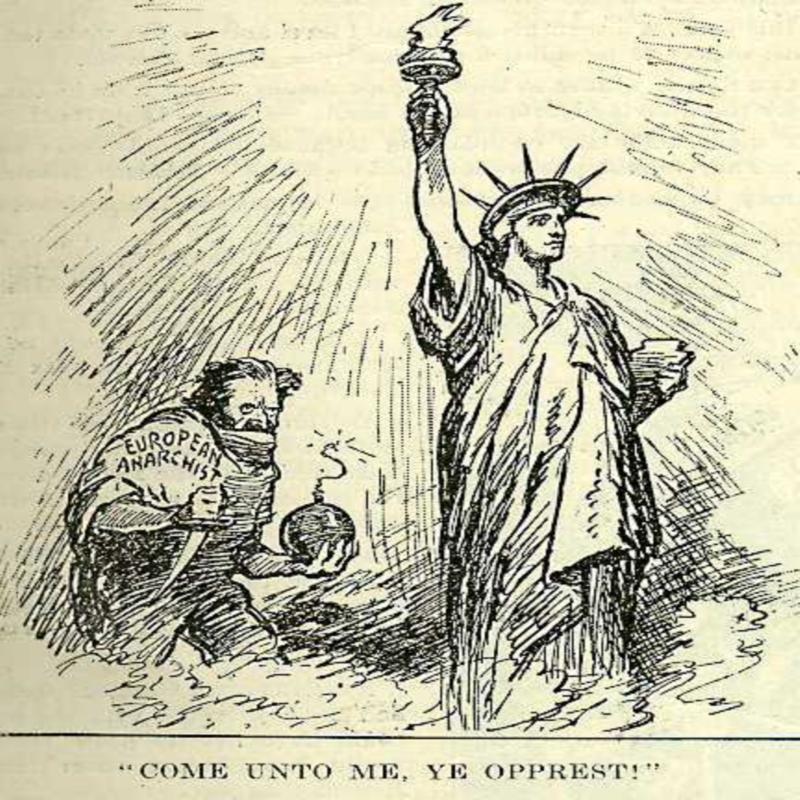 The brutal attack on two unarmed men delivering the payroll to a Shoe Factory occurred at the height of the “Red Scare” in America, a time when the mass-immigration of previous years was impacting the major cities and a sense of paranoia prevailed. But it was not without cause.
In July 1916, a bomb had exploded during a parade in San Francisco killing 10 people, a Milwaukee Police Station was blown up killing 9 Police Officers; a mass poisoning of business leaders at a dinner in Boston was attempted, and over the next two years there were bomb attacks in Washington, New York, Boston and many other cities.
These attacks were carried out for the most part by recent immigrants to the country, many were Italian, and this was a fact not lost on the American people or the press.
Charged with the murders at Braintree both Sacco and Vanzetti pleaded their innocence claiming that they were victims of social and political prejudice and there is little doubt that the presiding Judge at the subsequent trial Webster Thayer, guided the jury towards a guilty verdict. He had requested the job of presiding at the trial and reportedly told the jury: "This man (Vanzetti) although he may not have committed the crime attributed to him, is nevertheless culpable because he is the enemy of our existing institutions". There is no evidence of this in the Court transcripts, however. 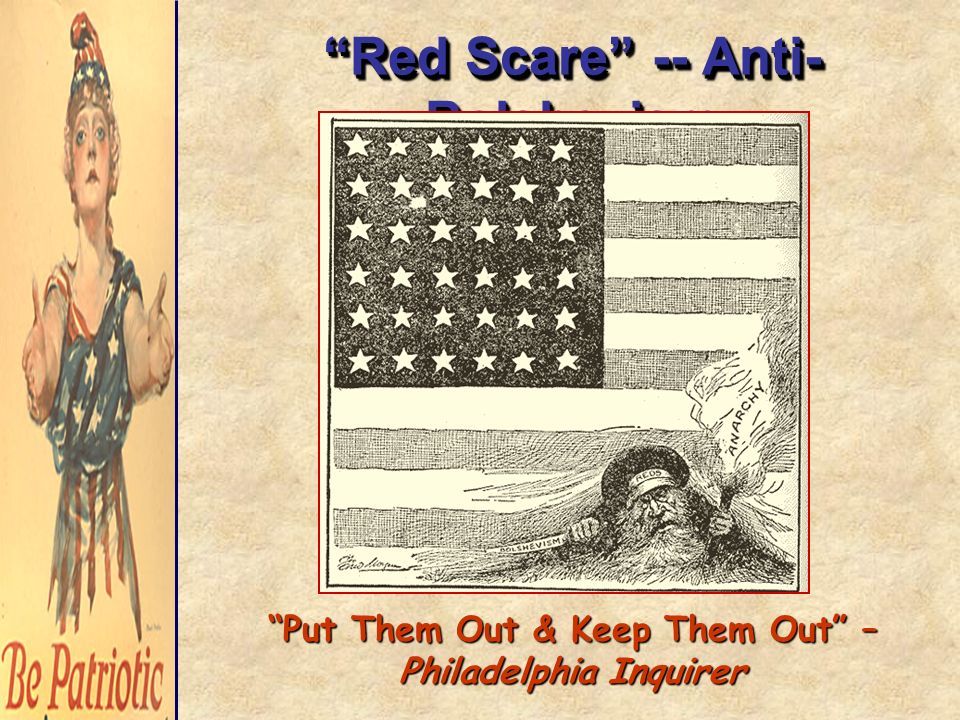 Both Sacco and Vanzetti were committed anarchists something neither denied, and they were known associates of Mario Buda. Nor were they to disavow their belief in violence as a legitimate tool with which to oppose oppression.
At the time of their arrest both men lied to police fearing that they would be deported as political undesirables, as indeed Gallieni had been in 1919. This initial false testimony would seriously prejudice their case later.
Vanzetti testified that at the time of the robbery he had been selling fish and witnesses were produced who confirmed that they had indeed bought fish from him that day but as they were all Italian their testimony was treated with scepticism.
Sacco claimed that he had been in Boston trying to obtain a passport from the Italian Consulate, and their Defence Attorney Fred Moore, whom Judge Thayer had already described as a "long-haired Californian Radical", managed to track down the clerk who had dealt with Sacco's application, but he had since returned to Sicily and refused to attend the trial to testify claiming ill-health.
Sacco also claimed to have had dinner with friends whilst in Boston and these friends were produced as witnesses, but yet again they were Italian and simply not believed.
The ballistic evidence produced by the Prosecution was also equivocal, inconsistent and flawed. They claimed that the calibre of Sacco's gun was so obsolete that only the ammunition found on his person could possibly have been fired from it. Yet only one of the four bullets recovered from the body of the security guard, Alessandro Berardelli, anywhere near matched the calibre of Sacco's gun. Again, Vanzetti's revolver was a .38 calibre the bullets found at the scene were from a .32 calibre gun.
The Prosecution however claimed that Vanzetti had wrested the security guard's gun from his person and then shot him in cold blood but Berardelli had sent his gun for repair and was unarmed on the day of the robbery. Indeed, his wife declared that if only her husband had retrieved his gun from the repair shop that day he might still be alive.
There seemed to be little evidence that linked either Sacco, and in particular Vanzetti, directly to the crime. The most substantial piece of evidence the Prosecution had was Sacco's cap found at the scene. Yet when he tried it on in Court it was too small for him.
The eyewitness accounts of the crime were also varied and inconclusive. Some placed Sacco and Vanzetti at the scene others did not, some later recanted their witness statements, other’s later recanted their recantations. Yet after just three hours of deliberations the jury returned a guilty verdict.
Given the contentious and inconclusive evidence everyone was shocked at the speed of the verdict and the press now had a field day with the reports that were being leaked from the Court. Supposed remarks made by Judge Thayer such as "Did you see what I did to those anarchist bastards today", and "I will get them good and proper", were widely circulated. Even the Chairman of the Jury was believed to have said "Damn them, they should hang anyway". 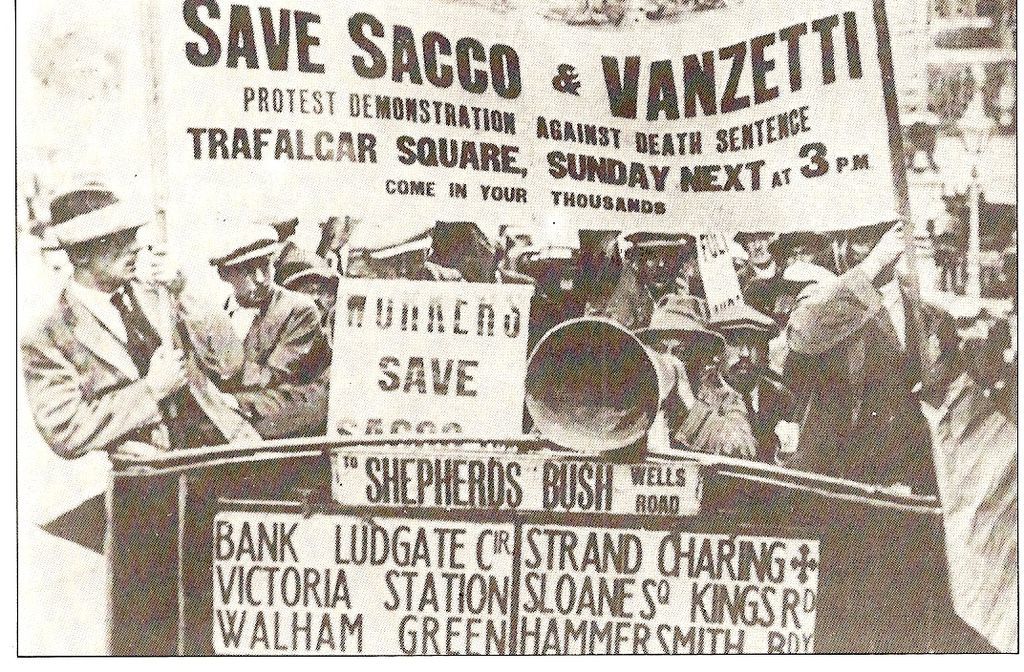 Sacco and Vanzetti were to become cause celebres with such eminent people as H.G Wells, George Bernard Shaw and Dorothy Parker voicing their concern at the verdict. Defence Committees were formed to gather funds and demand a retrial and demonstrations were held around the world. Two further appeals were indeed held but the verdict remained unchanged and both Sacco and Vanzetti were sentenced to die in the electric chair.
Whilst in prison awaiting execution, Sacco was told by a gangster Celestine Medeiros (who was also awaiting execution for an unrelated crime) that he had been a member of the gang that had committed the robbery and that he was willing to testify that neither he nor Vanzetti had been present. The fresh evidence was passed onto Judge Thayer but he refused to hold another re-trial based on the testimony of a convicted murderer.
Both Sacco and Vanzetti were to talk at great length about their lives during their many years of incarceration. Sacco perhaps less so due to his fractured English but he was heard to remark: "True, they can execute the body but they cannot execute the idea which is bound to live".
Vanzetti was more eloquent about what had transpired. He said: "I would not wish on any of them what I have had to suffer for things I am not guilty of. But I have suffered for things I am guilty of. I am suffering because I am a radical, and I am indeed a radical. I have suffered because I am an Italian, and I am indeed an Italian. If you could execute me two times, and I could be reborn two times, I would still live again to do what I have done".
Niccola Sacco and Bartolomeo Vanzetti were executed on 23 August 1927.
They met their deaths with equanimity and a sense of long endured resignation. Vanzetti shook hands with his gaolers and thanked them for their kindness. His final words were:"I wish to forgive some people for what they are doing to me". Sacco blurted out in his native Italian: "Viva I'anarchia! Ciao Mia Madre".
Liberal opinion around the world which had been shocked at the verdict was now outraged at the severity of the punishment. Petitions of condemnation were signed, politicians spoke out and the liberal press savaged the American judicial system. Others reacted even more strongly, in Buenos Aires the Headquarters of Citibank were bombed as also was the Bank of Boston and an attempt was also made upon the life of President Hoover.
The wife of Niccola Sacco wrote to the man believed to have been behind the bombings, Severino di Giovanni, thanking him for his efforts on her husband's behalf.
Upton Sinclair, the socialist author and politician who had been a prominent and outspoken supporter of Sacco and Vanzetti recalled meeting their Defence Attorney Fred Moore following their execution. He wrote: "Alone in a hotel room with Fred, I begged him to tell me the full truth. He then told me that the men were guilty, and told me in every detail how he had framed a set of alibis for them. I faced the most ethical problem of my life. I had come to Boston with the announcement that I would write the truth about the case". But Upton Sinclair doubted the credibility of Moore's statement. He had been told that he (Moore) was addicted to drugs.
In 1941, the anarchist Carlo Tresca, who had been a member of the Sacco and Vanzetti Defence Committee, stated that Sacco was guilty but that Vanzetti was not. Mario Buda, also later claimed that Sacco had been present. In 1952, the labour leader Anthony Ramuglia, said that he had been asked to provide a false alibi for Sacco by Fred Moore.
In 1982, a letter emerged written by Giovanni Gambera, one of the four anarchists who had organised their defence stated that everyone within the anarchist inner-circle knew that Sacco was guilty.
There appears to be little doubt that the Sacco and Vanzetti case ended in an unsafe conviction but this of itself is not proof of innocence. Their politics, their advocacy of propaganda by deed and in particular their association with Mario Buda casts a dark shadow over any presumption of innocence.
Hence when in 1977, Michael Dukakis, the Governor of Massachusetts, declared that:"Any stigma and disgrace should be forever removed from the names of Niccola Sacco and Bartolomeo Vanzetti”. No pardon followed.
Tagged as: Modern
Share this post: