Posted on 1st October 2021
On 29 May 1453, the great Byzantine city of Constantinople, capital of the Roman Empire in the East fell to the Ottoman Army of the Sultan Mehmed II.
With little or no assistance from the Western Powers other than courageous volunteers from City States such as Genoa and Venice it had held out for 53 days; but Mehmed was in no mood to be generous to an heroic adversary and for three full day he gave his troops licence to loot, burn, rape and murder until the slaughter became to much even for him. 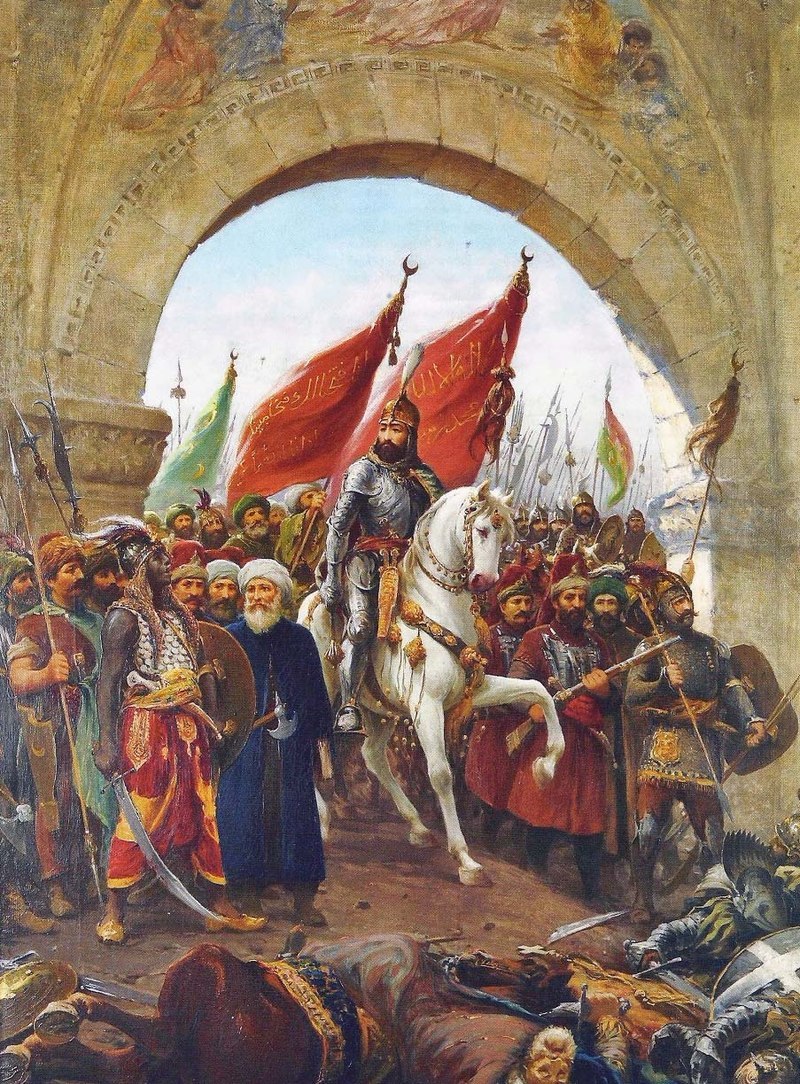 This is an account of events witnessed at the time and later recorded for posterity:
"Nothing will ever equal the horror of this harrowing and terrible spectacle. People frightened by the shouting ran out of their houses and were cut down by the sword before they knew what was happening. And some were massacred in their houses where they tried to hide, and some in churches where they sought refuge. The enraged Turkish soldiers gave no quarter.
When they had massacred and there was no longer any resistance, they were intent on pillage and roamed through the town stealing, disrobing, pillaging, killing, raping, taking captive men, women, children, old men, young men, monks, priests, people of all sorts and conditions . . . There were virgins who awoke from troubled sleep to find those brigands standing over them with bloody hands and faces full of abject fury. This medley of all nations, these frantic brutes stormed into their houses, dragged them, tore them, forced them, dishonoured them, raped them at the cross-roads and made them submit to the most terrible outrages. It is even said that at the mere sight of them many girls were so stupefied that they almost gave up the ghost.
Old men of venerable appearance were dragged by their white hair and piteously beaten. Priests were led into captivity in batches, as well as reverend virgins, hermits and recluses who were dedicated to God alone and lived only for Him to whom they sacrificed themselves, who were dragged from their cells and others from the churches in which they had sought refuge, in spite of their weeping and sobs and their emaciated cheeks, to be made objects of scorn before being struck down. Tender children were brutally snatched from their mothers' breasts and girls were pitilessly given up to strange and horrible unions and a thousand other terrible things happened. . .
Temples were desecrated, ransacked and pillaged . . . sacred objects were scornfully flung aside, the holy icons and the holy vessels were desecrated. Ornaments were burned, broken in pieces or simply thrown into the streets. Saints' shrines were brutally violated in order to get out the remains which were then thrown to the wind. Chalices and cups for the celebration of the Mass were set aside for their orgies or broken or melted down or sold. Priests' garments embroidered with gold and set with pearls and gems were sold to the highest bidder and thrown into the fire to extract the gold. Immense numbers of sacred and profane books were flung on the fire or tom up and trampled underfoot. The majority, however, were sold at derisory prices, for a few pence. Saints' altars, tom from their foundations, were overturned. All the most holy hiding places were violated and broken in order to get out the holy treasures which they contained . . .
When Mehmed II saw the ravages, the destruction and the deserted houses and all that had perished and become ruins a great sadness took possession of him and he repented the pillage and all the destruction. Tears came to his eyes and sobbing he expressed his sadness. 'What a town this was! And we have allowed it to be destroyed'! His soul was full of sorrow. And in truth it was natural, so much did the horror of the situation exceed all limits."
Tagged as: Fact File
Share this post: