Posted on 8th June 2021
In January 1692, witchcraft came to the town of Salem in Massachusetts, or so it was believed.
A number of young girls had been exhibiting strange behaviour; they would go into a trance, they would become hysterical and when questioned they claimed to be possessed by demonic spirits and that there existed a witches coven in Salem; and they named those involved one of whom was a black known as Tituba, who when interrogated appeared to confirm the girls story.
In March they accused the elderly Martha Corey of being a witch but unlike the other women already under suspicion ‘Goodwife’ Corey was of unimpeachable character, an upstanding member of the Congregation. 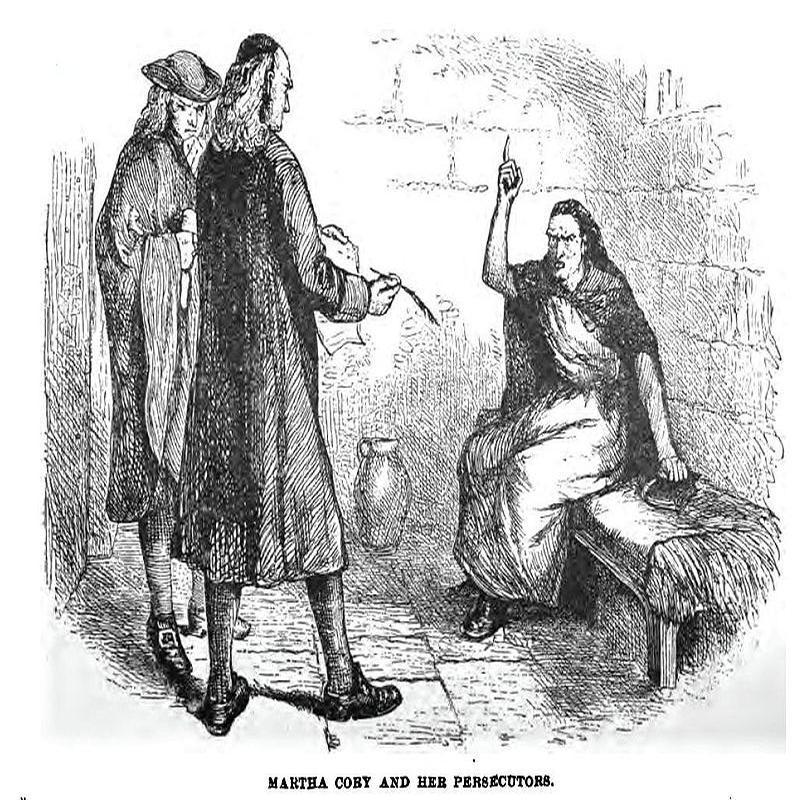 Questioned by investigators she dismissed the accusation with contempt and no little sarcasm – she was innocent of such nonsense. But others were not so convinced and she was summoned to appear in Court.
The Reverend Deodat Lawson witnessed events:
“On, Monday, the 21st. of March, the magistrates of Salem appointed to come to examination of Goodwife Corey. And about twelve of the clock they went into the meeting house, which was thronged with spectators. Mr. Noyes began with a very pertinent and pathetic prayer, and Goodwife Corey being called to answer to what was alleged against her, she desired to go to prayer, which was much wondered at, in the presence of so many hundred people. The magistrates told her they would not admit it; they came not there to hear her pray, but to examine her in what was alleged against her. The worshipful Mr. Hathorne asked her why she afflicted those children. She said she did not afflict them. He asked her, 'Who did then?' She said, 'I do not know; how should I know?'
The number of afflicted persons’ were at the time ten, four married women: Mrs. Pope, Mrs. Putnam, Goodwife Bibber, and an ancient woman named Goodall; three maids - Mary Walcut, Mercy Lewes, at Thomas Putnam's, and a maid at Dr. Griggs's; there were three girls from nine to twelve years of age, each of them, or thereabouts, viz. Elizabeth Parris, Abigail Williams, and Ann Putnam.
These were most of them at Goodwife Corey's examination, and did vehemently accuse her in the assembly of afflicting them, by biting, pinching, strangling, etc; and that they did in their fit see her likeness coming to them, and bringing a book to them. She said she had no book. They affirmed she had a yellow bird that used to suck betwixt her fingers; and being asked about it, if she had any familiar spirit that attended her, she said she had no familiarity with any such thing, and was a gospel woman, which title she called herself by. And the afflicted persons told her ah, she was a gospel witch.
Ann Putnam did there affirm that one day when Lieutenant Fuller was at prayer at her father's house she saw the shape of Goodwife Corey and she thought Goodwife N, praying at the same time to the Devil. She was not sure it was Goodwife N. she thought it was, but very sure she saw the shape, of Goodwife Corey.
The said Corey said they were poor, distracted children, and no heed to be given to what they said. Mr. Hathorne and Mr. Noyes replied it was the judgment of all present they were bewitched, and only she, the accused person, said they were distracted.
It was observed several times that if she did but bite her underlip in time of examination, the persons afflicted were bitten on their arms and wrists and produced the marks before the magistrates, ministers, and others.
And being watched for that, if she did but pinch her fingers, or grasp one hand hard in another, they were pinched, and produced the marks before the magistrates and spectators.
After that, it was observed that if she did but lean her breast against the seat in the meeting house (being the bar at which she stood), they were afflicted.
Particularly Mrs. Pope complained of grievous torment in her bowels as if they were, torn out. She vehemently accused said Corey as the instrument, and first threw her muff at her, but that not flying home she got off her shoe, and hit Goodwife Corey on the head with it.
After these postures were watched, if said Corey did but stir her feet, they were afflicted in their feet, and stamped fearfully.
The afflicted persons asked her why she did not go to the company of witches which were before the meeting house mustering. Did she not hear the drum beat? They accused her of having familiarity with the Devil, in the time of examination, in the shape of a black man whispering in her ear.
She denied all that was charged upon her, and said they could not prove her a witch.
She was that afternoon committed to Salem prison; and after she was in custody, she did not so appear to them and afflict them as before.
Martha Corey, aged 72, was convicted of being a witch and hanged on 22 September 1692.
Tagged as: Fact File, Miscellaneous
Share this post: