Posted on 28th April 2021
Walter Raleigh was an explorer, a soldier, a poet and a hero. He was a great adventurer of the Golden Age of Elizabeth but he was also a pirate and a braggart who would die on the scaffold accused of treason.
He was born on 22 January 1552 near Budleigh Salterton in Devonshire the youngest of five boys three of whom were his half-brothers from his mother Catherine Champermowne's previous marriage. It was a happy childhood much of it spent outdoors and on the water where he learned many of the seafaring skills that would later serve him so well. 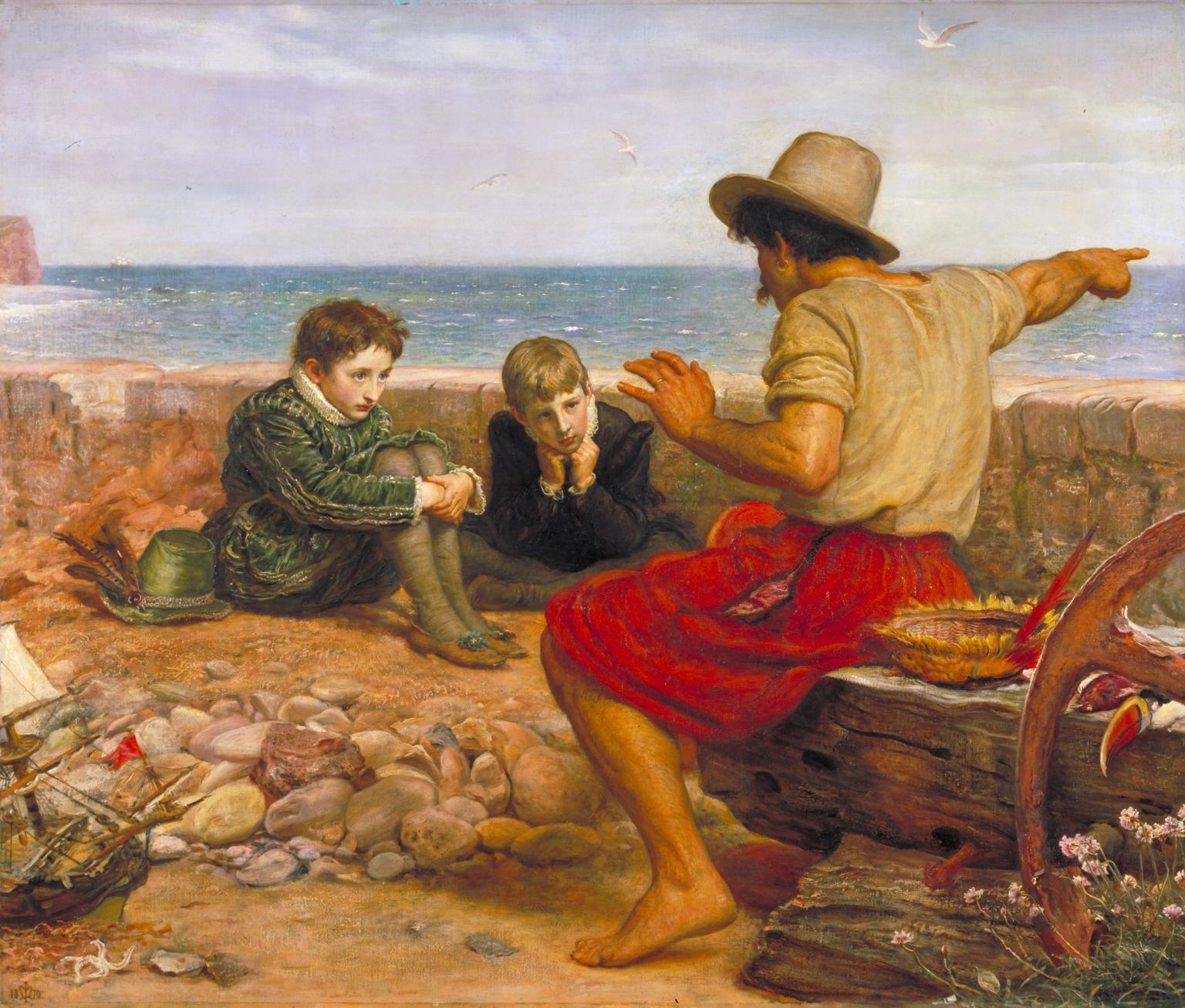 Although his family were wealthy landowners and influential locally they were also committed Protestants who had feared for their lives during the reign of the Catholic Queen Mary especially when their close friend Agnes Prest was burned at the stake in Exeter for practising her Protestant faith and at one point Walter's father was forced to go into hiding to avoid suffering a similar fate. So from early in life the young Walter developed a life-long hatred of Roman Catholics.
Despite the family's wealth they had little social standing but did have a connection to the Royal Court through Walter's mother who was the niece of Kat Ashley, Governess to the future Queen Elizabeth I.
In 1568 at the age of sixteen, Walter was registered as an undergraduate at Oxford University though he never attended. Likewise in 1575 he was down to study law at the Middle Temple but never attended that either. Despite his family's best efforts it seemed impossible to tie the young Walter down to a profession and it appears that for much of the time he was actually serving as a soldier of fortune on the Continent.
By 1579 he was in Ireland where he helped to crush the Desmond Rebellion which opposed the Protestant English presemce in the country.
On 12 September 1580, 600 Italian troops who had been sent by the Pope to help in the rebellion were forced to surrender at Dunan Oir. Disarmed they were summarily put to death and Walter Raleigh was present killing it was said a great many of them. It seems years of pent up hatred of Roman Catholicism was unleashed in an orgy of violence.
Raleigh was richly rewarded for his loyal service in Ireland being granted estates of more than 40,000 acres and was to become one of the wealthiest landowners in the newly established colony of Munster though by all accounts a deeply unsympathetic and unpopular one.
His seventeen years as an Irish landowner were not particularly profitable ones. He had little head for business though he is credited with having introduced the potato into Ireland. He did however, become close friends with another Englishman who had profited greatly from the colonisation, the poet Edmund Spenser who encouraged him in his own literary pursuits and introduced him to a great many influential people.
In truth, Raleigh had little interest in being a landowner though his estates did provide him with the money to pursue his seafaring activities. There were great rewards to be had raiding the sea-lanes between South America and Spain. Spanish Galleons laden with gold were easy prey and this was work much more suited to Raleigh's character and he was determined to take his share of such rich pickings.
Like his contemporaries, Sir Francis Drake and Martin Frobisher by attacking Spanish galleons laden with treasure on the high seas he was committing piracy but it was a piracy that Queen Elizabeth was willing to turn a blind eye to as long as her coffers were regularly spilling over with gold and silver. Even if by doing so she ran the risk of provoking war with the powerful Spanish Empire.
Money had never been a problem for Raleigh and it had always been a means to an end and the end he had in mind was his desire to become an accepted member of the Royal Court. He loitered among its corridors, wrote poetry in the Queen's honour, begged for an audience with her and it was said that in 1581 he even lay his cloak down in her path so she did not have to step into a puddle. This incident was later to appear on his coat-of-arms. But even this act of deliberate and very public supplication failed to get him an audience. As a commoner it was almost impossible for him to do so. Something more would have to be done.
In 1584 along with some business associates he financed an expedition to North America to be led by himself. Once there he established the first European colony at Roanoke in an area he named Virginia in honour of the Virgin Queen. Upon his return to England he was lauded as a hero and at last received his much-cherished audience with the Queen. He then proceeded to charm her with tales of his adventures and never before seen items such as tobacco and the potato. 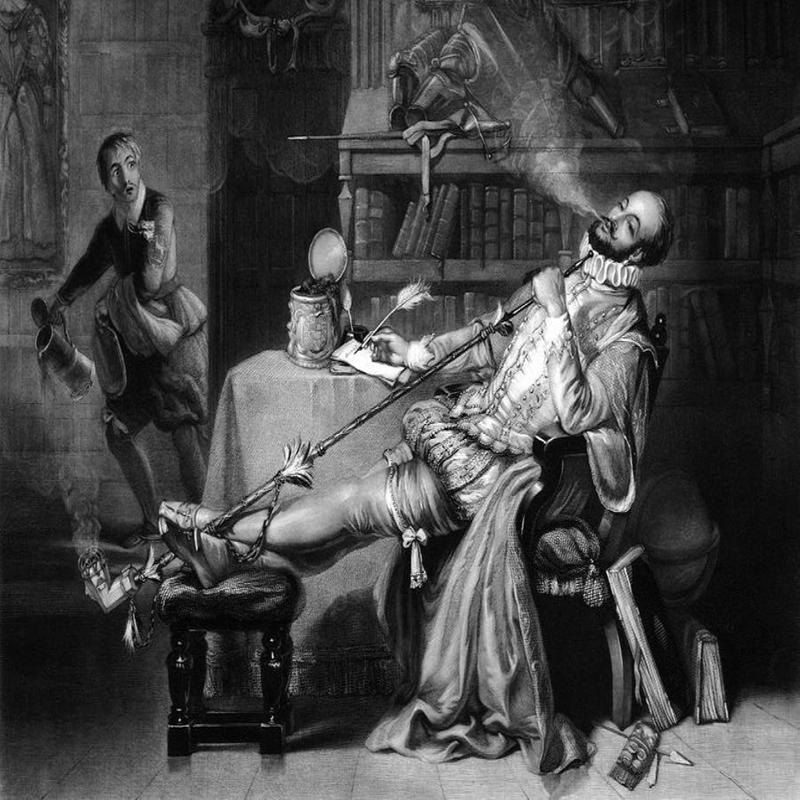 The expedition however had not yielded any treasure and there was nothing closer to the Queen's heart than money and jewels. Still she was flattered by his attention and his no doubt exaggerated tales of derring-do committed on her behalf - his reward was a knighthood.
Si Walter Raleigh now had what he had always desired, a place at Court and the confidence of the Queen. But he had not made himself popular in doing so.
At just over six feet tall he was strong athletic man and a fine swordsman with a fiery temper. He also behaved with a swagger that made him few friends. He also never lost the west-country brogue that singled him out at Court, was often outspoken and liked to have the last word in any argument. His brash self-confidence and willingness to physically intimidate those who disagreed with him alienated many and created an intense enmity that was not to diminish with time.
In 1587 a second expedition was dispatched to Roanoke led by Raleigh's business partner John White. The fleet carried supplies with the intention of establishing a more permanent settlement with White as Governor but their arrival at Roanoke was delayed by some weeks when they went in pursuit of Spanish treasure. The delay may have proved fatal for when they finally disembarked at Roanoke they found the colonists gone. They had previously been told that should they have to relocate at any time they should etch the name of the place they were going to in the bark of the trees. But the only clue to their whereabouts was the one word Croatan. No trace of the colonists was ever found.
Earlier in 1586 Raleigh commissioned the building of a ship in Deptford he named the Ark Raleigh. A year later he cashed in on it when with the country threatened by the Spanish Armada the Queen purchased it from him for the price of £5,000. She renamed it the Ark Royal which was to go on to become one of the most iconic names in the history of the Royal Navy.
As it transpired Raleigh did not play a significant role in the drama of the Armada. He had been given command for the defence of Devon and Cornwall and did not participate in any of the sea battles.
In 1591 he secretly married Elizabeth Throckmorton, one of the Queen's ladies-in-waiting. Elizabeth was always intensely jealous of her suitors and when she found out about the marriage she was furious. Bess Throckmorton was dismissed from her service and Raleigh briefly imprisoned in the Tower of London. Bess would get her job back a year later but Sir Walter would have to wait longer to again win the Queen's favour.
Despite uncertain beginnings Bess and Sir Walter were to remain devoted to one another for the rest of their lives and she was to run the family estates during his many and frequent absences.
Raleigh was elected to the House of Commons on a number of occasions but the business of politics bored him, he wanted adventure. In 1594 he came into possession of an account of a great Golden City that existed in what we know now as Venezuela. He set out to find it, he failed, but the stories of his adventures only enhanced his reputation further. In 1596 he ransacked the Spanish port of Cadiz and returned to London with his ships laden with treasure, a hero. His brashness and bravado had always made him a favourite of the crowd and he was now very much back in his Queen's favour. His star continued to rise and in 1600 he was appointed Governor of Jersey.
On 24 March 1603 Queen Elizabeth I died. Her death left Sir Walter Raleigh in a perilous position. He had never been popular at Court and his overbearing manner had made him a great many enemies. Elizabeth had always been his protector now she was gone his enemies began to circle.
On 19 July 1603 he was arrested and imprisoned in the Tower of London for his alleged involvement in a Catholic inspired plot to replace the recently crowned James I with his cousin, Lady Arbella Stuart. The allegations were based upon hearsay only and everyone knew that it was absurd to imagine that the rabidly anti-Catholic Raleigh would ever be involved in a plot to replace a Protestant King with a Catholic Queen. The trial went ahead regardless and despite defending himself well and even at times mocking the Court, he was found guilty of treason and sentenced to death. King James commuted this to a sentence of life imprisonment.
Raleigh was to remain in the Tower for the next thirteen years, but it was not imprisonment as we would understand it. He lived in great comfort spending his time composing verse, writing of his adventures, and rearranging the furniture. His wife was a frequent visitor and she would often stay overnight. Indeed, his son Carew was conceived while he was in prison.
In 1616 he was released on the promise that he could find El Dorado, the City of Gold. There was no City of Gold and the likelihood is that Raleigh knew this but there was the ever enticing prospect of stealing it from the Spanish and he was to attack and ransack a Spanish outpost on the Orinoco River, but the days when attacking Spanish possessions was lauded as patriotic act were over. It was now considered to be dangerous political adventurism.
Raleigh returned to London with little to show for his latest escapade and was confronted upon his return by the Spanish Ambassador who demanded that James re-impose the death penalty for his latest act of piracy. James, who was no friend of Raleigh's and remembered all too well his many and violent fulminations against his mother Mary Queen of Scots, was only too happy to oblige. 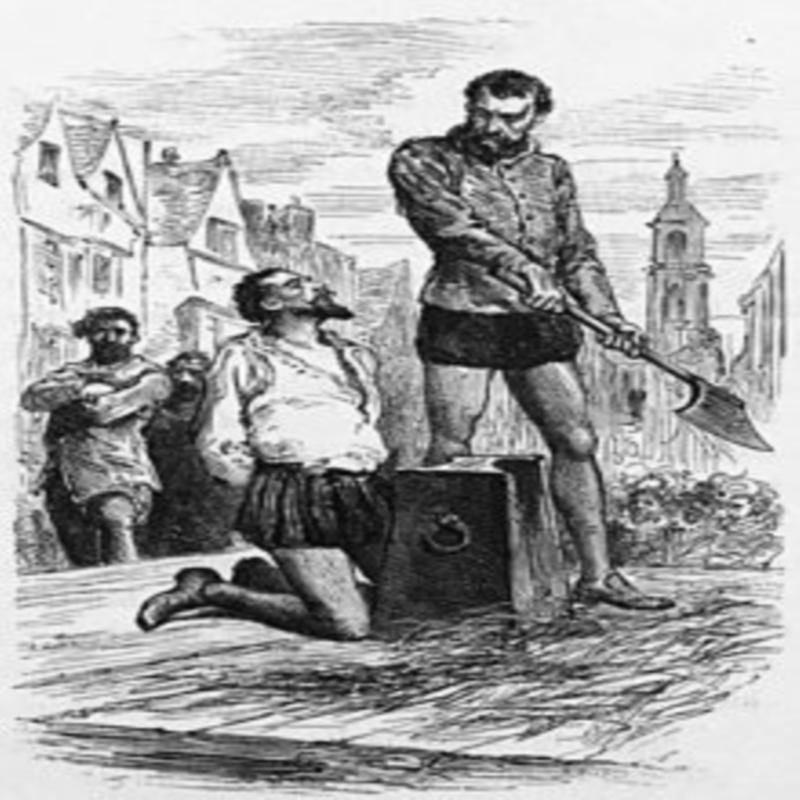 On 29 October 1618 Sir Walter Raleigh was taken to the Old Yard in the Palace of Westminster to await execution. He was eager to get it over with: "Let us dispatch Executioner; at this hour my ague comes upon me. I would not have my enemies think I quake from fear". Upon seeing the axe that was to be used to behead him he touched its blade and remarked, "This is sharp medicine, indeed". His last words as his head lay upon the block were, "Strike man, Strike!"
Though his popularity had decreased since the days of Elizabeth and he was very much yesterday's man he still remained a great English hero and the execution of this old man, he was 66 years of age, played badly with the public. It was seen by many as nothing less than an act of vindictiveness and also one of gross ingratitude for all the things he had done in the past. Indeed, a leading Judge at the time remarked:
"Never has English justice been so degraded and injured as in the condemnation of the Honourable Sir Walter Raleigh".
Tagged as: Tudor & Stuart
Share this post: