Posted on 24th February 2021
Spring-Heeled Jack was a phantom who terrorised Victorian Britain for more than sixty years. Indeed, so synonymous did the name Jack become with evil that it became the preferred prefix for all those things of dread, trepidation, horror, and surprise – Jack the Ripper, Jack Frost, Jack O’Lantern, Jack-in-the-Box.
He was described as being of diabolical and frightful appearance. He was said to be tall and thin and dressed in tight-fitting white oilskins and a long black cloak. He had claws for hands and red eyes that blazed like balls of fire. He spoke with a lisp something pertaining to English, breathed white and blue flames, was fleet of foot and could leap incredible heights and distances. And he terrified all those who met him. 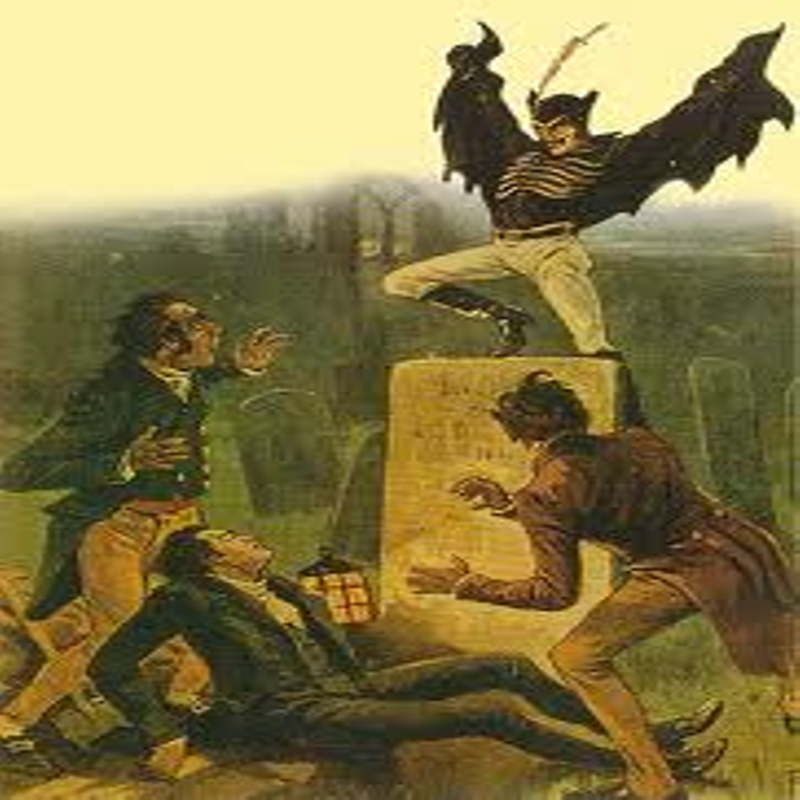 The first recorded sighting of Spring-Heeled Jack occurred late one night in early 1837. A man returning home from work reported to Police how a man had jumped over the railings of Barnes Cemetery in a single bound and confronted him in an aggressive fashion. No actual assault occurred and the man disappeared into the night without saying a word. Even so, he had been traumatised by his experience and would describe his assailant as a man of muscular appearance with a hooked nose and pointed ears. In fact he said he looked like the Devil himself.
Later that year in October, a young woman by the name of Mary Stevens was on her way to Lavender Hill from Battersea. It was a fresh night and the wind was kicking up and she was eager to get home. As she took a short-cut through Clapham Common a figure suddenly leapt out at her from the dark. She reported how the figure gripped her tightly by the arms and tried to kiss her. He tore at her clothes with what she said were claws which he ran up and down her flesh. She described him as being as cold and clammy as a corpse. Unable to struggle free she screamed and made such a noise that passers-by heard her terrified shrieks and came to her rescue, the culprit however made good his escape.
News of the devilish creature stalking the streets of London in the dead of night soon became the talk of the taverns, shops and streets alike and quickly became the subject of sensationalist stories in newspapers. The entire city appeared to be in thrall to the creature now known as Spring-Heeled Jack.
Such was the concern that on 9 January 1838, the Lord Mayor of London Sir John Cowan presided over a public meeting at the Mansion House to discuss this strange being who was terrorising their city. Though he was sceptical of some of the more exaggerated stories that were circulating the Mayor he was aware of the anxiety felt by many of those present so much so that he offered a substantial reward for the apprehension of the person, or persons, responsible for these attacks. 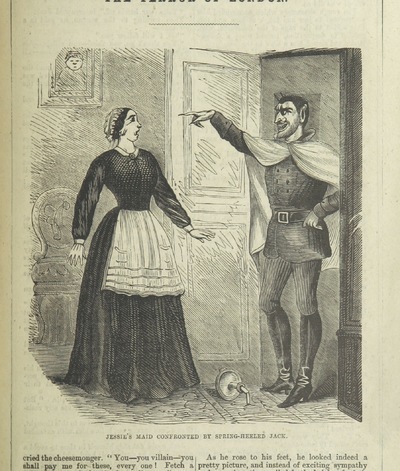 Just over a month later on 19 February, Jane Alsop answered the door of her father’s house. Standing before her in the gloom of a smog-bound London was a tall peculiar looking fellow who told her in a garbled accent that he was a Police Officer who had just caught Spring-Heeled Jack and could she please bring him a light. When she did so he attacked her ripping furiously at her clothes. She managed to struggle free but he soon caught up with her again slashing her neck and arms with his claws. Jane’s subsequent screams alerted her sister who hit the creature repeatedly with a poker before he fled and she managed to drag her sister away.
Eight days later on 28 February, an 18 year old girl, Lucy Scales and her sister were returning home to Limehouse after a day spent visiting friends. They were just passing Green Dragon Lane when a man who appeared to be wearing a long dark cloak emerged from the shadows. Lucy later described him as being tall and thin and carrying a small Bull’s Eye Lantern. As he approached her he spurted a blue flame into her face that temporarily blinded her. She was so frightened that she feinted and fell to the ground. Revived by her sister who led her home she was to continue to be seized by violent fits for hours to come. 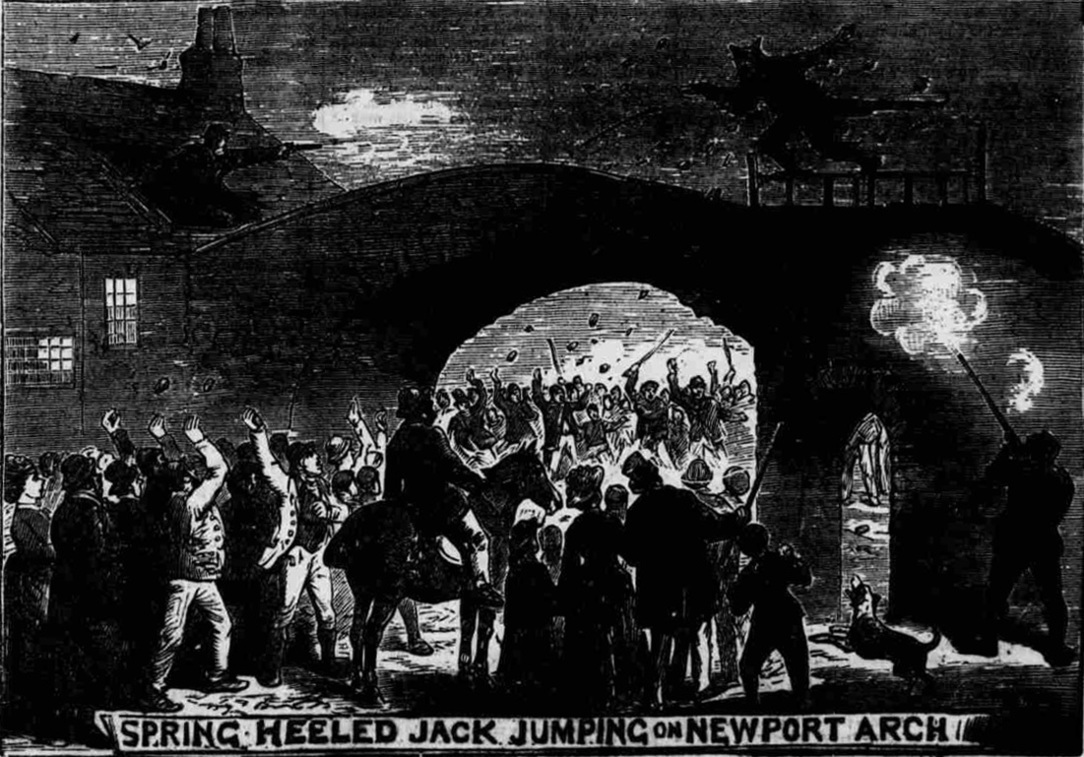 By now sightings of Spring-Heeled Jack were being reported the length and breadth of the country many of them stories made up by those seeking attention or the result of young scallywags having fun at everyone else’s expense, but they frightened people enough for Vigilante Committees to be set up and for armed men on horseback to patrol the streets and parks of many of England’s major cities.
So who or what was this spectral and macabre figure?
There were suspects, the most notable of whom was the Marquis of Waterford an unusual looking man with eccentric tastes and a well known dislike of women. It was said that he enjoyed frightening people but no evidence was ever produced against him. The most likely suspect of course was the devil himself.
As the initial panic over Spring-Heeled Jack subsided so did the reported sightings decrease but there were to be waves of Spring-Heeled Jack hysteria throughout the Victorian period. During the 1850’s he was said to be to blame for robbing a number of Mail Coaches in East Anglia, and he was also said to be responsible for the infamous Devil’s Footprints found in the snow in Devon in February 1855.
In August 1877, a sentry on duty at Aldershot Barracks reported that a strange looking and unusually aggressive man had approached him. When he issued a challenge and demanded that the man stop he continued to walk towards him and proceeded to slap him twice across the face. The shocked soldier lowered his rifle and fired at the man but the bullet appeared to go right through him. He then fled in great leaps displaying amazing energy and dexterity.
The soldier’s rifle was later examined and it had indeed been fired. Later that year a man suspected of being Spring-Heeled Jack was chased through the streets of Lincoln and barely escaped being lynched.
The last ever sighting of Spring-Heeled Jack was in Liverpool in late 1904. Cornered by a crowd he was said to have escaped by leaping from rooftop to rooftop before disappearing into the dark never to be seen again.
Was Spring-Heeled Jack the result of some strange hysteria that had gripped normally sober and straight-laced Victorian society? Was he the result of a practical joke that had gone too far and had subsequently been copied by others? Or was he, as at one time suspected, the Devil Incarnate sent to terrorise the good Christian people of England with his nocturnal visitations?
We can never know of course, unless he returns.
Tagged as: Victorian
Share this post: