The Battle of Agincourt

Posted on 4th January 2021
Our King went forth to Normandy
With grace and might of chivalry
There God for him wrought marvellously;
Wherefore England may call and cry
Thank the Lord! Thank the Lord!
Thank the Lord, England Give thanks to the Lord for Victory!
Few Monarchs have sealed a place for themselves in the national psyche quite like Henry V, a subject of popular culture in his own time, immortalised by the words of William Shakespeare, depicted on stage and screen for generations and known down the ages as England's Warrior King. It was not for him to be a footnote in history.
He was born in Monmouth Castle sometime in 1386 the exact date remains unknown, the son of Henry Bolingbroke of the House of Lancaster and his wife Mary de Bohun He was the grandson of John of Gaunt who had been Regent during King Richard II’s minority.
The young Henry was a serious and earnest child who rarely gave himself over to frivolity or the distraction of playing games. Instead he devoted himself to his studies and it was said even then it was as if he had been born to rule even though he was not in the direct line of succession and could have had no reasonable expectation at the time of ever doing so.
Yet his father as one of the wealthiest and most powerful magnates in England was always considered a threat and was often in dispute with King Richard who believed he harboured ambitions to seize the throne and it was as a result of one of these disputes that Bolingbroke found himself exiled abroad and his lands in England seized. 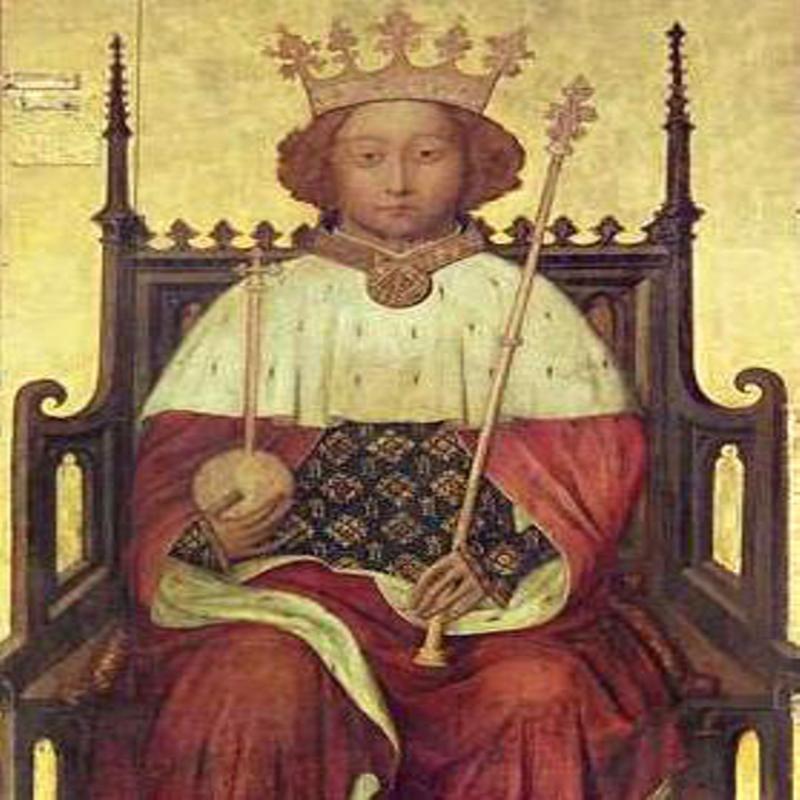 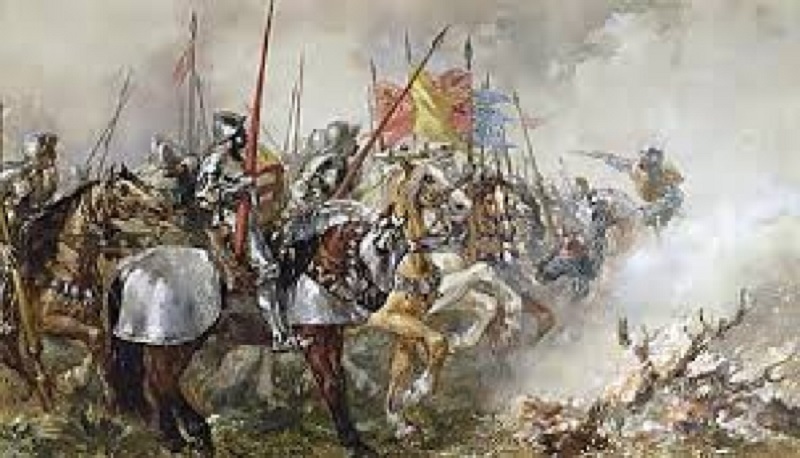 As the two armies eyed each other nervously the French sent emissaries to Henry with the aim of opening negotiations but he knew this was just a delaying tactic on their part as their army grew to such a size that any coming confrontation could only end badly for him. He would have to offer battle, something he had desperately wished to avoid given the poor state of his much depleted, half-starved, and exhausted army. But where could he fight that would give him at least a slim chance of victory?
The place Henry decided to make a stand was a small strip of land squeezed between two dense forests near the small village of Agincourt. Henry knew that taking up a defensive position here negated the prospect of being outflanked and he had also noticed that the land had recently been ploughed slowing down any French advance.
The French army by now around 30,000 strong had taken up a position at the northern end of the field thereby still blocking Henry's route to Calais. The French King, the feeble-minded and childlike Charles VI, who was at the time obsessed with the idea that he was made of glass and could shatter at any moment, did not travel with his army so his forces were commanded by Constable D'Albret, Marshal Boucicault, and the Duke of Orleans. They were all experienced soldiers, more than capable and were desperate to avenge previous indignities suffered at the hands of the English but the constant bickering between them only served to confuse their plan of action.
Henry had at his disposal 7,000 lightly armed bowmen and 1,500 men-at-arms. It was a force unlikely to produce anxiety amongst their opponents. 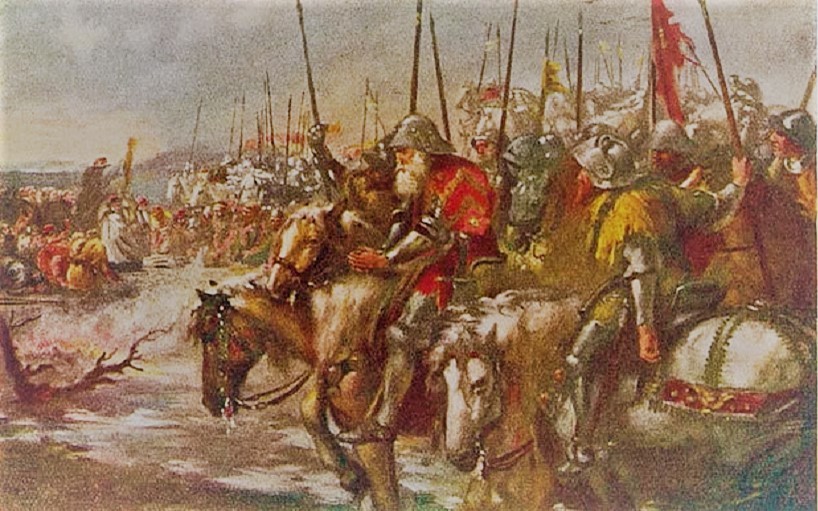 The night before the battle Henry addressed his troops telling those noblemen who accompanied him that if they were captured they were almost certain to be spared for ransom but then turning to the common soldiers he informed them that if defeated they would surely be killed so they had better fight for their lives and that night they prayed to God, were absolved of their sins, and slept in the open. They expected to die on the morrow and their spirits were hardly lifted by a heavy downpour of rain and a constant drizzle thereafter.
Their final night on earth it seemed had been made as miserable for them as possible. It was not a good omen and it did not appear that God was on their side but it was in truth a Godsend for the rain further churned up what was already soggy and muddied ground and it very quickly became a serious encumbrance to any attacking army.
The battle began on the morning of 25 October 1415, St Crispin’s Day, and the French were eager to begin the fight. 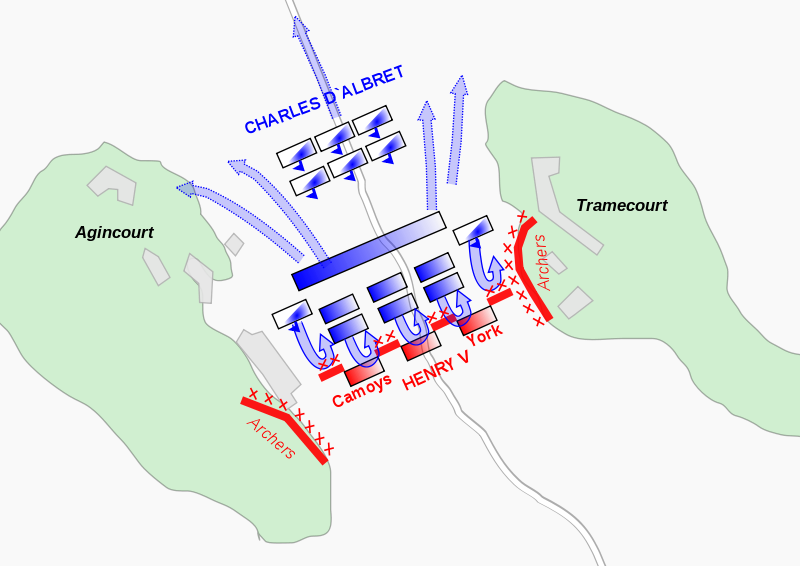 They possessed in their army a large number of mounted knights and outnumbered the English in men-at-arms by 5 to 1. They had not however learned the lessons of Crecy and Poitiers.
Henry placed his bowmen on either flank with his men-at-arms in the centre with himself in command. The bowmen drove pointed wooden stakes into the ground in advance of them to force any mounted cavalry to veer off and busied themselves in keeping their bows dry in the rain that continued to fall. Having prepared his men well he permitted prayers to be said and blessings to be made.
The French advanced around midday with 1,500 crossbowmen in the vanguard followed by 800 mounted knights and 8,000 men-at-arms. Behind them in a second line were a further 600 cavalry and 4,500 men-at-arms. Progress was slow and the crossbowmen who could only release their bolts at close range were holding up the advance. The mounted knights impatient to get to grips with the enemy rode forward of the crossbowmen trampling many of them underfoot as they did so and with the men-at-arms racing to keep up the entire advance began to descend into chaos.
After what seemed an eternity the French cavalry were at last able to extricate themselves from the mess and form a battle line, just moments later they were greeted by a hail of arrows.
The Welsh Longbow was the most lethal long range weapon of its day. As much as seven feet in length it had an effective range of up to 400 yards and a trained bowmen, could fire 15 arrows a minute. But it took immense strength to use it and was exhausting work. The preferred rate of fire was 6 arrows a minute but at Agincourt the rate of fire would have been high and it is possible that the French knights were met with as many as 70,000 arrows a minute, and the power of the longbow was immense. It was said that the arrow from a longbow could penetrate armour, slice through a man, and still kill the horse he was riding.
The advance of the French horsemen was hampered by the uneven ground and the mud slowed it even further and the longbow had lost none of its effectiveness. Hundreds of knights were killed long before they ever came close to the enemy and those knights who were unhorsed, weighed down by their armour and unable to move in the mud were slaughtered by the onrushing English men-at-arms.
The French infantry bogged down in mud that was in places knee deep were unable to come to the aid of their comrades in time. The entire advance had slowed to a snails pace and all the time the arrows continued to rain down. The French began to flee the field and as they did so they crashed into the advancing second line causing even further chaos and panic.
Henry seeing this now took the initiative and ordered his army to move forward. After a few hundred yards his bowmen again drove their stakes into the ground and began to fire their arrows into the retreating troops who could not escape the ceaseless rain of death. 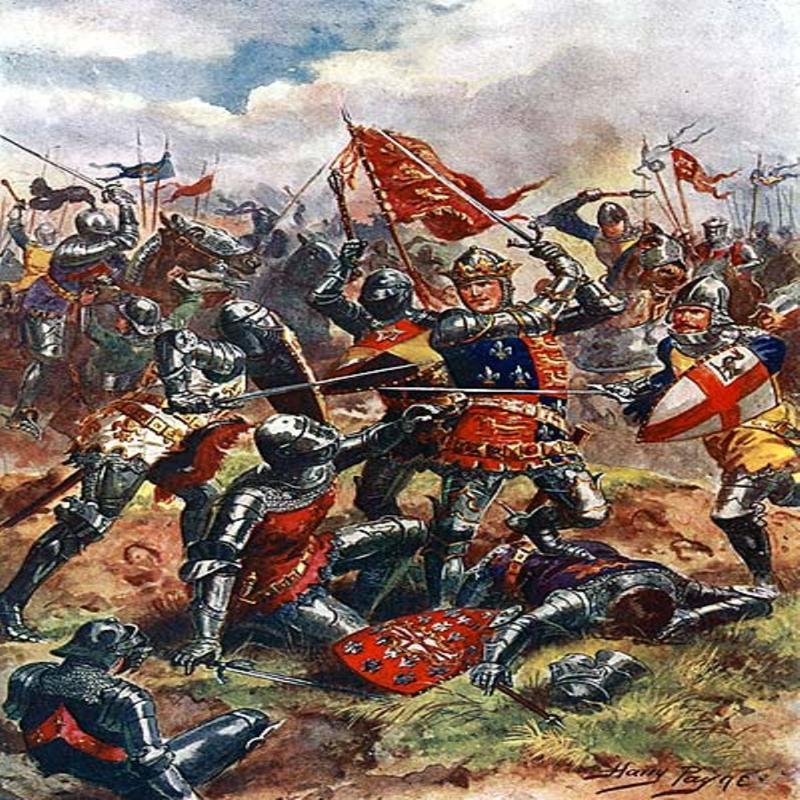 Initially surprised at this move the French soon rallied to launch yet another attack but the knights were again repelled and it was the men-at-arms with less distance to travel who now clashed with their English counterparts.
The fighting was ferocious but the English archers now abandoned their bows and armed with axes and knives joined in the fight, and in the thick of the action was Henry himself.
Upon learning that his younger brother Humphrey Duke of Gloucester, had been wounded he took his Household Guard and cutting a path through to where he was threatened with capture dragged him to safety.
As the battle wore on the French commitment to the fray began to waver but things were still far from over.
Late in the afternoon the English baggage train stationed to the rear of the army came under attack from troops and peasants sallying forth from a nearby castle and village. Fearing an attack in his rear and aware that the French had reserves greater in number than those troops already committed he ordered that all the prisoners taken be killed fearing that they might rearm themselves with those weapons discarded on the battlefield and rejoin the fight. Only the most noble were saved.
Witnessing the slaughter of the prisoners the French at last lost heart and began to abandon the battlefield.
Henry's victory was total. He had lost 450 men, the French more than 8,000 including the cream of their nobility with a further 1,000 taken for ransom.
The French never fully recovered from the disaster at Agincourt but even so it took a further five years of hard campaigning for Henry to achieve his aims but in 1420, after six months of torturous negotiations he was at last recognised as Regent of France and heir to the French Crown. The Treaty of Troyes stated that he would inherit the French Crown upon the death of Charles VI. As the French King was seventeen years his senior Henry had every prospect of fulfilling his dream and to seal the contract he married Charles's daughter Catherine of Valois on 2 June, 1420.
Surprisingly perhaps in a political marriage they were attracted to one another and it was said they were genuinely in love. Sadly for Henry he was to have little time with his new Queen, nor to enjoy his triumph. God who had granted him victory would not permit him to fulfil his destiny. He died suddenly on 31 August 1422 at Vincennes of dysentery, or the bloody flux as it was then known.
England's great Warrior King was dead at the age of just 35. Two months later Charles VI also died. Had Henry V lived just a few weeks longer then England and France would have been united as one nation and the children of Henry and Catherine, or their nearest relatives, would have been heirs to the French Crown.
In the coming decades everything the English had gained under Henry V would be lost and their claim to reign in France would lie in tatters.
***The Agincourt Carol, written shortly after the victory (Full Text can be found on our Fact File).
Tagged as: Ancient & Medieval
Share this post: