The Bombing of Dresden 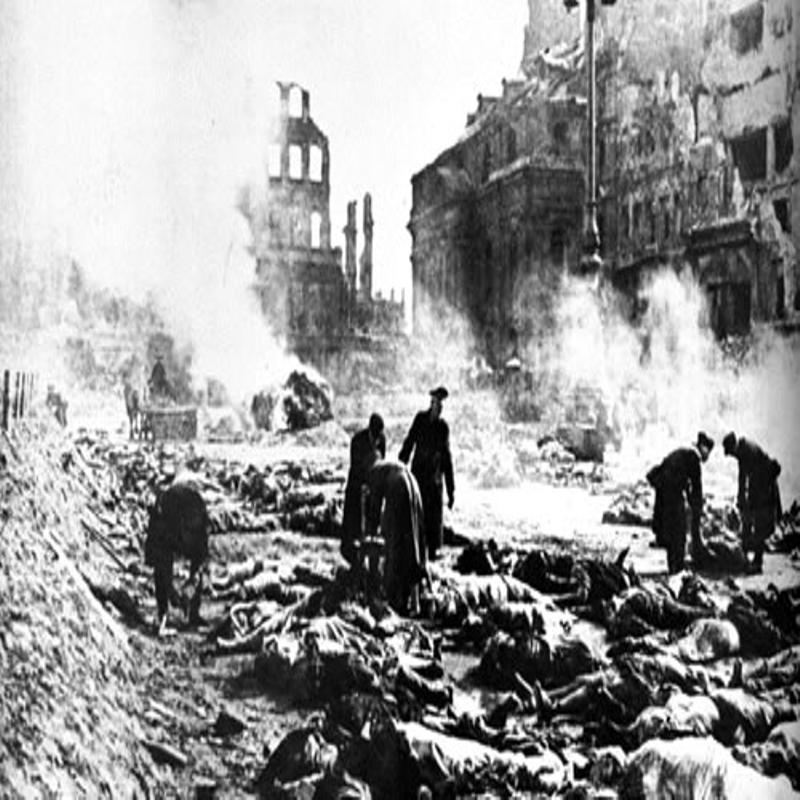 The Germans were as always thorough in their estimation of the damage: the old town centre of the Altkmark had been utterly destroyed and few people resident there had survived, 78,000 residential properties in the city as a whole had been destroyed, as also were 640 shops, 64 warehouses, 63 Administrative and Government Buildings, 39 schools, 31 Storage depots, 31 hotels, 24 banks, 19 hospitals, 17 churches, the Zoo, the waterworks, the railway, and 19 ships had been sunk on the River Elbe, and so on.
Prisoners of War held in camps nearby were brought into the city to clear up the mess and dispose of the bodies. Some were buried with due ceremony but in the worse affected areas the bodies were simply loaded onto carts and flame throwers used to set them alight before the remains were dumped into mass graves.
The Propaganda Minister Joseph Goebbels who did not shy away from the horror visited the city and met with survivors and those organising the clean-up operation. He knew that as in Britain during the Blitz such bombing raids only stiffened the German peoples will to resist. His presence showed they had not been abandoned and it was generally well received. 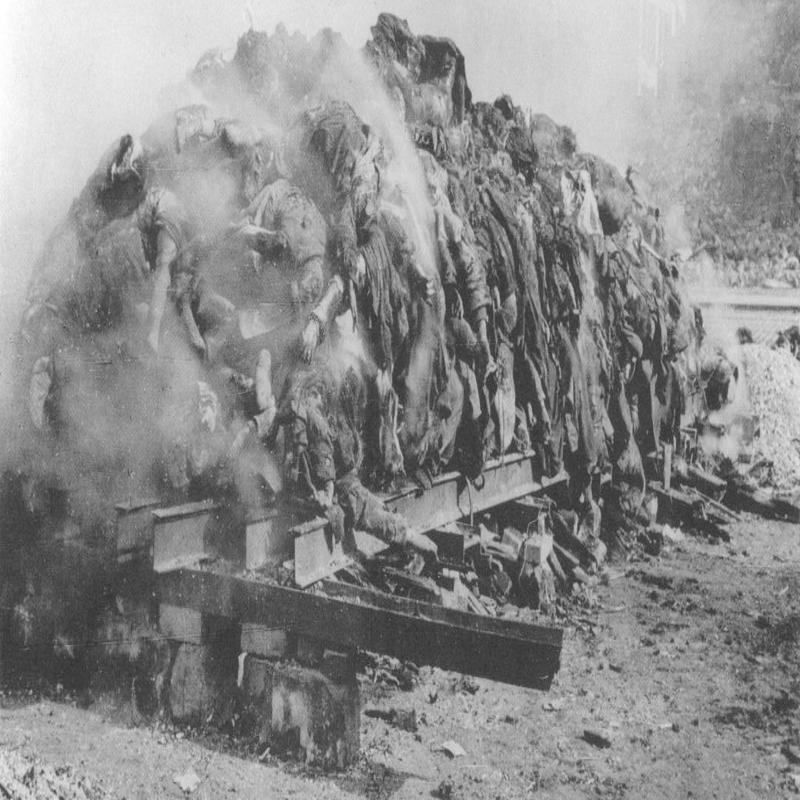 The some 200,000 refugees in the city at the time make any accurate assessment of casualties impossible. Also the remains of many of the dead had been reduced to little more than cinders while others who had come together for safety had been quite literally welded as one by the intense heat.
The death toll at the time was put at 22,000 with a further 35,000 reported missing, 25,000 of who would never be satisfactorily accounted for. Joseph Goebbels would exaggerate the figures for propaganda purposes to over 100,000 and for a long time this was widely believed.
More recent research suggests a death toll of around 22,000 with some 35,000 others badly burned and seriously injured.
It was however, the most deadly and destructive bombing raid of the war in the West though it pales a little when compared to the fire-bombing of Tokyo and the dropping of the Atomic Bomb on Hiroshima and Nagasaki.
The destruction of Dresden had also been achieved at little cost to the Allies just 6 British planes lost (3 by accident) and 1 American.
The raid on Dresden was the culmination of Air-Chief Marshal Arthur “Bomber” Harris’s strategy to destroy the German capacity to fight and the will of its people to continue the struggle through bombing alone. 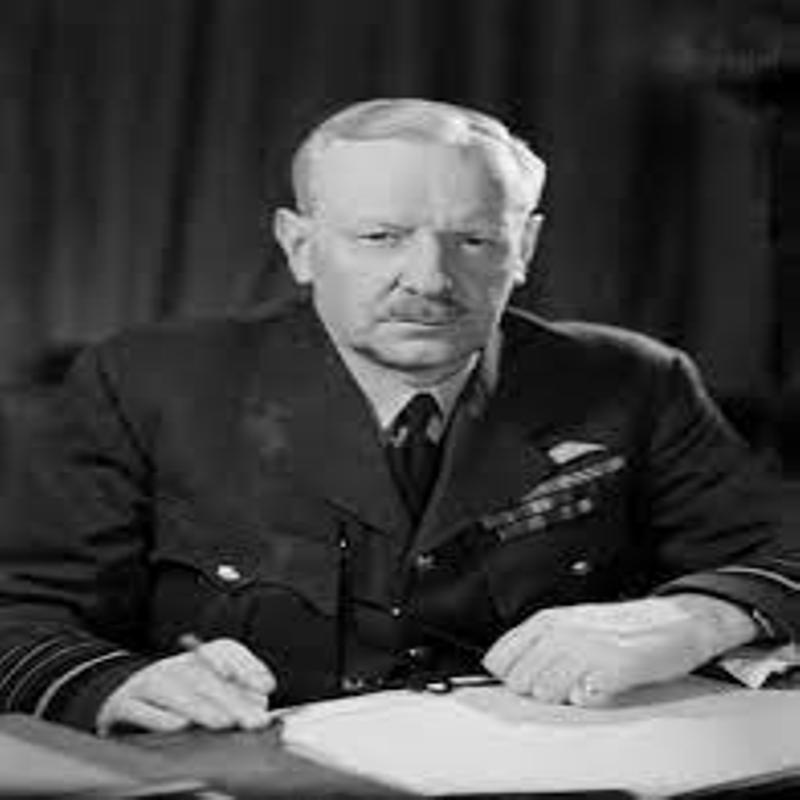 A grimly determined and humourless man Harris had been appointed Commander-in-Chief of Bomber Command in February 1942, a time when Britain had just come through the darkest period of the Blitz and appeared to have no effective means by which to hit back at Germany.
He had studied closely German tactics of aerial bombardment and believed that he could bring Germany to its knees through intensive and relentless bombing. He had announced in an early radio broadcast that Germany: “Had sowed the wind, and now they are going to reap the whirlwind.”
It was he who initiated the thousand Bomber Raids on Germany the first of which took place over Cologne on the night of 31 May 1942. It became known as Strategic Bombing, though Harris knew full well that only one-in-three bombs ever fell within five miles of its intended target. In truth he was an advocate of blanket bombing and was never shy in expressing its value as a terror tactic.
In the summer of 1942, Harris had been reinforced by the arrival of the U.S 8th Air Force which preferred the strategy of daylight precision bombing raids. It was now possible to bombard Germany day and night.
Whereas Allied propaganda was quick to declare the intention of the bombing raids was to destroy German munitions factories and disrupt production thereby curtailing its ability to sustain the war effort, Harris remained in no doubt as to its intention to spread terror and break the German will to fight: “The destruction of houses, public utilities, transport and lives, the creation of a refugee problem on an unprecedented scale, and the breakdown of morale on both the home and battle front, by fear of extensive and intensified bombing, is my policy.”
The British Prime Minister Winston Churchill frequently expressed moral scruples over the bombing campaign saying after the report of one such raid, “Are we beasts.” But Harris acted with the full endorsement of the Prime Minister and the war-time Coalition Government.
The bombing raids over Germany were to claim more than 600,000 civilian lives but the death toll among Allied air crews was also high. In one raid alone over Nuremburg on 30 March 1944, 94 bombers were shot down and 71 seriously damaged. In total 55,573 British and Commonwealth airmen were to die along with 26,000 Americans.
Even so, the controversy over Dresden was almost immediate with people in high places shaking their heads and wringing their hands while various inquiries were established to look into the facts. But despite the criticism that was building Arthur Harris refused to be cowed.
He told those willing to listen that Dresden was a centre of government, a hive of munitions factories and a major transport hub. That it wasn’t any longer was down to him.
The bombing of Dresden was justified he declared and the fact that Germany was already beaten did not make it less so:
“Attacks on cities like any other act of war are intolerable unless they are strategically justified. But they are justified in so far as they shorten the war and preserve the lives of Allied soldiers. I do not personally regard the whole of the remaining cities of Germany as worth the bones of one British Grenadier.”
At the end of the war Arthur Harris was the only senior British Military Commander not to receive a peerage, though this was later rectified in 1953.
It is unlikely that the bombing of Dresden and the firestorm that subsequently engulfed it altered the course of the war in any way at all. This must have been something that was apparent at the time, so whether or not it was a deliberate attempt to terrorise a current enemy and at the same time seek to intimidate a future one remains a matter of debate.
It is a subject that remains controversial to this day.
Tagged as: Modern, War
Share this post: