The Enigma of Kaspar Hauser

Posted on 23rd May 2021
On 26 May 1828, a forlorn looking boy disoriented, barely able to walk and evidently lost was discovered stumbling along the streets of Nuremburg. He was taken pity on by Georg Weickmann, a local cobbler who found on his person a letter addressed to a Captain von Wessenig of the Fourth Squadron of the Sixth Cavalry of Hussars. It read:
“This boy was given into my custody as an infant on 7 October, 1812. I have instructed him in reading, writing, and the Christian religion. But I have never allowed him to take a step outside the house. Now he would like to be a cavalryman, thus Captain, take him or hang him.” 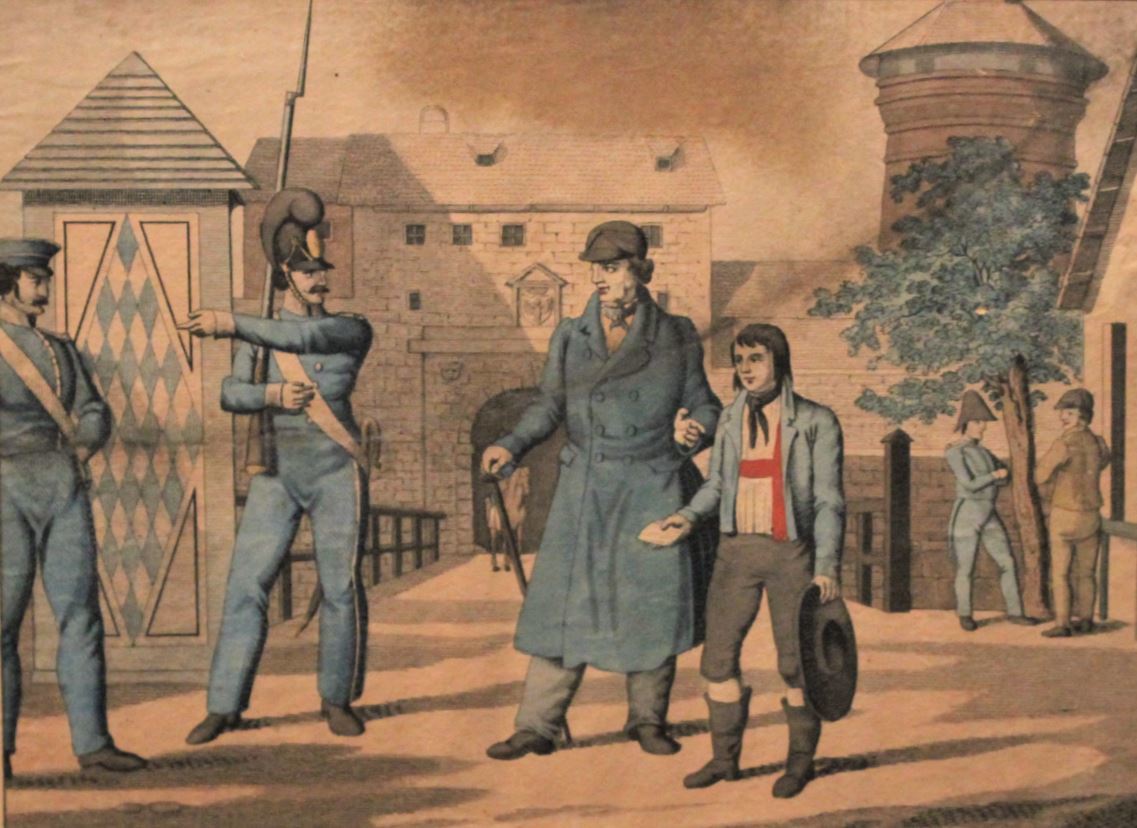 Weickmann took him to the house of the Captain in question but he was away. Not knowing where else to take him he decided to wait upon his return. In the meantime, his neighbours tried to feed the boy but he spat the food out as if disgusted by it.
When Captain Wessenig returned he was shown the letter and knowing nothing of it decided to question the boy. But he could elicit no other answer to his oft repeated questions other than – I don’t know. Frustrated, he took the boy to the local police station where still unable or refusing to answer any questions he was provided with a pen and paper and instructed to write his name. This he did with great self-assurance writing in big bold letters – Kaspar Hauser.
Kaspar, who stood at only 4’9″ inches and was estimated to be between 14 and 18 years old, was broad-shouldered and stocky with light-brown curly hair. His complexion was very fair as if he’d had little exposure to the sun. He had been found wearing a felt top hat, boots that were far too big for him, a grey cloth jacket, a linen shirt and trousers tied up with string. In his pockets were found a number of scrawled religious epigrams and some prayer beads. A further search of his clothing discovered more letters. One was seemingly from his mother. It explained that Kaspar was the son of a cavalryman who had been killed when he was still an infant and for reasons that were unexplained he had been given into the care of a poor labourer.
All of the letters ended with the same menacing demand to either take him or butcher him and appeared to have been written in the same hand.
His behaviour was also unusual: He was afraid of the light but fascinated by bright colours and he became obsessed with shiny objects; he didn’t understand the danger of fire and injured himself more than once; when he saw his own reflection in a mirror he would search for the person he thought must be hiding behind it. He would also eat only black bread and water and seemed happiest when he was left on his own in the dark. 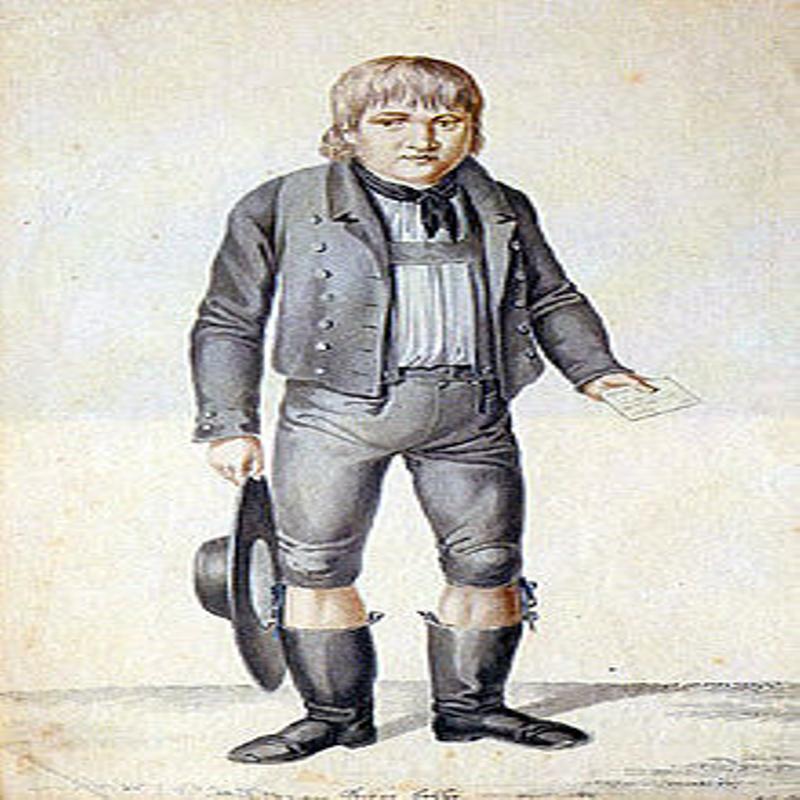 People soon became fascinated with this Kaspar Hauser – who was he? Where was he from? Could he be a feral child? His case soon came to the attention of the scientific community.
Kaspar spent the next two months of his life living in the local gate tower and it quickly became evident that first appearances had been deceptive for instead of being a sickly and crippled child he was in fact fit, healthy, strong, spry and had no difficulty in walking at all easily ascending the ninety steps to his room. But his behaviour remained unusual and he refused to change his diet of bread and water despite the many temptations on offer and would sit muttering to himself over and over again the same word – horse.
People would often visit just to gawp at him but he didn’t seem to mind. Indeed, he enjoyed all the attention. Eventually he was handed over into the care of Friedrich Daumer, a local schoolmaster whilst his case was investigated by Paul Ritter von Feuerbach, the noted jurist and President of the Court of Appeals. In the meantime, tests were carried out on Kaspar in an attempt to ascertain the veracity of his story.
So what was his story?
In his own account written just a year after he had first appeared, Kaspar explained that he had been raised in a cage seven feet long by five feet wide and only five feet high. The windows of the room he was kept in were boarded up and there was very little light. He was fed only black bread and water which he complained was often discoloured and bitter. He always slept deeply and sometimes when he awoke he would find that he had been washed, his clothes had been changed, and his hair cut. The person who did these things for him was a man, the same man who had brought him to Nuremburg.
When on 17 October 1829, Kaspar who had by this time learned to enjoy food which had become his greatest pleasure did not appear for his midday meal. His absence so surprised Friedrich Daumer that he sent his servants to look for him.
He was eventually found hiding in the cellar in a state of some confusion. He had a cut to his head and claimed that he had been attacked by a hooded man who had told him that he must die. Daumer and others were sceptical as to the truth and many believed that the wounds had been self-inflicted and that he was just seeking attention.
Even so, it was thought best he be removed to the safer environs of the home of Johann Biberbach, a municipal official. It was around this time that the rumour began to spread that Kaspar was the illegitimate child of the Royal House of Baden. A scar on his arm appeared to indicate that he had been inoculated which would only have happened had he been born into a privileged family.
People however were becoming heartily sick of Kaspar’s vanity and his constant lying and attention seeking and Johann Biberbach was among them, he couldn’t wait to be rid of him.
On 3 April 1830, Kaspar shot, himself there was a wound to the side of his head and a great deal of blood but this time there were no stories of hooded assailants. It had been an accident, he said. Whatever the truth of the matter it was the final straw, this boy who had been taken into the homes of others as an act of kindness seemed to be full of nothing but vanity, spite, and deceit.
An Englishman, Lord Stanhope now contacted Biberbach informing him that he had been taking an interest in Kaspar’s story and was willing to pay for his living expenses while he delved further into the case. He promised to return to England with Kaspar once he had uncovered the truth but was later to write a book saying how he had been thoroughly deceived instead.
In December 1831, Biberbach, with a sense of relief handed Kaspar over to Georg Meyer, a schoolmaster from Ansbach who took an immediate dislike to him but even so he found him a job as a copyist at a local law firm.
Kaspar stuck at his job but he was a poor worker who would often be found in a dream-like state staring aimlessly into space. All he could think and talk about was being taken to England by the mysterious Lord Stanhope.
In May 1833, Paul Ritter von Feuerbach died, he had been the only man who had remained steadfast in Kaspar’s defence protecting him against those who wished to force him from town and his death affected him greatly, though a letter was later found among Feuerbach’s papers that told another story: “Kaspar Hauser is a scheming rogue who should be killed.” 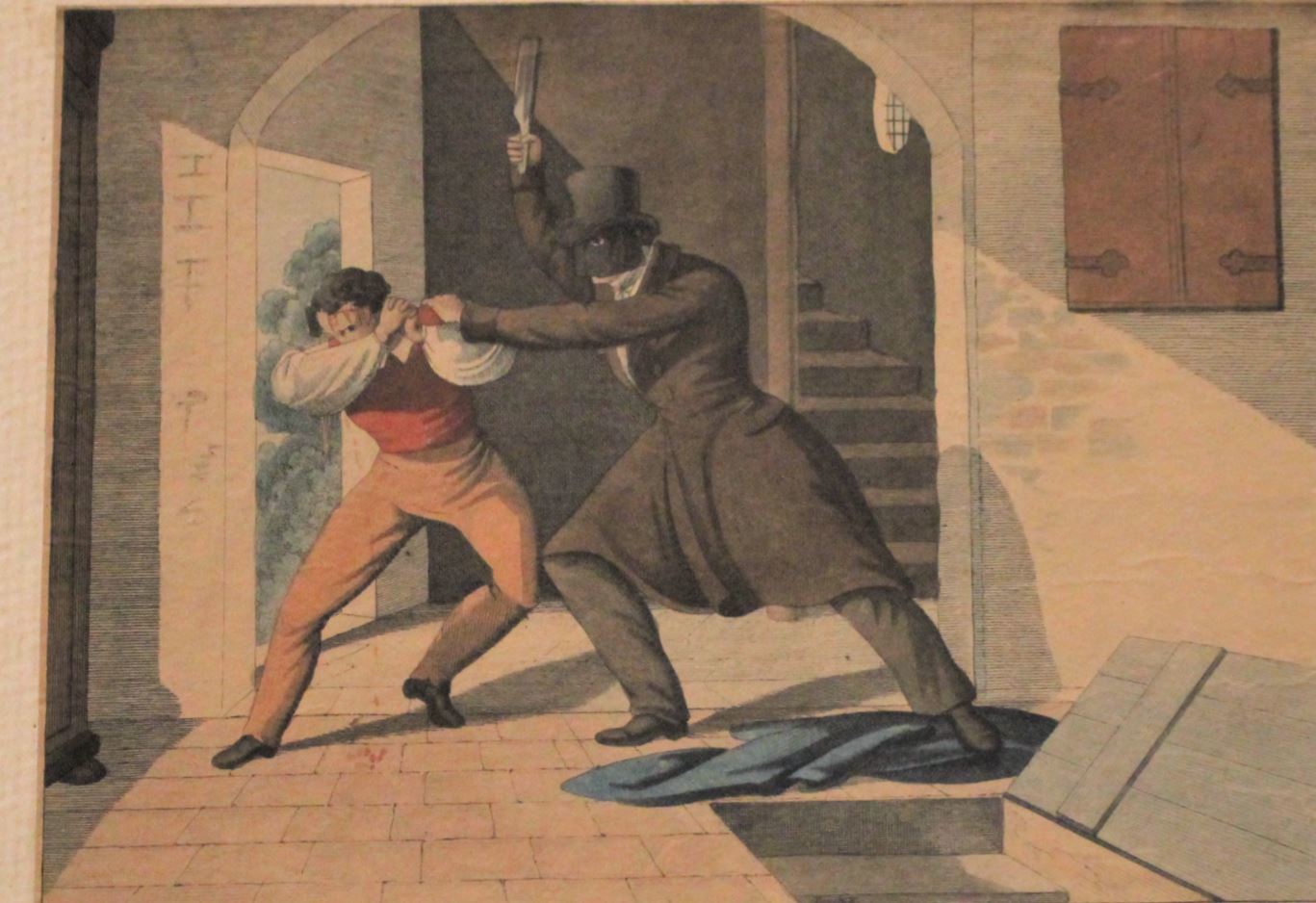 On 14 December 1833, Kaspar stumbled into the Meyer house blood gushing from a wound to his chest. He claimed that he had been stabbed by a stranger whilst walking in the Ansbach Court Gardens. A Police Officer named Herrlein searching for evidence found a small velvet purse. Inside it was a note that read: “Kaspar Hauser must die. He knows who I am. He knows where I am from.” Three days later Kaspar Hauser died of his wounds.
Rumours abounded at the time and for many years after his death that Kaspar Hauser had been the true heir to the throne of Baden, the child that had supposedly died in October 1812, just a month after its birth.
The child’s mother, the Grand Duchess Stephanie had been refused permission to see the body of her dead baby before its burial allowing the theory to be formed that the child’s aunt, the Countess of Hochberg, disguising herself as the ‘White Ghost,’ had kidnapped and imprisoned it to ensure that her own sons inherited the throne, and that when it appeared that the truth might be revealed they had Kaspar killed.
Such a theory may appear absurd now but it was widely believed at the time.
But many others expressed doubts considering Kaspar Hauser a paranoid fantasist and a fraud He may never have claimed to be of royal blood but that was neither here nor there. .
So was he an unscrupulous attention seeker or the unfortunate victim of a conspiracy? Did he die as the result of a self-inflicted wound or was he murdered? We do not now – the life of Kaspar Hauser remains an enigma.
His tombstone reads:
“Here lies Kaspar Hauser – his birth unknown – his death a mystery
Tagged as: Miscellaneous
Share this post: