The Mistresses of Charles II

Posted on 25th June 2021
King Charles II, was known as the Merry Monarch not merely for his pleasant demeanour, laid back manner, extravagant wigs, stylish dress, love of spaniels and the restoration of Christmas but also for his many mistresses. He was to sire at least 8 children all needless to say out of wedlock.
His Portuguese wife of 23 years Catherine de Braganza having been raised in a Convent and secluded from the outside world had acquired few of the social skills that might have distracted the fun-loving King’s roving eye. She was also barren and so with the call of duty removed his amorous intentions were directed elsewhere.
Sidelined not just in the King’s affections but also at the Royal Court she rarely complained and endured all with a forbearance which was either to be admired or not either way the King’s brazen behaviour towards other women ensured her humiliation was constant. 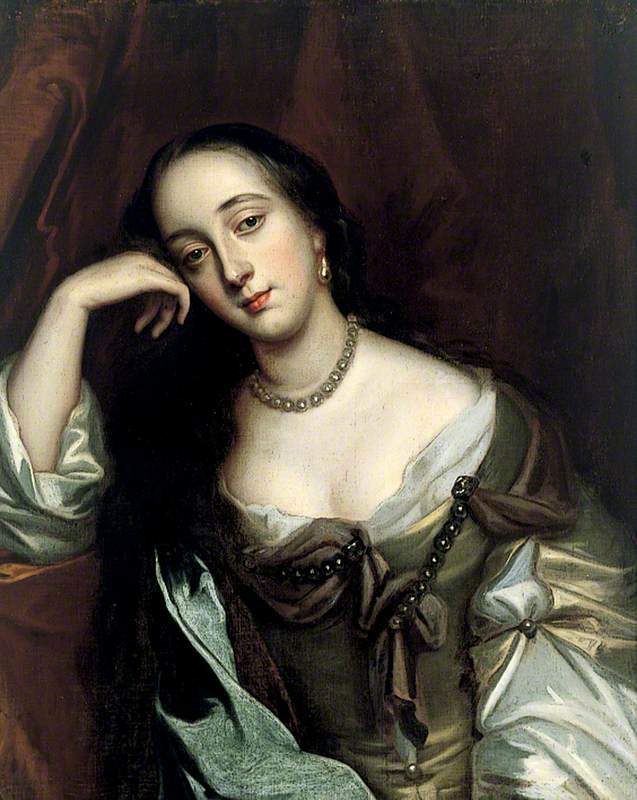 Barbara Villiers – described as a tall, dark, alluring beauty with hair that cascaded over her shoulders and whose eyes could pierce the soul and melt the heart of any man was Charles II’s long-time mistress frequently at his side and even more so in his bed.
In 1659, she married Roger Palmer the future Earl Castlemaine but within a year had abandoned him in favour of the King but she was never an easy woman refusing either to be silent or a mere receptacle for his passion. She was renowned for her quick temper, her unwillingness to keep her own counsel and for meddling in State Affairs. She was never someone simply willing to stroke the King’s ego or anything else for that matter and despite being known for acts of great of kindness it ensured she was loved and loathed in equal measure.
The diarist Samuel Pepys was an admirer his eye for the ladies drawn to her voluptuous figure but that other great chronicler of the age, John Evelyn, thought her the ‘Curse of the Nation.’
Throughout their affair Barbara, perhaps taking the King’s lead, had many lovers of her own among them actors, acrobats and even her own cousin, John Churchill.
Her relationship with the King was always a tempestuous one, at least on her part, but their mutual affection was genuine enough at least until her beauty began to fade. In 1673, aged 33 and after a passionate 13 year affair during which she bore him 5 children he cast her aside telling her to “go away, live quietly, and cause no scandal.” She did as she was told. 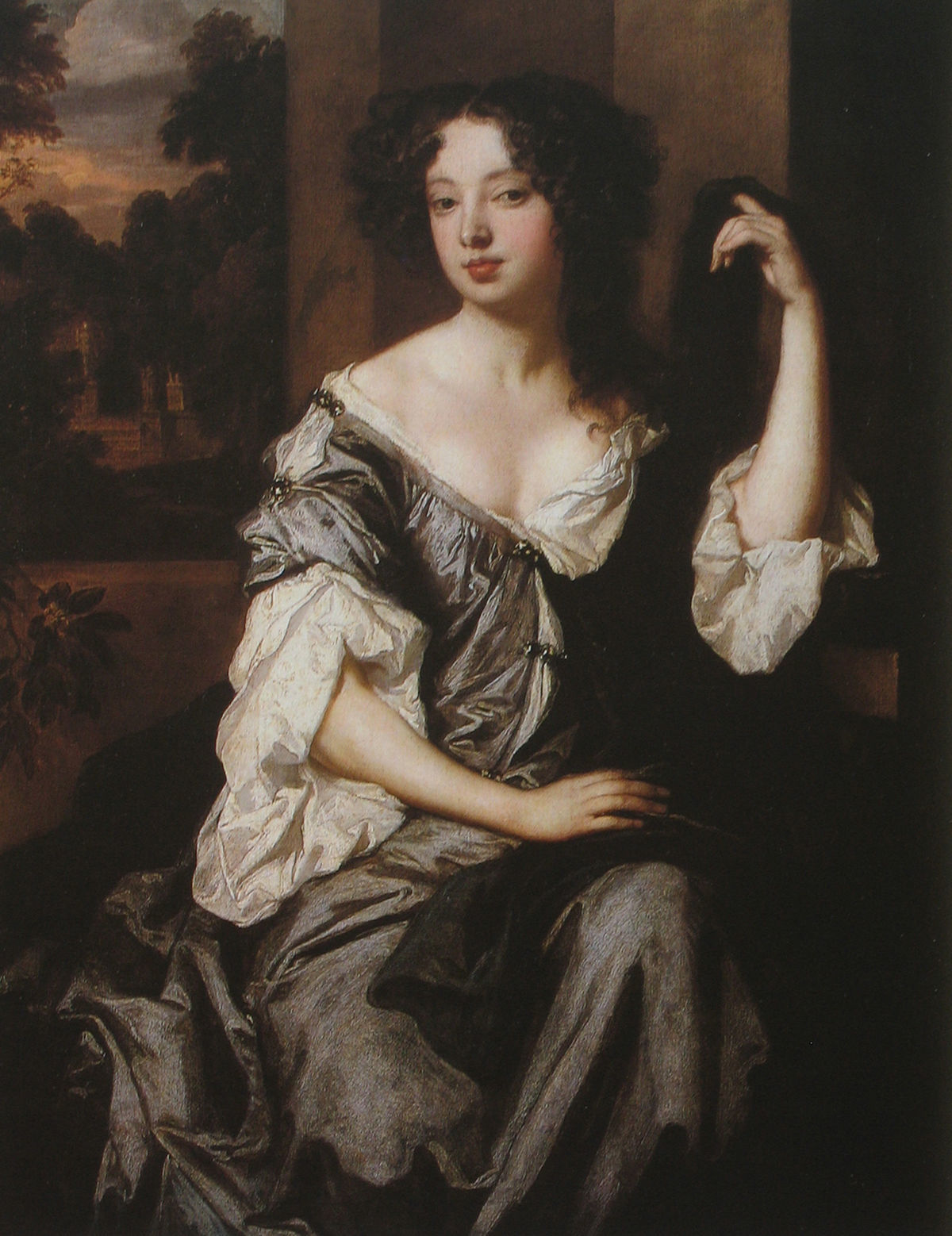 Louise de Keroualle was the French spy in the English King’s bed having seduced Charles at the behest of Louis XIV with her love-making then a patriotic act to some, a treasonable offence to others.
Her ‘Baby Face’, soporific eyes, overly feminine manner and silly girlish charm which so captivated the King in fact disguised an acute intelligence and no little cunning. Others were not so easily fooled however, and she was hated by many at the Royal Court who she would tease by flaunting her Catholicism and the wealth she had accrued from the Royal Purse.
But she also had a vice, an addiction to gambling, and time-and-again Charles, much to his frustration, had to pay her debts. Still he adored her and was willing to endure criticism to make her Duchess of Portsmouth. When he died however, considered an affront to the nation, Louise was forced to flee leaving her wealth and estates behind. She had borne him no children. 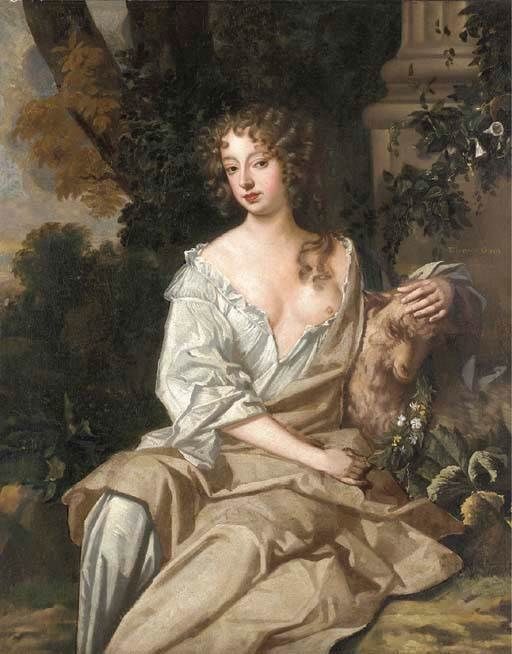 Nell Gwynne, the street-hawker turned actress born to poverty in Coal Yard Alley, Covent Garden is perhaps the most famous of the King’s mistresses. High-spirited, fun loving, well-endowed and as common-as-muck she was so unlike the polished ladies of the Royal Court that she was nothing short of a sensation, and the King loved her for it.
Once when heckled by a crowd of onlookers who mistook her for Louise de Keroualle, who she liked to refer to as ‘Squintabella’ she stood upon a carriage and shouted: “Pray good people, be civil. I am the Protestant whore!”
First, last, and always a mistress Nell had no ambitions beyond pleasing her man wanting neither money nor titles. She was fun to be around and the King always appreciated her honesty, a rare commodity at the Royal Court. Indeed, Charles never tired of Nell even upon his deathbed pleading – do not let my Nelly starve. But she was to die just two years later, aged 37. She bore him 2 children. 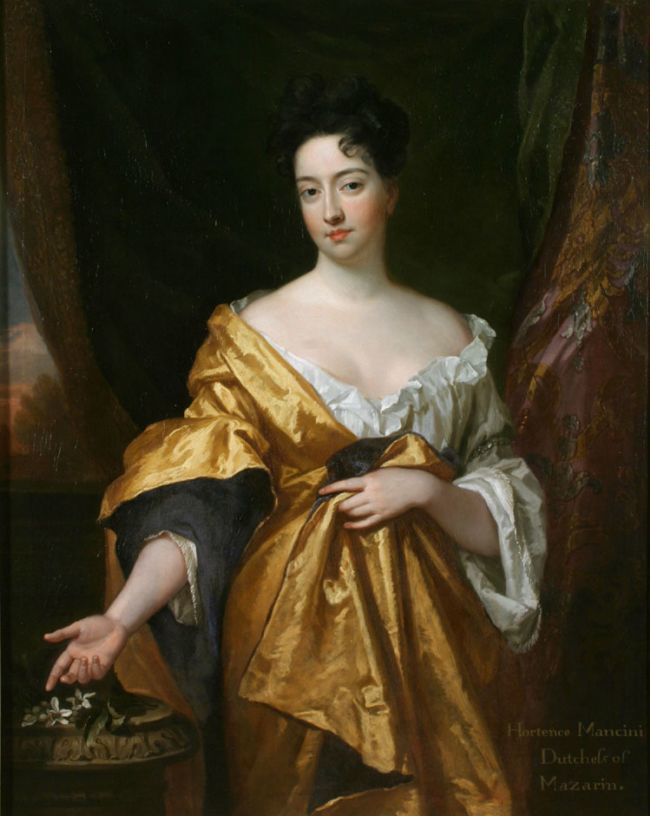 Hortense Mancini was a familiar figure at the Court of Louis XIV in Versailles until abandoned by her husband she fell on hard times. In a state of some distress but still a beautiful woman it was suggested she leave Versailles and the Court gossips and seduce instead the English King – an experienced courtesan well-versed in the affectations required to tickle a man’s fancy she did so with aplomb and for time replaced all others in the King’s affections.
The relationship ended however when she was caught in bed with the King’s daughter.
Despite this revelation of her true sexuality and her seduction of a Royal Princess they remained friends. She bore him no children. 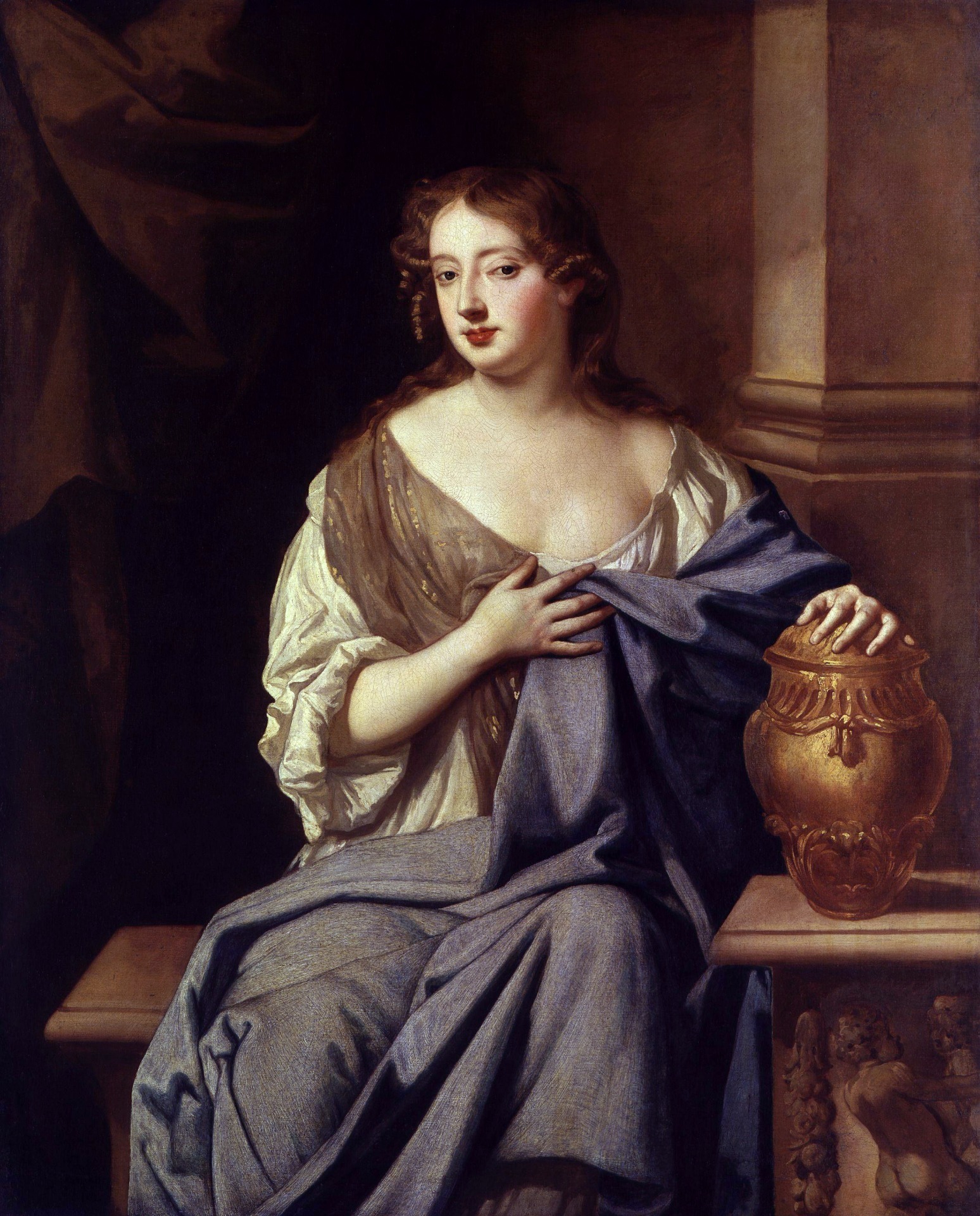 Moll Davis was an actress and dancer who was loud, boisterous, and considered vulgar in almost every way, in her speech, her manners and her dress but the King enjoyed both her company and the fact that her presence so irked others.
Even though the relationship did not last long and she bore him no children she was well-rewarded for her time. 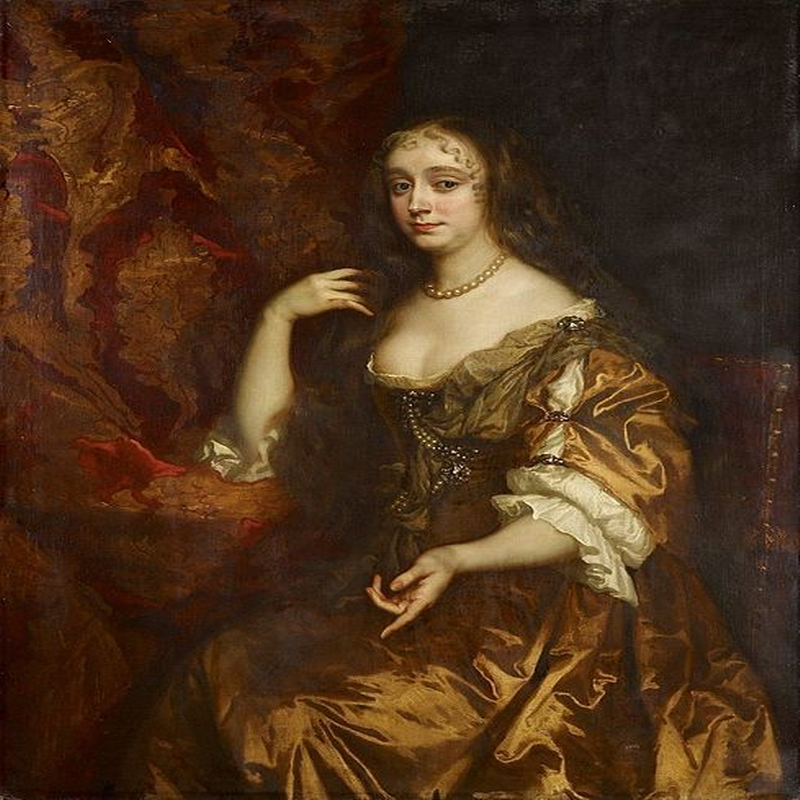 Lucy Walter was the young Prince Charles first great love and bore him a son, the future Duke of Monmouth who believing his parents had secretly married thought himself his father’s legitimate heir. Charles would deny this many times over and try to shield his favourite child from the consequences of his own ambition. In this he failed and Monmouth would later be executed by his uncles James II, for trying to usurp the throne.
Lucy died aged just 27 when it was said she and Charles were still very much in love and it seems possible that this hurt him so deeply that he was never willing to commit himself entirely to any one woman thereafter.
Winifred Wells was a Maid of Honour to the Royal Court and described as having “the carriage of a Goddess and the physiognomy of dreams.” It had not gone unnoticed, even if Barbara Villiers referred to her as the Goose.
It was rumoured that Winifred bore the King a son and though it was never substantiated he did pay her £2,150 merely to go away.
Catherine Pegge: the daughter of a baronet she was the lover of Charles before he became King and continued to be so on-and-off thereafter.
It was rumoured that she too bore him children, perhaps as many as three.
Elizabeth Killigrew, Viscountess Shannon: enjoyed a short-term liaison with Charles just prior to his becoming King in 1660. It was said she bore him a daughter.
There were many other lovers besides those mentioned and such was King Charles reputation that it seemed he need only set eyes upon a woman for her to be in imminent danger of giving birth; but in truth if he believed himself to be the father of any offspring he was never shy of admitting such and though he may have taken and discarded lovers with impunity those children he acknowledged as his were provided with titles, houses, a pension and were never unwelcome in his presence.
He is known to have fathered 8 illegitimate children but as this article shows it may have been many more; but it seems unlikely given his character for he may have abandoned his women but not it seems his responsibility.
Tagged as: Monarchy, Tudor & Stuart, Women
Share this post: