Posted on 14th October 2021
Theodore Roosevelt was nothing if not bold, he was bold in speech and in-deed but then he had made himself so; sickly as a child, short sighted and frail he was determined not be such as a man and had since been a ranch hand, a big game hunter and a tough, uncompromising politician now he would also be a soldier.
The United States had declared war on Spain on 21 April 1895, a little over a month after the cruiser U.S.S Maine had blown up in Havana Harbour killing 266 sailors. The official investigation into the Maine’s destruction concluded it had been caused by sabotage. Despite its denials to the contrary the obvious culprit was Spain whose colonial interests clashed with those of the United States. Even so, President McKinley had hesitated to act but a jingoistic press would not let the matter lie. 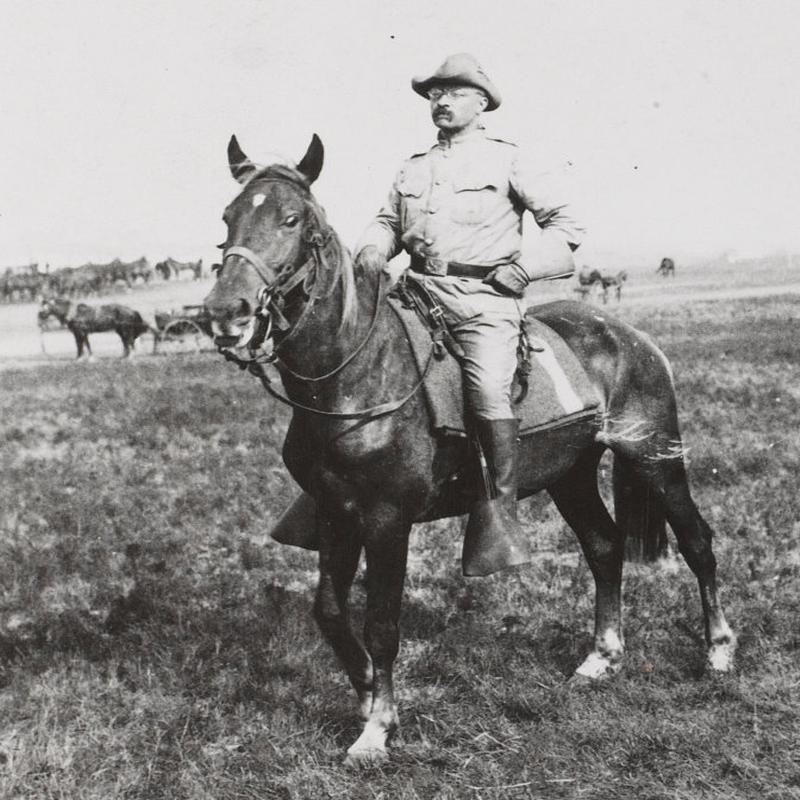 Roosevelt who was excited by the prospect of war resigned his post as Under Secretary of the Navy in the McKinley Administration to form in partnership with Colonel Leonard Wood the First United States Voluntary Cavalry Regiment soon to become known as the Rough Riders.
Sent to fight in Spanish occupied Cuba on 1 July he led his men in a frontal assault on the Spanish positions atop San Juan Hill. His intervention was pivotal in forcing the Spanish to withdraw but the hill had been taken at a heavy cost of 1,200 casualties.
For his leadership, daring and courage Theodore Roosevelt was nominated for the Medal of Honor but the award was declined. It was a decision that was later reversed with the medal awarded posthumously in 2001.
Earlier the battle the American advance had stalled. This is the account of the journalist Richard Harding Davis who was present at the scene: 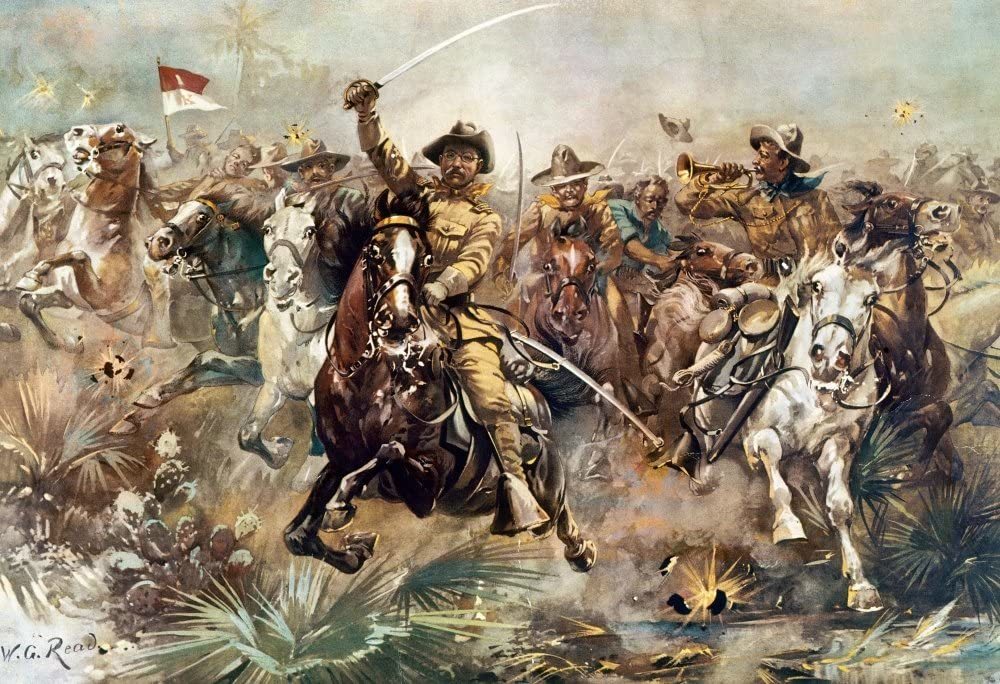 "Colonel Roosevelt, on horseback, broke from the woods behind the line of the Ninth, and finding its men lying in his way, shouted: 'If you don't wish to go forward, let my men pass, please.' The junior officers of the Ninth, with their Negroes, instantly sprang into line with the Rough Riders, and charged at the blue block-house on the right.
I speak of Roosevelt first because, with General Hawkins, who led Kent's division, notably the Sixth and Sixteenth Regulars, he was, without doubt, the most conspicuous figure in the charge. General Hawkins, with hair as white as snow, and yet far in advance of men thirty years his junior, was so noble a sight that you felt inclined to pray for his safety; on the other hand, Roosevelt, mounted high on horseback, and charging the rifle-pits at a gallop and quite alone, made you feel that you would like to cheer. He wore on his sombrero a blue polka-dot handkerchief, a la Havelock, which, as he advanced, floated out straight behind his head, like a guidon. Afterward, the men of his regiment who followed this flag, adopted a polka-dot handkerchief as the badge of the Rough Riders. These two officers were notably conspicuous in the charge, but no one can claim that any two men, or anyone man, was more brave or more daring, or showed greater courage in that slow, stubborn advance than did any of the others. . . .
I think the thing which impressed one the most, when our men started from cover, was that they were so few. It seemed as if someone had made an awful and terrible mistake. One's instinct was to call them to come back. You felt that someone had blundered and that these few men were blindly following out some madman's mad order. It was not heroic then, it seemed merely terribly pathetic. The pity of it, the folly of such a sacrifice was what held you.
They had no glittering bayonets, they were not massed in regular array. There were a few men in advance, bunched together, and creeping up a steep, sunny hill, the top of which roared and flashed with flame. The men held their guns pressed across their breasts and stepped heavily as they climbed. Behind these first few, spreading out like a fan, were single lines of men, slipping and scrambling in the smooth grass, moving forward with difficulty, as though they were wading waist high through water, moving slowly, carefully, with strenuous effort. It was much more wonderful than any swinging charge could have been. They walked to greet death at every step, many of them, as they advanced, sinking suddenly or pitching forward and disappearing in the high grass, but the others' waded on, stubbornly, forming a thin blue line that kept creeping higher and higher up the hill. It was as inevitable as the rising tide. It was a miracle of self-sacrifice, a triumph of bulldog courage, which one watched breathless with wonder. The fire of the Spanish riflemen, who still stuck bravely to their posts, doubled and trebled in fierceness, the crests of the hills crackled and burst in amazed roars, and rippled with waves of tiny flames. But the blue line crept steadily up and on, and then, near the top, the broken fragments gathered together with a sudden burst of speed, the Spaniards appeared for a moment outlined against the sky and poised for instant flight, fired a last volley and fled before the swift-moving wave that leaped and sprang after them.
The men of the Ninth and the Rough Riders rushed to the blockhouse together, the men of the Sixth, of the Third, of the Tenth Cavalry, of the Sixth and Sixteenth Infantry, fell on their faces along the crest of the hills beyond, and opened upon the vanishing enemy. They drove the yellow silk flags of the cavalry and the Stars and Stripes of their country into the soft earth of the trenches, and then sank down and looked back at the road they had climbed and swung their hats in the air. And from far overhead, from these few figures perched on the Spanish rifle-pits, with their flags planted among the empty cartridges of the enemy, and overlooking the walls of Santiago, came, faintly, the sound of a tired, broken cheer."
Tagged as: Fact File, War
Share this post: