Posted on 22nd October 2021
To be homosexual in 1960’s America meant for most people a double-life. Those who refused to curtail their sexual activities or live covertly were subject to intimidation, police harassment, and possible arrest. Those who were revealed to be homosexual in the workplace were likely to lose their jobs, and for those in high-profile professions they were liable to public humiliation.
Even as late as 1975, homosexuality was considered by Government Agencies and the Medical Profession to be a personality disorder and a treatable illness. It was also considered by all of the mainstream Churches to be a sin, not just against nature, but against God.
The 1960’s however were a period of immense social upheaval in the United States as elsewhere. The consumer led boom and well-ordered complacency of the previous decade had been replaced by uncertainty and the breakdown of deference. The Black Civil Rights Movement was on the march, anti-Vietnam War demonstrations were on the increase, there was violence on College Campuses and change dominated the political agenda.
Despite all this the United States remained a deeply conservative country and the collective memory of America in the 1960’s we have today of a long-haired, carefree, experimental youth dedicated to the pursuit of peace and love in a harmonious world fuelled by the easy availability of drugs, is misleading. These people were vocal and demonstrative but they were only ever a small minority and certainly did not reflect the views or lives of the majority of Americans. The path to liberalisation was to be a slow and painful one.
Deep seated social attitudes can never be changed as easily as the law but small steps make for big strides. One such small step that was to lead to previously unimagined change took place in the early hours of the morning of 28 June 1969, in New York City. 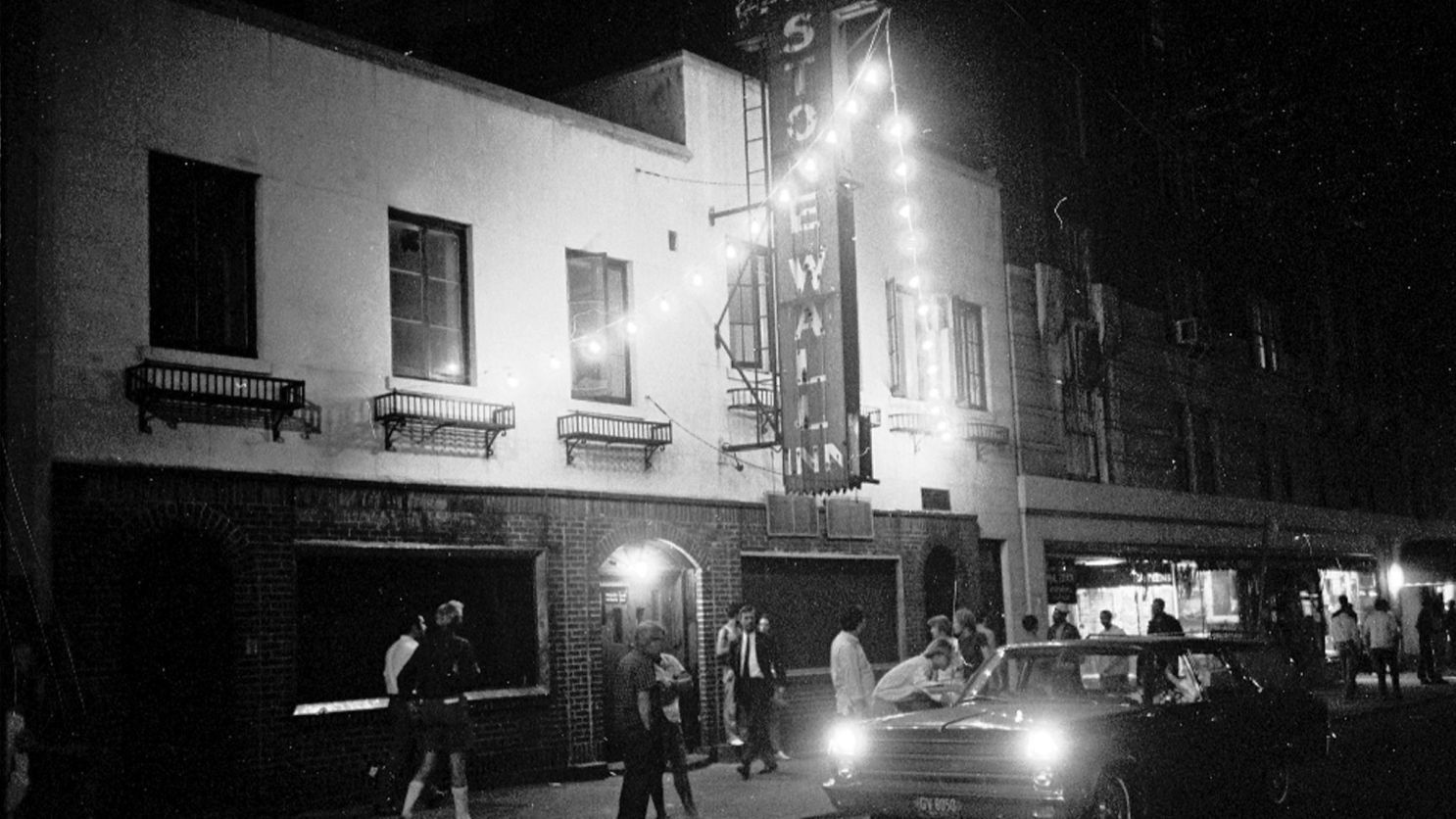 The Stonewall Inn was a Gay Bar situated on Christopher Street in Greenwich Village. It was Mafia owned and part of the Genovese Family Criminal Empire, and though they were no friends of the homosexual community they put their personal prejudices aside when it came to making money from the large number of homosexuals who resided in the Village.
The Bar itself was grubby with no fire exits and no licence to sell alcohol though alcohol could always be found on the premises. The Stonewall Inn was in fact a dive, but it was a Gay dive. It was also the only one in the city that permitted dancing.
Access to it was tightly controlled in an attempt to keep out undercover police officers known with little affection as Lily Law and Betty Badge. Despite this and in common with most of New York’s other Gay Bars it was subject to regular police raids. These could often be avoided through kick-backs and pay-offs, but this was not to be the case on this particular night.
A police raid was a frightening and humiliating experience. All of the lights would be switched on and everyone ordered to remain where they were. Then in the full-glare of illumination they would be forced to line up.
It was illegal at the time to wear the clothing of the opposite sex so those transvestites and drag queens present would be liable to immediate arrest. As also were lesbians who were not wearing at least the three items of female attire that were required to by law. Everyone would then be made to provide identification and details of their home address with the likelihood that their parents would be informed. If their presence in the bar was passed on to their employer then there was every chance that they would lose their job. It was also possible that their name and even photo would appear in the local newspapers.
At 1.20 am on Saturday 28 June, the patrons of the Stonewall Inn were interrupted in their revelries by the announcement: “Police, stay where you are! We are taking the place!” Eight Police Officers, both uniformed and in plain-clothes, then entered the Bar and as usual everyone was ordered to line up and those suspected of being men in drag were then taken into a back room where their true gender would be confirmed by a female police officer. On this occasion however there appears to have been a series of altercations as some tried to push their way past the police whilst others fled through the windows. The operation was not going as smoothly as normal and the police called for back-up.
In the meantime, a crowd had begun to gather outside the Stonewall Inn and many of those who had earlier been released now refused to leave the scene. The police responded by trying to manhandle the crowd but a drag queen who had been violently shoved by a policeman reacted by attacking him with her handbag.
Shortly after a lesbian who had been handcuffed refused to be led into a police van and struggled so violently that the police officer who was escorting her had to resort to striking her repeatedly with his truncheon. Forced to the ground and bloodied she cried out to the others: “Why don’t you guys do something?” Some in the crowd now began to throw coins chanting – here’s your pay-off. Incensed the police went into the crowd lashing out wildly with their batons as they did so. 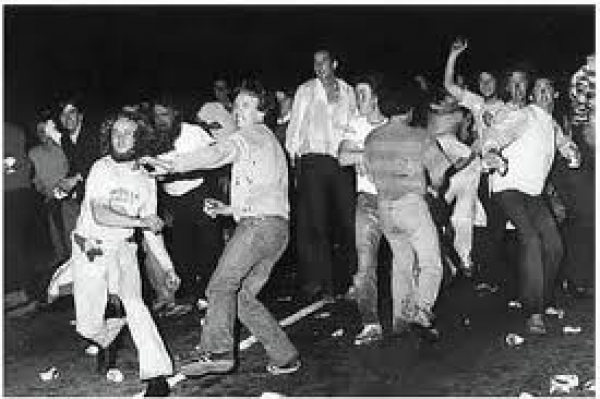 The crowd dispersed temporarily but were to return not long after having raided a nearby construction site for bricks, iron bars and anything else that could be used as a weapon and the police soon came under a barrage of bricks, bottles, and garbage cans.
Individual scuffles broke out and many witnessed the unusual sight of a burly policeman being floored with a single punch by a striking looking woman with large hands. There were to be many such scenes. As one eyewitness recalled: “There was a cop on his stomach in his tactical uniform with a drag queen straddling him. She was beating the hell out of him with her shoe, whether it was a high heel or not, I don’t know, but she was beating the hell out of him. It was hysterical.”
The crowd outside the Stonewall Inn now numbered more than 600 and the scene was one of utter chaos as missiles descended and police vans were attacked and overturned. Outnumbered the police had lost control of the situation.
Taking some handcuffed prisoners with them they retreated back into the Stonewall Inn and barricaded themselves in where they were effectively besieged as the furious mob tried to batter the doors down whilst some others using lighter fuel tried to set the building alight.
Fearing for their lives the police took out their guns and threatened to open fire. They were utterly bemused, this sort of thing simply didn’t happen – Fags don’t fight back!. 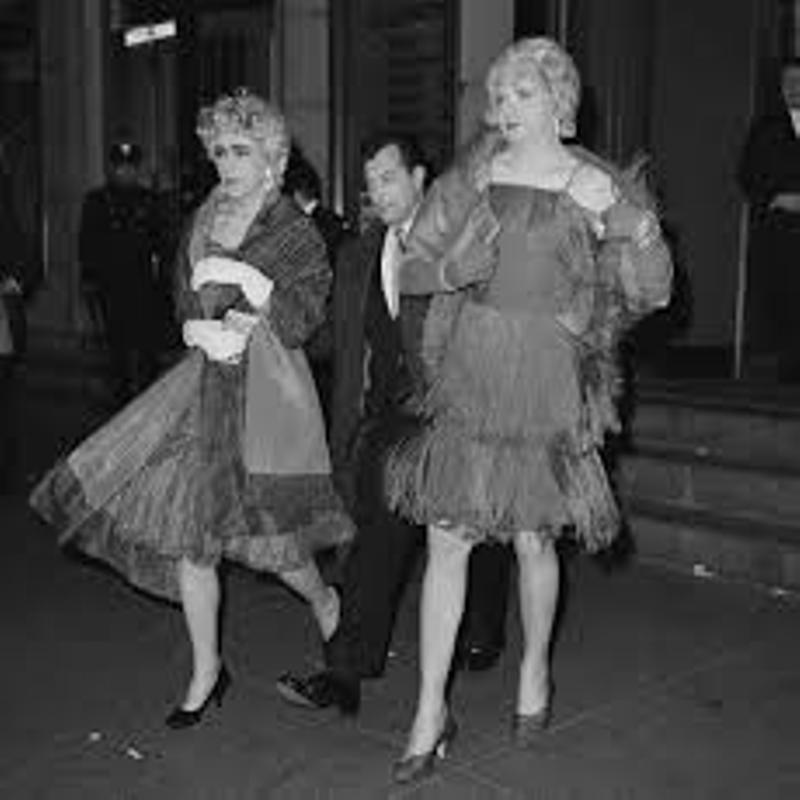 The police officers barricaded in the Stonewall were to remain under siege for about 45 minutes before reinforcements in the form of the Riot Squad arrived. Even then the crowd refused to disperse. Indeed, in a rare moment of comedy on a violent and fractious night some of the drag queens formed a chorus line and high-kicking as they did so sang: “We are the Stonewall Girls and we wear our hair in curls.” The police were not amused they had been humiliated as they saw it by a bunch of fairies.
By 4 am it was all over and the streets had been cleared, but the riots were to resume the following night. This time there had been no direct provocation instead this was the Gay Community asserting itself – this was their village and they’d had enough. There continued to be sporadic violence over the next few nights before it finally petered out.
The Beat Poet Allen Ginsberg, who in support of the Gay Community visited the Stonewall Inn not long after, remarked to a friend: “You know, the guys there were so beautiful – they’ve lost that wounded look that all fags had ten years ago.”
The Stonewall Riot and the events that followed over those few muggy June nights were the beginning of the Gay Liberation Movement. No longer would homosexuals be cowed, no longer would they seek just to be left alone, or to gain some officially endorsed respectability. They would be loud and they would be proud, and they would be visible.
It was to be the beginning of a journey, for good or ill, things would never be the same..
Tagged as: Modern
Share this post: