The Story of Salome

Posted on 19th July 2021
Salome the long haired, dark eyed seductive temptress of Biblical lore was a selfish and foolish young woman or so it was said. She was the daughter of the formidable and vengeful Herodious and the step-daughter of Herod Antipas the son of Herod the Great and ruler of Galilee.
More fond of fine clothes, wine and the delights of the table than he ever was of power Herod Antipas ruled Galilee as a client State of the Roman Empire but a weak man he did so with a velvet glove preferring to turn a blind eye to problems rather than confront them. But Judea was a troublesome place.
One man whose influence was growing all the time was John the Baptist, a prophet of the as yet unrevealed religion of Christianity. He baptised converts in the waters of the River Jordan and they flocked to him in their thousands believing him the long awaited Messiah something he refuted time and again declaring – there is a man greater than I.

When a young carpenter named Jesus came to him for baptism John fell upon his knees: “Here is the Messiah”, he said, and then adding, “A Messiah must be without sin, and I am not worthy.” He refused to carry out the baptism. But Jesus insisted: “I must be baptised by you.”
Following the baptism of the man from Nazareth, John told his followers that he was no different to them and that Jesus must now become greater than he. Many of John’s former acolytes did not take kindly to his words and they turned upon him declaring that he was a fraud and a charlatan but Jesus admonished them: “John is a bright and shining lamp, and you were willing to rejoice a while in this light.”
With the support of Jesus, John the Baptist not only maintained his followers but increased them and he continued to be, as he had always been, an outspoken and vocal critic of the rule of Herod Antipas and the malign influence of his family. Herod had him closely watched but typically did nothing his wife however was made of different stuff.
Herodious had divorced Herod’s brother to marry him, something that was unheard of in ancient Jewish society. Not only that but she had done so for selfish reasons, for wealth and power. John the Baptist accused her of violating Old Testament Law and condemned the marriage accusing Herodious of being no Queen but simply an adulteress and a whore.
The loathing was mutual and Herodious cared not that John was a Man of God and she thought her husband weak for not dealing with him harshly. Under pressure from his wife Herod reluctantly had John the Baptist arrested and imprisoned but she knew that he would not dare punish him.
She was right, and he had already tried to pass the problem onto the Roman Governor of Judea Pontius Pilate who returned John to Herod’s custody declaring that it was a Jewish problem and had nothing to do with him. But if Herod would not act then Herodious would, and her means of doing so was to be her daughter, Salome. She knew that her husband was in thrall to his voluptuous young step-daughter and could deny her nothing especially when drunk. 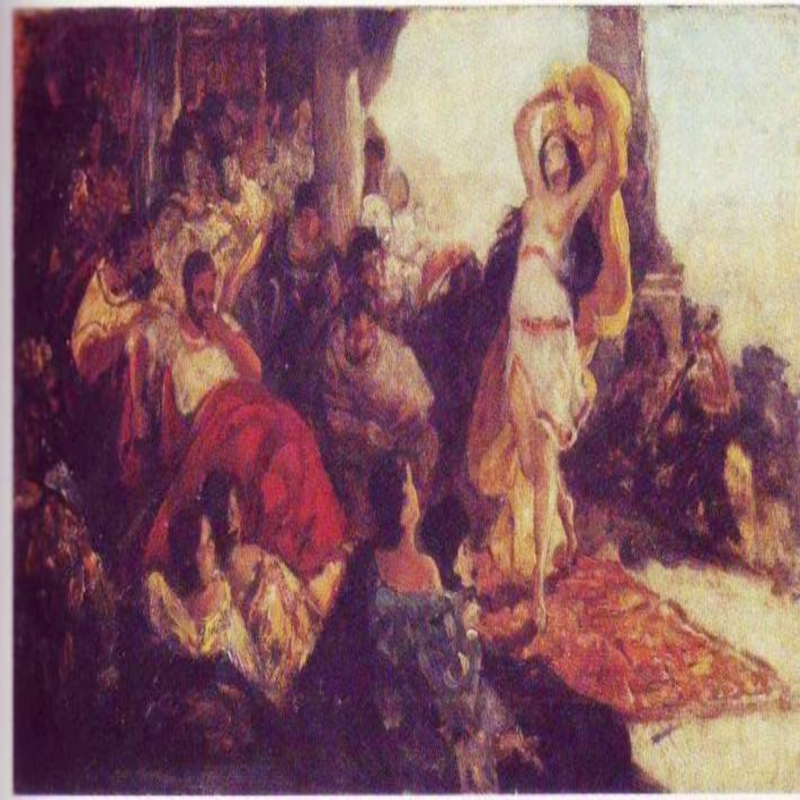 Salome loved to dance and never more so than when it was done for the entertainment of men and she was famed in particular for her Dance of the Seven Veils – it was erotic, seductive, and irresistible.
It was the night of Herod’s birthday and the celebrations were even more lavish than usual lasting long into the night. Salome would dance for Herod and his guests but not until late and when she did so it would be with a force and fervour never seen before.
According to the Gospel of St Matthew: “The daughter of Herodious danced before them, and pleased Herod. Whereupon he promised with an oath, to give her whatsoever she would ask of him. But she being instructed by her mother said, “Give me here on a dish the head of John the Baptist.” And the King was struck sad: yet because of his oath, and for them that sat with him at the table, he commanded it to be given. And so his head was brought on a dish, and it was given to the damsel, who presented it to her mother.”
A similar account occurs in the Gospel of St Mark, though in neither do they mention Salome by name. Yet her existence and her lineage are confirmed in the writings of the Jewish historian Josephus. 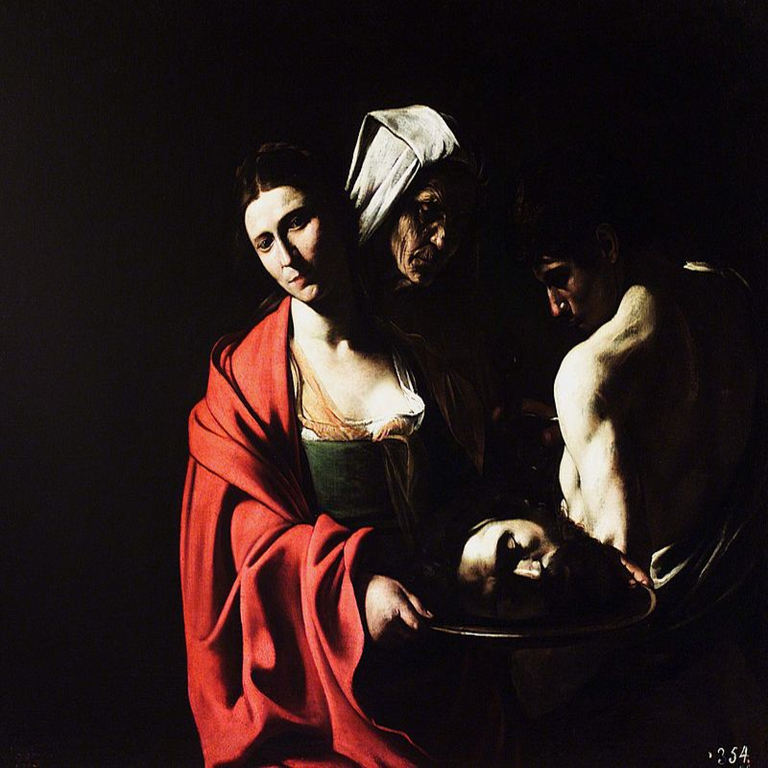 Herodious was delighted, John the Baptist was dead, but Jesus of Nazareth was not and he continued to preach his message of peace until he too was arrested. Yet again Herod Antipas tried to evade responsibility by passing Jesus onto Pontius Pilate who once more washed his hands of the problem declaring that it did not fall within his jurisdiction.
Brought before Herod and questioned as to his background and activities Jesus remained largely silent only responding occasionally and tersely.
Mocked by Herodious and threatened with the same fate as John the Baptist, Jesus remained unmoved. When they demanded that he perform one of the miracles for which his fame had spread, he again refused.
He was no magician after all, and those present burst out laughing but the calm authority Jesus had displayed throughout a charade designed to humiliate him had unsettled Herod who once again set him to Pontius Pilate.
Herod Antipas and Herodious were later summoned to Rome where at the prompting of his sly and ambitious nephew Herod Agrippa the Emperor Caligula stripped him of his Title and his Kingdom
.
Neither Herod Antipas nor Herodious were ever permitted to return to Galilee but were instead exiled to Gaul but then given the reputation of Caligula they were perhaps fortunate to escape with their lives.
But what became of Salome? 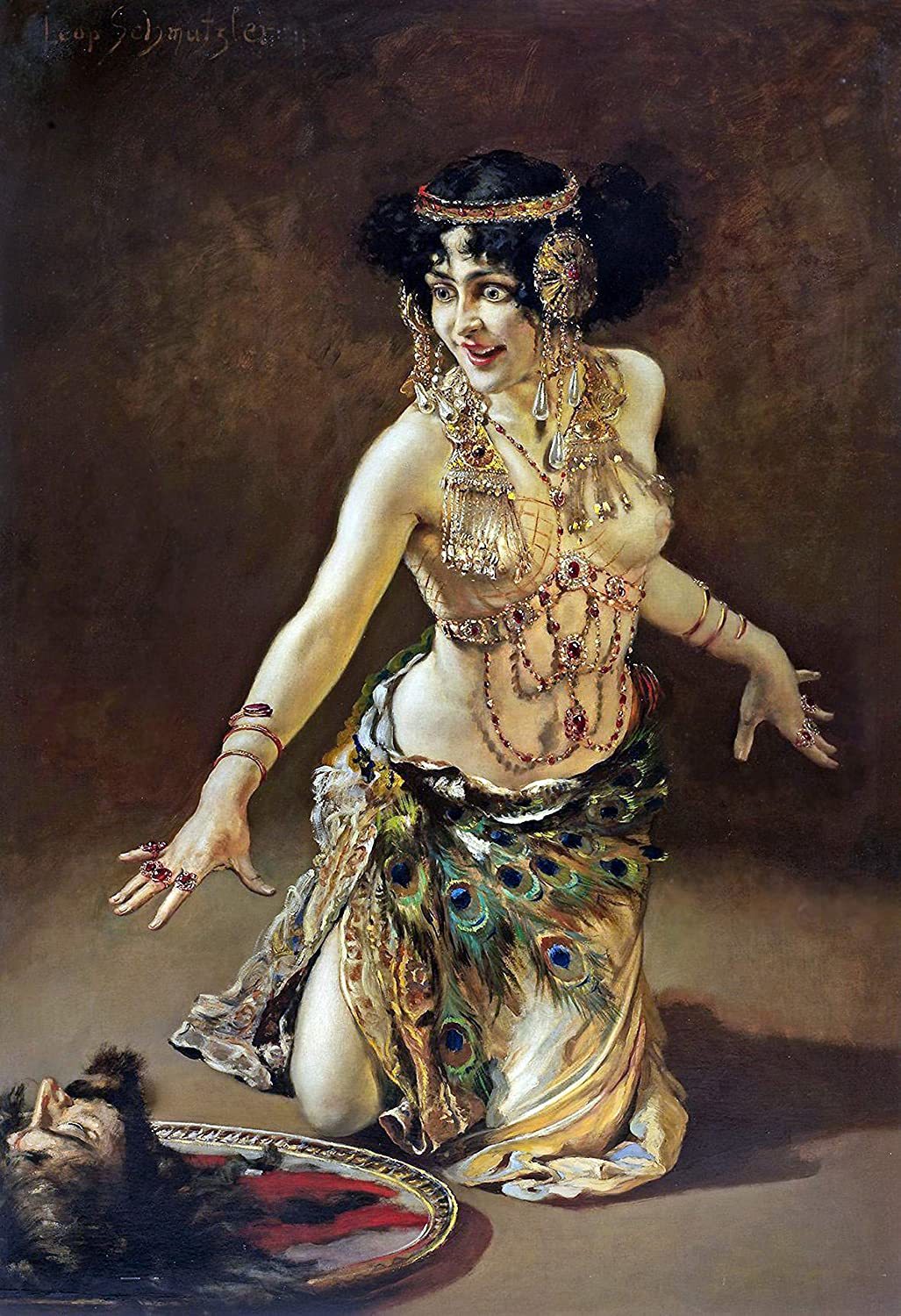 It is written that she remained in Galilee, married, and had children of her own but there was also a woman named Salome at the Crucifixion of Christ and then later present at His Resurrection – was it the same Salome? Did she see the light and repent?
It is widely believed not and that the name of the woman present was merely a coincidence, but that we can never know for sure.
Aside from depictions of The Crucifixion and The Last Supper few Biblical references have inspired artists and writers more than the Story of Salome: the young woman able to bend a man to her will through expressions of her femininity either physical or merely suggestive to induce intense feelings of both lust and fear in equal measure that have from Pandora to Eve and the Witch Craze seen measures taken to condemn, blame, and restrain the female sex prey as men are to a Delilah, a Jezebel or a Mata Hari.
It is the eternal struggle between man and woman where the morality of sex and death is often blurred and bloody both of body and mind.
From more traditional Biblical representations to the self-mortifying art of Caravaggio, the beauty in decadence of Oscar Wilde, the satirical eye of Aubrey Beardsley, the grandeur of Opera and the all seeing lens of the camera Salome lives on in that Dance of the Seven Veils which elicits all you need to know about our world and the people who inhabit it:
Tagged as: Ancient & Medieval, Women
Share this post: