Posted on 17th January 2021
On 17 April 1912, three days after the RMS Titanic had struck an iceberg and sunk in the North Atlantic with great loss of life the CS Mackay-Bennett (soon to become known as the Morgue or Hearse Ship) set sail from Halifax, Nova Scotia on behalf of the White Star Line to recover what bodies they could. Due to heavy fog and rough seas it was to take them a further four days to reach the Titanic’s last estimated location.
In an operation lasting a week 306 bodies were recovered 116 of which were re-committed to the sea. Upon the Mackay-Bennett’s return to Halifax its Captain Frederick H Lardner provided an account of which this is an extract: 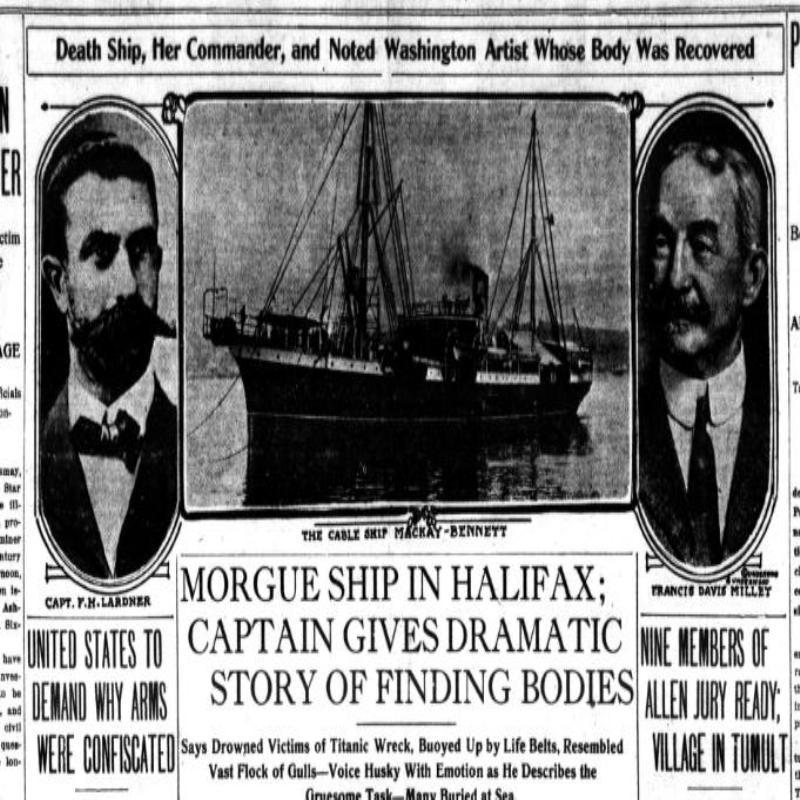 We reached the spot where I thought the Titanic had sunk just after the first watch began, and we shut down and let the ship drift with whatever current chose to carry her, on the theory that where the ship would be carried there we would find the bodies.
One pack of bodies we sighted at a distance looked like seagulls swimming on the water, the flapping in the breeze of the loose ends of their lifebelts making the resemblance to wings almost complete. When we bore down upon them the bodies looked like swimmers asleep. They were not floating but bolt upright, with heads up. The arms were outstretched, as if supporting the body. All faced one way, the way they were drifting.
We saw a big berg when we made this pack. It may have been the berg that sunk the liner. She was long and low-lying, rising perhaps 125 ft, or maybe 160 at her highest point which was well in from a bunch that sloped into the water. It was surrounded by wreckage and several bodies. The bodies were floating some near together, some far apart. There seemed no order among them and none were hand-in-hand or had embraced as some might imagine they would.
There were doors, chairs, and wood from the Titanic spread over thirty miles. We found a broken empty lifeboat upside down with a few bodies near it. It was a flat boat of the collapsible type. We found no sign of shooting on any of the bodies. We found several men in evening dress, but found no bodies lashed to doors. Those whom we found it necessary to bury were not men of prominence.
In my opinion the bulk of the bodies are in the ship. I think when she went down the water broke into her with great force and drove them into the hull.
I explain the reason that so many of the bodies picked up were members of the crew because they probably jumped before the ship took the fatal plunge. They were used to the ways of the sea and knew the danger of staying aboard her until the end. The passengers stayed with her and went down with her. They were crushed down in her as they sunk, and deep in her body they are finding their graves.
Those aboard her, the doctors think, were killed almost instantly by the terrible pressure in the vortex. Those who got away died later of freezing, I think few were drowned.
Tagged as: Fact File, Modern
Share this post: