Tomb of the Unknown Warrior

Posted on 27th July 2021
In the summer of 1916 the Reverend David Railton who was serving as an Army Chaplain on the Western Front was in the region of Armentieres when he came across a wooden cross with the simple inscription: “An Unknown British Soldier, of the Black Watch.” It gave him pause for thought knowing that this man’s family would never know his fate or be able to mourn at his graveside.
A little later he wrote to the Commander of the British Expeditionary Force in France, Field-Marshal Douglas Haig suggesting that the remains of an unknown soldier be repatriated to Britain to form part of a public commemoration: “Let this body – this symbol of him – be carried reverently over the sea to his native land.” He received no reply. 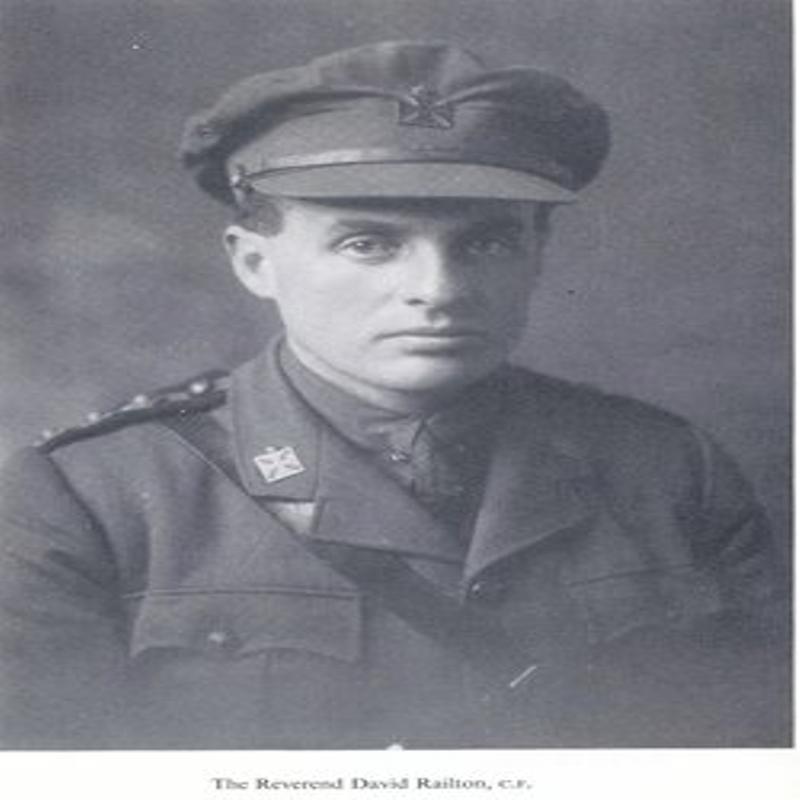 In August 1920, Railton was serving as a vicar in Margate when in a meeting with the Dean of Westminster he repeated his assertion that there should be a public memorial to the unknown-soldier; the Dean listened with interest and said he would pass it on to the Prime Minister David Lloyd George.
Lloyd George was in favour of a public commemoration but he knew there was little appetite in the country for anything that might be seen to glorify the war. When he suggested the idea to the King, George V told him it was unwise to rake up bad memories and that things were best left as they were.
Putting the King’s objections to one side Lloyd George proposed the idea in Cabinet where it was greeted more warmly and in October 1920 the decision was made for a public commemoration to be held on Armistice Day, 11 November. But it remained an issue that would have to be dealt with sensitively.
The First World War had traumatised those involved like no other before it. The industrial scale of its slaughter was unprecedented and the response to its end was mixed, uncertain and confused. The shared experience of death in the trenches had gone someway to breaking down class barriers but there were those who still wished to see social distinctions retained in the honouring of its war dead. If there was to be a ceremonial burial of an unknown soldier of the Great War then at the very least it should be an Officer.
There had already been objections to the decision to leave British and Commonwealth War Dead buried overseas and many had wanted the remains of their relatives identified and brought home with those who could afford it wishing to build memorials of their own.
Similarly the inscription “Known Unto God” penned by Rudyard Kipling who had lost his only son in the war and which appeared on every grave marker of those servicemen whose bodies remained unidentified caused offence for its simplicity and for not indicating the rank of the deceased.
The two minute silence to remember those who died in the Great War was inaugurated in 1919 but was felt by many to be an inadequate response to the scale of sacrifice. Now the decision had been made for a ceremony there would also have to be a monument.
The Cenotaph was designed at the request of David Lloyd George by Edwin Lutyens, the most famous architect of his day who would later also design the Thiepval Memorial in Flanders for the 72,000 dead British and Commonwealth soldiers whose remains were never recovered.
At first a temporary structure it was later reconstructed in Portland stone to serve as a permanent memorial to all those who had lost their lives in the service of their country.
In the first week of November 1920 four squads of British soldiers were despatched to the four main battlefields of the Western Front at Arras, the Somme, the Marne, and Ypres to dig up the remains of a soldier identified only by his British Army uniform.
On 7 November the bodies were then taken to the chapel at Saint Por sur Terroise where they were received by the Reverend George Kendall. The remains were then laid out on a stretcher and draped in a Union Jack.
Around midnight Brigadier-General L.J Wyatt along with Lieutenant-Colonel E.A.S Gell entered the chapel. All others not part of the process were then asked to leave before Brigadier-General Wyatt was blindfolded and led to where the bodies were laid out. He then placed his hand upon one of the stretchers. Two men then placed the body that had been chosen in a wooden coffin ready for transportation back to Britain. The remaining bodies were then reburied following a brief religious ceremony.
The coffin containing the corpse of the Unknown Warrior was guarded overnight by a unit of French soldiers before being taken to Calais where it was placed aboard HMS Verdun and escorted to England by a flotilla of Royal Navy vessels. 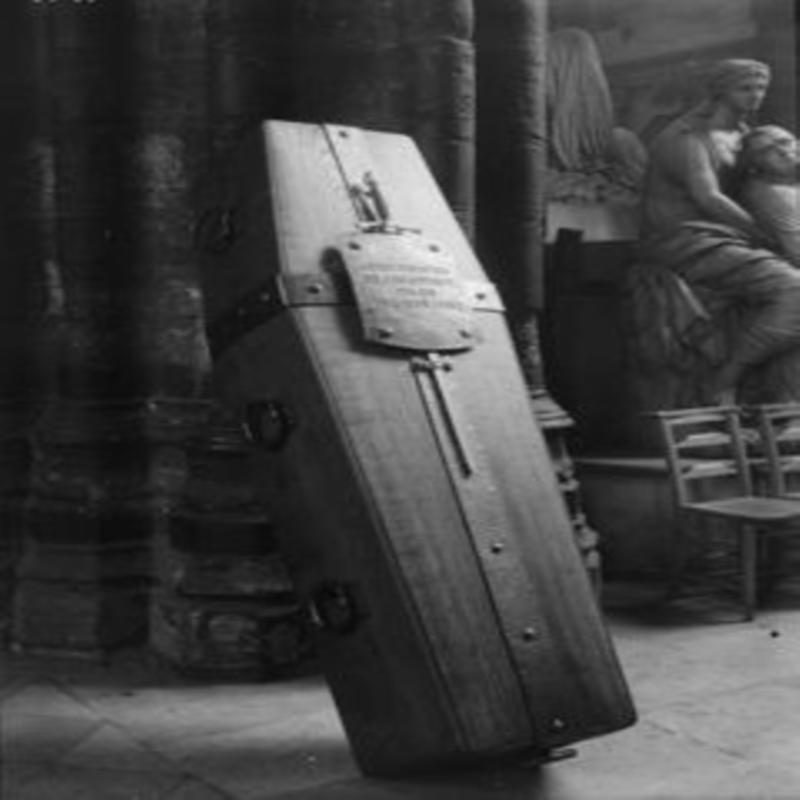 Prior to the ceremony the lead coffin was placed inside another made of oak from a tree grown at Hampton Court and a Crusader’s sword taken from the collection of the Tower of London attached to its lid.
On the morning of 11 November, 1920, two years to the day after the war had ended the coffin of the Unknown Warrior was placed on a gun carriage and drawn in procession through London by six black plumed horses as crowds, many of them ex-servicemen, lined the streets. Upon its arrival at Westminster Abbey, King George V placed a wreath upon it before it was taken inside past a guard of honour made up of one hundred Victoria Cross winners.
Following a religious ceremony and the singing of hymns and saying of prayers the body was taken to its place of burial where the King sprinkled earth taken from the battlefields of Flanders upon the coffin. 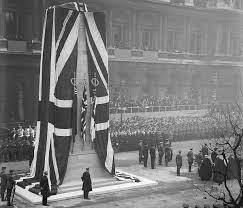 Over the next week more than a million people were to visit the Abbey to pay their respects before on 18 November the Unknown Warrior was at last laid to rest in a grave of French sand under a monument of black marble. The inscription reads: A British warrior who fell in the Great War 1914-18 for King and Country. Greater love hath no man than this.
Armistice Day, though we know it better as Remembrance Day, continues to be commemorated but unlike the Tomb of the Unknown Warrior the annual ceremony at the Cenotaph remains controversial.
Some claim, as Lloyd George feared, that it glorifies war and lends justification to the waging of it; others criticise it for reinforcing rather than eradicating class distinctions with those in whose name wars are fought laying their wreaths first, followed by those who order men to war and then those who command men in battle and that is the men and women who fight wars and make the ultimate sacrifice who get to lay their wreaths last. Almost, the cynical might say, as an afterthought.
Nevertheless, on the eleventh hour, of the eleventh day, of the eleventh month –We Will Remember Them.
Tagged as: Modern
Share this post: