Posted on 28th November 2021
By the 1830’s the English Monarchy was neither much loved nor respected. It had in large part been brought into disrepute by the vain and dissolute George IV who as Prince Regent had been the most loathed man in the country. When he died childless on 26 June 1830 he was little mourned and was succeeded on the throne by his brother William.
The sixty four year old William was by no means as flamboyant as his brother but this did not make him any more respected for as the fourth son of George III he had never been expected to inherit the throne and left to live the life he chose he had sown his wild oats accordingly fathering ten illegitimate children by the Irish Actress Dorothea Bland better known by her stage name Mrs Jordan.
His father was not impressed by William’s relationship with an actress and the ten little FitzClarence’s that had resulted from it but he did not express his disapproval perhaps just relieved that he was settled into a relationship that if not exactly free of scandal and ridicule paled into insignificance alongside that of the Prince Regent. He did however halve his allowance ensuring it was to be an impoverished domestic bliss.
William and Mrs Jordan were to be together for twenty years but as time went by with his two older brothers in ill-health it became increasingly apparent that he might one day succeed to the throne. Yet he still remained unmarried and had no legitimate issue. There was of course no prospect of him marrying an actress and so he and Mrs Jordan separated, though she was always to insist that he had not done so not for dynastic reasons but because he needed the money that could only be acquired through the making of a good marriage.
On 11 June 1818 he married twenty five year old Adelaide of Saxe-Meiningen, a woman more than half his age. She was not to provide him with the hoped for male heir however, tormented as she was by miscarriage and still birth. As a result she was held up for scorn given the fecundity of William’s mistress the so-called actress whore.
The Monarchy had long been fair game for mockery and the satirists had an endless stream of material but William refused to read the scandal sheets as he called them dismissing it all as so much nonsense.
The marriage itself was a happy one and had a sobering effect on William, quite literally for he soon ceased to drink alcohol and perhaps presented with the example of his brothers who had brought their health issues upon themselves he ate frugally and exercised regularly.
When his older brother Frederick, Duke of York, died in 1827 William became the next in line to the throne and was immediately appointed to a position of responsibility as High Lord Admiral.
On 25 June 1830 he was summoned to George IV’s deathbed to be told by him, “God’s will be done. I have injured no man. It will rest on you then.” He was visibly shaken for unlike the rest of the country he was genuinely fond of his brother but he was also excited at the prospect of becoming King. 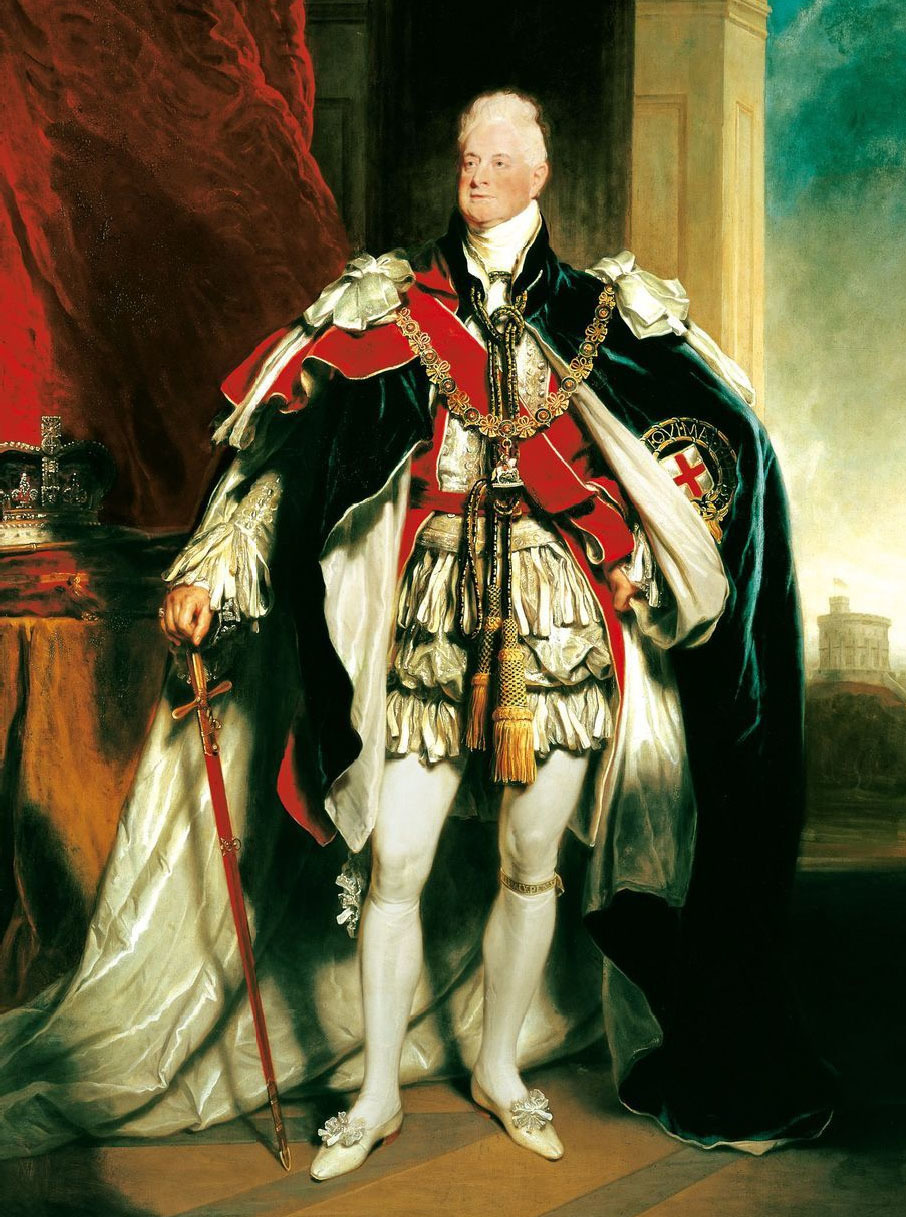 His reign started well, the years he had spent at sea when a young man had brought him into contact with the common people and he was neither afraid to be among them nor did he speak down to them. He was then popular, but a series of political crises were soon to see him portrayed as an obdurate fool and a conservative reactionary.
Earlier he had displayed his innate conservatism by speaking repeatedly in the House of Lords in favour of the slave trade and against its restriction or abolition accusing its advocate William Wilberforce of lunacy, now he tried to prevent the passage of the First Reform Bill that was intended to extend the franchise and abolish the Rotten Boroughs that permitted the election of political placemen. He even went so far as to dismiss the Whig Government and appoint the ultra-conservative Duke of Wellington as Prime Minister and it was only after he failed to form a Cabinet and pro-Reform and anti-Monarchy riots broke out the length and breadth of the country that William was forced to yield.
It was a chastening experience for him and thereafter he stayed out of politics where he could but the damage to both his reputation and that of the Monarchy had already been done. When he died at Windsor Castle on 20 June 1837 respect for the Monarchy had fallen to an all time low.
Though William had fathered many children he had no direct legitimate heir and the succession would fall upon his niece Princess Alexandrina Victoria of Kent who had just turned eighteen.
She had earlier been reduced to tears at the news her beloved uncle was so close to death. Her visits to the Royal Court and time spent with the King had been one of her few pleasures. Nonetheless, she was aware she would soon be Queen and was excited at the prospect. 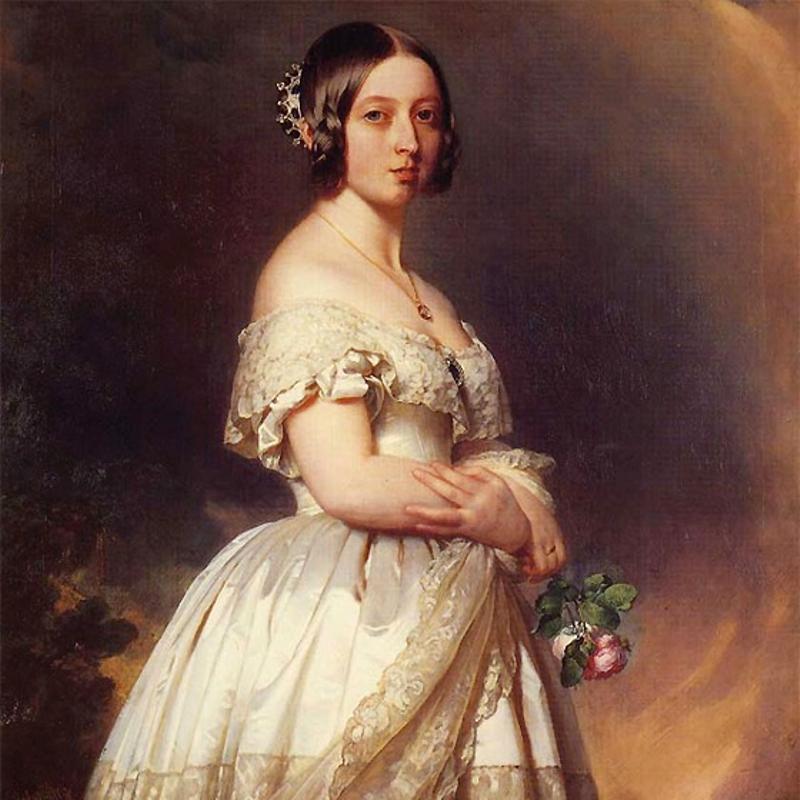 The young Victoria wrote in her journal of the events that momentous night:
“I was awoken at 6 o’clock by Mamma, who told me that the Archbishop of Canterbury and Lord Conyngham were here and wished to see me. I got out of bed and went into my sitting room (only in my dressing gown) and alone, and saw them. Lord Conyngham then acquainted me that my poor Uncle, he King, was no more, and had expired at 12 minutes past 2 this morning and consequently that I am Queen.”
The young Victoria had endured a miserable childhood with every aspect of her life controlled by an overbearing mother and her lover the ambitious Sir John Conroy. She had not been permitted to have friends, play with other children, make arrangements of her own and had to sleep at night in her mother’s bedroom. Her only childhood companions were her dogs and the journal she would maintain throughout her life.
Now as Queen she would assert herself. She would only be referred to as Victoria she told those who needed to know before banishing both her mother and Sir John Conroy from her presence.
Those who knew her were aware how wilful she was and early in her reign almost caused a constitutional crisis when she refused to dismiss her Whig ladies-in-waiting for Tory ladies more favourable to the recently installed Government as was the custom forcing the Prime Minister Sir Robert Peel to resign. She would never change in this regard though her political interventions would be tempered somewhat by her future husband the Prince Consort Albert.
Victoria’ reign would usher in the most transformative period in Britain’s history that would see it change from a rural economy to the world’s first great industrial nation and by the time of her Diamond Jubilee sixty years later she would be mother to the royal families of Europe, Empress of the greatest Empire the world has ever seen and had given her name to the era that spanned the duration of her reign.
Tagged as: Monarchy, Victorian, Women
Share this post: