Posted on 17th January 2021
As the Duke of Wellington is believed to have said the Battle of Waterloo was won on the Playing Fields of Eton - those who have a stake in society will fight to preserve it, those who play the game play it to win. It was the Victorian ethos to believe that the preservation of the Empire depended upon a belief in God and the masculine virtues learned in the sporting arena.
No poem reinforces this view better than Vitai Lampada with its emphasis on duty, commitment, comradeship discipline and selflessness written in 1892 by the lawyer and academic Henry John Newbolt. 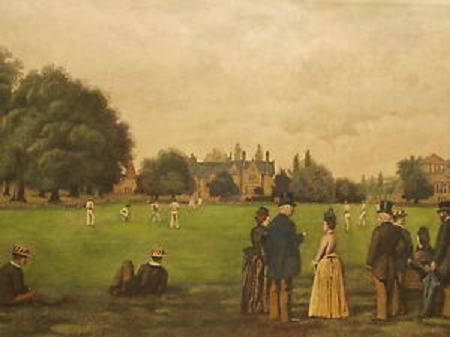 Making reference to the Battle of Abu Klea in 1885, and the attempt to rescue General Gordon at Khartoum, Newbolt draws direct parallels between the cricket pitch as an arena of conflict and the battlefield. That those lessons learned as a child in play would serve the Empire well in times of conflict. Sporting virtues are martial virtues.
It may take a leap of the imagination for us today to understand why this poem along with Kipling’s If, and Tennyson’s Charge of the Light Brigade and so many others written with a moral and for a purpose would have been known by heart by every school child in Victorian Britain. And that can only be to our detriment.

Vitai Lampada
There's a breathless hush in the Close to-night
Ten to make and the match to win
A bumping pitch and a blinding light,
An hour to play and the last man in.
And it's not for the sake of a ribboned coat,
Or the selfish hope of a season's fame,
But his captain's hand on his shoulder smote
"Play up! play up! and play the game!"
The sand of the desert is sodden red,
Red with the wreck of a square that broke;
The Gatling’s jammed and the Colonel dead,
And the regiment blind with dust and smoke.
The river of death has brimmed his banks,
And England's far, and Honour a name,
But the voice of a schoolboy rallies the ranks:
"Play up! play up! and play the game!"
This is the word that year by year,
While in her place the school is set,
Every one of her sons must hear,
And none that hears it dare forget.
This they all with a joyful mind
Bear through life like a torch in flame,
And falling fling to the host behind
"Play up! play up! and play the game!"
Tagged as: Poetry, Victorian
Share this post: