Posted on 27th December 2020
Julia the Elder was born on 30 October 39BC, the only biological daughter of Octavian (later Augustus, first emperor of Rome) and his wife Scribonia. Augustus divorced Scribonia within a few days of Julia’s birth to marry Livia.
Augustus took over parental control of Julia and she was given a strict upbringing however he was very fond of her and made sure that she was well educated.
Julia was first married at age fourteen to her cousin Marcus Claudius Marcellus, but this marriage did not produce any children and Marcellus was to die two years later.
She married again aged eighteen in 21BC, becoming the third wife of Marcus Vipsanius Agrippa, her father’s most trusted friend and loyal general. This marriage produced five children and in 17BC Augustus adopted their two eldest sons, Gaius Caesar aged three, and new born Lucius Caesar. He was then to control their upbringing and education with a view to them being his heirs.
While Julia was pregnant with their fifth child, Agrippa died suddenly in 12BC, Julia, however was not to be given long to mourn her husband. 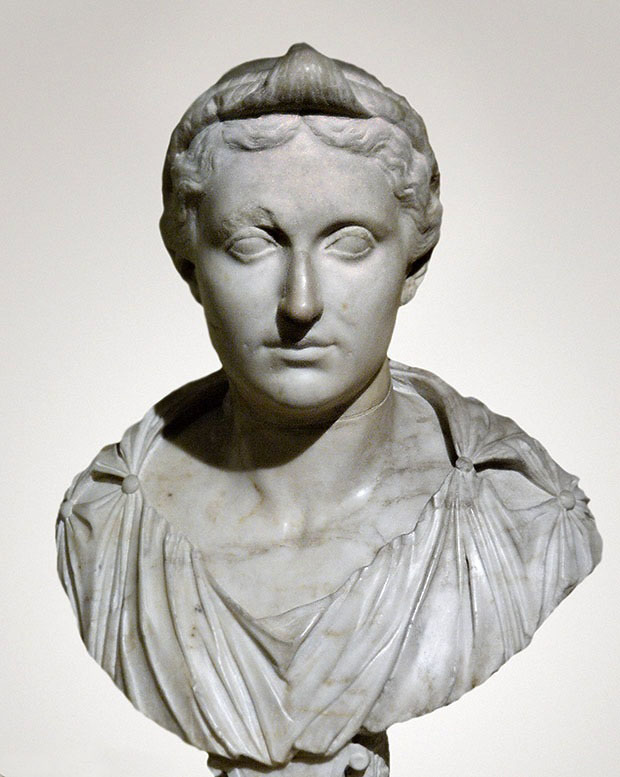 Augustus was manipulated by his wife Livia to marry Julia to her son, and Julia’s step-brother Tiberius. This marriage was not wanted by Tiberius, but Augustus insisted he divorce his current wife and marry Julia.
This was not a happy marriage and it did not take long for them to live apart and lead separate lives. Julia was not faithful to her husband and is known to have had many adulterous affairs which were common knowledge in Rome. Her scandalous behaviour was to infuriate her father who believed in and promoted family values to his people.
In 2BC Julia was arrested for adultery and treason, however Augustus was reluctant to execute his own daughter. Finally, he decided to exile her to the island of Pandateria (modern day Ventotene), her mother Scribonia accompanied her there.
Her exile was harsh and strictly enforced with visitors only allowed if permission was first given from Augustus. Julia lived like this for five years before her father relented and allowed her to return to the mainland, however he was never to forgive her behaviour and she was not allowed to return to Rome, living her life in Rhegium (Reggio Calabria).
Julia the Elder died of malnutrition late in 14AD, after the death of her father Augustus. Rumours abound that she may have been starved to death on the orders of her husband Tiberius, the new emperor, in revenge for her adulterous behaviour.
Usually she would have been buried in the Mausoleum of Augustus, however Augustus had given strict instructions against this at the time of her exile.
Tagged as: Junior Ancient Rome
Share this post: