Seven Wonders of the Ancient World

Posted on 16th January 2023
These are the original Seven Wonders of the Ancient World from the period known as Classical Antiquity. 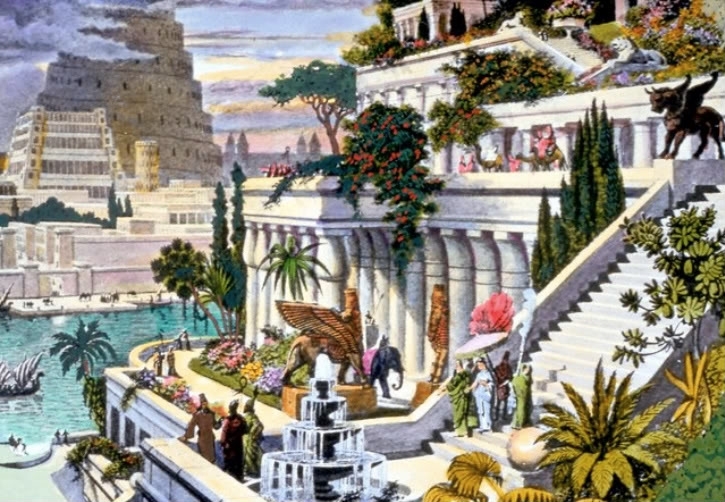 The Hanging Gardens of Babylon
The Hanging Gardens of Babylon are said to be one of the most beautiful manmade gardens ever created, although many people believe they are purely mythical and did not exist at all.
Although there is some doubt, most people believe the Hanging Gardens were built by King Nebuchadnezzar II in 600BC for his wife Queen Amytis. She was used to living in a mountainous region with lush green hills and valleys, and the flat, dry landscape of Babylon made her pine for her homeland.
The gardens were a series of multi-level stone terraces planted with shrubs, trees and vines. The plants would cascade down and make it look like they were hanging in the air. This became quite a feat to make sure the plants were well watered and the gardens had an irrigation system fitted.
Ancient Greek and Roman Scholars said that ‘it represented a romantic ideal of an eastern garden’. 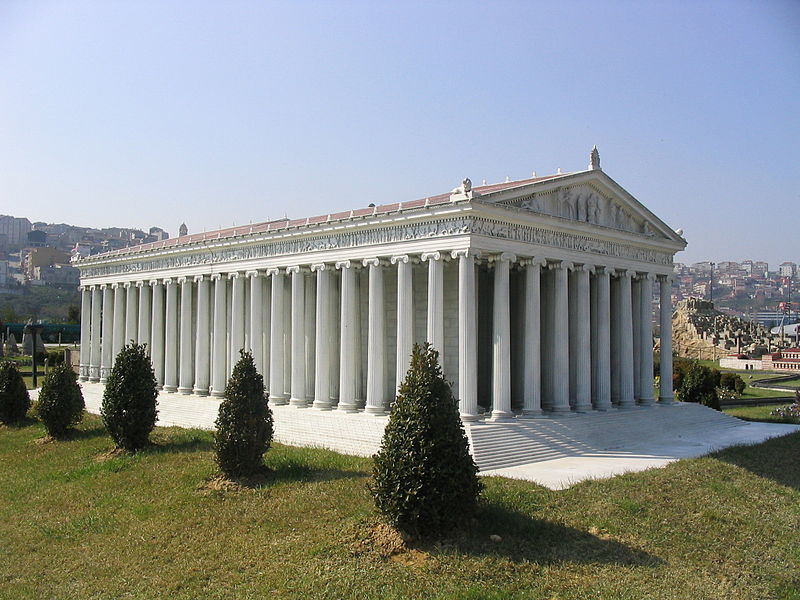 Temple of Artemis at Ephesus
The Temple of Artemis was built as a dedication to the goddess Artemis, one of only three maiden goddesses of Olympia. It was located in Ephesus (near modern day Selcuk in Turkey).
The temple was first built around 800BC, but was destroyed by a flood. It was then rebuilt and completed around 550BC by Cretan Architect, Chersiphron and his son Metagenes. The temple was made of marble and was 115 metres (377 feet) long, 46 metres (151 feet) wide and the columns stood 3 metres (40 feet) high. There were around 120 columns set in two rows and many of these had raised carvings.
This rebuild was destroyed in 356BC by arson, and then a further rebuild was started in 323BC.
Each time the temple was rebuilt it became larger and more impressive. It was a beautiful marble structure and it is said that the final temple was four times the size of the original.
This temple stood for over 600 years but was destroyed by Goths (East Germanic People) in 268AD.
The temple was not to be rebuilt again; all that remains now are foundations and ruins. 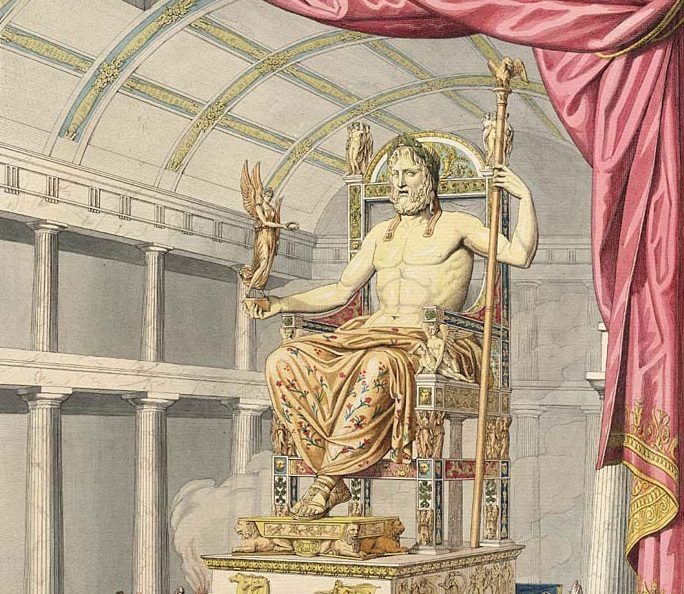 Statue of Zeus at Olympia
This is one of the most famous statues of the ancient world. It was created to honour Zeus to whom the Olympic Games were created and held every four years.
The statue was carved by Greek sculptor Phidias and was a giant seated figure about 13 metres (43 feet) tall and 6 metres (21 feet) wide. It was built around 435BC at the Sanctuary of Olympia in Greece, in the Temple of Zeus, and took about 12 years to complete. It is said that the statue almost reached to the top of the temple itself.
The statue represented Zeus sitting on an ornate throne made of cedar wood covered in ivory plates and gold panels. These were inlaid with ebony, ivory, and precious stones and had carvings of gods and heroes of Greek mythology. The statue of Zeus itself was made of ivory, with his robe, beard and sandals made of gold.
In his left hand Zeus held a sceptre with the head of any eagle and in his right hand stood a life size statue of the goddess of victory Nike. He also wore an olive reef made of silver.
There is doubt over the destruction of the statue of Zeus at Olympia. One tradition states that it was moved to Constantinople (modern day Istanbul) and destroyed by fire around 475AD. Another states it may have been lost at the same time as the temple in 425BC. 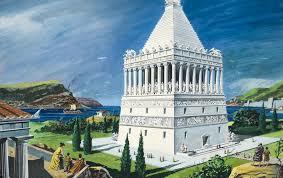 Mausoleum of Halicarnassus
The satrap (governor and ruler) Mausolus decided to make Halicarnassus (modern day Bodrum in Turkey) the capital of his territories.
Following his death in 353BC his wife Artemisia decided to build a tomb as a tribute to him. Artemisia unfortunately did not see the completion of the tomb as she died two years after her husband.
Artemisia employed the most talented artists of the time to build the tomb and it was erected on a hill overlooking the city and sat in an enclosed courtyard on a stone platform. The tomb was built of brick covered in white marble and stood 45 metres (148 feet) tall.
Stone lions stood by the staircase that led to the top of the platform and statues of gods and goddesses stood along the outer courtyard wall. Each corner of the tomb was guarded by stone warriors on horseback. From the centre of the platform stood a square tapering block of marble reaching to a third of the overall height of the tomb. This marble block was covered in raised sculptures.
On the top of the tomb stood 36 slim columns in a square taking another third of the height. Then finally the roof that stood in the shape of a pyramid. On the top of the pyramid was four horses pulling a chariot in which rode images of Mausolus and Artemisia.
The Mausoleum of Halicarnassus was destroyed by successive earthquakes from the 12 – 15th Century.
The word Mausoleum we use today derives from Mausolus. 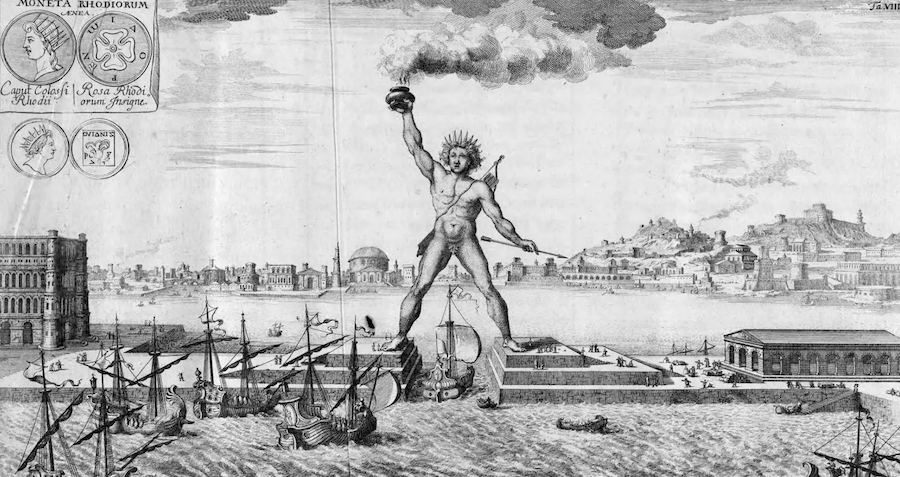 Colossus of Rhodes
The Colossus of Rhodes was a statue of the Greek titan god of the sun Helios. It was constructed to celebrate victory over Antigonus I Monophthalmus (ruler of Macedonia in Cyprus) in 304BC.
Antigonus, a general under Alexander the Great had sent his son Demetrius to attack Rhodes in 305BC in a war that lasted one year. When Antigonus’ army abandoned Rhodes, they left behind most of their equipment. Much of the iron and bronze used to build the statue was reforged from weapons left behind from the war.
The statue was constructed by Greek sculptor Chares of Lindos. Construction started in 292BC and took 12 years to complete.
Iron tie bars were used over which brass plates were fixed and the interior was filled with stone blocks. The feet of the statue were carved in stone and then covered in bronze plates. Eight iron bars were used for the ankles and legs. These were then covered in brass plates to form the skin.
The statue stood over 30 metres (98 feet) tall, on a 15 metres (49 feet) white marble pedestal. It was one of the tallest statues of the ancient world.
The statue lasted 54 years, but was broken at the knees by an earthquake in 226BC. The remains were still impressive and many travelled to see them for over 800 years. 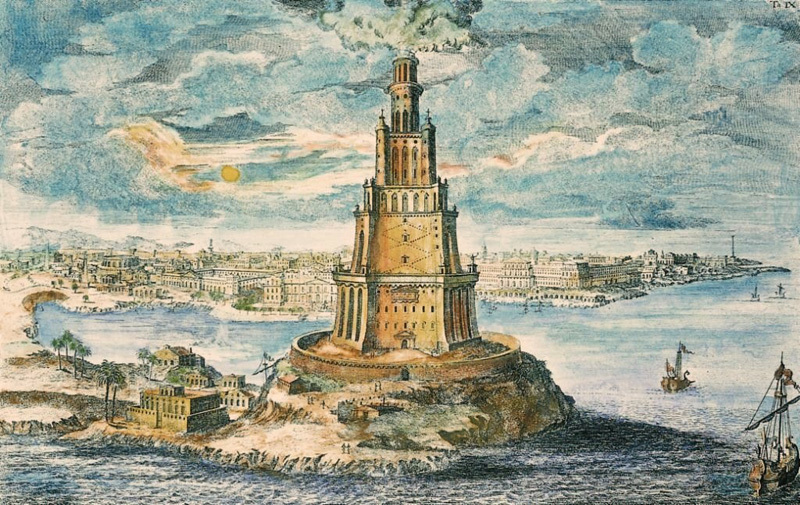 Lighthouse of Alexandria
The Lighthouse of Alexandria was built on the island of Pharos in the harbour of Alexandria. It was built between 280 – 247BC and was between 120 – 137 metres (298 – 450 feet) tall. It was one of the tallest manmade structures for many years and the third longest of the ancient wonders to survive.
The Lighthouse was constructed in the third century BC by Ptolemy I Soter, after he announced himself King in 305BC, following the death of Alexander the Great. It took twelve years to build and was completed during the reign of his son Ptolemy II Philadelphus.
The Lighthouse was built with solid blocks of limestone that were sealed together using molten lead. It had three separate sections. The base was square with a central core, the middle section was octagonal and the top was a circular section with a mirror that reflected light. At night time a fire was lit that shone from the mirror. Legend has it that Ptolemy I Soter had the lighthouse built to guide ships into port at night.
Coins that were minted at the time show statues of a triton at each of the four corners. They also show a statue on the top that is believed to have been either Poseidon or Zeus.
Over time the Lighthouse became badly damaged and following three earthquakes in 956AD, 1303 and 1323AD it just became an abandoned ruin.
In the town of Abusir some 48 kilometres (30 miles) from Alexandria, there is a funerary monument ‘The Pharos of Abusir’ that is believed to have been built in the same style as the Lighthouse, although on a smaller scale. This monument is well preserved. 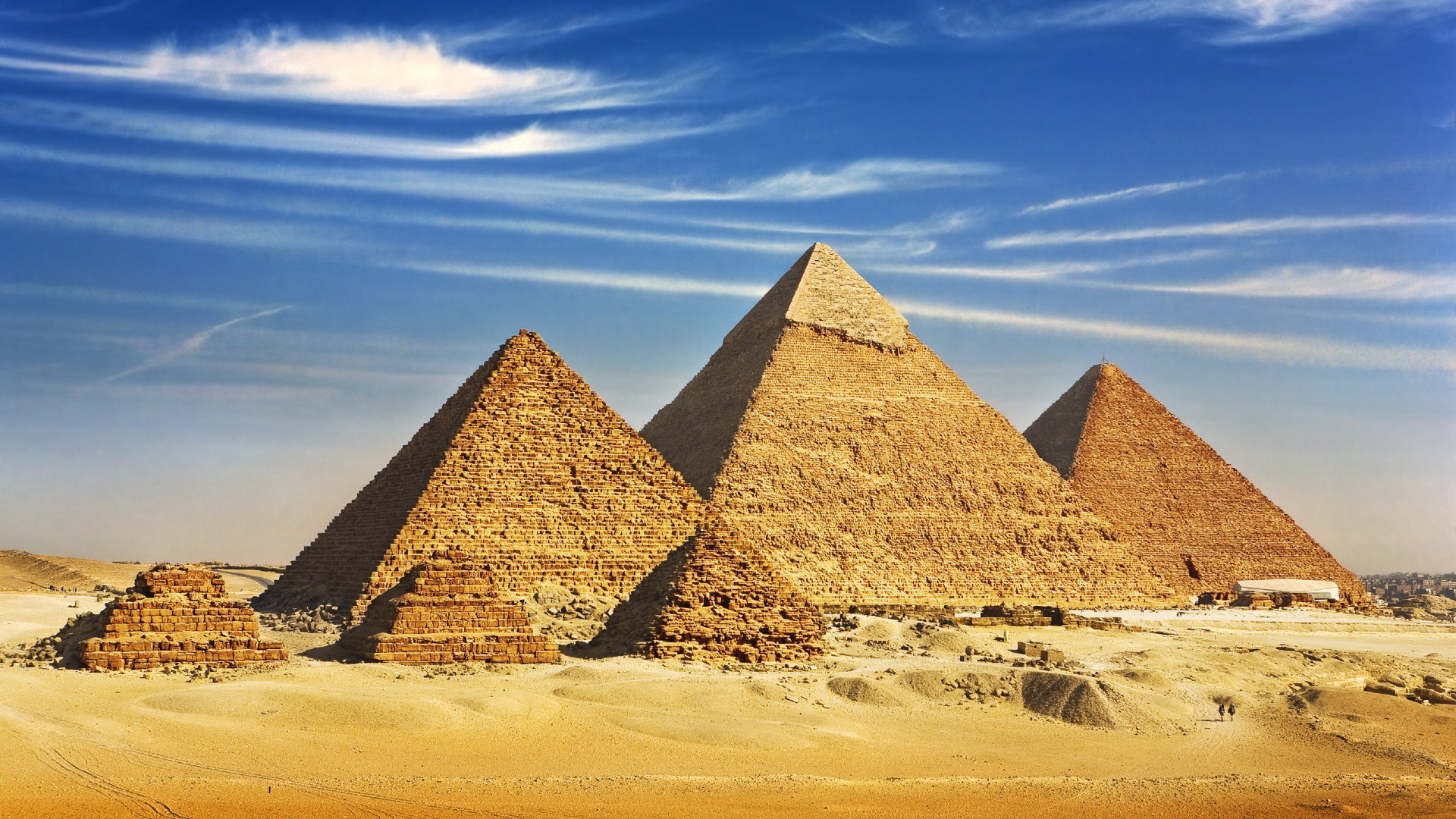 Great Pyramid of Giza
The Great Pyramid of Giza (Khufu) is the largest of three pyramids that also includes Khafre and the smallest Menkaure. It was built around 2550BC and borders what is now El Giza in Egypt.
It is the oldest of the seven wonders but still stands today. The belief is that it was built as a tomb for the Fourth Dynasty Egyptian Pharaoh Khufu.
It was the tallest manmade structure in the world for over 3,800 years and was originally about 147 metres (481 feet) tall, but due to erosion over the years, it is now around 139 metres (456 feet) tall.
As the largest pyramid ever built, it took 20,000 workers over 20 years to construct it and over 2.5 million stone blocks were used in its construction. The blocks were originally encased in polished and smooth white limestone.
The sides of the pyramid are accurately set to the four cardinal points of a compass and the original entrance is on the north side about 18 metres (59 feet) above the ground, a further entrance is also to be found.
The entrances lead to the Grand Gallery and further passages and stairwells lead to the three burial chambers. The first chamber is underground, the second named the Queens chamber in above ground and the third positioned higher still is the Kings chamber.
A sphinx stands, guarding the pyramids at Giza. It has the body of a lion and the head of a Pharaoh.
It is uncertain how the pyramids were built but it is believed with the advancement of science today, society would still be unable to replicate the construction of a pyramid.
Tagged as: Junior Ancients (general)
Share this post: