Anne Bonny: A Pirate of the Caribbean

Posted on 28th February 2021
The years 1640 to 1720 were the Golden Age of Piracy. Many of the names with which we are familiar today such as Edward Teach (Blackbeard), Captain Henry Morgan and William Kidd were active during this period, and any ship laden with cargo leaving the shores of North and South America ran a high risk of never making it beyond the Caribbean.
Many pirates operated out of the Island of Tortuga just off the coast of Haiti. It was a place populated by cutthroats and thieves where deals were struck and murder was commonplace. Indeed, it was so unruly that the French Governor of the Island imported 1,650 prostitutes from Europe in the hope that the ready availability of sex would go some way to tempering the pirates proclivity for robbery and violence. It made little difference, the opportunity for plunder on the trans-Atlantic trade routes were just too lucrative and the lure of the flesh only went so far in deflecting them from their endeavours especially when some of those ships sailing to Spain were carrying gold bullion. 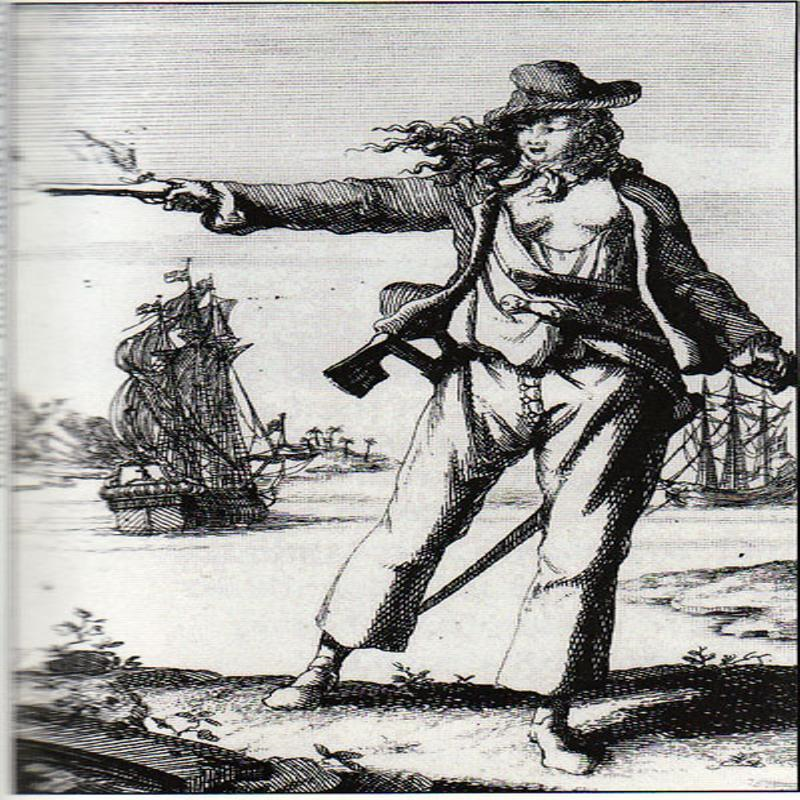 Some of the more successful pirates invested their money, began trading in slaves and building plantations. Others returned to Europe their pockets laden with jewels and their ships packed with contraband goods to sell on the black market. Many others would end up swinging from the end of a gibbet. It was a violent, ruthless, and barbaric business and it was a man’s world. But one from which women were not entirely excluded, one such woman was Anne Bonny.
Anne Bonny (nee Cormac) was born in Kinsale, Ireland, on 8 March, 1702. She was by no means the scion of an impoverished family. Her father, William Cormac, was a successful lawyer, though his wealth was not entirely his own with much of it coming his way courtesy of his wife. William was, however, a philanderer and Anne was the result of an affair he had with his maid, Mary. William’s wife, also named Mary, and also having an affair, was suspicious that her husband was up to no good. Once she’d had her suspicions confirmed she contrived to have Mary arrested, accusing her of stealing some spoons. Vengeance may have been sweet but it did not end the affair and not long after Anne was born.
As the proprietor of a successful law firm it was important for William to maintain an image of respectability so Anne’s birth was kept a secret and she was raised by people William paid to maintain that secret. Around the age of twelve she was smuggled back into the household disguised as a servant boy.
William was desperate to ensure that his wife did not find out about his illegitimate daughter or his successful career which had been built and was still largely reliant upon the small fortune his wife had inherited from her parents would be lost. When she did find out she reacted exactly as he had feared cutting him off from any further funds.
William was disgusted at his wife’s hypocrisy, so much so that he decided to go public about both their affairs. He then left her and moved in with Mary, taking Anne with him. The scandal however ruined his career and unable to restore his reputation at home he decided to leave for America.
William and his new family settled in Carolina but it wasn’t long before tragedy struck when Mary died of fever. Despite this early setback over the next few years he was able to rebuild his fortune and even purchase a plantation.
While William had been busy establishing himself in the New World, Anne had been largely neglected and allowed to roam free and having been raised as a boy she was prone to behave like one. She dressed in male clothes, swore as well as any man, was very physical and every bit the tomboy yet even so with her long red hair and intensely green eyes people were struck by how pretty she was. But she also had a violent temper and aged thirteen stabbed and seriously wounded a servant girl in a fight.
Already frequenting the local taverns two years later she married without permission a heavy-drinking sailor named James Bonny. Her father was furious believing that Bonny was simply a man on the make trying to get his grubby hands on his fortune. As a result, he immediately disinherited Anne who in a rage then tried to set fire to the family home.
In 1718, Anne and James moved to New Providence Island in the Bahamas a place where mostly English pirates could come and go without fear of molestation. Here, Anne was in her element and she was rarely out of the dockside taverns and it was in one of these that she met John “Calico Jack” Rackham, a notorious pirate and iht wasn’t long before she became his mistress.
Her husband John, furious but disinclined to confront Rackham instead demanded of the Island’s Governor, Woodes Rogers that he publicly flog Anne as punishment for her adultery, and then order that she return to him. Rogers hesitated to impose such a severe punishment but Bonny used his request to threaten Anne before offering to divorce her for money. If she agreed then she would be spared the pain and humiliation of a public flogging. Anne however, would not be intimidated. She told Rackham, who wanted to confront Bonny but was dissuaded from doing so by Anne who suggested they flee instead.
Having recently recruited a new crew, late that night Rackham boarded and stole a ship – The Revenge.
It was not uncommon for pirate ships to have women on board when moored in port if only to satisfy the needs of the men but it was considered bad luck to do so when at sea. Rackham broke with this convention by including Anne as a working member of the crew.
Unknown to him he already had a woman among his crew, Mary Read who with hair cut short and clothes loose passed as a boy if a somewhat slight and feminine one.
Anne took a fancy to the pretty young Mary and was seen so often in her company that Rackham became jealous. He confronted Anne about their relationship and when the argument threatened to get violent, Mary felt obliged to reveal her true identity which caused a great deal of embarrassment and no little mirth. 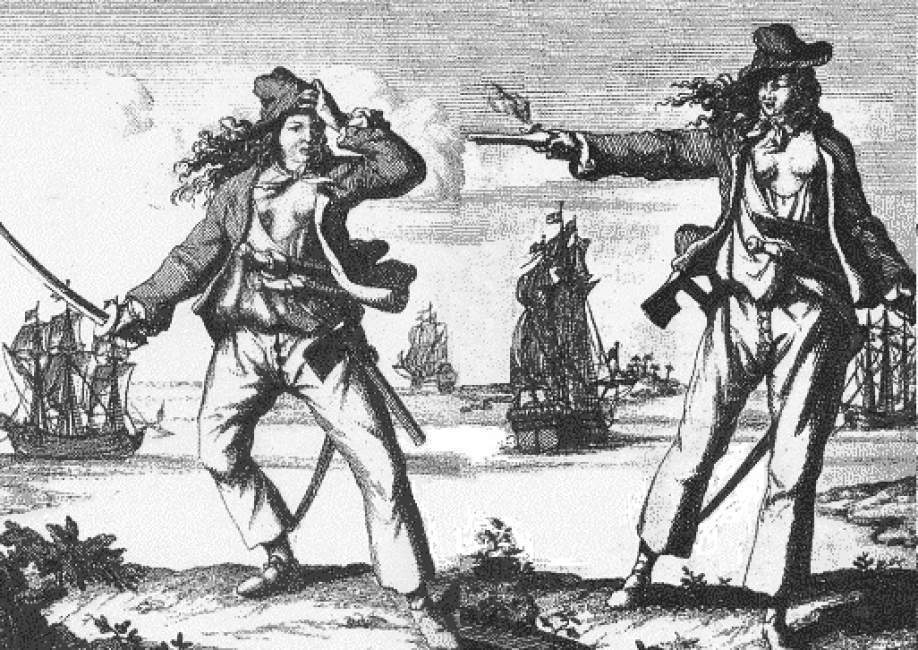 Anne and Mary shirked no chores on ship and expected no special treatment. They did the same work and fought the same battles as the men. They could drink and blaspheme with the best of them and the respect they received as equals was earned.
The Revenge soon became the Terror of the Caribbean with Rackham so brutal that those ships he encountered readily handed over their cargoes. In no time at all the Revenge was laden down with treasure. Their success only served to alert the Authorities, however.
Late at night on 24 October 1720, the Revenge was attacked by a sloop that had been commissioned as a “King’s Ship.” Its Captain, Jonathan Barnet, had been tracking the Revenge and now finding it he timed his attack to perfection.
Rackham and his crew had been celebrating all night and many of them were drunk. When they realised they were under attack they locked themselves in the hold leaving just Anne, Mary, and one man to defend the ship. As Barnet’s men began to board Anne rushed to the hold and berated the men to come out and help them. When they refused she accused them all, including Rackham, of being cowards and fired a shot into the hold.
Though both Anne and Mary fought valiantly they were soon overpowered.
The Revenge, with its crew in irons was taken to Jamaica to stand trial for piracy and murder. Found guilty they were all sentenced to death. Both Anne and Mary were pregnant however and “pleaded their bellies” and so for the sake of the children they carried their sentences were commuted to long terms of imprisonment. “Calico Jack” Rackham however, would hang.
Anne wasn’t exactly sympathetic. Her last words to him were: “If you had fought like a man you would not now be hanged like a dog.”
Mary Read was to die in childbirth but Anne was ransomed by her wealthy father and returned to Charles Town. This was not the first time he had used his wealth to extricate his wayward daughter from one predicament or another, but it was the last.
Back in Charles Town, Anne married a local man, James Burleigh with whom she had ten children. She died in 1782, aged 80, a venerable and much-respected pillar of the local community.
Tagged as: Miscellaneous, Women
Share this post: