Ante Pavelic: The Butcher of the Balkans

Posted on 6th February 2021
Of all ‘Hitler’s Quislings’ none was more brutal than Ante Pavelic, the Croat nationalist whose policy of ethnic cleansing was so extreme that even the Nazi Government in Germany felt obliged to intervene in an effort to moderate his behaviour. During his four years in power more than a million Serbs, Jews, and Gypsies were murdered, some 11% of the entire population while hundreds of thousands more were herded into Concentration Camps or forced to flee. It was with good reason he became known as the – Butcher of the Balkans.
Ante Pavelic was born on 14 July 1889, in the town of Bradina some 30 miles south-west of Sarajevo, where despite himself being an ethnic Croat most of his neighbours were Muslim. Indeed, he claimed to have been greatly influenced by Islamic culture and ideas. 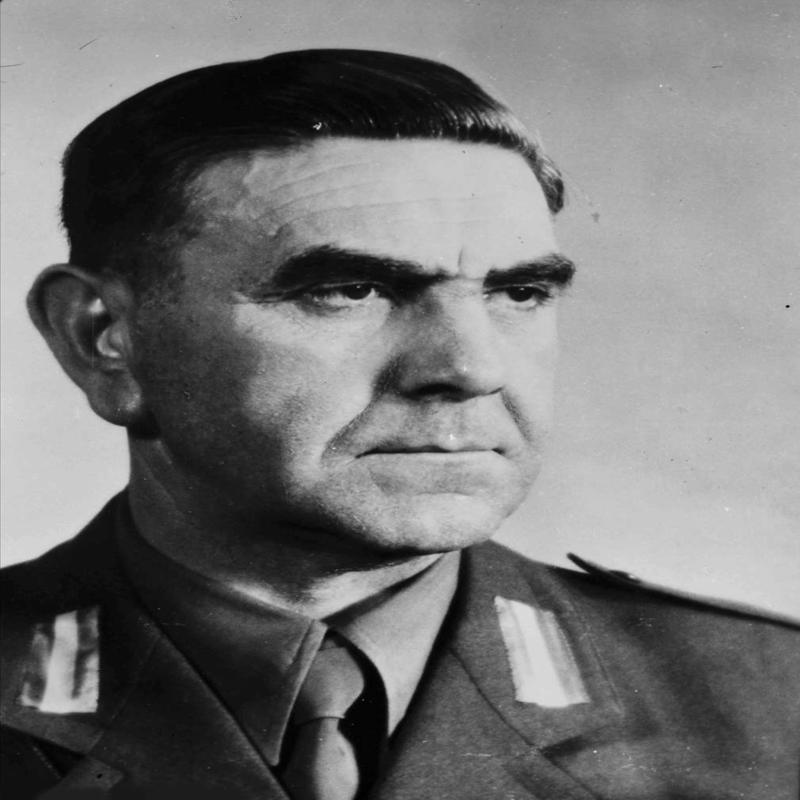 Of all ‘Hitler’s Quislings’ none was more brutal than Ante Pavelic, the Croat nationalist whose policy of ethnic cleansing was so extreme that even the Nazi Government in Germany felt obliged to intervene in an effort to moderate his behaviour. During his four years in power more than a million Serbs, Jews, and Gypsies were murdered, some 11% of the entire population while hundreds of thousands more were herded into Concentration Camps or forced to flee. It was with good reason he became known as the – Butcher of the Balkans.
Ante Pavelic was born on 14 July 1889, in the town of Bradina some 30 miles south-west of Sarajevo, where despite himself being an ethnic Croat most of his neighbours were Muslim. Indeed, he claimed to have been greatly influenced by Islamic culture and ideas.
Educated in the Jesuit Seminary at Senj, in 1905 he travelled to Zagreb to read law but health problems frequently interrupted his studies, the same ill-health that would prevent his participation in World War One.
Whilst in Zagreb he joined the Hrvatzka Stranka Prava, or Croat Party of Rights, a political entity at the extreme right of the political spectrum which advocated Croat separatism at a time when Croatia, like much of the Balkans, formed part of the Austro-Hungarian Empire where following the end of the First World War and its subsequent disintegration a new political formula had to be found.
Much to the ire of the Croat Nationalists on 1 December 1919, the territories of Slovenia, Montenegro, Bosnia-Herzegovina, parts of Macedonia, and Croatia were merged with Serbia to form the South Slav State of Yugoslavia. The most powerful element in this new Yugoslav State was to be Serbia, however – it had a Serb King, Aleksander Karadjordjevic, a Serb dominated parliament, and Serbs held most of the important government posts.
From the outset Pavelic was opposed to the new regime, he sought an independent Croatia, nothing else would do, and certainly not being governed by an ethnic grouping he considered inferior to his own.
In 1927, he was elected to Zagreb City Council and later in the same year to the National Assembly in Belgrade where he often spoke in favour of greater autonomy for Croatia but found the Serb dominated Government unwilling to consider any relaxation of its grip on power. In February 1929, he travelled to Italy where he was introduced to prominent figures within the Vatican and had a personal meeting with Benito Mussolini. He was greatly impressed with the Italian Dictator and when it was suggested by Mussolini that he should form his own fascist party in Croatia with his tacit support he did not hesitate.
Upon his return, and modelling it on the Italian Blackshirts, he transformed the Croatian Youth Movement he had already founded into the paramilitary Ustase, or Insurrection. The time for talking had come to an end, action was required.
On 14 October 1934, King Aleksander was assassinated in Marseilles whilst on a State visit to France by an Ustase agent. Pavelic was immediately suspected of involvement, and he had indeed bribed an official in the French Police to relax the security around the King, a warrant was issued for his arrest. He was in Italy at the time and though briefly detained the Authorities refused to extradite him and he was later released.
With war looming and faced by ethnic tensions at home on 26 August 1939, the Yugoslav Government at last yielded and granted limited autonomy to Croatia but it was to prove too little too late.
Despite its attempts to remain neutral during the war the Yugoslavs finally succumbed to German threats and signed the Tripartite Pact on 24 March 1941, aligning itself with the Axis Powers but a great deal of anti-German sentient remained from the previous war so it came as little surprise that supported by riots on the streets of Belgrade and other major towns two days later the Serb dominated Army overthrew the Government. The Germans who had already drawn up plans for an invasion of Yugoslavia now implemented them.
On 6 April the Luftwaffe bombed Belgrade killing 12,000 civilians, that same day German, Italian, and Hungarian forces invaded the country. The Yugoslav Army ill-prepared, ill-equipped, and forced to fight on three fronts were soon in disarray and Ante Pavelic was quick to exploit the chaos. In an address broadcast on Italian Radio he called upon those Croat soldiers in the Yugoslav Army to mutiny: “You must support your German and Italian allies – turn your guns not against the invaders but those Serbian soldiers and your Serbian Officers.”
On 10 April, German troops occupied Belgrade and no sooner had they done so than in his absence Pavelic’s deputy Slavko Kvaternic declared Croatian independence. Henceforth, Croatia was to be the Sovereign State of Nezavisna Drzava Huratska and on 15 April, Ante Pavelic arrived to take control, the following day the Yugoslav Army surrendered.
It was not Pavelic’s decision as to who would govern the nominally independent Croatia however, that would be determined by Adolf Hitler in Germany and he was not the Fuhrer’s first choice. It was only Mussolini’s intercession on his behalf that saw him appointed Poglovnik, or leader. 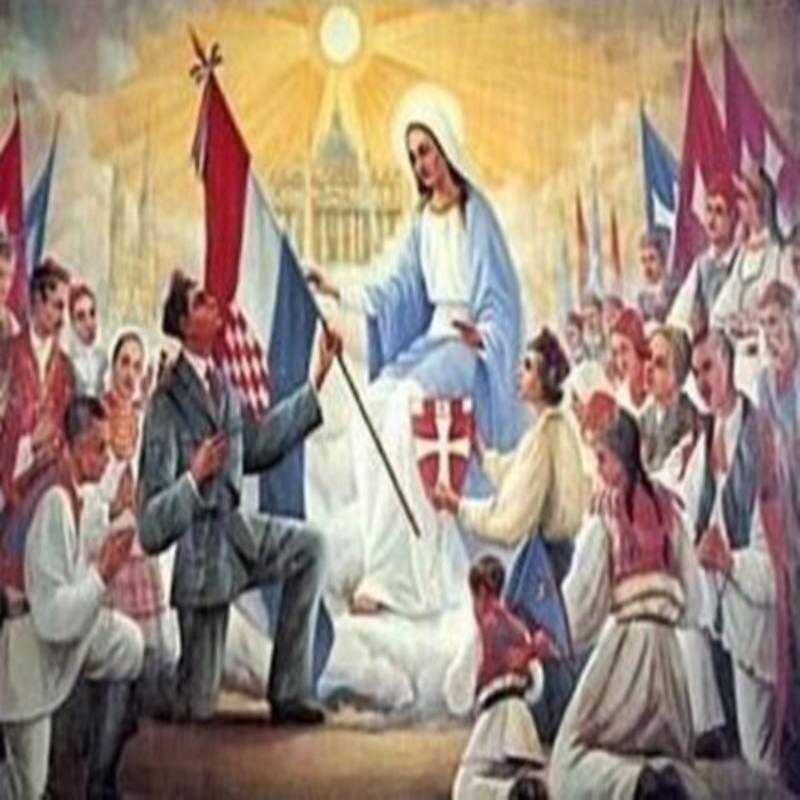 From the beginning Pavelic’s priority was his programme of national purification, to make Croatia fascist, Catholic, and ethnically homogenous, and for this he required little encouragement from the Nazis. All alien elements within the Sovereign Territory of Croatia were to be eradicated. This meant primarily Serbs and Jews but also Gypsies, opponents of the regime, and undesirables. This process of ethnic cleansing would be the responsibility of the Ustase and they embarked upon it keen to live up to their motto – kill a third, convert a third, expel a third - which did not necessarily apply to ethnic Serbs for whom they said they had both a bullet and a grave.
Both Serbs and Jews were forced to wear distinguishing arm bands while Gypsies were simply killed where they were found.
Those designated ‘undesirables’ were rounded up often with the cooperation of the Catholic Church with priests not only preaching sermons in support of the National Purification Programme but often indicating to the Ustase where the undesirables resided or might be hiding and in what can only be described as a killing spree in the first few months alone tens of thousands of people were murdered often in the most brutal way bayoneted or bludgeoned to death. Indeed, there were times when the new Croatia resembled an abattoir, so much so that the German Commander in Croatia Edmund Glaise von Horstenau reported to Berlin that the Ustase had gone raving mad. He went on to submit a written report of one particular incident:
"At Crkveni Bok, an unfortunate place, over which about five hundred 15- to 20-year-old thugs descended under the leadership of an Ustasha lieutenant colonel, people were killed everywhere, women were raped and then tortured to death, children were killed. I saw in the Sava River the corpse of a young woman with her eyes dug out and a stake driven into her sexual parts. This woman was at most twenty years old when she fell into the hands of these monsters. All around, pigs devoured unburied human beings. "Fortunate” residents were shipped in terrifying freight cars; many of these involuntary "passengers" cut their veins during transport to the camp at Jasenovac."
The Germans in Croatia were shocked were shocked at the scale of the butchery and the speed at which it was implement. They felt it was an enthusiasm for killing that bordered on the uncivilised. When Pavelic sought official recognition from the Vatican for his new Catholic State it was denied.
At the Jasenovac Camp alone, more than 80,000 are prisoners were beaten, starved, and worked to death and there were other camps springing up around the country with similar killing ratios as Serb populated towns villages were descended upon and their residents herded together for ‘evacuation.’ 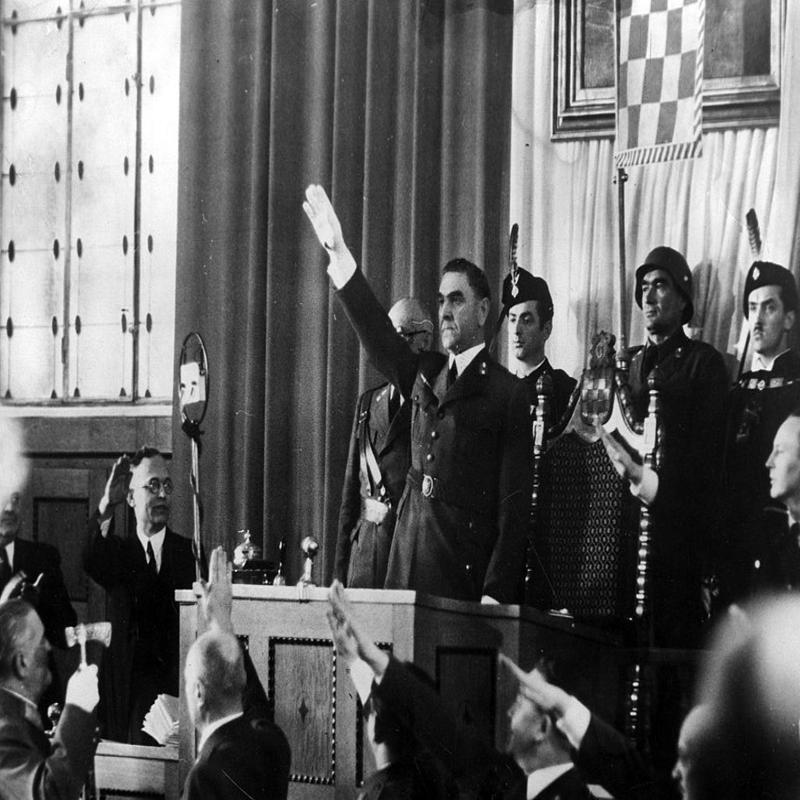 could otherwise be avoided the German Government suggested to Pavelic that he curb their activities and slow the progress of his National Purification Programme. The resistance they feared had already materialised however, in the form of the Chetniks under the command of the Royalist General Dragoljub Mihailovic and the Communist Partisans led by Josip Broz Tito.
A greater fear of communism than fascism was to see the Chetniks begin to collaborate with more than resist the Ustase but even so the opposition to N.D.H rule was to prove so effective that Pavelic was never fully in control of the country. As a result, he was forced to impose a scorched earth policy on his own land and thousands of Croat farms were destroyed and their livestock slaughtered in an attempt to starve the Communists into submission, but even with the support of tens of thousands of German and Italian troops he was unable to crush the resistance of Tito, a fellow Croat.
Under pressure from the Germans who wanted those in the camps to be made available for forced labour in Germany he tried to curb the behaviour of the Ustase but struggled to do so and it was only as the number of potential victims diminished and the fight against the Communists intensified that the killings decreased.
As the war on the Eastern Front turned against the Germans Pavelic became increasingly marginalised and the rapid advance of the Red Army saw him flee Belgrade on 15 April, 1945.
Seeking refuge once more in Rome he was provided with protection by his contacts in the Vatican and despite his whereabouts being known to the Allies no attempt was made to apprehend him. He was to remain in Italy until 1948 when provided with a false passport by the Catholic Ratline for refugee Nazis he was smuggled out of the country to Argentine where he settled in Buenos Aires. There working as a security adviser for the Government of Juan Peron it seemed that he had escaped justice but in 1957 he was seriously wounded in an assassination attempt by agents of the Yugoslav Government.
Fearing for his life he now fled to Franco’s Spain where in hiding on 28 December 1958, the Butcher of the Balkans died of complications resulting from his wounds.
Tagged as: Modern
Share this post: