Posted on 15th February 2021
Slavery is by no means a phenomenon from a dark and distant past, the trade in people as a commodity has been a well-established and lucrative business since the dawn of time and for the entirety of human history.
Historians have tended to focus on just one aspect of the slave trade – the abduction of men, women, and children from the African Continent for transportation to the plantations of the Caribbean and the Southern United States and that the trade in black slaves was undertaken on an industrial scale and is well documented. This however is the story of the Barbary Pirates, and the trade in white slaves. 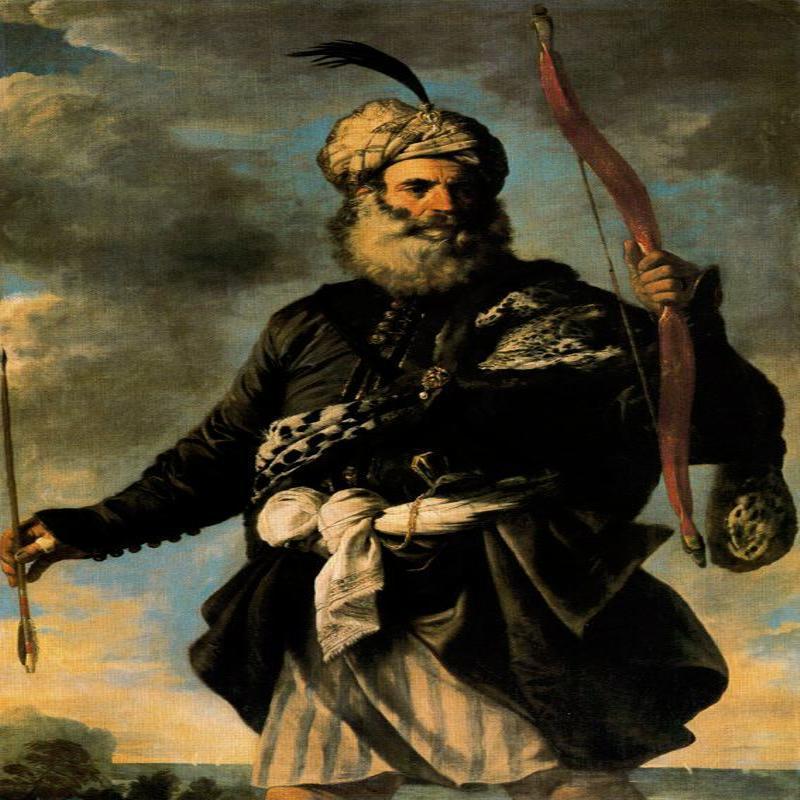 The Barbary Pirates, also known as Corsairs, operated from the coastal ports of North Africa and though nominally privateers subject to Ottoman control they for the most part worked independent of any outside interference. They reached their zenith during the seventeenth and eighteenth century, for example between 1609 and 1616 alone some 466 ships sailing from British ports were known to have been captured by Barbary Pirates often intercepted soon after leaving port and while still within sight of land; and it wasn’t just mariners who were in danger of abduction but all those who lived in remote coastal regions.
The Corsairs modus operandi was to land on a deserted beach before swiftly descending on an isolated village in the dead of night while it slept. Specific dwellings would be targeted and the unsuspecting villagers would be swiftly bound and spirited away before any alarm could be raised. Those who remained would be unaware that an incident had even occurred until the following day. For example, in 1631 the entire village of Baltimore in Ireland was taken and sold into slavery only two of whom ever saw their homeland again.
Such was the scale of attacks on Southern Europe that many of its coastal regions became effectively depopulated as people moved further inshore for safety but for those unfortunate enough not to have fled in time their lives were similar to that of all condemned to a life of forced servitude. They would be herded into the slave markets of Algiers and other towns where they were inspected like livestock and forced to perform for prospective buyers. Once a purchase had been made they would be branded with their owners name or mark and put to work. 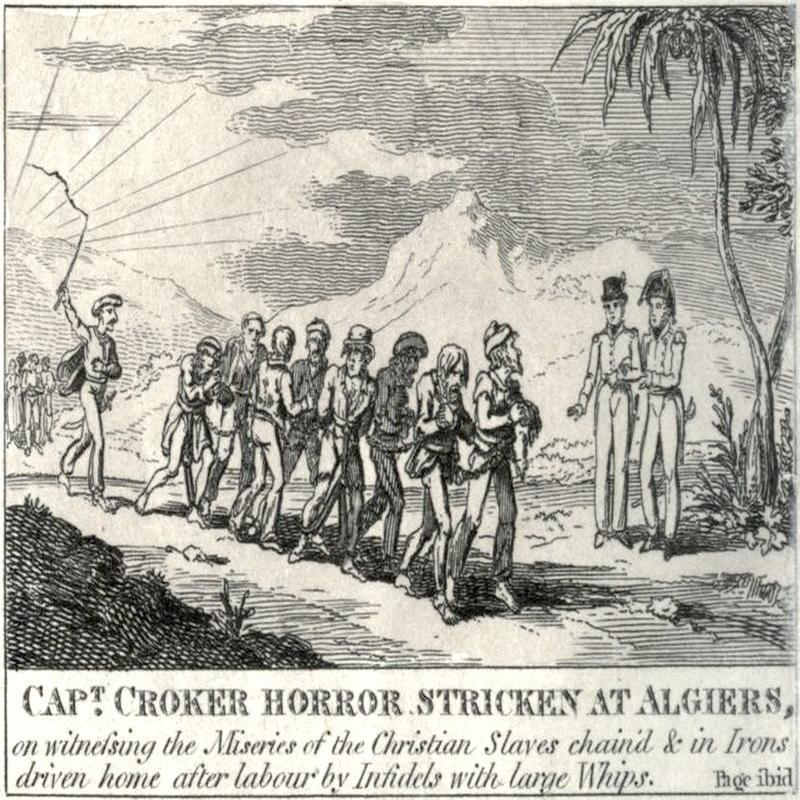 Before departure all slaves would be paraded before the local Pasha who retained the right to buy any slave who caught his eye at their original purchase price, the men to man his galleys, the women to serve in his harem. Some would become the trusted confidante of their master but most would be subject to a life of brutal coercion; condemned to back-breaking toil in the mines, in agriculture, and construction or to endless hours of domestic service where abuse and beatings were commonplace.
Those slaves assigned to the galleys were particularly brutally treated, where chained below decks they were fed on loaves of tasteless black bread and foul water; not permitted on deck unless sick they rarely saw daylight and eating, sleeping, urinating, and defecating where they sat they could quite literally be chained to their oars for years.
Other slaves would be housed in overcrowded prisons known as Bagnios, or Baths, which contrary to their name were often filthy and disease ridden. Over the years the captives themselves were to improve the conditions within the Bagnios surreptitiously creating their own places of worship even in some cases being permitted to exchange money and trade goods within the confines of their incarceration. But a slave had no human worth and was only ever as valuable as the market allowed and so those too old or crippled to be of any further use were often freed to wander the streets as beggars or try to make their own way home if they could.
Slaves were not just taken for labour but also for ransom and so if you came from a wealthy background there remained the possibility of obtaining one’s freedom but for most, barring escape, from the moment of their capture their fates were sealed. Unless, of course they embraced the Muslim world without equivocation in which case there was the possibility of earning your freedom and for those who converted to Islam voluntarily considerable advancement. Indeed, many of the most notorious Barbary Corsairs were not Arabs at all but European by birth. For though they struck fear into the heart of most for some their activities provided an opportunity.
The Englishman Jack Ward, who had been denied a commission as a privateer by Queen Elizabeth I would be one such man and drinking late into the night at a tavern in Plymouth with some of his shipmates he would explain why:
“So mates what is to be done? Here’s a scurvy world and scurvily we live in it, we feed here upon the water and the King’s salt beef without a pence to buy a bushel of grain when we come ashore. So sup and be merry everyone at the proper charge of his purse. This night when the Captain and the Officers shall conjecture nothing but we are drawing dry the pot, we’ll be diving deep into the fugitive’s bags.”
Under the leadership of Ward the men later left the tavern and stole a ship where sailing to Algiers he offered his services to the Ottomans becoming one of the wealthiest slave traders in the whole of North Africa. Another was the Dutchman Jan Janszoon, who renamed as as Murat Reis even sailed as far north as Iceland where he carried off more than 400 prisoners.
The response to the activities of the Barbary Pirates varied with much of Southern Europe creating mechanisms whereby slaves could be purchased back, sometimes these would be State subsidised but mostly they were organised by the Catholic Church which encouraged the wealthy to make provision in their Wills for the release of those in bondage, and most Churches had a locked collection box solely for the release of the poor benighted slave whose only offence was to believe in Jesus Christ as their Savour.
Once the money had been raised negotiations for the release of captives usually carried out by Monks from the Trinitarian and Mercidarian Order would begin and in this way thousands of French, Italian, and Portuguese slaves were successfully ransomed.
Those taken from the ships and countries of Protestant Northern Europe fared less well however with no coordinated effort made to raise money for their release, though some individual clergy and charitable organisations did what they could. In England for example, the ‘Algerian Fund,’ or money raised from customs duties supposedly put aside for reasons of ransom was invariably plundered for other purposes.
Part of the reason for this was that the Protestant States always adopted a more aggressive approach to the Barbary Pirates. For example, raids on England virtually ceased during the reign of Charles II after he ordered the Royal Navy to seek out and take on the Pirates and a large number of their galleys were sunk. Other European powers such as France, Sweden, and the Netherlands also regularly bombarded the Barbary ports in particular Algiers which was attacked in 1682, 1683, and 1688. Such aggression would invariably lead to a temporary cessation in pirate activity, but it would only ever be temporary. 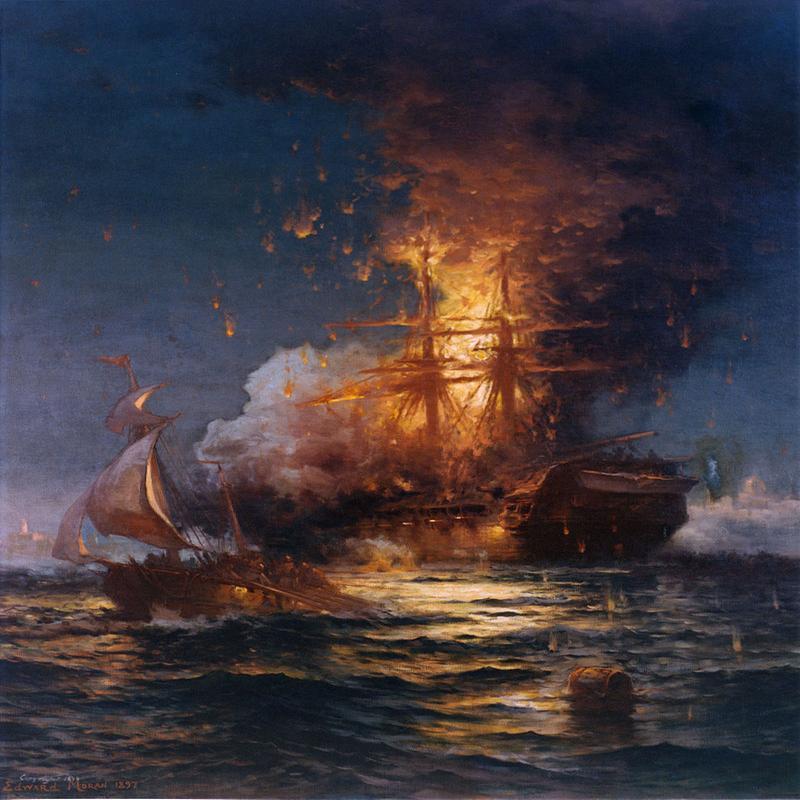 The recently formed United States of America with no navy of its own was particularly bedevilled by the activities of the Barbary Corsairs and unable as they were to protect either their merchant marine or patrol the sea lanes they used they were easy prey and forced to agree unfavourable trade concessions, sign treaties that were always more honoured in the breach, or pay protection money.
In March 1786, two future Presidents of the United States John Adams and Thomas Jefferson travelled to London to negotiate an end to the attacks on American ships with the Barbary States envoy Sidi Haj Abdulrahman. When they asked him why they attacked innocent countries that had done them no harm Abdulrahman replied:
“It is written in the Koran, that all nations who have not acknowledged the Prophet Mohammed are sinners, whom it is the right and the duty of the faithful to plunder and enslave and every Muslim who is slain in this warfare will go to paradise.”
He then went on to demand tribute, only tribute would prevent further attacks, only ransom would facilitate the release of their captives. It was a humiliation for the fledgling nation but with no navy of their own, and against Jefferson’s advice, the treasure demanded was duly paid but America’s impotence in the face of aggression would signify a change of policy that not only hastened the building of a navy and the formation of the Marine Corps but under the by now President Thomas Jefferson would see the United States first foreign intervention when in May 1801 he declared war against the Barbary States.
Even so, it often appeared as if they acted with impunity despite the fact that the Dutch, Swedish, British, French and American Fleets all at some time or other bombarded the North African ports and it has been estimated that some 1,250,000 white Europeans mostly from the region of the southern Mediterranean were enslaved during the two hundred years or so the Barbary Pirates operated. This was slavery on a scale with that in black slaves from Africa (where again it was the Arab who procured the slaves for European buyers) and no less lucrative. In fact, Corsair activity only waned in tandem with the declining power of the Ottoman Empire itself and the abolition of slavery on the European and North American Continents.
Tagged as: Miscellaneous
Share this post: