Posted on 14th September 2021
James Ewell Brown ‘Jeb’ Stuart was, along with Nathan Bedford Forrest, the most renowned Cavalry Commander of the American Civil War. A man known for his audacity and courage he was also flamboyant and with his long flowing beard, red-lined grey cape and slouch hat with ostrich feather someone who liked to be noticed.
He cut a dash alright but there was nothing superficial about his reputation as a formidable Cavalry Officer. It had been built on solid foundations in the campaigns in the Shenandoah Valley, in Maryland, and in the Battles of the Peninsula. He was a man to be feared. 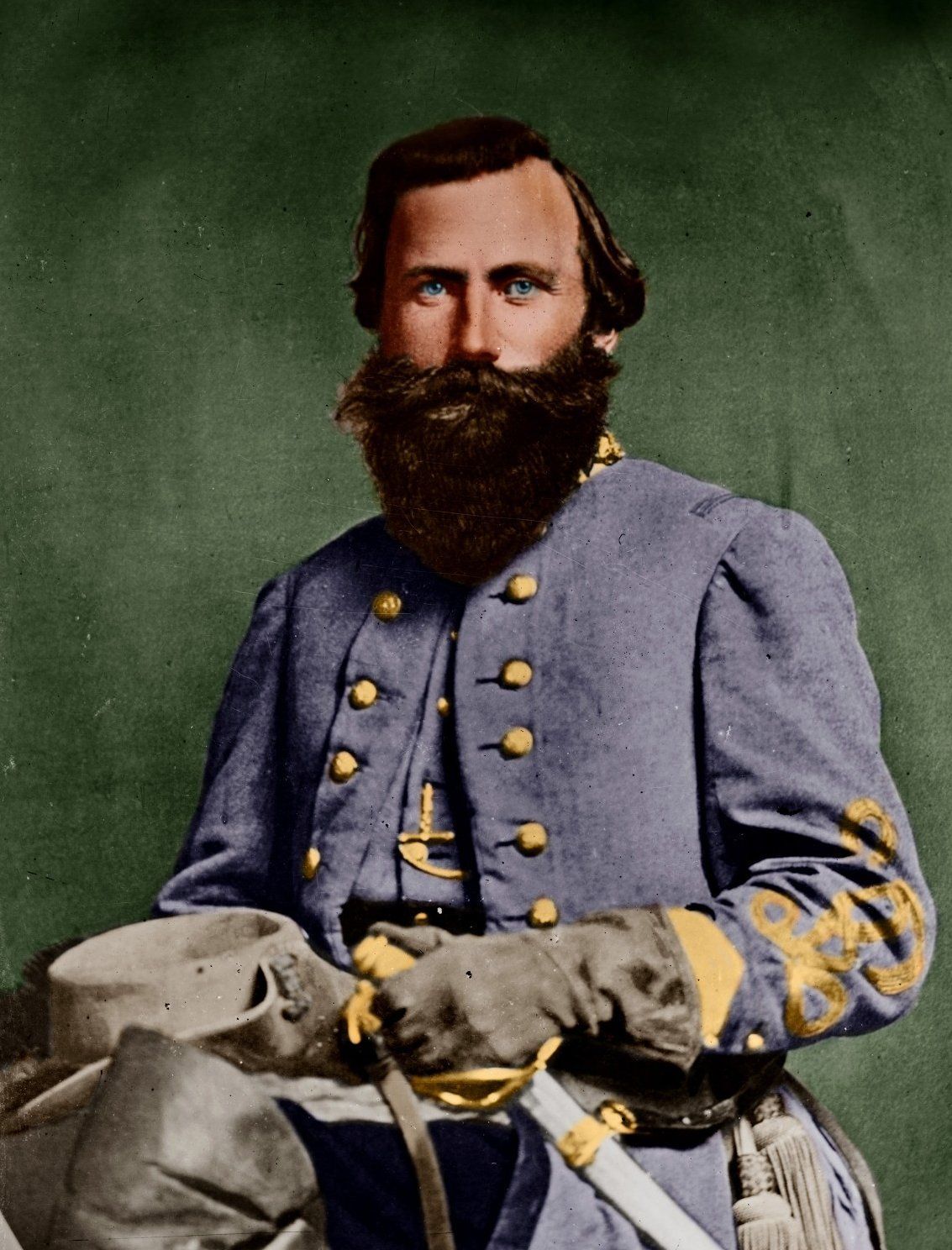 As the eyes and ears of General Robert E Lee's all conquering Army of North Virginia he was responsible for intelligence gathering and accruing knowledge of enemy dispositions and had been an integral part of the Army's unparalleled success against superior odds. It seemed to his opponents in the Army of the Potomac that he was invincible but all this was to change at Brandy Station, Virginia, on 9 June, 1863.
Following General Lee's crushing victory at the Battle of Chancellorsville in May, his army had been foraging for food and provisions in preparation for his planned invasion of the North.
It was a campaign intended to relieve the pressure on General John C Pemberton's forces besieged at Vicksburg on the Mississippi and Stuart's role would as usual be to gather intelligence, harass the enemy and screen Lee's army from attack.
But with the Union Army still licking its wounds following Chancellorsville there was little fighting to be done so Stuart requested a full-review of his troops. He believed that his men deserved some recognition and it would certainly do little harm to his reputation as the dashing cavalier. 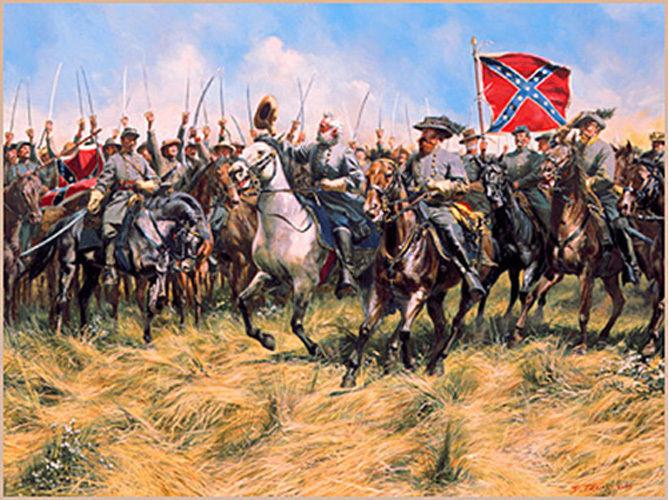 The Review was granted and taking place on 5 June it was a grand and impressive spectacle which included a full battle simulation. Alas, General Lee had not been there to witness it and as a result Stuart insisted that it be done again. Lee yielded to his demand and three days later on 8 June there was a repeat performance but this time it would just be a simple march pass with battle flags flying and salutes taken but even so many Officers and those among the rank-and-file thought that perhaps the mercurial Stuart was getting a little above himself - that he was perhaps taking his eye off the ball.
The events of the following day were to confirm many of them in their view.
Exhausted from their parade ground antics Stuart was ordered to bivouac his men at Brandy Station, a quiet backwater not expected to be a place of conflict. Unknown to Stuart, however, his presence in and around Brandy Station had come to the attention of the Union Commander "Fighting" Joe Hooker, who just a month earlier had lost his nerve at Chancellorsville with almost catastrophic results for the Union cause. 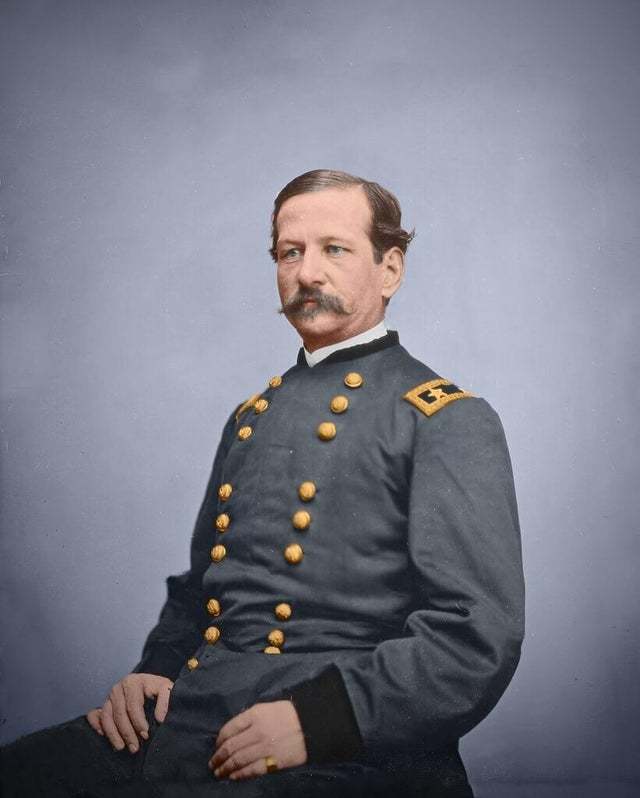 Fearing yet another one of Stuart's increasingly demoralising attacks upon his supply lines he ordered the Union Cavalry under General Alfred E Pleasonton to disperse them, if he could. It was an order given more out of hope than expectation as up to this point the Union Cavalry had been seen as little more than a joke. They had been defeated and humiliated so many times by Stuart and other Confederate Cavalry Commanders such as John Hunt Morgan, John Stapleton Mosby, and Nathan Bedford Forrest that both sides believed they were simply invincible.
Jeb Stuart's force numbered around 9,500 men split into five Brigades commanded by Wade Hampton, William Jones, Beverly Robertson, and Robert E Lee's son, Rooney. The final Brigade was normally led by Lee's other son, Fitzhugh, but he had been struck down with rheumatism and his command had had been given to Thomas T Munford.
General Pleasonton had more than 11,000 men at his disposal including artillery and a Brigade of infantry and they were split between Brigadier-Generals John Buford and David McMurtrie Gregg.
At 04.30 in a dense fog, unusual for that time of year, Buford moved his troopers across the Rappahannock River easily avoiding the Confederate pickets and attacked the encampment of William Jones who was taken completely by surprise. In the confusion that ensued many of his men, only partially dressed, mounted their horses and went straight into the counter-attack which only made the confusion worse. 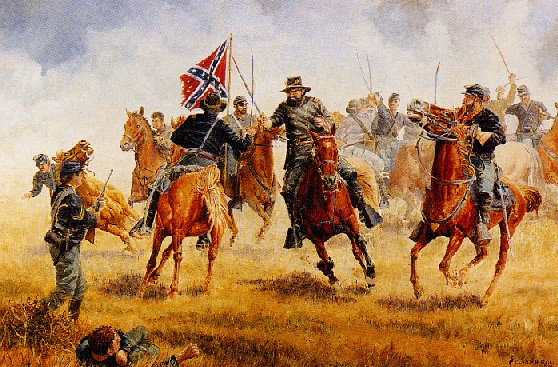 Cavalrymen in battle would often dismount and fight as infantry but there had been no time to organise any kind of defence and men simply charged one another with sabres drawn firing their pistols as they rode.
Jones barely prevented Benjamin F Davis's 6th Pennsylvanian from capturing Stuart's six batteries of artillery some of which were hastily withdrawn others employed in the defence. Despite Davis being killed in the fighting the attack continued to be bravely pressed home by Major Robert Morris until finally, after a great many casualties they were forced to withdraw.
Buford, despite having the element of surprise on his side, had been unable to dislodge the Confederates when they suddenly and unexpectedly withdrew. General Gregg's Brigade men now arrived on the field and to everyone’s astonishment the invincible Jeb Stuart was humbugged for the second time. 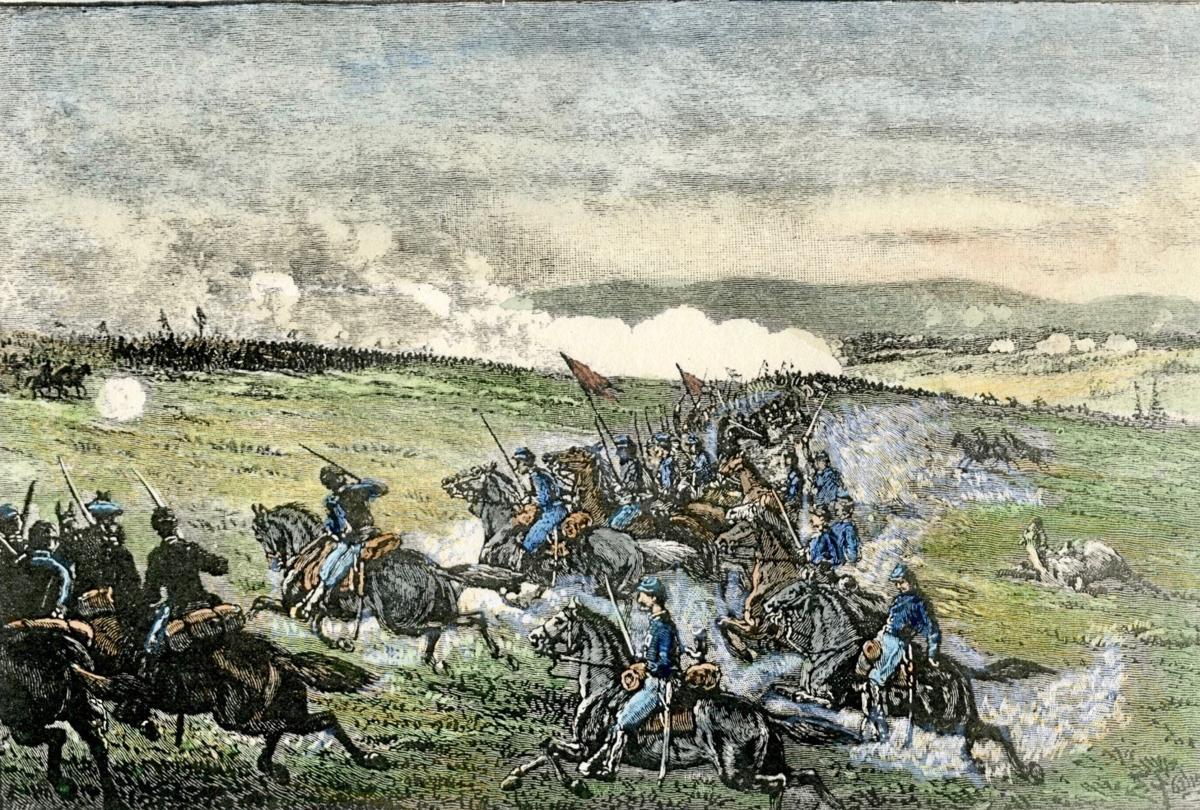 Gregg attacked from the East up what was known as Fleetwood Hill and quickly had Stuart surrounded and he appeared to be on the verge of a catastrophic defeat. A fierce counter-attack by Rooney Lee's Brigade stalled Gregg's advance but even so the situation remained perilous while Lee had been seriously wounded and helped from the field.
The situation remained desperate when Pleasonton, seeing Gregg's stalled advance as a setback and lacking the confidence to press home his advantage decided to withdraw his troops back across the Rappahannock.
After ten hours of intense fighting, much of it on horseback and hand-to-hand, the Battle of Brandy Station was over. The Union Cavalry had suffered 907 casualties, the Confederates 523.
The Battle of Brandy Station was the largest single cavalry engagement of the war and Stuart was to declare it a comprehensive Confederate victory. After all, he had held the field, inflicted twice as many casualties, and the Union Cavalry had failed to discover General Lee's Army encamped just a few miles away at Culpepper. In all of these assertions he was correct but events were not perceived that way.
The simple fact was he had been taken completely unawares, not once but twice, and in allowing his force to be surrounded and coming within a hairsbreadth of destruction made his boasts of victory seem not just hollow but almost deluded.
He was heavily criticised in the Southern press and there were murmurings within the army that his ego was out of control and that this was affecting his competence. Some among his fellow Officers said they had long seen it coming.
His further failings in the coming months, particularly at the Battle of Gettysburg, just seemed to emphasise the point but General Lee would hear none of it.
When Jeb Stuart died just under a year later on 12 May, 1864, from wounds inflicted at the Battle of Yellow Tavern, Lee remarked that he could barely keep from weeping at the mention of his name.
Though General Pleasonton was also to be heavily criticised for seemingly withdrawing his troops at the point of victory, the Battle of Brandy Station had shown for the first time that Union Cavalry could compete with their Southern counterparts on the field of battle.
The aura of Southern invincibility in the saddle had been dispelled forever.
Tagged as: Miscellaneous, War
Share this post: