Posted on 13th February 2021
In New Orleans on 7 September, 1892, John L Sullivan defended his World Heavyweight Title against Gentleman Jim Corbett. The legendary Sullivan who had not fought for almost four years was most people’s favourite to win but some with a keener eye thought better, and they were right.
Corbett, who adopted a more scientific approach to the ring, easily avoided Sullivan’s crude attempts to engage him in a brawl handing out a boxing lesson to the aged Champion in the process. In the 21st Round he delivered the coup de grace knocking out the Champion for the first and only time in his career. It had been a long time coming. This is his account of the fight taken from his1926 autobiography, ‘The Roar of the Crowd.’ 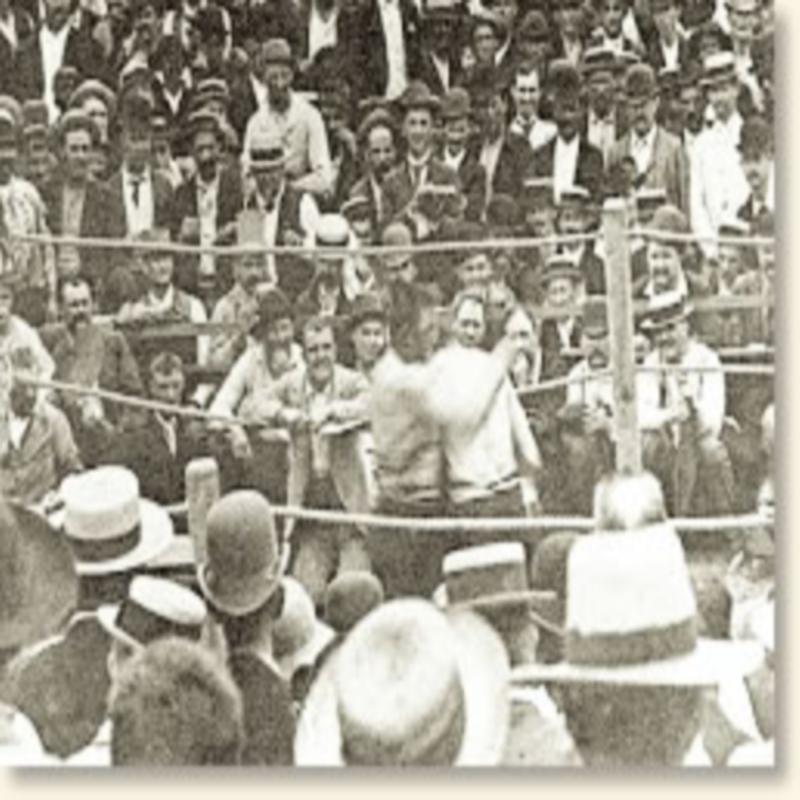 "Now, I knew that the most dangerous thing I could do was to let Sullivan work me into a corner when I was a little tired or dazed, so I made up my mind that I would let him do this while I was still fresh. Then I could find out what he intended doing when he got me there. In a fight, you know, when a man has you where he wants you, he is going to deliver the best goods he has
.
From the beginning of the round Sullivan was aggressive-wanted to eat me up right away. He came straight for me and I backed and backed, finally into a corner. While I was there I observed him setting himself for a right-hand swing, first slapping himself on the thigh with his left hand-sort of a trick to balance himself for a terrific swing with his right. But before he let the blow go, just at the right instant, I sidestepped out of the corner and was back in the middle of the ring again, Sullivan hot after me.
I allowed him to back me into all four corners, and he thought he was engineering all this, that it was his own work that was cornering me. But I had learned what I wanted to know - just where to put my head to escape his blow if he should get me cornered and perhaps dazed. He had shown his hand to me.
In the second round he was still backing me around the ring. I hadn't even struck at him yet, and the audience on my right hissed me for running away and began to call me 'Sprinter.' Now I could see at a glance that Sullivan was not quite near enough to hit me, so suddenly I turned my side to him, waved both hands to the audience and called out, 'Wait a while! You'll see a fight.'
So far Sullivan hadn't reached me with anything but glancing blows, and it was my intention, when the third round started, to hit him my first punch, and I felt that it must be a good one! If my first punch didn't hurt him, he was going to lose all respect for my hitting ability.
So, with mind thoroughly made up, I allowed him to back me once more into a corner. But although this time I didn't intend to slip out, by my actions I indicated that I was going to, just as I had before. As we stood there, fiddling, he crowding almost on top of me, I glanced, as I had always done before, first to the left, then to the right, as if looking for some way to get out of this corner. He, following my and thinking I wanted to make a getaway, determined that he wouldn't let me out this time!
For once he failed to slap himself on the thigh with his left hand, but he had his right hand all ready for the swing as he was gradually crawling up on me. Then, just as he finally set himself to let go a vicious right I beat him to it and loosed a left-hand for his face with all the power I had behind it. His head went back and I followed it up with a couple of other punches and slugged him back over the ring and into his corner. When the round was over his nose was broken.
At once there was pandemonium in the audience! All over the house, men stood on their chairs, coats off, swinging them in the air. You could have heard the yells clear to the Mississippi River!
But the uproar only made Sullivan the more determined. He came out of his corner in the fourth like a roaring lion, with an uglier scowl than ever, and bleeding considerably at the nose. I felt sure now that I would beat him, so made up my mind that, though it would take a little longer, I would play safe.
From that time on I started doing things the audience were seeing for the first time, judging from the way they talked about the fight afterwards. I would work a left-hand on the nose, then a hook into the stomach, a hook up on the jaw again, a great variety of blows, in fact; using all the time such quick side-stepping and footwork that the audience seemed to be delighted and a little bewildered, as was also Mr. Sullivan. That is, bewildered, for I don't think he was delighted.
In the twelfth round we clinched, and, with the referee's order, 'Break away,' I dropped my arms, when Sullivan let go a terrific right-hand swing from which I just barely got away; as it was it just grazed the top of my head. Some in the audience began to shout 'foul!' but I smiled and shook my head, to tell them, 'I don't want it that way.'
When we came up for the twenty-first round it looked as if the fight would last ten or fifteen rounds longer. Right away I went up to him, feinted with my left and hit him with a left-hand hook alongside the jaw pretty hard, and I saw his eyes roll. . . . Summoning all the reserve force I had left I let my guns go, right and left, with all the dynamite Nature had given me, and Sullivan stood dazed and rocking. So I set myself for an instant, put just 'a little more' in a right and hit him alongside the jaw. And he fell helpless on the ground, on his stomach, and rolled over on his back! The referee, his seconds and mine picked him up and put him in his corner; and the audience went wild."
Tagged as: Fact File
Share this post: