Posted on 27th December 2020
The Duchess of Richmond’s Ball was one of the most eagerly anticipated events on the social calendar but this year it would be different.
It was June 15, 1815, and since Napoleon Bonaparte’s return to Paris from his enforced exile on the Mediterranean island of Elba almost three months earlier the armies of the Allied Coalition had been gathering the vanguard of which was camped around Brussels near the border with France. Charlotte Lennox, Duchess of Richmond’s husband was responsible for the defence of Brussels in the event of a French attempt to seize the city but she remained determined that the ball should go ahead regardless. She approached the Duke of Wellington, commanding the Allied forces for permission. He told her: “Duchess, you may give your ball without the fear of interruption.” 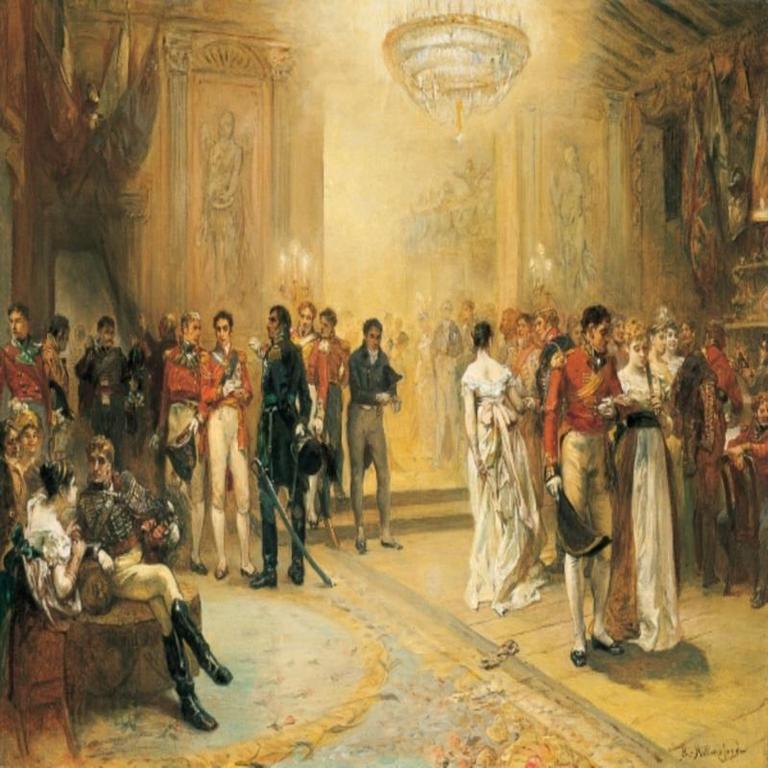 Despite the many foreign dignitaries who would be in attendance with the cream of the British nobility serving in the Duke of Wellington’s army including three of her own sons the guest list would have a familiar feel to it; while the house she and the Duke had rented on the Rue de Blanchiserie, a former coach-makers workshop, livery, and living quarters was more than large enough to accommodate the 238 guests (103 of whom were uniformed officers) along with the corresponding number of servants and musicians.
Always eager to be at the heart of events, as the guests arrived they were escorted to the Coach House which had been converted into a giant ballroom for the night where to the musical accompaniment of a full Orchestra they were formally introduced to the 47 year old Duchess though she was already known to so many.
It was a grand occasion but one not to everyone’s taste. The Reverend George Griffin Stonestreet wrote disapprovingly:
“The severest etiquette is always present. The women upon entering salute one another upon each cheek, they then sit down and remain as stiff as waxworks. They always begin a ball with a perfect froideur (where distance is maintained) before they go on with their dangerous waltz. The English women like to finish with a gallop.”

The women had their dance cards the men their hopes and desires as in the previously bare surroundings of a coach house transformed chandeliers sparkled in the early evening gloom, brightly coloured garlands adorned recently papered walls, ribbons hung from the ceiling, and rose petals littered the floor. With bows and curtsies aplenty in its heavily perfumed environs ladies in silk, taffeta, and lace mingled with robust young men in military uniform anxiously awaiting the invitation to dance. Yet despite the gaiety and champagne aplenty their remained a tension in the air for it was rumoured that Bonaparte was on the move and that the order had already been issued for the army to march in the morning. Those present were reluctant to speak of it.
As the evening wore on it became increasingly humid and the French Doors were thrown open to allow the gentle summer breeze to cool those perspiring from a vigorous waltz or military quick-step.
The Duchess of Richmond’s daughter, Lady Louisa Lennox recalled the scene:
“I well remember the Gordon Highlanders dancing reels at the Ball. My mother thought it would interest the foreigners to see them, which it did. I remember hearing that some of the poor men who danced in our house died in battle. There was quite a crowd to see the Scotch dancers”. 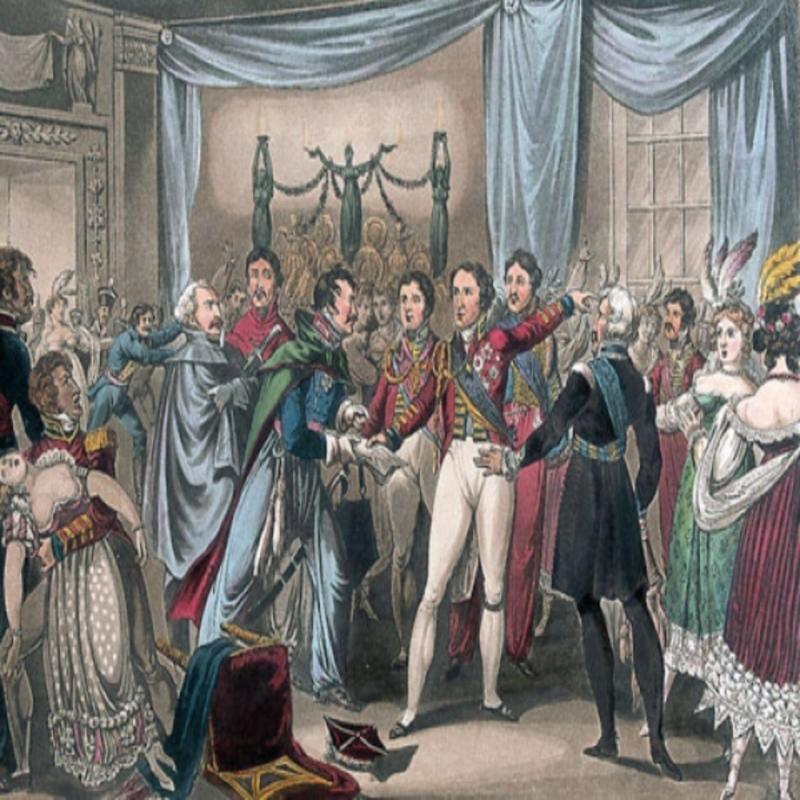 The Duke of Wellington did not arrive until a little before 11 pm, fashionably late some might say, but there was a reason for his tardiness. Even so, accompanied by his aides and a little brusque of manner he remained the epitome of calm. Not long after, around the time supper was due to be served a young Officer Harry Webster arrived somewhat breathless and frantic of appearance. He had,, he said, a letter for the Prince of Orange. The Prince who was enjoying himself took receipt of the letter but not wishing to cause a commotion had declined to read it instead slipping it into his pocket. Wellington having been alerted of Webster’s arrival approached the Prince and retrieved the letter. Upon reading it, though he remained calm, his countenance had changed. 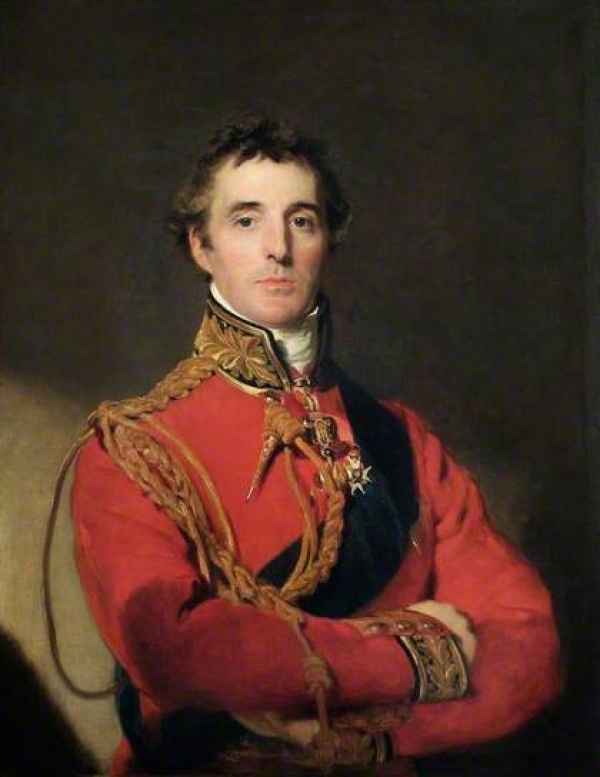 The letter informed him that Bonaparte’s army had broken camp and was on the move. As we have seen this came as little surprise but he had believed that Napoleon would head west to disrupt his supply lines and threaten any route of withdrawal to the coastal ports. Instead, it was now clear he had turned east determined to separate his army from that of the Prussians. There was now no doubt in his mind that the impostor Bonaparte intended to destroy the army of Blucher before turning the full weight of his force on him.
The Duke exuding confidence, for there were many French spies in Brussels, made his excuses and departed to an ante-chamber where perusing a map he remarked to one of his Staff Officers:
“Napoleon has humbugged me, by God”.
His army would make for Quatre Bras but that would not be the decisive battle. He then pointed to a place on the map a small village called Waterloo and declared here we will make our stand.
The music which had temporarily ceased started once more but the dancing was now perfunctory at best as orders were issued and men began to leave. The Duchess pondered whether to curtail proceedings but the Duke insisted they continue. His young Officers should experience the finery and delights of female companionship before war once again became the brutal landscape of their lives. But the frivolity was now an illusion, the peace had been shattered, and the Duke himself after a few words intended to reassure himself departed.
The Duchesses daughter Lady Georgiana de Ros remembered well the prevailing atmosphere:
“It was a dreadful evening, we were taking leave of friends and acquaintances many never to be seen again. The Duke of Brunswick made a speech as to the Brunswickers to be sure to distinguish themselves after the honour done to them by having the Duke accompany them to their review! I remember being quite provoked with poor Lord Hay, a dashing merry youth, full of military ardour, whom I knew very well for his delight at the idea of going into action, and all the honours he was to gain, but the first news that we received on the 16th was that he and the Duke of Brunswick were killed”. 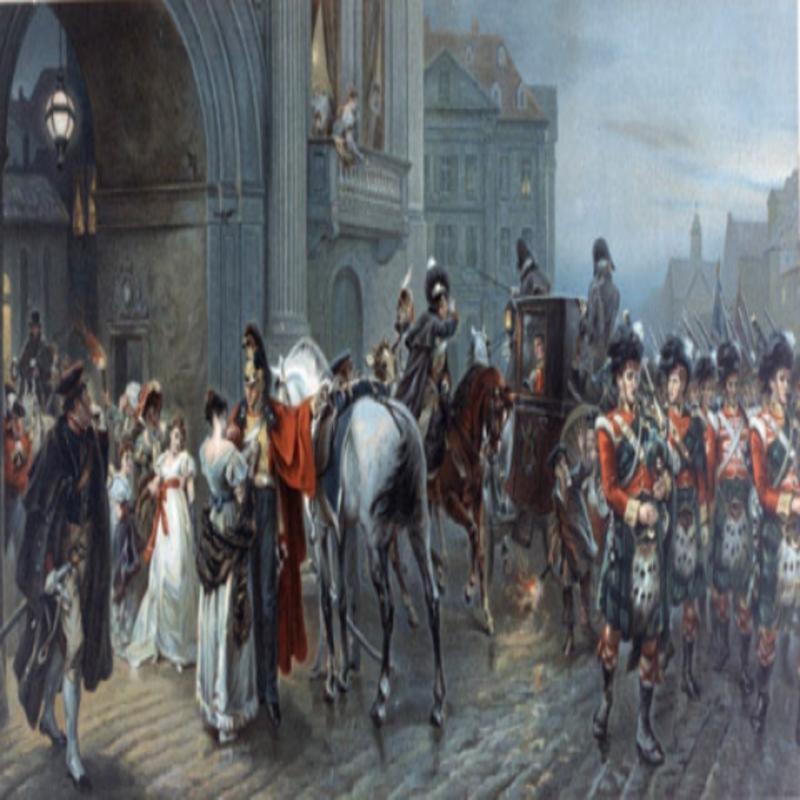 As the orders were given the exodus of military men was very rapid indeed. Those diplomats present likewise departed in great haste as Coaches appeared in the courtyard and soon the clattering of horses hooves on the cobblestoned streets drowned out the music of the orchestra as the “strains of the waltz gave way to the sounds of an army on the move.” The Duchess of Richmond’s youngest daughter recalled how “I suddenly became aware of the great preponderance of women in the room.”
The atmosphere in the Rue de Blanchisserie had changed beyond recognition as Katherine Arden, the daughter of Lord Alvanley who had arrived late to the ball explained:
“On our arrival we were told that the troops had orders to march at three in the morning and that every officer must join his regiment by that time. Those who had brothers and sons to be engaged openly gave way to their grief, as the last of many farewells took place at this terrible ball.”
The Georgian Ball, that highlight of the social calendar made famous in the novels of Jane Austen where the great and the good of thereabouts gathered to meet and talk, make merry and court also had a darker side and for many in attendance the most famous ball of all would prove to their last.
Tagged as: Georgian
Share this post: