Posted on 26th October 2021
By September 1940, it was clear that the Luftwaffe’s attempt to secure air superiority in the skies over Britain in preparation for Operation Sea Lion, Hitler’s plan for invasion, had been thwarted. But the attacks on the country would not cease, rather they would intensify. If the British could not be beaten from the skies then they would be bombed from them instead, massively and relentlessly until the spirit of the people had been broken and their will to resist destroyed - it was the tactics of terror.
The first bombing raid on London occurred on 7 September 1940 and did not cease until 11 May 1941. Including 57 consecutive raids both day and night.
Ernie Pyle was an American war correspondent who would later report from North Africa, Italy and the Pacific Theatre where he would later be killed. In London at the time of the Blitz this is his account of one such raid: 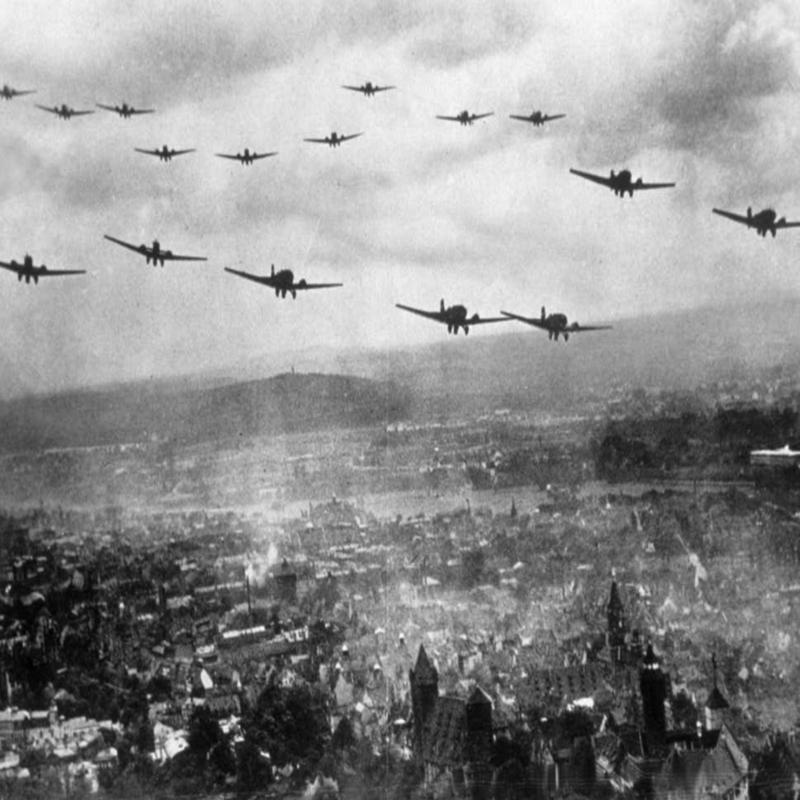 They came just after dark, and somehow you could sense from the quick, bitter firing of the guns that there was to be no monkey business this night.
Shortly after the sirens wailed you could hear the Germans grinding overhead. In my room, with its black curtains drawn across the windows, you could feel the shake from the guns. You could hear the boom, crump, crump, crump, of heavy bombs at their work of tearing buildings apart. They were not too far away.
Half an hour after the firing started I gathered a couple of friends and went to a high, darkened balcony that gave us a view of a third of the entire circle of London. As we stepped out onto the balcony a vast inner excitement came over all of us-an excitement that had neither fear nor horror in it, because it was too full of awe.
You have all seen big fires, but I doubt if you have ever seen the whole horizon of a city lined with great fires - scores of them, perhaps hundreds.
There was something inspiring just in the awful savagery of it.
The closest fires were near enough for us to hear the crackling flames and the yells of firemen. Little fires grew into big ones even as we watched. Big ones died down under the firemen's valor, only to break out again later.
About every two minutes a new wave of planes would be over. The motors seemed to grind rather than roar, and to have an angry pulsation, like a bee buzzing in blind fury. 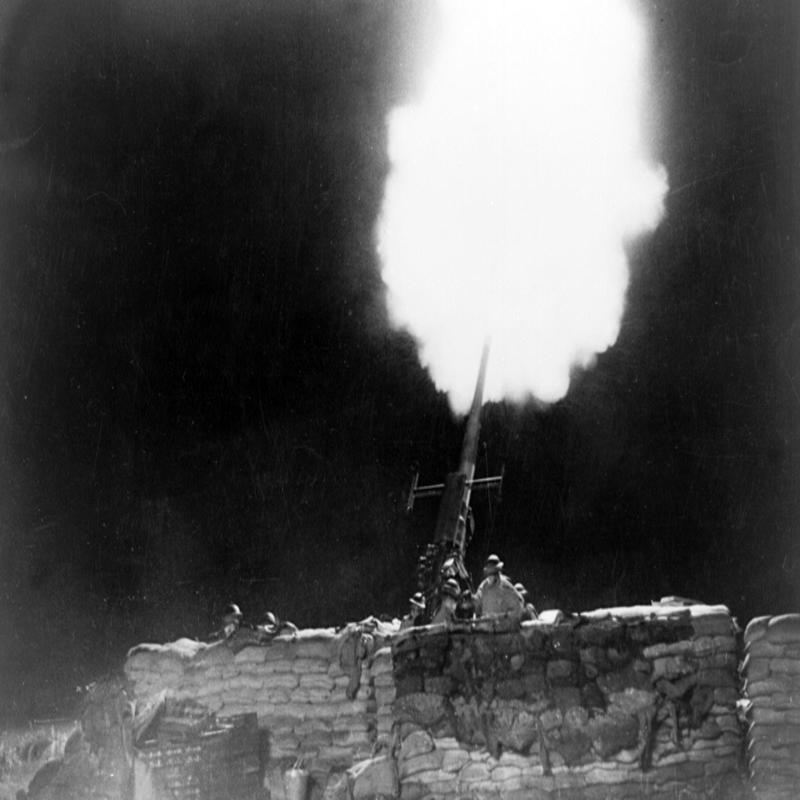 The guns did not make a constant overwhelming din as in those terrible days of September. They were intermittent - sometimes a few seconds apart, sometimes a minute or more. Their sound was sharp, nearby and soft and muffled, far away. They were everywhere over London.
Into the dark shadowed spaces below us, while we watched, whole batches of incendiary bombs fell. We saw two dozen go off in two seconds. They flashed terrifically, then quickly simmered down to pin points of dazzling white, burning ferociously. These white pin points would go out one by one, as the unseen heroes of the moment smothered them with sand. But also, while we watched, other pin points would burn on, and soon a yellow flame would leap up from the white center. They had done their work - another building was on fire.
The greatest of all the fires was directly in front of us. Flames seemed to whip hundreds of feet into the air. Pinkish-white smoke ballooned upward in a great cloud, and out of this cloud there gradually took shape - so faintly at first that we weren't sure we saw correctly - the gigantic dome of St. Paul's Cathedral. 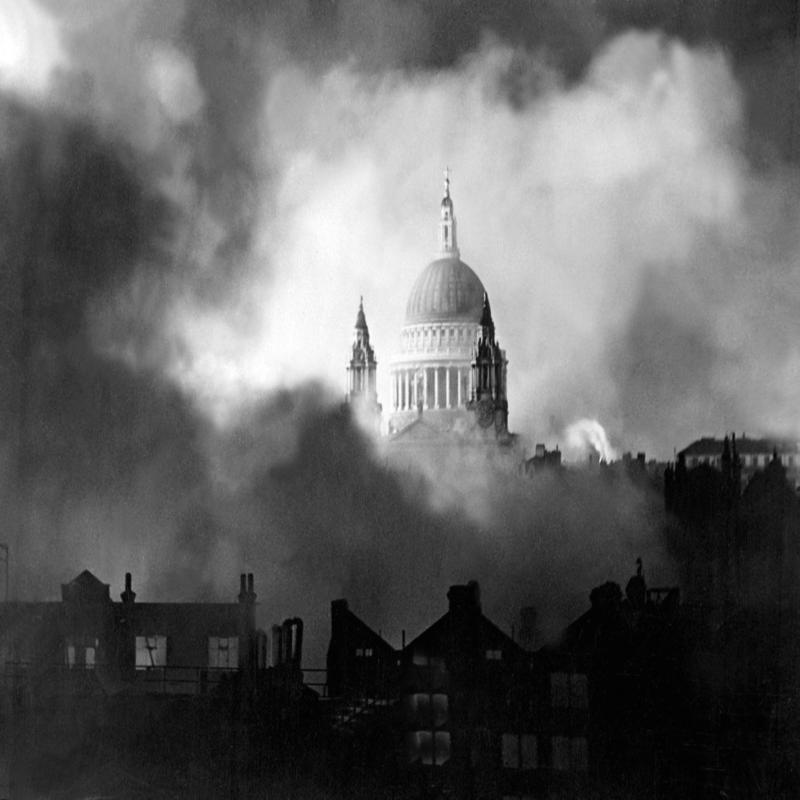 St. Paul's was surrounded by fire, but it came through. It stood there in its enormous proportions - growing slowly clearer and clearer, the way objects take shape at dawn. It was like a picture of some miraculous figure that appears before peace-hungry soldiers on a battlefield.
The streets below us were semi-illuminated from the glow. Immediately above the fires the sky was red and angry, and overhead, making a ceiling in the vast heavens, there was a cloud of smoke all in pink. Up in that pink shrouding there were tiny, brilliant specks of flashing light-antiaircraft shells bursting. After the flash you could hear the sound.
Up there, too, the barrage balloons were standing out as clearly as if it were daytime, but now they were pink instead of silver. And now and then through a hole in that pink shroud there twinkled incongruously a permanent, genuine star - the old - fashioned kind that has always been there.
Below us the Thames grew lighter and all around were the shadows - the dark shadows of buildings and bridges that formed the base of this dreadful masterpiece.
Later on I borrowed a tin hat and went out among the fires. That was exciting too; but the thing I shall always remember above all the other things in my life is the monstrous loveliness of that one single view of London on a holiday night - London stabbed with great fires, shaken by explosions, its dark regions along the Thames sparkling with the pin points of white-hot bombs, all of it roofed over with a ceiling of pink that held bursting shells, balloons, flares and the grind of vicious engines; and in yourself the excitement and anticipation and wonder in your soul that this could be happening at all.
These things all went together to make the most hateful, most beautiful single scene I have ever known."
Tagged as: Fact File, War
Share this post: