Posted on 9th January 2021
Pierre de Bourdeille, was a French aristocrat who had remained with and been a confidante of Mary, Queen of Scots, during the last few weeks of her captivity. Here he provides an account of her final hours and execution:
On February 7, 1587, the representatives of the English Queen, reached the Castle of Fotheringay, where the Queen of Scotland was confined at that time, between two and three o'clock in the afternoon. In the presence of her jailer, Paulet, they read their commission regarding the execution of the prisoner, and said that they would proceed with their task the next morning between seven and eight o'clock. The jailer was then ordered to have everything in readiness.
Without betraying any astonishment, the Queen thanked them for their good news, saying that nothing could be more welcome to her, since she longed for an end to her miseries, and had been prepared for death ever since she had been sent as a prisoner to England. However, she begged the envoys to give her a little time in which to make herself ready, make her will, and place her affairs in order. It was within their power and discretion to grant these requests. The Count of Shrewsbury replied rudely:
'No, no, Madam you must die, you must die! Be ready between seven and eight in the morning. It cannot be delayed a moment beyond that time.'
The scaffold had been erected in the middle of a large room. It measured twelve feet along each side and two feet in height, and was covered by a coarse cloth of linen. 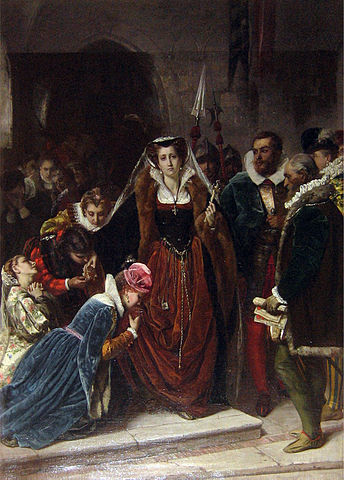 The Queen entered the room full of grace and majesty, just as if she were coming to a ball. There was no change on her features as she entered.
Drawing up before the scaffold, she summoned her major-domo and said to him:
'Please help me mount this. This is the last request I shall make of you.'
Then she repeated to him all that she had said to him in her room about what he should tell her son. Standing on the scaffold, she asked for her almoner, begging the officers present to allow him to come. But this was refused point-blank. The Count of Kent told her that he pitied her greatly to see her thus the victim of the superstition of past ages, advising her to carry the cross of Christ in her heart rather than in her hand. To this she replied that it would be difficult to hold a thing so lovely in her hand and not feel it thrill the heart, and that what became every Christian in the hour of death was to bear with him the true Symbol of Redemption.
Standing on the scaffold, Mary angrily rejected her captors' offer of a Protestant Minister to give her comfort. She knelt and begged that Queen Elizabeth spare her ladies-in-waiting. She then prayed for the conversion of the Isle of Britain and Scotland to the Catholic Church. When this was over, she summoned her women to help her remove her black veil, her head-dress, and other ornaments. When the executioner attempted to do this, she cried out: 'Nay, my good man, touch me not!'
But she could not prevent him from touching her, for when her dress was lowered as far as her waist; the scoundrel caught her roughly by the arm and pulled off her doublet. Her skirt was cut so low that her neck and throat, whiter than alabaster, were revealed. She concealed these as well as she could, saying that she was not used to disrobing in public, especially before so large an assemblage.
There were about four or five hundred people present.
The executioner fell to his knees before her and implored her forgiveness. The Queen told him that she willingly forgave him and all who were responsible for her death, as freely as she hoped her sins would be forgiven by God. Turning to the woman to whom she, had given her handkerchief, she asked for it.
She wore a golden crucifix, made out of the wood of the true cross, with a picture of Our Lord on it. She was about to give this to one of her women, but the executioner forbade it, even though Her Majesty had promised that the woman would give him thrice its value in money.
After kissing her women once more, she bade them go, with her blessing, as she made the sign of the cross over them. One of them was unable to keep from crying, so that the Queen had to impose silence upon her by saying she had promised that nothing of the kind would interfere with the business in hand. They were to stand back quietly, pray to God for her soul, and bear truthful testimony that she had died in the bosom of the Holy Catholic religion.
The Queen quickly, and with great courage, knelt dawn, showing no signs of faltering. So great was her bravery that all present were moved, and there were few among them that could refrain from tears. In their hearts they condemned themselves far the injustice that was being done. 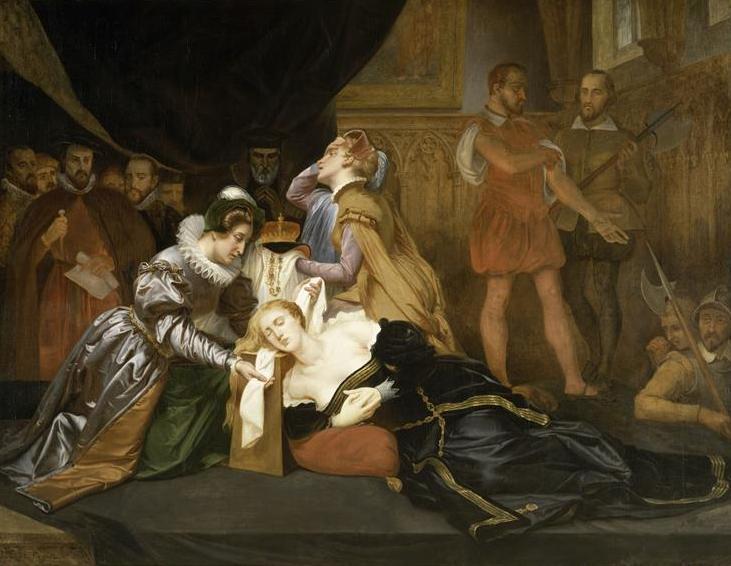 The executioner, or rather the minister of Satan, strove to kill not only her body but also her soul, and kept interrupting her prayers. The Queen repeated in Latin the Psalm beginning In te, damine, speravi; nan canfundar in aeternum. When she was through she laid her head on the block, and as she repeated the prayer, the executioner struck her a great blow upon the neck, which was not, however, entirely severed. Then he struck twice more, since it was obvious that he wished to make the victim's martyrdom all the more severe. It was not so much the suffering, but the cause, that made the martyr.
The executioner then picked up the severed head and, showing it to those present, cried out: 'God save Queen Elizabeth! May all the enemies of the true Evangel perish thus!'
Saying this, he stripped off the dead Queen's head-dress, in order to show her hair, which was now white, and which she had been afraid to show to everyone when she was still alive, or to have properly dressed, as she did when her hair was fair and light.
It was not old age that had turned it white, for she was only thirty-five when this took place, and scarcely forty when she met her death, but the troubles, misfortunes, and sorrows which she had suffered, especially in her prison."
Tagged as: Fact File, Tudor & Stuart
Share this post: