Posted on 8th January 2021
On the morning of 15 October 1917, Dutch born Margerethe Zelle, better known as the exotic dancer Mata-Hari, was awoken from a deep sleep in her prison cell at St Lazare on the outskirts of Paris. She had earlier been found guilty of spying for the Germans and sentenced to death. Her appeal for clemency had been declined and the fateful day had arrived. Henry Wales, a British journalist, witnessed events:
Father Arbaux, accompanied by two sisters of charity, Captain Bouchardon, and Maitre Clunet, her lawyer, entered her cell, where she was still sleeping - a calm, untroubled sleep, it was remarked by the turnkeys and trusties.
The sisters gently shook her. She arose and was told that her hour had come.
'May I write two letters?' was all she asked.
Consent was given immediately by Captain Bouchardon, and pen, ink, paper, and envelopes were given to her. She seated herself at the edge of the bed and wrote the letters with feverish haste. She handed them over to the custody of her lawyer. Then she drew on her stockings, black, silken, filmy things, grotesque in the circumstances. She placed her high-heeled slippers on her feet and tied the silken ribbons over her insteps.
She arose and took the long black velvet cloak, edged around the bottom with fur and with a huge square fur collar hanging down the back, from a hook over the head of her bed. She placed this cloak over the heavy silk kimono which she had been wearing over her nightdress.
Her wealth of black hair was still coiled about her head in braids. She put on a large, flapping black felt hat with a black silk ribbon and bow. Slowly and indifferently, it seemed, she pulled on a pair of black kid gloves. Then she said calmly:
'I am ready.' 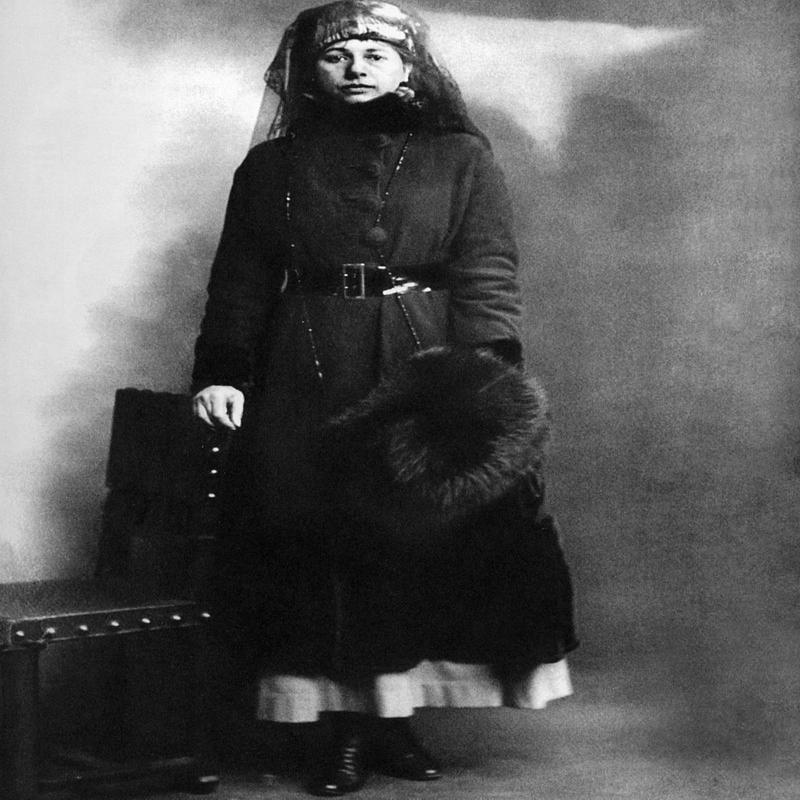 The party slowly filed out of her cell to the waiting automobile; the car sped through the heart of the sleeping city. It was scarcely half-past five in the morning and the sun was not yet fully up.
Clear across Paris the car whirled to the Caserne de Vincennes, the barracks of an old fort.
The twelve Zouaves, forming the firing squad, stood in line, their rifles at ease. An Officer stood behind them, sword drawn. The automobile stopped, and the party descended, Mata Hari last. The party walked straight to the spot, where a little hummock of earth reared itself seven or eight feet high and afforded a background for such bullets as might miss the target.
As Father Arbaux spoke with the condemned woman, a French officer approached, carrying a white cloth. 'The blindfold,' he whispered to the nuns who stood there and handed it to them. 'Must I wear that?' asked Mata Hari, turning to her lawyer, as her eyes glimpsed the blindfold. Maitre Clunet turned interrogatively to the French officer. 'If Madame prefers not, it makes no difference,' replied the officer, hurriedly turning away.
Mata Hari was not bound and she was not blindfolded instead she stood gazing steadfastly at her executioners, when the priest, the nuns, and her lawyer stepped away from her. The officer in command of the firing squad, who had been watching his men like a hawk that none might examine his rifle and try to find out whether he was destined to fire the blank cartridge which was in the breech of one rifle, seemed relieved that the business would soon be over.
A sharp, crackling command and the file of twelve men assumed rigid positions at attention. Another command, and their rifles were at their shoulders; each man gazed down his barrel at the breast of the woman who was the target. She did not move a muscle.
The Officer in charge had moved to a position where from the corners of their eyes they could see him. His sword was extended in the air, it dropped. The sun flashed on the burnished blade as it described an arc in falling. Simultaneously the sound of the volley rang out as flame and a tiny puff of greyish smoke issued from the muzzle of each rifle.
At the report Mata Hari fell.
She did not die as actors and moving picture stars would have us believe that people die when they are shot. She did not throw up her hands nor did she plunge straight forward or straight back. Instead she seemed to collapse. Slowly and inertly she settled to her knees, her head up always, and without the slightest change of expression on her face. For the fraction of a second it seemed she tottered there, on her knees, gazing directly at those who had taken her life. Then she fell backward, bending at the waist, with her legs doubled up beneath her. She lay prone, motionless, with her face turned towards the sky.
A non-commissioned officer, who accompanied a lieutenant, drew his revolver from the big, black holster strapped about his waist. Bending over, he placed the muzzle of the revolver almost - but not quite - against the left temple of the spy. He pulled the trigger, and the bullet tore into the brain of the woman.
Mata Hari was surely dead."
Tagged as: Fact File
Share this post: