Posted on 17th February 2021
Irma Grese was born into a working class family from the small rural town of Wrechen near Mecklenburg on October 1, 1923. Her father Alfred was a dairy worker who joined the Nazi Party in 1937. He was not it seems a very committed Nazi but the same could not be said of his daughter who soon became obsessed with the Party.
A failure at school where she was regularly bullied and mocked for being a dunce it was perhaps understandable that she would seek solace elsewhere and so she neglected her studies to spend time with the Bund Deutscher Madel or League of German Maidens where she was made welcome and enjoyed the physical outdoor nature of their activities.
Her preoccupation with the Nazi's only increased following the suicide of her mother Berta in 1936 when against her father's wishes she left school aged just 15 with no qualifications and no real prospects to spend more time in Nazi Party activity. Irma's life quickly became one of short-term low paid jobs and bouts of unemployment. The best chance of her improving her prospects lay with marriage but she had shown no real interest in men and had even less success. Her life was meandering and she made only one half-hearted attempt at self-improvement when she applied to train as a nurse. Her application was declined. So she continued to spend time with the Party and do casual jobs w when and where she could.
During the early years of World War Two, German women were not expected to engage in war work and there was no call for them to volunteer for the factories, work on the land or do the jobs usually reserved for men; their contribution to the Third Reich would be to keep home and raise children so unemployment among women remained high.
Click on this text to edit it. 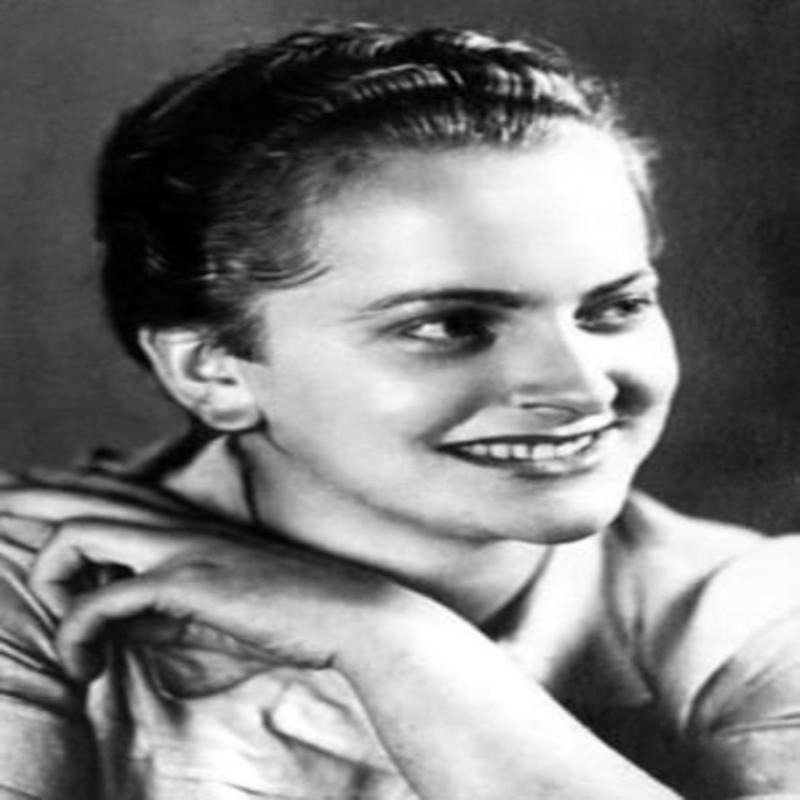 In July, 1942, she was sent by the Labour Exchange to work at Ravensbruck Concentration Camp. She would later claim that it was only to do menial tasks and that she only did these reluctantly though why an enthusiastic Nazi like Irma would be disinclined to work for the SS is a mystery. Despite claims of foot-dragging on her part her new employers were impressed enough with her to in March 1943, transfer her to Auschwitz where she very quickly rose to be a senior guard. For a woman whose life up to that point had been one of ridicule and abuse to wield absolute control over the female prisoners under her charge was a joy and she revelled in her new power.
Irma would very soon become feared for both her brutality and her sexual proclivities. She would roam the Camp it was said in her SS uniform, wearing heavy boots, carrying a whip, and accompanied by her dogs. In this manner she terrorised the 30,000 mostly Jewish women she was responsible for. Some of those women who were prisoners in her charge later testified that she indulged in physical, emotional, and sexual torture. She would regularly and arbitrarily beat prisoners or set her dogs upon them. She would also force many of the younger prisoners to strip naked and perform, often sadistic, sexual acts on each other while she looked on. This she did for her own personal gratification and if they refused to comply she did not hesitate to shoot them out of hand.
Irma was to remain at Auschwitz for the duration of the war and as the Allies closed in on the Camp she made no attempt to flee or hide. She was taken into custody by the British in April, 1945. Singled out by prisoners she had abused as someone of interest their accusations were believed and it was decided to try her for murder. 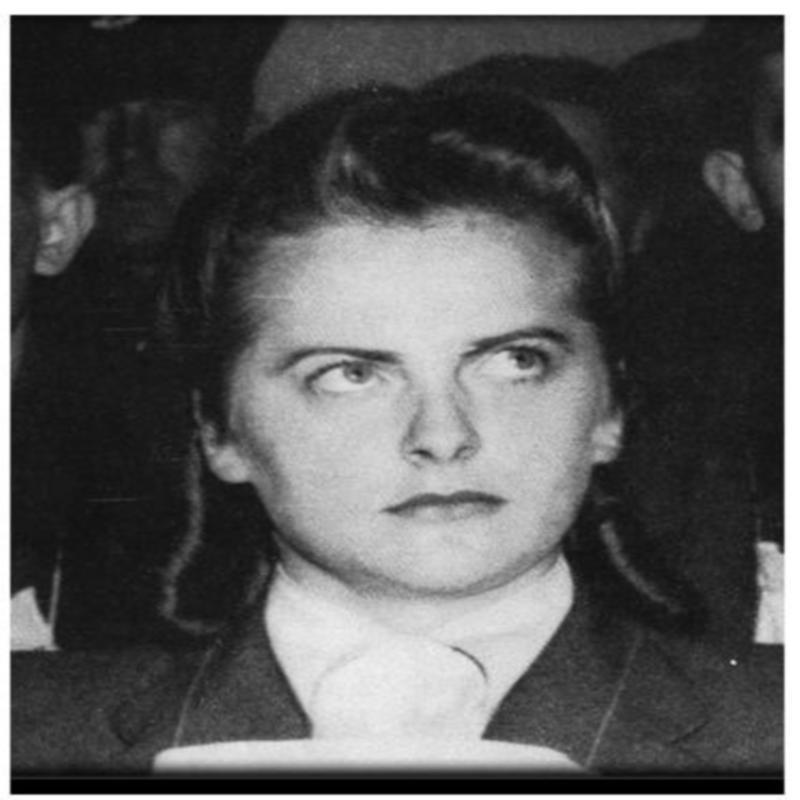 At her trial Irma’s demeanour was both arrogant and defiant. Her only defence was that she had been forced to work at the Camps and that not to do so would have meant punishment and that not to obey orders once there her own execution. But fear had never been her motivation and her manner throughout the trial where she showed no remorse because she felt none said otherwise.
Irma Grese is only one of the many war criminals brought to trial to find the mantra I was only obeying orders no defence. She was found guilty and sentenced to hang. Yet she remained defiant to the end and as the noose was placed around her neck she cried Schnell! Schnell! No doubt the same words she had screamed so often at her prisoners. The unrepentant Irma Grese died was executed for her crimes on 13 December, 1945. She was 22 years of age.
Ilse Koch, soon to be better known as the 'Beast of Buchenwald' was born IIse Kohler in Dresden on 22 December, 1906 into a stable middle class family and was by all accounts a happy and contented child. At school she was hard-working and popular with her fellow pupils. After leaving school she trained as a bookkeeper and worked for a local accountancy firm.
In 1932 she joined the Nazi Party and regularly attended local Nazi Party meetings. At one of these meetings she met her future husband Karl Otto Koch, an SS Officer. During 1941 she worked briefly as a secretary at Sachsenhausen Concentration Camp before being transferred to Buchenwald where her husband was soon to be made Commandant.
For a time Ilse was happy to play the role of the dutiful hausfrau but soon began to enjoy her new found new status as the Camp Commandants wife and especially the respect it brought her. She began to play an ever greater role in the running of the Camp and in short time she was promoted to SS Aufscherin, or Overseer. 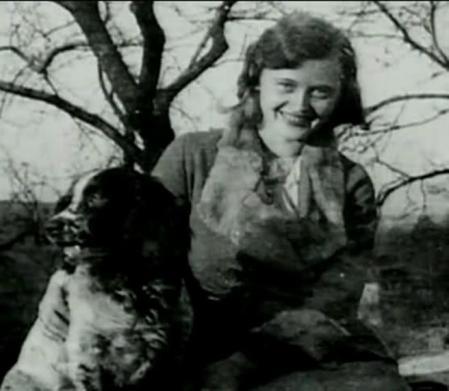 According to witness reports Ilse Koch was a violent brute of a woman intoxicated with power. She regularly beat prisoners and would do so until they were senseless and liked nothing more than to ride her horse through the Camp striking out with her whip at anyone who dared hamper her progress. Her penchant for violence and bullying it seems was only bettered by a passion for collecting and she liked to collect household artefacts made of human skin. To help facilitate this passion she would select prisoners with extravagant tattoos for execution. Their skin would then be removed and tanned and made into items for her personal use such as lampshades, gloves and book covers. She was known to have used a handbag made of human skin and liked to decorate her home with the shrunken skulls of her victims.
But Ilse’s war was to be a short one when early 1943, Ilse and Karl Koch were arrested by the Gestapo for embezzlement of funds. Found guilty Ilse was sentenced to a year in prison while her husband sentenced to death was executed by firing squad at Buchenwald, the same camp he once ran, in April 1945 just a week before it was liberated by the Allies.
Upon her release Ilse went to live with relatives where she hoped for a quiet life but her location was revealed to the American’s who arrested her on 30 June, 1945. Tried by the War Crimes Tribunal she was found guilty and sentenced to life imprisonment but released just 4 years later it was said for lack of evidence. Her release however, caused such an outcry in a Germany now trying to come to terms with its recent past that she was re-arrested, re-tried, and again sentenced to life imprisonment.
Ilse Koch hanged herself in her cell at Alcharch Prison, Bavaria on 1 September, 1967, aged 60, delusional and scared.
Tagged as: Modern, Women
Share this post: