Posted on 7th February 2021
The River Rubicon which runs from the Apennines to the Adriatic Coast near Rimini may not be geographically significant. It hardly cuts a swathe through the landscape but it would nonetheless lend its name to one of the most significant events in history.
In his ten years as Governor of Gaul Julius Caesar had enhanced his military reputation to the point where it outshone even that of his former friend and now great rival Pompey who de facto ruled in Rome. In doing so he had amassed a vast fortune which he used to buy influence and support in the city.
With Gaul subdued and his return imminent the Senate in Rome acted to curb Caesar’s ambitions. He was ordered to resign his command, disband his army, and return to civilian life. If he refused then he would be declared an Enemy of the People and every Roman citizen would be obliged to do him harm. Moreover, Pompey was charged with enforcing the edict should it be ignored.
Caesar received news of the Senate’s decision while at Winter Quarters at Ravenna in Northern Italy. He now faced a stark choice either do as the Senate demanded thereby ending his political career or disobey them and plunge Rome into civil war.
The law forbade him to lead an army across the River Rubicon and march it south but upon learning that his political allies in Rome had been forced to flee the city he felt he had no choice. With just one Legion at his back he crossed the Rubicon, the die had been cast, he had gone beyond the point of no return.
This is the Roman historian Suetonius’s account of that fateful decision: 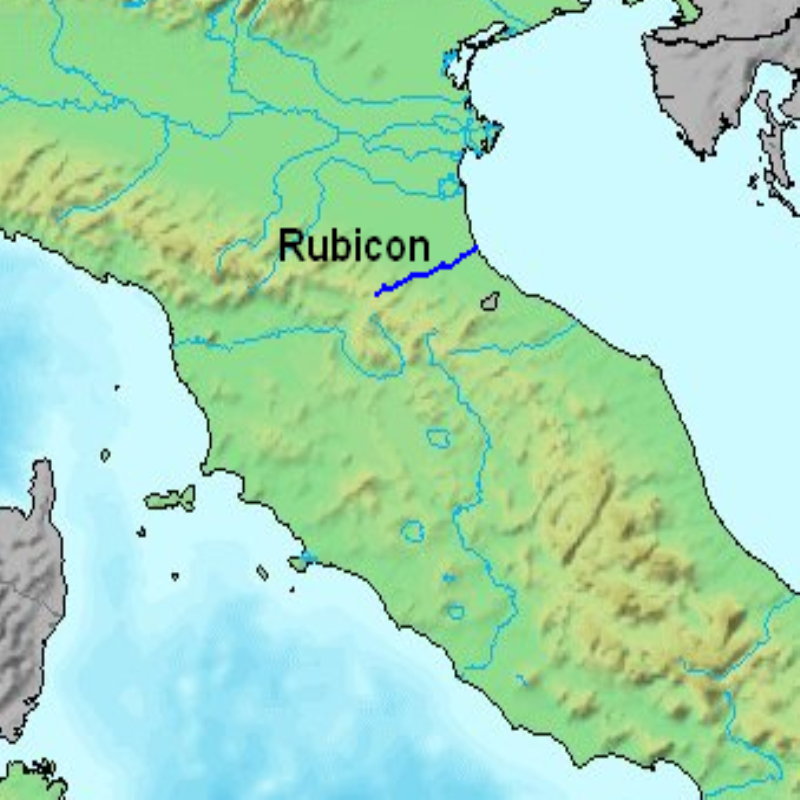 "When the news came [to Ravenna, where Caesar was staying] that the interposition of the tribunes in his favour had been utterly rejected, and that they themselves had fled Rome, he immediately sent forward some cohorts, yet secretly, to prevent any suspicion of his plan; and to keep up appearances, he attended the public games and examined the model of a fencing school which he proposed building, then - as usual - sat down to table with a large company of friends.
However, after sunset some mules from a near-by mill were put in his carriage, and he set forward on his journey as privately as possible, and with an exceedingly scanty retinue. The lights went out.. He lost his way and wandered about a long time – till at last, by help of a guide, whom he discovered towards daybreak, he proceeded on foot through some narrow paths, and again reached the road. Coming up with his troops on the banks of the Rubicon, which was the frontier of his province, he halted for a while, and revolving in his mind the importance of the step he meditated, he turned to those he about him, saying: ‘still we can retreat! But once past this little bridge nothing is left but to fight it out with arms!’
As he hesitated an incident occurred - a man of strikingly noble mien and graceful aspect appeared close at hand, and played upon a pipe. To hear him not merely some shepherds, but soldiers too came flocking from their posts, and amongst them some trumpeters. He snatched a trumpet from one of them and ran to the river with it; then sounding the "Advance!" with a piercing blast he crossed to the other side. At this Caesar cried out, 'Let us go where the omens of the Gods and the crimes of our enemies summon us! THE DIE IS NOW CAST!'
Accordingly he marched his army over the river; then he showed them the tribunes of the Plebs, who on being driven from Rome had come to meet him, and in the presence of that assembly, called on the troops to pledge him their fidelity; tears springing to his eyes [as he spoke] and his garments rent from his bosom."
.
Tagged as: Ancient & Medieval, Fact File
Share this post: