Posted on 8th January 2021
Edward Grim was a monk from Cambridge and an admirer of Thomas Becket who was visiting Canterbury Cathedral on the day, 29 December 1170, when the four knights came to murder the Archbishop. Unlike others in the vicinity at the time who ran and hid Grim stood with the cleric and defended him until wounded he could do no more. This is his account of events written just a few years later:
The murderers followed him; 'Absolve', they cried, 'and restore to communion those whom you have excommunicated, and restore their powers to those whom you have suspended.'
He answered, 'There has been no satisfaction, and I will not absolve them.'
'Then you shall die,' they cried, 'and receive what you deserve.'
'I am ready,' he replied, 'to die for my Lord, that in my blood the Church may obtain liberty and peace. But in the name of Almighty God, I forbid you to hurt my people whether clerk or lay.' 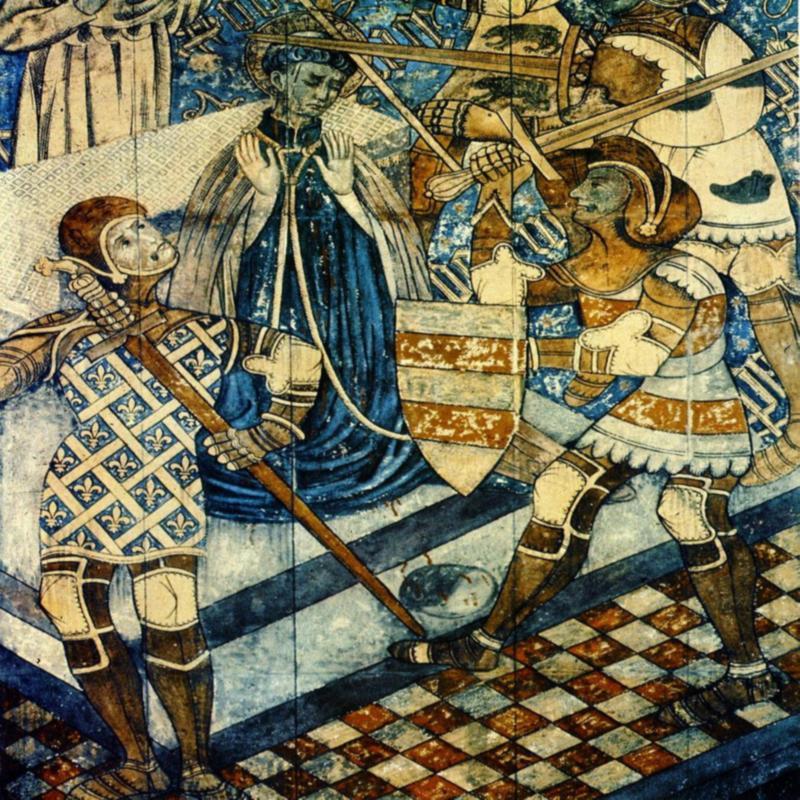 Then they lay sacrilegious hands on him, pulling and dragging him that they may kill him outside the church, or carry him away a prisoner, as they afterwards confessed. But when he could not be forced away from the pillar, one of them pressed on him and clung to him more closely. Him he pushed off calling him 'pander', and saying, 'Touch me not, Reginald; you owe me fealty and subjection; you and your accomplices act like madmen.'
The knight, fired with a terrible rage at this severe repulse, waved his sword over the sacred head. 'No faith', he cried, 'nor subjection do I owe you against my fealty to my lord the King.'
Then the unconquered martyr seeing the hour at hand which should put an end to this miserable life and give him straightway the crown of immortality promised by the Lord, inclined his neck as one who prays and joining his hands he lifted them up, and commended his cause and that of the Church to God, to St. Mary, and to the Blessed Martyr Denys. Scarce had he said the words than the wicked knight, fearing lest he should be rescued by the people and escape alive, leapt upon him suddenly and wounded this lamb who was sacrificed to God on the head, cutting off the top of the crown which the sacred unction of the chrism had dedicated to God; and by the same blow he wounded the arm of him who tells this. For he, when the others, both monks and clerks, fled, stuck close to the sainted Archbishop and held him in his arms till the one he interposed was almost severed.
Then he received a second blow on the head but still stood firm. At the third blow he fell on his knees and elbows, offering himself a living victim, and saying in a low voice:
'For the Name of Jesus and the protection of the Church I am ready to embrace death.'
Then the third knight inflicted a terrible woumd as he lay, by which the sword was broken on the pavement and the crown which was large was separated from the head. The fourth knight prevented any from interfering so that others might freely perpetrate the murder. As to the fifth, no knight but that clerk who had entered with the knights, that a fifth blow might not be wanting to the martyr who was in other things like to Christ, he put his foot on the neck of the holy priest and precious martyr, and, horrible to say, scattered his brain and blood over the pavement, calling out to the others -Let us away, knights; he will rise no more.
Tagged as: Fact File
Share this post: