Posted on 1st July 2021
Following the defeat of Bonnie Prince Charlie and the Jacobite rebellion he led on barren, windswept Drumrossie Moor near Culloden on 20 April 1746, the Hanoverian Government in London was determined to destroy the Highland Clan system and Jacobitism once and for all. And it passed a raft of legislation designed to do just that.
In August 1746, it passed the Act of Proscription intended to disarm the Highlanders, which banned them from possessing broadswords and flintlocks on pain of imprisonment and/or transportation to the colonies; and although it didn’t specify the Bagpipes as a weapon of war they would have been included in the legislation.
So effective was this law that Dr Samuel Johnson on his tour of Scotland and the Western Isles in 1775 wrote: “The last law by which the Highlanders are deprived of their arms has operated with efficacy beyond expectations; the arms were collected with such rigour, that every house was despoiled of its defence.”
Also included in the new law was the Dress Act, which banned the wearing of Highland costume including the kilt and plaid. Any public display of Clan tartan was dealt with harshly while the Heritable Jurisdictions (Scotland) Act of the same year also removed the authority of the Clan Chieftains. In future all such duties (and obligations) reverted to the Crown. 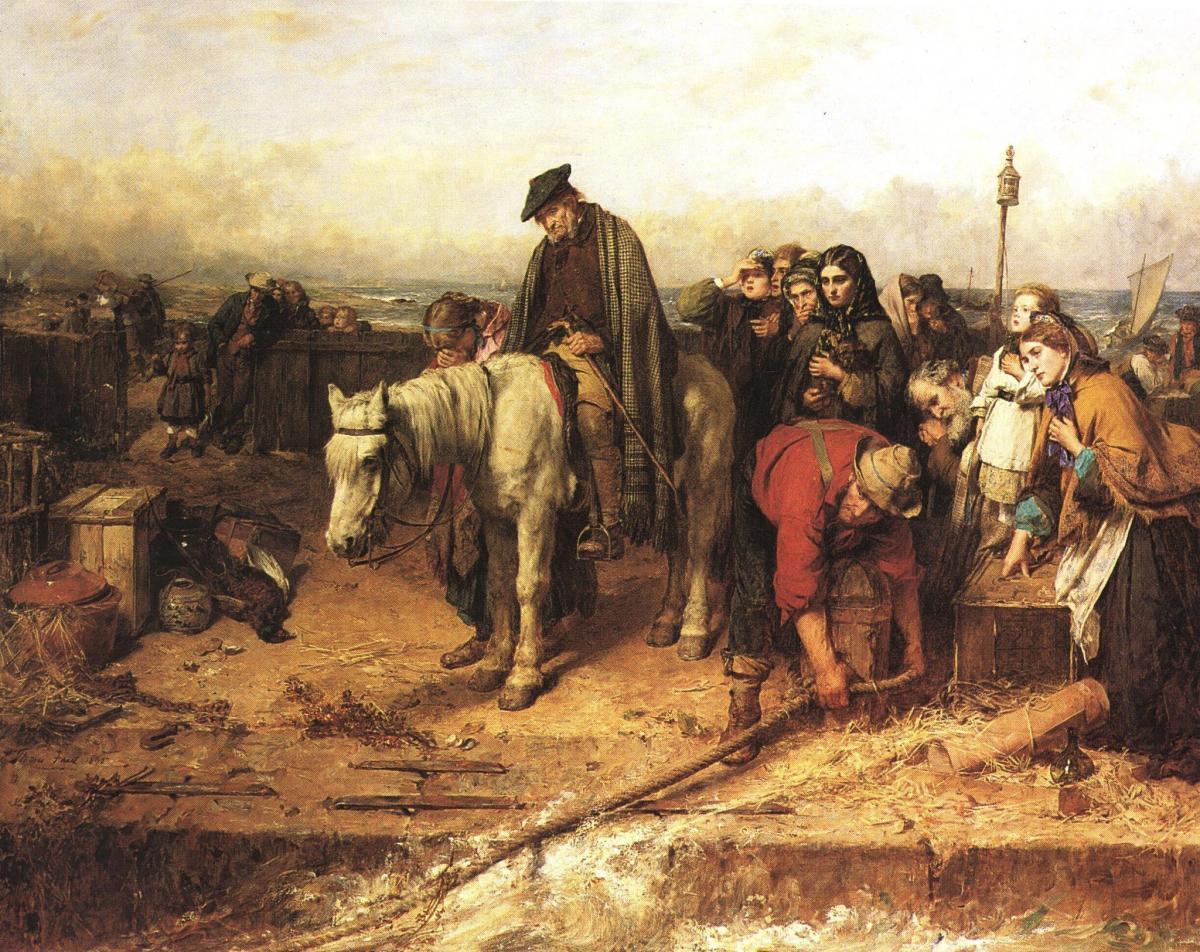 This was all part of a specific programme intended to eliminate Gaelic culture from the Highlands and assimilate it fully into the ‘New’ Great Britain. A policy that was further enhanced by the Highland Clearances, or the forced eviction of their tenants by the Clan Chieftains who wanted to their tenants and turn the land over to more profitable sheep farming. This not only forced tens of thousands from the land but induced many to emigrate abroad but for those men infused with the warrior spirit there was another option, to enlist in the army of their oppressors.
The British Army had long raised troops from Lowland Scotland and the Borders and around half of the Duke of Cumberland’s army at Culloden were in fact Scottish, indeed more Scots fought against than for the Bonnie Prince.
The elimination of Jacobitism had been so thorough that by the 1780’s most of the prohibitions against the Highland Clans ha been removed and it became possible for young men to enlist in Regiments specifically drawn from the Highlands and in which they could wear the kilt, the tartan, play the bagpipes and maintain the old Clan traditions. Indeed, so complete was the Highlanders rehabilitation that they were actively encouraged to do so. 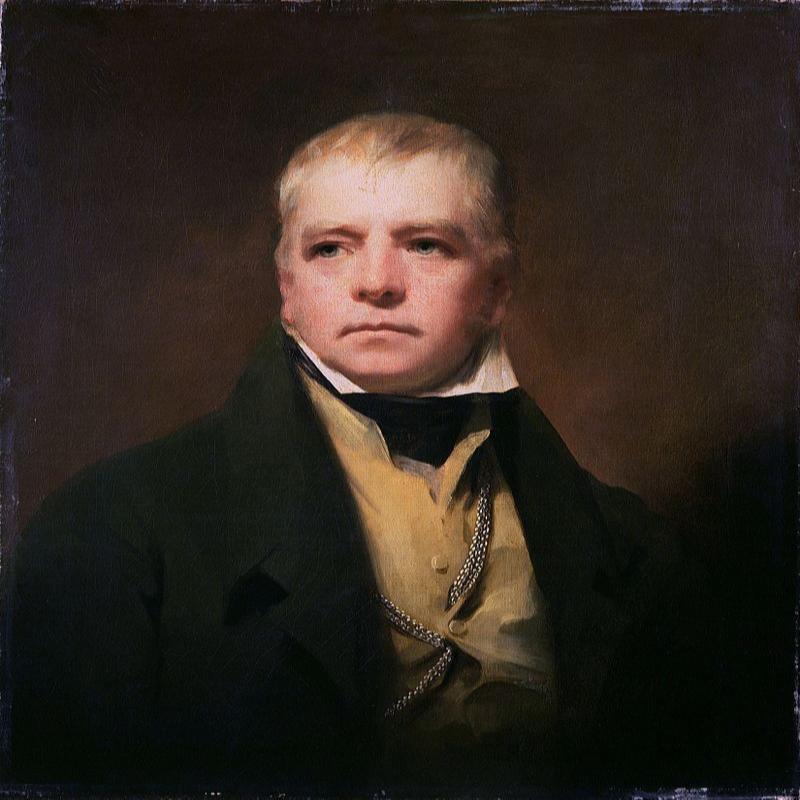 This was in large part due to the romanticising of the Highlands in the novels of popular authors such as Sir Walter Scott and others as a place of noble endeavour, unquenchable spirit and raw courage; a commitment to wage war epitomised by the exploits of Regiments such as the Black Watch, the Gordon Highlanders and the Argyll and Sutherland Highlanders.
By the time of the Napoleonic Wars the King’s Highland Regiments had become some of the most respected and feared in the British Army and they would come to symbolise British military prowess. Wherever the Empire went so went the Highland Regiments who along with their countrymen in various capacities became a driving force of Imperial expansion becoming a familiar sight on battlefields as distant as Egypt, Burma, China, South Africa, and the Indian sub-Continent. 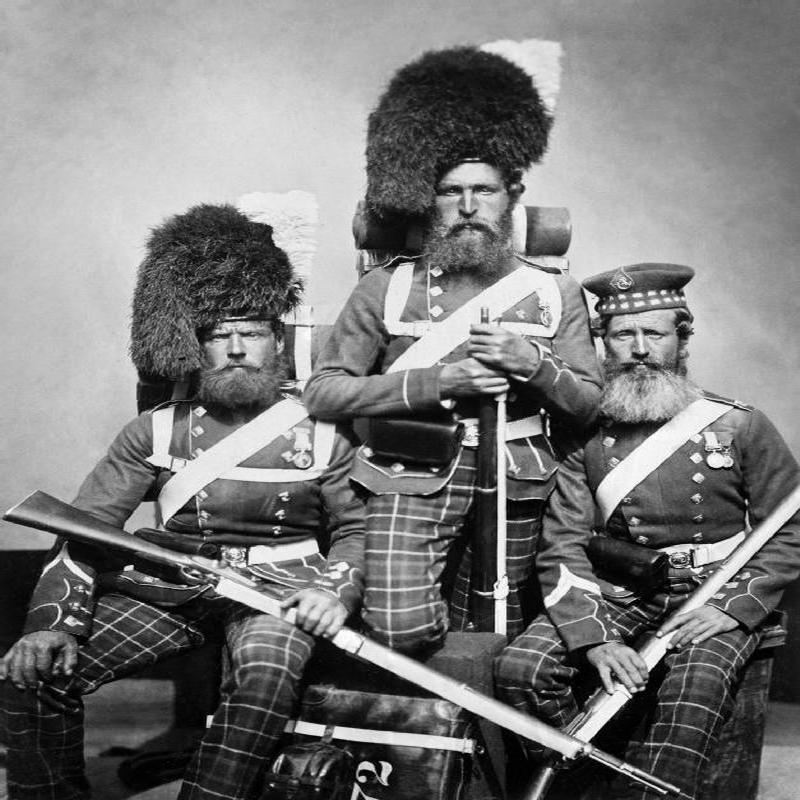 Along with their distinctive dress it was the swirl of the bagpipe accompanying them on their march that marked out the Highlanders presence on the battlefield with the story of the Piper playing on regardless of shot and shell thrilling young boys and making their countrymen proud.
It was the stuff of legend and was well established long before the Great War and its mechanised slaughter made acts of valour more deeds of dismay than those of wonder. 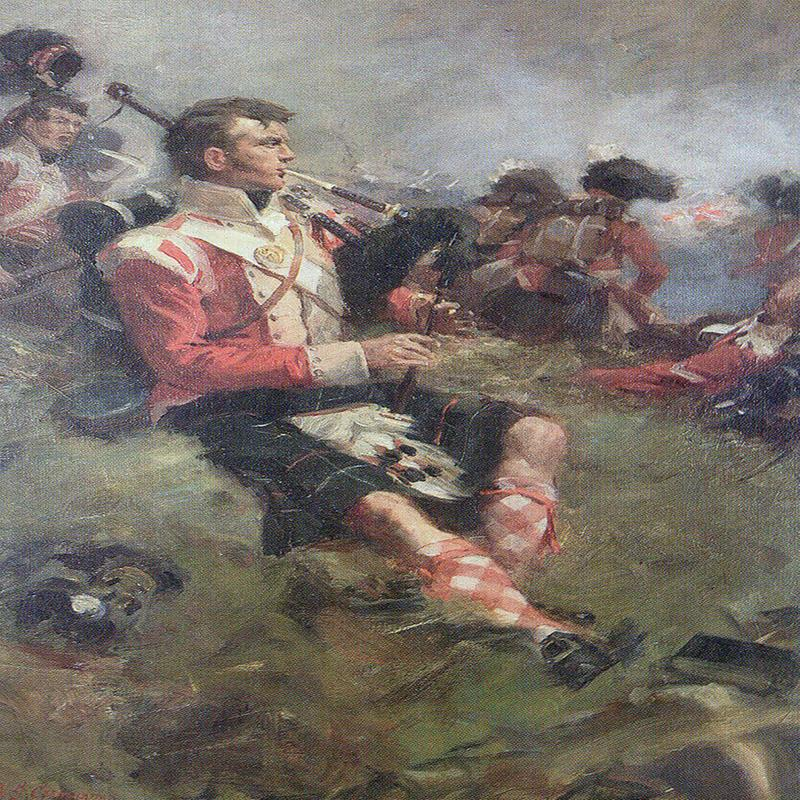 On 21 August 1808, during the Peninsular War at the hard fought Battle of Vimeiro in Portugal, Piper George Clark of the 71st Highland Regiment continued to play his pipes despite being seriously wounded; no longer able to walk he perched himself upon a rock where he became a target for French sharpshooters but still he continued to play.
Awards were generally the preserve of the Officer Class but Piper Clark’s fame soon spread and his heroism would not go unrecognised. Upon his return to Scotland he was presented with a mounted set of silver pipes by the Highland Society of Edinburgh.
The Crimean War (1853-6) was the first to see dispatches from the front-line regularly reported in newspapers and periodicals and the first-hand descriptions of the fighting at Alma, Inkerman, Balaclava and elsewhere stirred the blood not only of the British public but also their Queen who was dismayed to discover that there was no formal mechanism for recognising the heroism of the soldiers engaged. So, working alongside her husband Albert, the Prince Consort, in January 1856 she introduced the Victoria Cross. It was to be Britain’s highest military honour awarded on merit regardless of rank, class and social background.
On 20 October 1897, during the Tirah Campaign to capture the Khyber Pass and secure the northern approaches to India, George Frederick Findlater of the Gordon Highlanders, a last minute replacement for the regular Pipe-Major who had been wounded earlier, became the first Piper to be awarded the Victoria Cross. 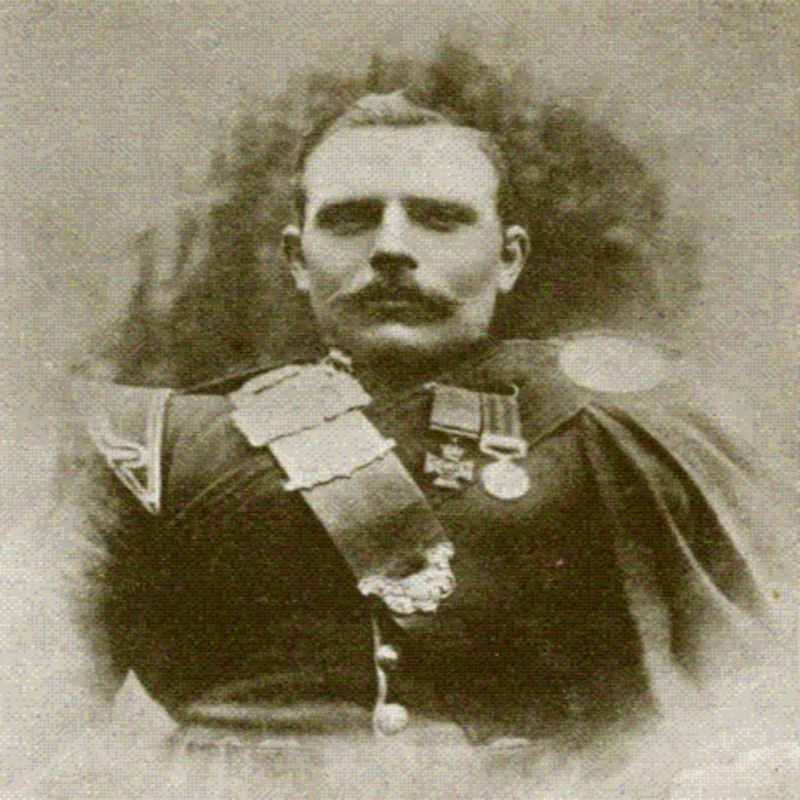 Ordered to charge across open ground and storm the Dargai Heights Sergeant Findlater was advancing at the head of the Regiment when he was shot through both feet and a leg. In great pain and unable to march any further he nonetheless continued to play the Haughs O’ Cromdale as he sat upon the ground.
Findlater’s heroism was widely reported throughout Britain and upon leaving the army wearing his Victoria Cross he would reprise his derring-do at public appearances and in Music Hall, much to the chagrin of his former employers. He was in the end persuaded to abandon his stage career for farming re-enlisting in the army upon the outbreak of World War One.
The most celebrated Piper of his or any generation however, was Daniel Logan Laidlaw, the famed ‘Piper of Loos.’
He was already 40 years old and a Piper in the 7th Battalion of the King’s Own Scottish Borderers when on 25 September 1915, he was ordered along with the rest of the Company to leave their position on Hill 70 overlooking the bleak town of Loos and advance on the German lines; but an earlier poison gas attack had been blown back in their faces by a countervailing wind. As the gas spread so did the panic and cowering in their trench it was proving impossible to get the troops to budge. Eventually in desperation Lieutenant Young shouted – For God’s sake Laidlaw, do something! 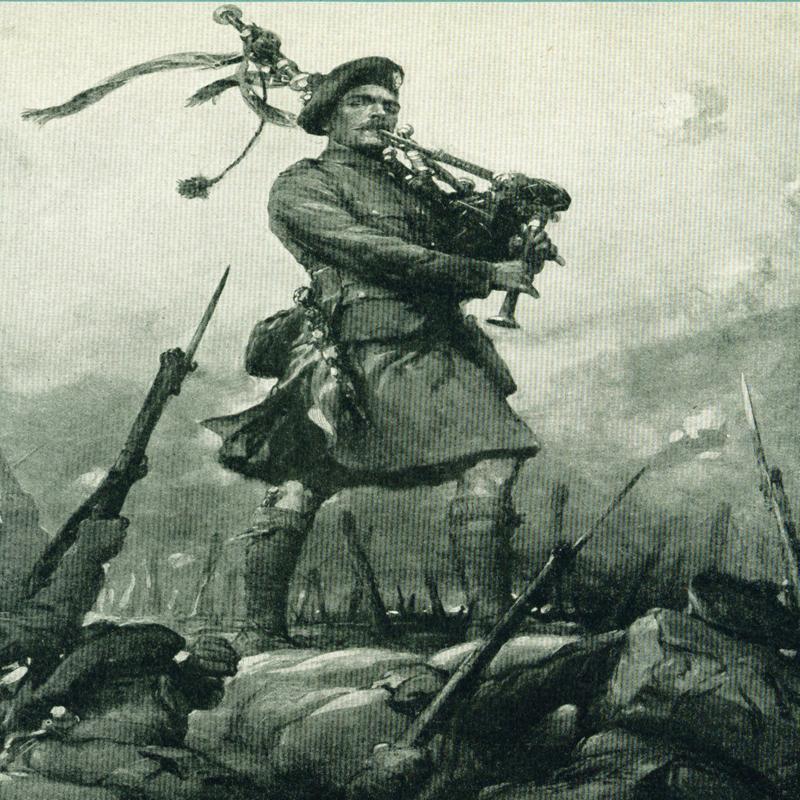 Preparing his pipes Laidlaw mounted the parapet alone and marching up and down the length of the trench began to play ‘All the Blue Bonnets are over the Border,’ an old tune of Jacobite rebellion. Encouraged by Laidlaw and inspired by the sound of the bagpipes the men began to leave the trench and as they advanced so did Laidlaw alongside them, still playing, across no-man’s-land, over the barbed wire, and through the first line of German defences before he was finally felled.
Unlike the 50 Pipers who did lose their lives at Loos, Piper Daniel Laidlaw survived the battle and was awarded the Victoria Cross for his courage.
The other Piper to be awarded Britain’s highest military honour during the Great War the Canadian, James Cleland Richardson of the Seaforth Highlanders of Canada. There were many Highland Regiments raised in the colonies from among those of Scottish descent which maintained the same traditions. 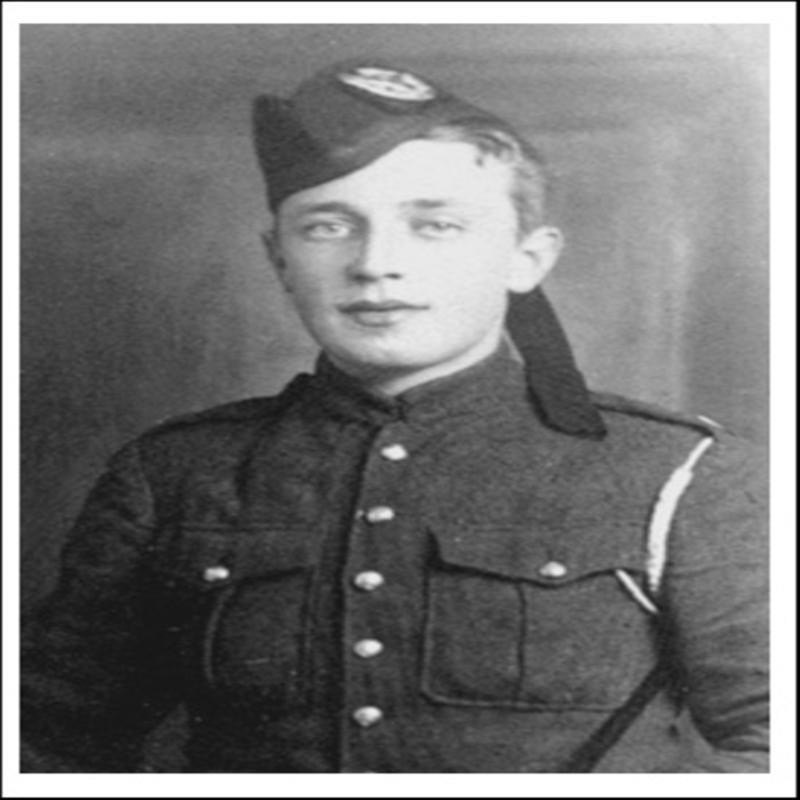 On 8 October 1916 during the battle for the Ancre Heights his Company became entangled in the enemy wire and under intense artillery and machine gun fire the attack began to falter. The 21 year old Piper Richardson upon his own initiative marched along the line of the wire playing and inspiring the troops to continue the advance until the enemy position was captured. Later, ordered to help carry the wounded to a Field Hospital he left he used the opportunity to recover the bagpipes he had been forced to abandon in no-man’s-land. He never returned. Declared missing his Victoria Cross would be a posthumous award. His body was not recovered until 1920.
Whereas the individual German soldier might spare the Piper known to be unarmed as they were, the machine gun was incapable of such discrimination and it took a terrible toll; of the around 2,500 Pipers who participated in the Great War some 570 were killed, including 60 on the Somme and 25 during the Gallipoli campaign, and more than 800 were wounded. It remained at the discretion of the Battalion Commander whether a Piper merely played the troops out of the trench or advanced alongside them with the instances of them doing the latter becoming less common as the war progressed.
German propaganda also portrayed the Piper as a purveyor of death, as the skeletal figure of plague years past luring the young to their doom in a bizarre musical Danse Macabre. By the time of the Second World War the Piper was no longer expected to play in zones of conflict. But that’s not to say it didn’t happen.
On 23 October 1942, each Company of the 51st Highland Regiment were led into battle by a Piper playing tunes that identified them to each other in the featureless desert and darkness of El Alamein. Casualties among them were high.
On 6 June 1944, on Sword Beach at Normandy during the D.Day landings Piper William Millin of the Queens Own Cameron Highlanders and personal Piper to Lord Lovat, Commanding Officer of 4th Commando, was ordered to pipe his men ashore. When he demurred stating that to do so was now against King’s regulations he was told – that’s English regulations we’re Scottish, it doesn’t apply. Millin did as ordered playing Highland Laddie and the Road to the Isles as the troops disembarked.
He also played as Lord Lovat’s 4th Commando marched across Pegasus Bridge to relieve the Ox and Bucks Light Infantry that had captured it the previous night in a daring airborne raid. He was later told by captured Germans that he was not fired upon because they thought he had gone mad.
The last time a Unit of the British Army was piped into an area of conflict was in July 1967, during the Aden Emergency when the Argyll and Sutherland Highlanders occupied and restored order in the Crater district of the city.
Tagged as: Miscellaneous, War
Share this post: