Posted on 24th February 2021
Prince Rupert of the Rhine first experienced war as a very young man fighting for the Dutch in their long struggle for independence from Imperial Spain where he displayed the courage, dash and no little recklessness for which he would become famous.
By 1638 he was engaged in the Thirty Years War for the Palatinate against the forces of the Holy Roman Empire and on 17 October that same year he was captured at the Battle of Vlotho and imprisoned in Linz Castle.
In a war notorious for its cruelties Rupert’s incarceration was comfortable to say the least but fearing that the nineteen year old Prince might be bored his friend the Earl of Arundel sent him a gift, a rare white hunting poodle to keep him company. Rupert was delighted with the gift and was rarely seen without his dog, which he named Boye, at his side.
Rupert was released from his confinement in late 1641 having promised to never again take up arms against the Holy Roman Emperor. He was to prove as good as his word but war was in his blood and aware of the looming crisis in England that saw his uncle King Charles in conflict with his Parliament he, along with Boye and his brother Prince Maurice set sail for England arriving in August, 1642.

Tall and handsome with his long flowing locks and flamboyant dress Rupert was a Cavalier for the ages whose military prowess would make him an idol of the Royalist cause and a figure of hate to his enemies. His victory at Powick Bridge in September, 1642, the first significant engagement of the Civil War when his cavalry swept all before them was the making of his legend, and with him that day as he would be throughout was his poodle, Boye.
Often he would carry Boye under his arm as he issued his orders and rallied his troops. It was even said that Boye accompanied his master into battle which wasn’t strictly true but was widely believed. No one was more hated by the Parliamentary forces that opposed the King than Prince Rupert, except possibly his dog. 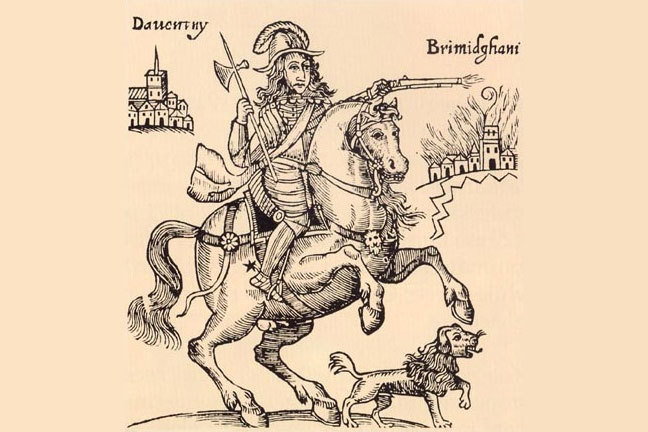 Boye featured prominently in Parliamentary propaganda which claimed it was a devil’s familiar imbued with magical powers. It may even have been Satan disguised as a dog.
Royalist satirists made great fun of the Puritan paranoia regarding the existence of demons and evil spirits and in particular their fear and dread of a poodle.
John Cleveland, for example, parodied Parliamentary propaganda claiming that Boye was Prince Rupert’s shape-shifting familiar, and that he visited the camps of the enemy at night and then reported back to his master their battle plans, that it would cock its leg whenever the word Puritan or the name John Pym was mentioned, and more frighteningly perhaps for those who chose to believe in such stories, and there were many, it could seek out Puritan treasure no matter how well it was hidden. The story was even circulated that Boye was in fact a beautiful Lapland lady who was Prince Rupert’s lover disguised for she was too beautiful for others to look upon - it was true because people had seen her.
Boye’s magical powers were so great that he was the reason Prince Rupert had never been wounded in battle. He could deflect cannon shot and catch musket balls with his teeth.
Rather than be dismissed as absurd these claims were believed and even elaborated upon to the great amusement of the Royalists. Playing upon these fears and with no little humour Boye was promoted to the rank of Major-General but his military career was to be a short one. 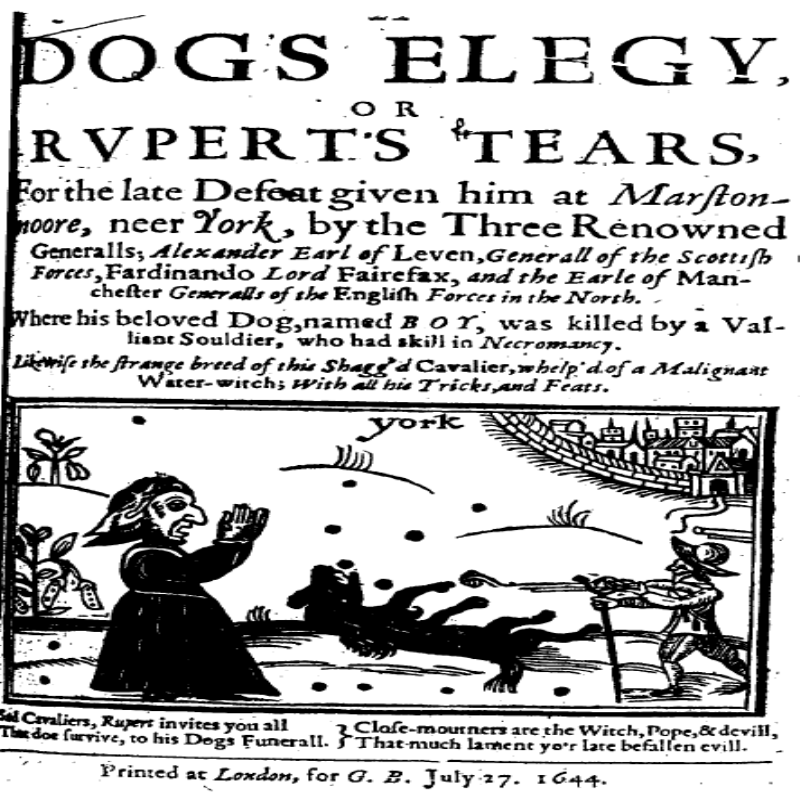 At the Battle of Marston Moor on 2 July 1644, he had slipped his leash and escaped camp to pursue his master and in the heat of the battle had become separated from Rupert and was killed, first speared then having his head brutally caved in. Seemingly a great deal of venom had been expended on his killing.
Prince Rupert’s feelings at the loss of his beloved Boye can only be guessed at but the Royal Princes were greatly upset as was the King’s wife, Henrietta Maria. Even the King who was rarely one to reveal his feelings expressed regret and may even have shed a tear. He had always taken great delight in having Boye upon his lap and feeding him choice cuts of beef from the Royal plate.
Such was Boye’s reputation that almost all Puritan and Parliamentary propaganda following their great victory at Marston Moor celebrated his death with woodcuts, posters and publications showing it laying dead upon its back speared and black even though Boye was white the colour of the Devil was black.
Tagged as: Tudor & Stuart
Share this post: