Posted on 21st January 2021
On 8 August 1588, Sir Francis Drake engaged the Spanish Armada at Gravelines having earlier used Fire-ships, the dreaded Hell-Burners crammed full of gunpowder and pitch to break their formation at Calais and force them back into the open sea. Smaller and more manoeuvrable than their larger Spanish opponents the English ships were now able to harry and harass the Armada throughout a frantic day of fighting that saw them close, fire their volleys, and withdraw before the Spanish could close and use their preferred tactic of boarding.
The Armada’s heavy guns were also slow to fire, in some cases as little as one round an hour, and the low trajectory of English fire also meant that many of their experienced gunners had been killed early in the battle slowing their rate of fire even further. 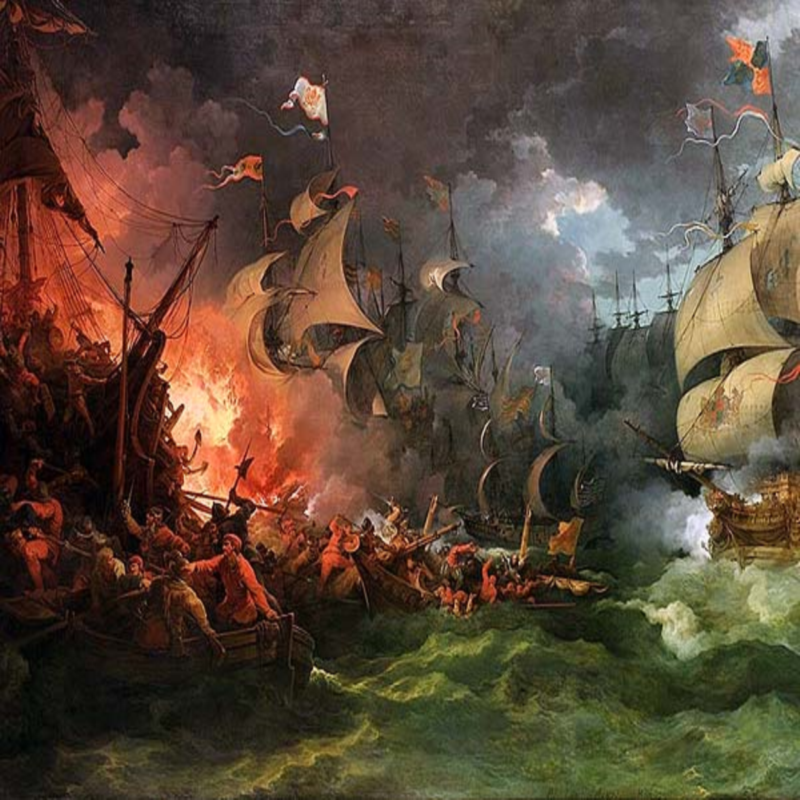 Harassed beyond endurance the Armada could now perceive its own vulnerability and so with the wind and tides in its favour it broke off the battle and withdrew.
Having lost ships the Spanish took advantage of the wind and the tides being in their favour to break off the battle. The Battle of Gravelines had been an undoubted English victory but not it appeared a decisive one. Its outcome however, had sown the seeds of doubt in the mind of the Armada’s commander, the Duke of Medina Sidonia.
As news of Sir Francis Drake’s victory filtered through to the English Court it was greeted with a sense of relief but one tinged with disappointment for the Armada had not been destroyed and the threat of invasion remained. Queen Elizabeth I, who often absented herself at times of crisis, would on this occasion with her throne and her very life at stake play the central role in the campaign. 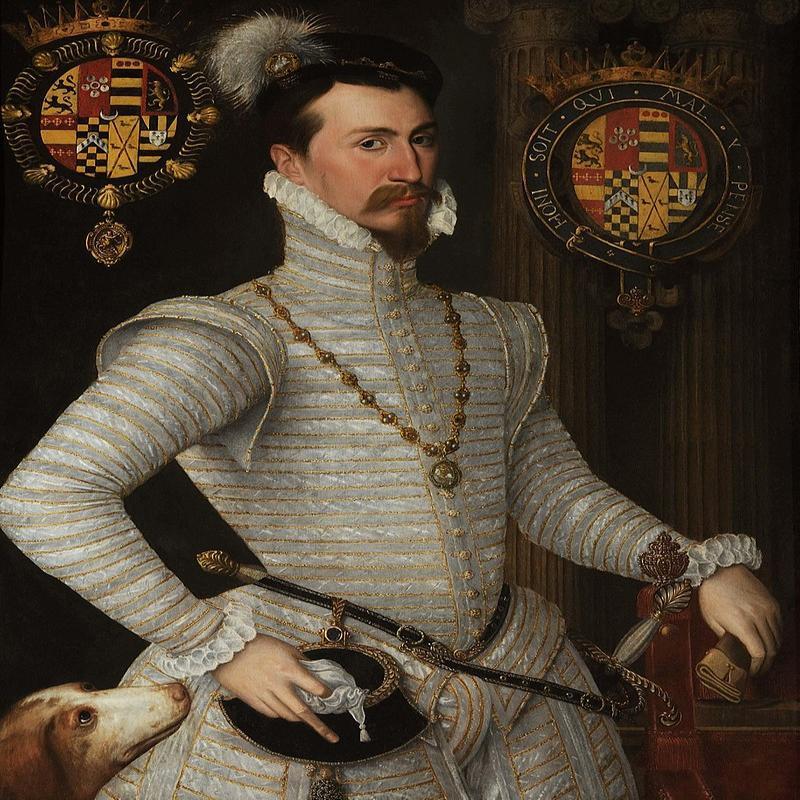 She was preparing to address her troops gathered at Tilbury - a rag-tag army of volunteers and those forced into service poorly trained and ill-equipped that in truth inspired little confidence. Likewise, its commander Robert Dudley, Earl of Leicester, the Queen’s old suitor was ill-considered as a General. He had not acquitted himself well during his campaign in the Netherlands and he was also a sick man but he understood the value of propaganda and it was he who had orchestrated the set-piece meeting at Tilbury.
Few thought that if the Armada was not beaten at sea the Spanish Army, the finest in Europe led by the much admired Duke of Parma could be beaten on land, and that to believe so was at best wishful thinking. But Elizabeth would not countenance such talk and exuded confidence in both her army and the Earl of Leicester, in public at least.
And so on the morning of 9 August in what was a perfectly choreographed affair, riding a white charger and dressed for war in a steel breastplate and with sword at her side she rode among and between her squadrons accompanied by Leicester, the Earl of Essex, and the Lord Marshall. Then as the men gathered round at a respectful distance Elizabeth rode forth from her entourage alone to address them: 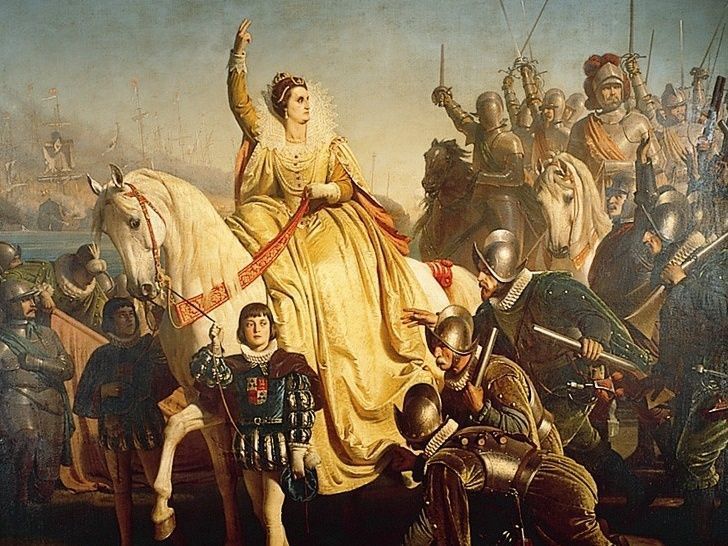 My loving people, we have been persuaded by some that are careful of our safety to take heed how we commit ourselves to armed multitudes, for fear of treachery; but I assure you I do not desire to live to distrust my faithful and loving people. Let tyrants fear. I have always so behaved myself, that under God, I have placed my chiefest strength and safeguard in the loyal hearts and goodwill of my subjects, and therefore I have come amongst you, as you see at this time, not for my recreation and disport, but being resolved in the midst of the heat of battle, to live and die amongst you all, to lay down for my God, and for my Kingdom, and my people, my honour and my blood, even in the dust.
I know I have the body of a weak and feeble woman, but I have the heart and stomach of a King, and a King of England too, and think foul scorn that Parma or Spain, or any prince of Europe, should dare to invade the borders of my realm, to which rather than dishonour shall grow by me, I myself will take up arms, I myself will be your general, judge, and rewarder of your virtues in the field.
I know already for your forwardness you have deserved rewards and crowns: and we do assure you on the word of a Prince, they shall be duly paid. In the meantime, my Lieutenant-General shall be in my stead, than whom never prince commanded a more noble or worthy subject, not doubting but by your obedience to my General, by your concord in the camp, and your valour in the field, we shall shortly have a famous victory over these enemies of my God, of my Kingdom, and of my people."
For those unable to hear her words pre-prepared texts were distributed to Officers to repeat to their men the following day and for priests to be read from the pulpit.
Aware she was a target for Catholic assassins it was a brave thing for Elizabeth to do but she understood the gravity of the situation. Although, to what extent the Queen’s Tilbury Address had stiffened the resolve of her army would never be put to the test.
The Battle of Gravelines the previous day had convinced the Duke of Medina Sidonia to abandon his plans to link up with the Duke of Parma’s Army in the Netherlands and sail instead for Spain via the tip of Scotland and the Irish Sea. But they were heading straight into some of the worst storms in living memory and it was not to be Sir Francis Drake who destroyed the Spanish Armada but a Protestant Wind as Galleons were swamped by the huge waves, ripped apart on the rocks, or forced to beach on the Irish coast where expecting a warm welcome from their co-religionists their crews were instead set upon, robbed and massacred.
Of the 120 ships in the Duke of Medina Sidonia’s command 55 were lost and 5,000 men drowned or murdered while those that limped home were in such a state of disrepair as to be rendered virtually useless and the men so diseased that many only had a short time to live.
The Earl of Leicester did not survive to glory in the destruction of the Spanish Armada dying on the 4 September, but Elizabeth did. If pleading her innocence to her half-sister Mary following accusations of treason thirty years earlier had been the defining moment of her life then her address to the army at Tilbury was the defining moment of her reign.
The Virgin Queen had become the Virgin Gloriana.
Tagged as: Monarchy, Tudor & Stuart, War, Women
Share this post: