Posted on 8th June 2021
The Rocky spine that runs the length of Italy and the hard ground and kind of soil it produces ensured that as much as two- thirds of the land lay uncultivated and as a result Rome was reliant upon overseas imports to sustain itself. Yet there lack of food never impinged upon their love of it.
For many centuries the breadbasket of the Empire was Egypt upon whom it was dependant for its grain supply. If grain supplies from Egypt reduced then food would become scarce and the people frantic, if the grain supply ceased altogether then Rome would starve.
Securing Egypt for Rome was the priority of the Republic and Empire alike for if the people starved then the blame fell upon those who ruled them. Fear of the mob and a ready supply of grain really did dominate Roman political life.
Grain, or corn, was the staple diet of the common people who made into a porridge called Pulsa flavoured with a variety of vegetables such as cabbage, parsnip, asparagus, peas and garlic which could be served either hot or cold. Garlic was in fact used to flavour most things in Ancient Rome giving the common people a distinctive and much remarked upon odour.
Pulsa which was eaten with a thick-bread sweetened with honey and often accompanied by a side dish of cheese was eaten most days.
Eggs and fish, particularly shellfish, were readily available in the local markets but there were no tomatoes, a product now so closely associated with Italy. It wasn’t an indigenous fruit and only became available as an import following Spain’s conquest of Mexico in the sixteenth century.
Being able to dine on meat, namely chicken or pork, was a rare treat for the common people and would invariably be cooked in olive oil.
Many Romans ate from commercial outlets that sold ready-made cakes and pastries and these early takeaways common throughout the city. 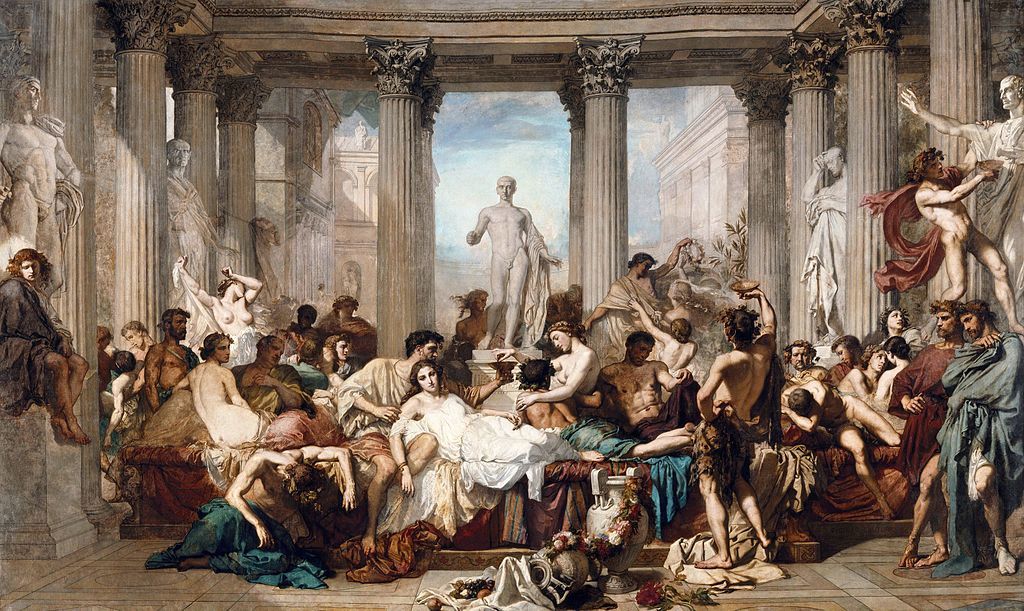 Dining out was a popular pastime and Rome was a city of many restaurants though not perhaps as we would recognise them now being places of raucous entertainment with gambling tables, dancing girls and as much sex on the menu as there was food.
Romans had a great love of wine which the better-off would drink throughout the day, though rarely taken neat but mixed with water. For most Romans wine remained a luxury however, and they instead placed great emphasis on the quality of their water which they would flavour with honey and fruits. Although a cheap wine made from acetum, similar to vinegar and known as Pasca was widely available.
Beer and mead though commonly consumed in the northern provinces of the Empire were virtually unknown in Rome itself, neither did they drink milk believing it unclean coming as it did from the procreative organs of animals.
The majority of Romans lived in tenement blocks sometimes five storeys high and the cooking arrangements would be communal and often situated in the entrance to the building with most food cooked on an open hearth either by means of cauldrons suspended from chains or cooking vessels set on a gridiron with a circular domed oven used for the cooking of bread and pastries.
That the cooking was done al fresco was also a safety measure with fire being a constant fear of those living cheek-by-jowl in cramped often wooden tenements.
Food preservation especially in the hot summer months was always difficult. Meat and fish would be subjected to smoking, salting and pickling but it was a delicate process and food poisoning was commonplace.
Romans whether rich or poor generally ate only one proper meal a day, the Cena, which for the common people would be around midday and for the more affluent in the evening, a time of day when they could dine at their leisure.
Unlike the poor who would eat sitting down or even on their feet at the same time as they went about their work the rich ate lying upon sofas and comfortable cushions with being able to doso a sign of their status.
Traditionally there were three courses the first of which would have been of eggs, shellfish, and raw vegetables followed by the main course, the Prima Mensa, of cooked meats and vegetables in particular mushrooms. The Secunda Mensa or what we would consider desert would consist of fruits pears, apples, dates and sweet pastries.
Oysters were considered a great luxury and would be served as affirmation of one’s wealth and social standing. Dormice stuffed with herbs were also very popular though more as a treat than a luxury.
As they had no knives and forks they would eat with their fingers though they had spoons for the eating of soup often with a pointed end to extract shellfish and snails.
In Rome what you ate was indicative of your households wealth status, and an always a sociable people the quality of your food and dining arrangements needed to be shared and made known to one’s peers.
But the richer you were the more vulnerable you became and anyone of prominence would out of fear of poisoning, natural or otherwise, have a slave to taste both their food and their wine.
It is perhaps ironic that a perfunctory act of necessity needing to be shared for reasons of social advancement should have been fraught with such danger. A fear that unlike the wine was not good for ones digestion.
Tagged as: Ancient & Medieval
Share this post: