Posted on 11th February 2021
The Romans first occupied Judea in 63 BC and it was to remain a province of the Roman Empire for the next 350 years yet few of her conquered territories was ever as fractious and this despite many Jews being happy to co-operate with their occupiers and prosper under their rule. Others however were determined to resist, the problem was that they disagreed with each other more than they ever disagreed with the Romans.
An uneasy occupation was made worse by the contempt the Roman’s had for those they conquered especially a people who not only thought highly of themselves but had the arrogance to believe they worshipped the one true God. The indignities they suffered at Roman hands were manifest including soldiers exposing themselves at Jewish Religious Festivals and mocking those leaving the Jewish Temple.. But the major Roman preoccupation as always was the collecting of taxes. To help facilitate the process of asset stripping, at which the Romans excelled, they co-opted the wealthier and most respected members of Jewish society to do their dirty work for them appointing the Priesthood from among their more trusted acolytes and collaborators.
In Jerusalem the soon to depart Roman Procurator Gellius Florus, had entered the Jewish Temple and helped himself to those items he thought of value declaring them gifts for the Emperor when all knew it was his own pockets he was lining. It trampled on Jewish sensibilities and tensions rose as Florus was abused and jeered at in the streets. Roman officials did not appreciate being ridiculed and the small garrison in Jerusalem was reinforced before being used to round up and execute those prominent Jews known to oppose Roman rule. 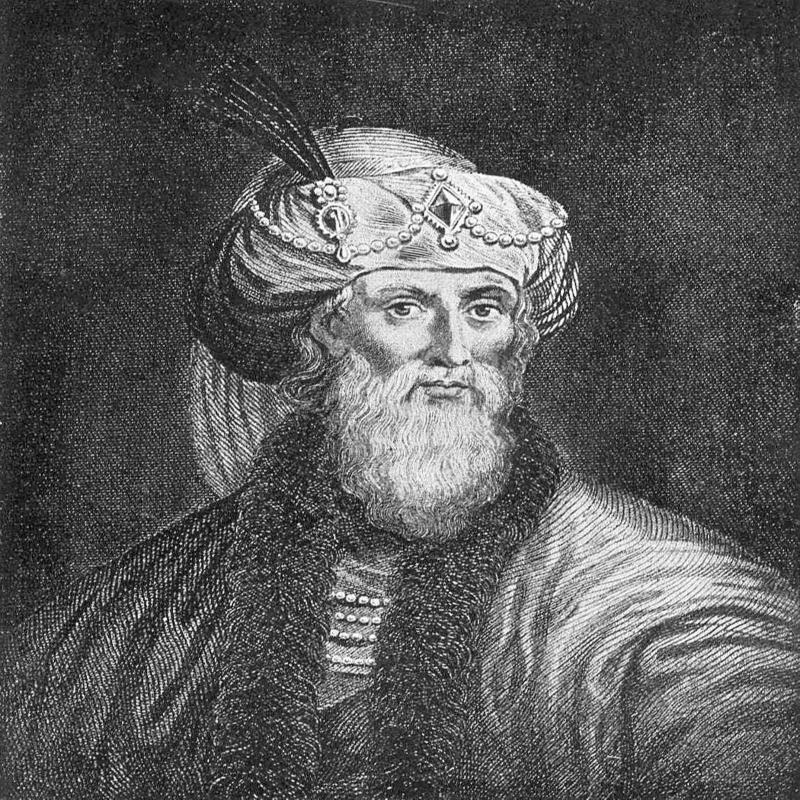 It was the final straw for the people of Jerusalem who rose up and attacked the garrison forcing it to flee. But this was not the first sign of trouble. According to the Jewish historian Josephus, who was to change sides during the conflict and later live in Rome, the revolt actually began in the region of Caesaria provoked not by Romans but Greeks who were seen disrespectfully sacrificing birds outside a Synagogue during an important religious ceremony; but then he may have been trying to deflect the blame away from his new friends.
Violence was commonplace and it soon became unsafe for Roman citizens to leave their homes. The attacks were random and uncoordinated however, but in Elianza ben Simon, also known as Hariana, the rebels were soon to find a leader.
As the violence spread the Jewish puppet King Agrippa II, perhaps knowing his people only too well fled to the Roman camp. The Roman Governor of nearby Syria, Cestius Gallus, faced by a similar revolt decided to quell it by force but his attempt to do so ended disastrously when his legions were routed at the Battle of Beth Horon. It now dawned on the Romans that this was more than a little local difficulty and as they scrambled around for a response the rebellion quickly spread.
The Emperor Nero, for whom the running of his Empire was a distraction from his more artistic pursuits and an inconvenience dismissed Gallus and appointed General Vespasian to crush the revolt. For Vespasian who had previously been in disgrace for failing to stay awake during one of Nero’s interminable performances it was an opportunity to win back the Emperor’s favour and he was determined to grasp it with both hands.

With his son Titus and an army of 60,000 men, many of whom were Jews loyal to Agrippa he began his campaign by crushing the revolt in the north. In this initial stage of the campaign he was largely unopposed as the local Jews were in dispute with each other, and most of the towns surrendered without a fight.
With their land conquered many of the northern leaders openly discussed coming to a negotiated settlement but aware of this the Sicarii (s0-named for the daggers they kept concealed on their person) intercepted their convoy as it fled south and murdered them.
The fanatical Sicarii would settle for nothing less than a Judea free would kill anyone who advocated otherwise. The Sicarii, along with the more political Zealots who took their inspiration from the Talmud and religious texts had no doubts as to the righteousness of their cause and believed that any means were justified in the pursuit of Jewish political and religious freedom. Indeed, it has been suggested by some that the Sicarii were a splinter group of the Zealots who believed that they had been compromised by their pursuit of power and not just freedom.
Even so, despite the fanaticism of the Sicarii and the Zealots the rebellion in Galilee was easily crushed with Josephus suggesting that as many as 100,000 Jews were killed or sold into slavery. In the meantime, events had taken a dramatic turn back in Rome.
In AD 68, the Emperor Nero had been forced to flee the city and commit suicide. His successor, the veteran General Galba reigned only a few months before his attempt to root out corruption and restore discipline in the army led to his being murdered by his own troops.
Learning of events in the capital the ambitious Vespasian, encouraged to seize the throne for himself assigned to his son Titus the task of crushing the Jews and set off for Rome..
In the meantime, the Romans continued their advance on Jerusalem almost unopposed as the Jews were still too busy killing each other. By the summer of AD 69 the Romans stood outside the city walls and Jerusalem was effectively under siege.
The Jewish leadership had been expecting this and had made provision for a long siege with arms stashed and food plentiful. Learning of this the Zealots destroyed the food that had been stockpiled believing that it undermined the peoples’ willingness to fight. It was an act of madness and one they would soon come to regret for Titus was methodical in his approach to warfare and was in no rush to storm the city.
On 21 December, AD 69, Vespasian was made Emperor of Rome following the defeat of his rival Vitellius in battle the previous day. When the news reached Titus he was elated – he would sack Jerusalem for the greater glory of his father, his family, and of Rome.
As the Romans lay siege to Jerusalem the people within starved. But as they sought any means of sustenance merely to survive a murderous and suicidal civil war was taking place around them. Those who tried to flee the city would be killed as traitors by the Zealots or Sicarii while those who managed to were killed as rebels by the Romans. 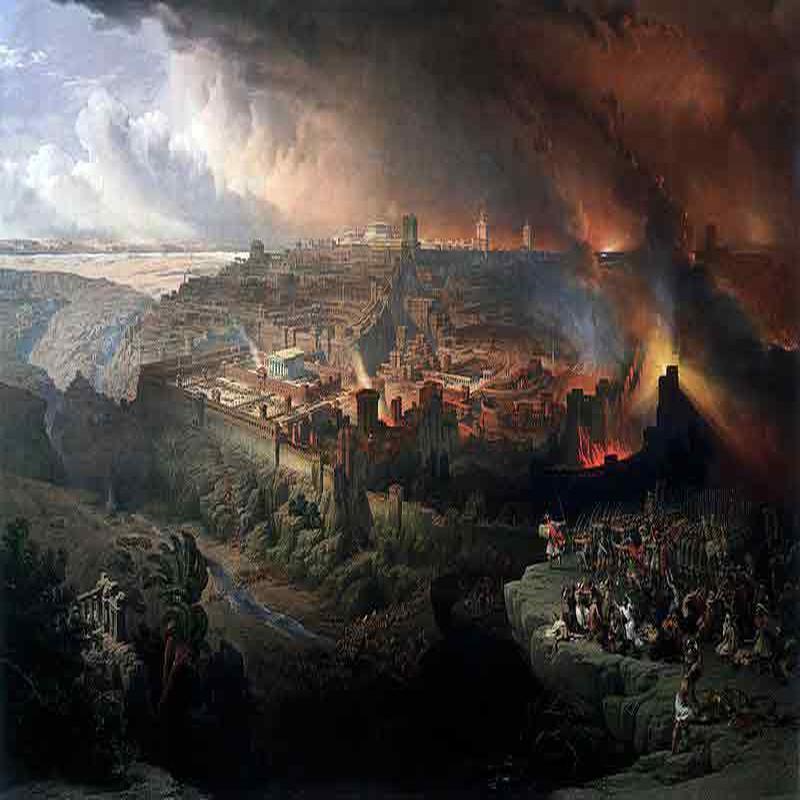 By the summer of AD 70, The Romans were making incursions into Jerusalem but they were made to pay a heavy price as the Jews fought ferociously for every yard of their city.
But though the fighting was fierce there was little organised defence for when they weren’t distracted fighting the Romans the factions within Jerusalem continued to battle among themselves and it wasn’t until the fall of Jerusalem appeared imminent that the two Zealot leaders Elia ben Simon and John of Gischala,and the Sicarii leader Simon bar Giora, at last buried their differences and joined forces. But by then it was too late as the walls of the city had already been breached and Roman soldiers were flooding into its streets. In these last desperate hours all the people of Jerusalem took up arms both women and children as well as men b often armed only with sticks and stones it was less like a battle than it was a massacre.
On 29 July, the Jewish Temple, the Holy Shrine of the Israelites, was ransacked and destroyed despite Titus ordering its preservation. It was never to be rebuilt.
Simon bar Giora, who had led the defence of the Temple, died in the fighting. John of Gischala escaped and was to surrender himself to Agrippa II and spend the rest of his life in prison. Those Sicarii who escaped in those frantic last hours of fighting fled to the fortress of Masada.
Masada was a formidable structure that stood atop an 1800 foot high plateau and it was to be here that the last great drama of the Jewish Revolt was to be played out, but not just yet. First Titus was to ruthlessly re-impose Roman rule.
Those captured who were believed to have been involved in the revolt were executed and their families sold into slavery. The Jews would also have to pay a huge indemnity for the cost of the war as well as seeing the centre of their cultural and religious life destroyed.
Laden with booty and slaves Titus now returned to Rome in triumph, the worthy son to a new Emperor whom he would succeed in AD 79.
In AD 72, the new Governor of Judea, Lucius Flavius Silva decided to eradicate the last bolt-hole of resistance to Roman rule. He marched with his Legions on Masada.
The Jews in Masada did nothing to impede the Roman advance instead occupying, themselves with attacking nearby towns they thought had collaborated with the Romans killing many hundreds of their own people in the process.
The Fortress of Masada was commanded by Eleazor ben Ya’ir (who many believe to have been Eleazor ben Simon). Those within the fortress were thought to have numbered around 950, mostly women and children.
The climb to Masada was steep and arduous and the defenders had blocked the paths ensuring that any advance was undertaken under a hail of missiles which despite the Romans adoption of the testudo, or shield shell for protection, caused many casualties.
So the Romans instead would scale ramparts of their own construction to reach the fortress.
As such, the siege was to last for two months even though the defenders were slight in number. In the meantime, the Sicarii were able to repulse a number of half-hearted assaults but they knew that a full-scale attack with all the forces at the Romans disposal was imminent. Rather than permit the Romans the triumph of taking Masada by force of arms Eleazor ben Ya’ir gathered the people together and ordered that they must now take their own lives. The mass-suicide would show the Romans that they would rather die than acknowledge defeat and witness the elimination of their religion.
But suicide is anathema to Judaism and so to overcome this difficulty Eliazer ben Ya’ir had the people draw lots to see who would kill whom.
When the Romans advanced on Masada they met no resistance.
On entering the fortress they found just 2 women and 5 children alive and these they sold into slavery.
The Jewish attempt to throw off the yoke of Roman rule had failed, but it was not to be their last attempt to do so. In AD 131, the Emperor Hadrian visited the ruins of Jerusalem and decided that the best thing for Judea would be for it to be Romanised.
The Jews resisted for four long, bloody, years but by the end of the Second Roman-Jewish War, Hadrian had completed the work begun by Vespasian and Titus. The Jewish Sacred Scroll he had ceremonially burned on Temple Mount, their Scholars he had executed. He destroyed their towns, razed their villages to the ground, and had some 500,00 Jews killed or sold into slavery. Judea was renamed Palaestinia and Jerusalem Aelia Capitolina. By the time the war ended in AD 136, the Jews no longer had a homeland - it was the beginning of the Jewish diaspora.
Tagged as: Ancient & Medieval
Share this post: