Posted on 24th March 2021
Few names are more instantly recognisable than Spartacus, the runaway slave and gladiator who for two years held at bay the legions of the Roman Republic, then the most powerful State in the world. He defeated time and time again the armies sent to crush him and gave hope to thousands of the enslaved and dispossessed where none had previously existed - this is his story.
He was born around 107 BC the exact date remains a mystery, in Thrace or modern day Bulgaria. He was believed to have served as a soldier in the Roman Army before deserting but recaptured he was sold into slavery and put to work in the salt mines of Greece.
The historian Florus wrote of him: "He was a deserter, a robber and a thief, who later because of his great strength became a gladiator."
It was said he married a raven haired beauty whom the Romans described as a sorceress and seductress who dabbled in the dark arts and bewitched those who came into her presence.
Some also believed him to have been an educated man to the extent that Plutarch insisted that he must have been of Hellenic extraction and not a Thracian at all. It was even rumoured that he was of noble blood. In 73 BC, he was sold to the Gladiatorial School of Lentulus Batialus near Capua in Italy. 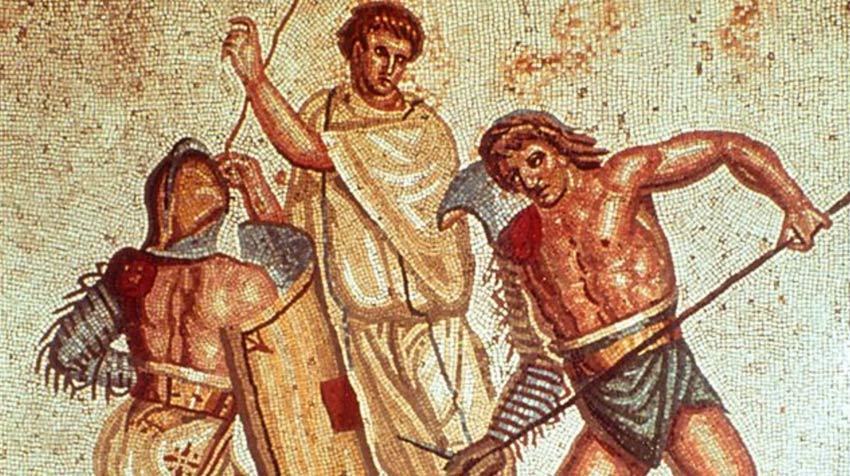 To those who owned them a gladiator could prove a lucrative investment and so they were well fed and cared for though the training regime would be brutal and harsh.
Not long after his arrival Spartacus and around 70 other gladiators stole knives from the kitchen, attacked their guards, and escaped into the surrounding countryside. The incident caused little stir in Rome, after all slave revolts were not uncommon and were more often than not easily suppressed. Still, the ratio of slaves to citizens in Italy as a whole was extremely high and in common with most slave societies the Romans lived in constant fear of the enemy in their midst. And Spartacus was no ordinary slave. Not only was he a skilled gladiator with military experience but also an intelligent and astute man. His rebellion also coincided with the bulk of the Roman Army being abroad.
The highly ambitious Pompey Magnus was away fighting with his legions in Spain while Rome's leading General Lucullus, was in Asia-Minor leading his troops against that perennial thorn in the Roman’s side, the Parthian King Mithridaite.
Spartacus was quick to exploit the situation and even though he had few men to begin with he soon came to dominate the area around Capua and runaway slaves and poor labourers began to flock to his banner. In time this was to cause him a very considerable problem for most of these people were women, children and the elderly while many of the able-bodied men had never been trained to fight. Regardless of this and despite the fact that all of these people had to be fed and found shelter, he turned no one away.
It has been estimated that as many as 100,000 runaway slaves and poor gathered beneath his banner and they were to have their revenge as they destroyed and looted the villas of the rich but Spartacus wanted more than this. He had a plan - he was going to take them out of Italy and to freedom.
With Spartacus acting with impunity around Capua the Senate in Rome was forced to act and they despatched an army of 3,000 men under the command of the ambitious young Praetor Clodius to crush the rebellion. It was not considered a difficult task, these were just slaves after all but Clodius was not only arrogant and complacent he was to prove incompetent.He besieged Spartacus on the hills and woods around Mount Vesuvius but had not even bothered to fortify his camp. Spartacus, noticing this had his men lower themselves from the cliff tops near Clodius's camp from vines. They then attacked in the dead of night. The ensuing battle was a rout and Clodius's army utterly destroyed. Following his unexpected victoy even more people flocked to Spartacus.
Despite this setback the Senate remained undeterred and continued to send armies south to crush the rebellion and Spartacus continued to defeat them both by ambush and in open battle.
After destroying the army of Varinius in an orgy of celebration he made the prisoners fight as gladiators and then crucified the survivors but the joy of triumph, treasure and revenge did not deflect him from his intention to escape Italy and as such he began to march his army north towards Gaul.But this was to cause a split in his camp.
Crixtus, a Gaul himself, and effective Second-in-Command to Spartacus was lured by the prospect of plunder and wanted to attack Rome itself. Spartacus would not hear of it, he had no desire to conquer Rome but merely escape its malignant embrace.
Crixtus, unwilling to accept the decision, abandoned the camp taking some 30,000 men with him. fThis was a serious blow to Spartacus but he nonetheless continued his march north.
As he approached Cisalpine Gaul the Governor of the Region, Caius Cassius tried to block his path with 10,000 men but just as all those before him he was soundly defeated. The route to Gaul and freedom now lay open but then to everyone's surprise Spartacus suddenly retreated south. It has been suggested that he was forced to remain in Italy by his people who feared to leave and much like Crixtus wanted more plunder. After all, they had defeated every Roman Army sent against them and the country lay open and undefended with a great many plush villas just waiting to be ransacked.
The Senate in Rome had long since ceased to be complacent however, and had recalled four veteran Legions from Spain.
Also, unknown to the rebels Crixtus had been intercepted near Apulia by two Legions led by Quintus Arias and killed along with most of his men. Meanwhile, Spartacus was crushing the army of Cornelius Lentullus. 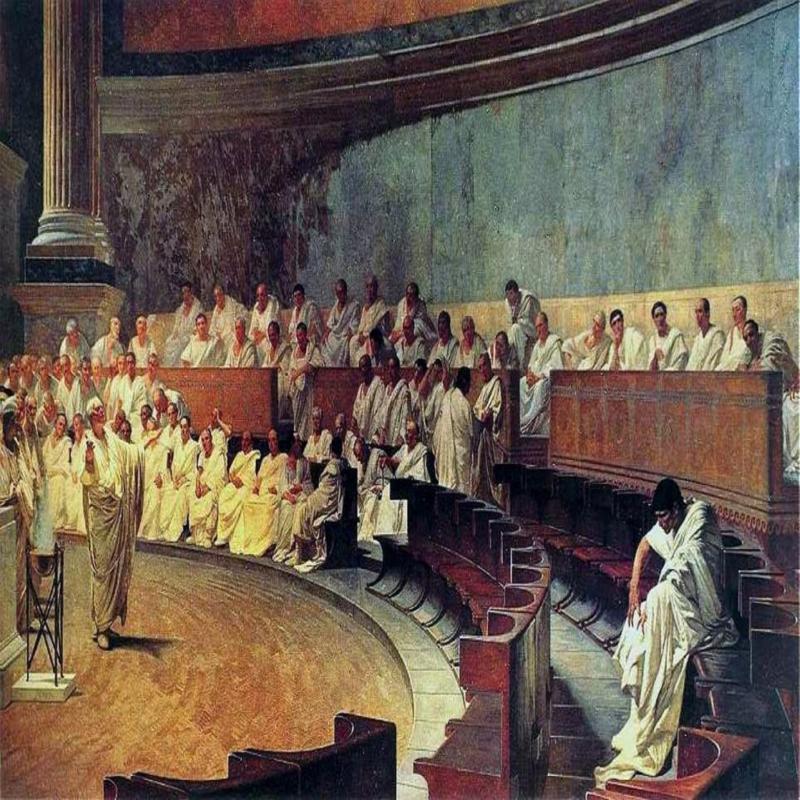 Following the defeat of Crixtus the Senate determined to crush Spartacus once and for all gave command of the Roman Army to Marcus Licinius Crassus who had volunteered himself for the job. He was the wealthiest man in Rome with an estimated fortune of 200,000,000 sesterci and his great wealth brought him considerable political influence but he still lacked credibility as a leader. In a society where glory and honour was everything and could not be bought but had to be won, he needed a military victory.
Extremely ambitious he wished for nothing less than the award of a Triumph, or the right to parade through the streets of Rome in a golden chariot with columns of bedraggled and manacled slaves following in his wake. He was also supremely confident of victory but upon his first contact with Spartacus half of his army turned and run. Forced to retreat as a result, he had been humiliated, and so to restore order to the ranks he applied an old custom known as decimation. The most cowardly Legion was singled out and its men forced to draw lots to see who among them was to be the one of every ten executed.
His army reinforced at his own expense was now more than 40,000 strong and he continued to pursue Spartacus south but it was no disorganised chase through the countryside, Spartacus knew exactly where he was heading - the port of Brundisium where he had arranged with Cillian Pirates for a fleet of ships to take his people across the Straits of Messina to Sicily. But they failed to turn up.
Devastated by the turn of events he could do nothing else but beat a hasty retreat further and further south until he had nowhere else to go. Finally he established camp at Rhegium in Calabria where he was soon besieged by Crassus. 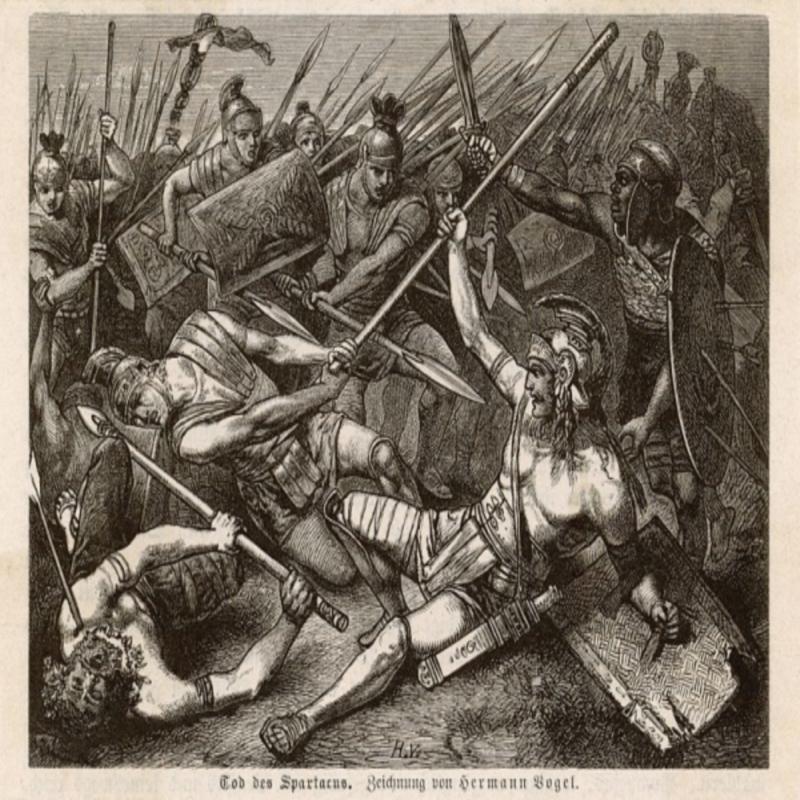 Spartacus's people may have been weighed down with plunder but they had no food and they soon began to starve. He also knew that Pompey had returned from Spain with his Legions and was on his way south and that another army was advancing from the east. He had no choice but to give battle.
Spartacus and his men attacked with the fury of the desperate that saw them break through Crassus's siege lines and into open country but once there all sense of cohesion broke down as each man began to look to himself. Pursued by the more disciplined Romans they were cut down.
Plutarch describes what happened next:
"Finally, after his companions had taken flight Spartacus, surrounded by a multitude of foes, continued to defend himself until he was cut down."
His body was never found but some 6,000 slaves who had escaped the slaughter and fled north were intercepted by Pompey and defeated. Much to the fury of Crassus it was Pompey who now received the plaudits for bringing the slave revolt to an end, even though he had never participated in any of the battles. He was also awarded a Triumph for his exploits in Spain. Crassus was denied the same by a Senate who declared that fighting slaves wasn't worthy of one. 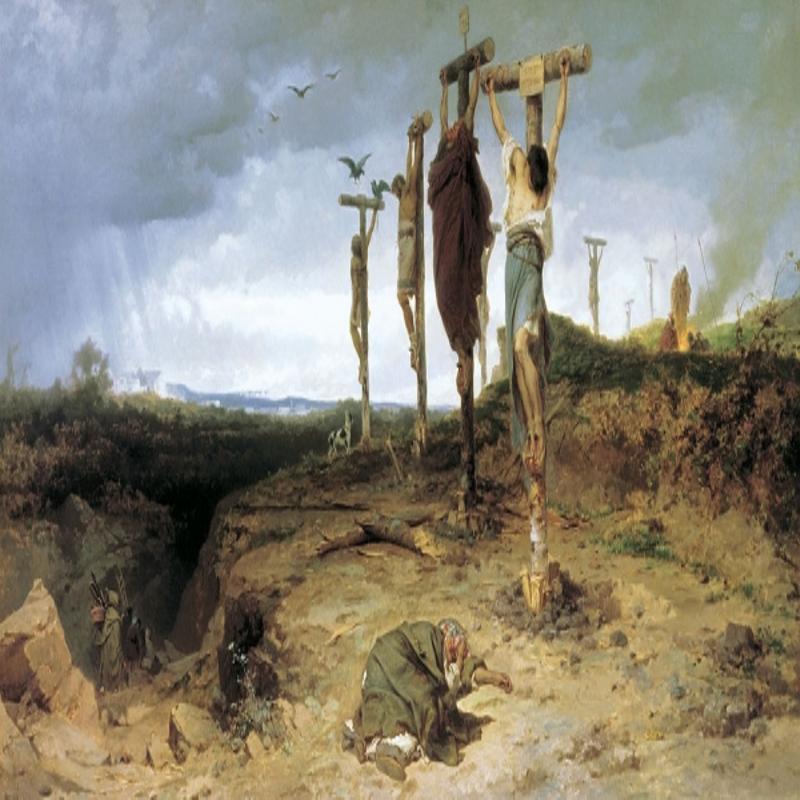 In his fury Crassus had 10,000 slaves crucified along the Appian Way leading to Rome where their corpses remained hanging for many years.
Crassus still longed for a Triumph however, so he could match the military exploits of his partners in the new ruling triumvirate, Pompey Magnus and Julius Caesar and so in 53 BC he raised and equipped an army at his own expense and invaded Parthia but the campaign would end badly. Defeated and besieged he visited the Parthian camp in the hope of being able to buy himself out of a parlous situation but instead he was taken prisoner and in recognition of his well known love of money they poured molten gold down his throat before cutting off his head.
Spartacus had led the most serious slave rebellion ever to threaten Rome, but it was never an ideological or anti-slavery rebellion. He had merely sought freedom for himself and those he led. He also never sought plunder and was as much undone by the greed and avarice of those within his own camp as he was by the Roman Army.
Yet he fought a two year battle for freedom with a largely untrained army weighed down by so many women, children, the old and the sick deep within the beating heart of the soon to be Roman Empire - it was a remarkable achievement.
Tagged as: Ancient & Medieval
Share this post: