Sultana: Tragedy on the Mississippi

Posted on 19th September 2021
As the American Civil War drew to its close the Mississippi Steamboat Sultana was commissioned to return recently liberated Union prisoners-of-war north to Illinois.
In April, 1865, under the command of the experienced Riverboat Captain John C Mason she left New Orleans with a cargo of livestock bound for Vicksburg where the freed prisoners eagerly awaited her arrival.
On the journey to Vicksburg the Sultana had encountered problems with one of its boilers and upon docking Mason had ordered that a hasty repair be done. But he could see no reason for the journey to be delayed for any length of time.
Many of the soldiers due for transportation had suffered terribly in the Southern prisoner-of-war camps where threadbare shelters, poor sanitation, scant medical care and a scarcity of food had taken its toll. Tens of thousands had already died and many had only just been released from the notorious Camp at Andersonville. They were sick with malnutrition and disease and there were a great many stretchers waiting at the quayside. 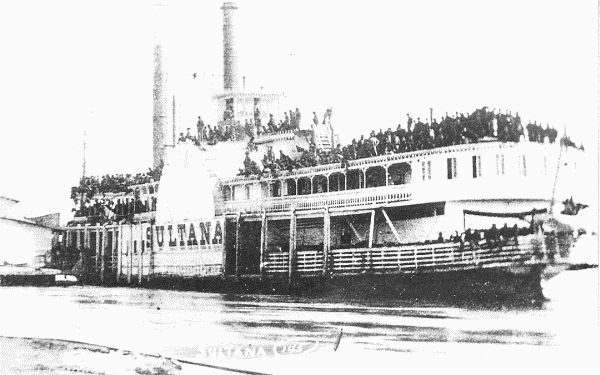 The Sultana only had capacity for 375 passengers and crew so space aboard the boat should have been limited but such was the desperation of the prisoners to get home that they were willing to bribe the crew to get a berth and fights even broke out at the dockside which resulted in order having to be forcibly restored.
Captain Mason, who was being paid a rate of $5 per passenger, did little to control numbers and by the time the Sultana left Vicksburg she was crammed to the rafters and it was standing room only and the small Mississippi Paddle Steamer had more than 2,400 people on board.
By 2.00 am on the morning of 26 April, the Sultana was some 9 miles north of Memphis, Tennessee, when a huge explosion rent the still night air. The Sultana had ignited and was quickly being consumed by fire. The two smokestacks trembled for a moment before crashing onto the deck crushing many dozens of men who were too tightly packed to move out of the way in time. 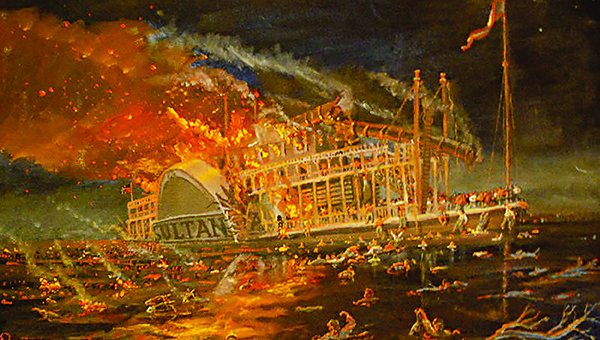 Those near the boilers had been incinerated whilst others below decks had been crushed by falling girders, drowned by the in-rushing water, or were trapped and slowly burned to death. Many men on the higher decks were thrown into the swirling, icy cold Mississippi River. Major Robert Talkington of the 9th Indiana Cavalry later recalled:
“The steam was so hot I could scarcely breathe. I groped my way out of the place as quick as I could. It took me a moment to realise what had happened. A boiler had blown up. Within a few minutes the ship caught fire. When the crowd fully realised what had happened men began to jump in the water by the hundreds."
What was left of the Sultana continued to career out of control down the fast-flowing Mississippi as those survivors in the water clung to every available piece of wreckage or desperately grabbed for the branches and shrubbery on the, riverbank. The first rescue boat did not arrive for over an hour by which time many had already drowned or had died of hypothermia.
Anna Annis, the wife of Lt Harvey Annis was clinging onto a part of the ships rudder as she watched her husband still carrying their seven year old daughter in his arms swept away by the current never to be seen again, presumed drowned. Anna was later rescued.
By the end of an anxious and confused night around 800 people had been plucked alive from the water but many of these had been horribly burned and more than 300 were later to die in hospital.
The official death toll from the Sultana disaster was 1,547 but it is widely accepted that it was probably nearer 1,900 one of whom was Captain Mason.
The wreckage of the Sultana was to continue on its way for many miles until finally foundering near Mound City in Arkansas. The grim task of recovering the bodies began almost immediately but there were no survivors found aboard.
The Sultana Tragedy was largely overlooked by a press absorbed with the death of President Lincoln’s assassin John Wilkes Booth and the surrender of the last significant Confederate force still under arms Joseph E Johnstone's Army of the Tennessee.
After four years of bloody civil war it seemed few cared much that another thousand or so had died.
The Official Inquiry into the disaster blamed it on an exploding boiler and Captain Mason's decision to sail full-steam ahead despite being aware that the boilers were not working as they should. It was declared to be a tragic accident but the truth may have been a little less palatable.
In 1888, William Streetor, a resident of St Louis in Missouri reported that Robert Louden, a Confederate Spy and Saboteur had confessed to being responsible for the sinking of the Sultana as he lay dying of Yellow Fever in 1867.
Louden had worked for the Confederate Intelligence Service and had been responsible for several of the more than 60 Union Steamships destroyed on the Mississippi during the war.
He had been in Memphis the night the Sultana had docked and as far as he was concerned the war was not as yet over. Despite the surrender of Robert E Lee's Army of North Virginia at Appomatox Court House the Confederacy still had armies in the field and its President Jefferson Davis had declared that the fight would go on.
Besides being a Southern patriot Louden also had every reason to personally hate the Yankees. He had himself been a prisoner-of-war and endured great hardship while both his father and wife had been arrested for being Southern sympathisers.
He had vowed vengeance against the damned Yankee should he get the opportunity, and now he had that opportunity.
Louden had been a close friend of Thomas Courtenay, the man who had invented the coal torpedo. The coal torpedo was a lump of cast iron with the centre hacked out and packed with explosives in the shape of a piece of coal. Loudon was very familiar with these and had used them many times.
Among the men who were re-stocking the Sultana with coal that night were some of Louden's agents who smuggled him aboard with the bomb on his person. He then covered it in coal dust and placed it in the bucket near the main boiler knowing that it would be fired up in the next few hours.
A death bed confession is considered to be very powerful evidence and if true then Robert Louden had committed one final act of terrible vengeance against the Yankee he hated so much.
But it counted for little in the end. The Confederacy was beaten and within two years of those who had been the victims of his last outrageous act of defiance he too was dead.
Tagged as: Miscellaneous
Share this post: