The Verney's: A Civil War Family

Posted on 9th June 2021
Civil War is the worst kind of conflict it tears apart society as one time friends become enemies, brother is turned against brother and father against son. It is fought between neighbours and within families One such family, were the Verney’s.
Sir Edmund Verney, the patriarch of a large and respected Buckinghamshire gentry family was in almost every respect unremarkable for a man of his class. He was educated in the normal way by private tutors before attending university where he was taught to be obedient, true to his word, to serve his King and to believe in God. In 1606, he married the daughter of a neighbouring gentry family Margaret Denton by whom he sired 10 children. He was knighted by King James I in 1612 and was appointed a Gentleman of the Privy Chamber.
One of his duties was to take care of the pale-faced, sickly and painfully shy Charles, Duke of York the second son of the King. The always fragile, accident prone Charles certainly needed taking care of and Sir Edmund Verney was just the man to do it. He was undemonstrative, loyal, devoted and hard working. He studiously went about his business while at the same time exuding authority and the young Prince trusted him. 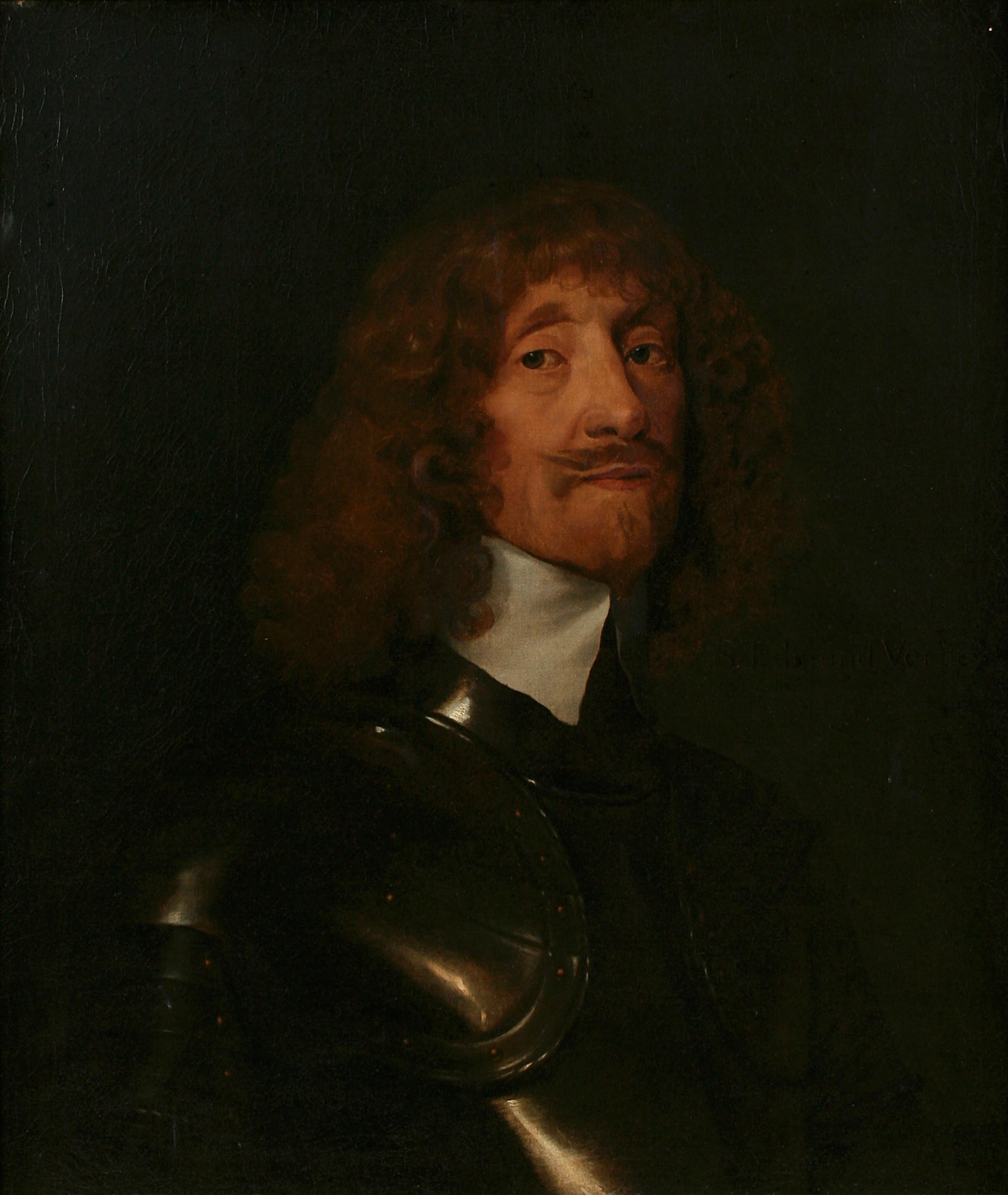 Sir Edmund’s home life was not however, trouble free. He was possessed of little financial acumen and throughout his life was reckless with money and by the 1620’s was already heavily in debt despite the many rewards he reaped through his devotion to the Royal Family. He was to remain so for the rest of his life but never to the point of bankruptcy or worse.
In 1623, he accompanied the young Charles and the Duke of Buckingham to Spain on a madcap scheme to woo the Spanish Infanta. They travelled through the country on horseback using false names and wearing fake moustaches and beards. Sir Edmund felt ill-at-ease with such nonsense and his often frayed temper snapped when he witnessed a Catholic Priest giving the Last Rites to a dying member of their entourage. He dragged the priest away and punched him to the ground. It was an ignominious end to a ridiculous fiasco. The party soon after returned home empty-handed their reputations hardly enhanced by such shenanigans.
In 1624, Sir Edmund was elected the Member of Parliament for Buckingham and the following year appointed Knight Marshal, or the man responsible for running the Royal Court. By now the Prince Charles had been crowned King Charles I and Sir Edmund, was to be his devoted servant. His loyalty was to be well rewarded and he benefited from the sale of monopolies and was awarded a Court Pension which went some way to alleviating his financial difficulties.
Despite his devotion, Sir Edmund was not in agreement with his King on many issues, particularly his religious policy. He was a Puritan and though by no means a fanatical one he shared the same concerns as others of his persuasion. He feared the return of Roman Catholicism and thought he could see its increasing influence within the Royal Court. The King, he believed, was naively permitting this to happen. He agreed, along with many others, that the King was being led astray by evil councillors.
By 1640, after 11 years of personal rule without recourse to Parliament, Charles’s regime was beginning to unravel. His attempt to impose the Common Book of Prayer and Archbishop of Canterbury William Laud’s religious reforms on Scotland had been violently rejected by the Presbyterian Kirk. Charles stubbornly refused to budge on the issue and tried to impose his reforms by force, the trouble was he did not have the army with which to do so. After an embarrassingly one-sided skirmish a Scots Army invaded England and captured Newcastle cutting off the coal supply to London.
Despite the fractious relationship Charles had with his Parliament he had little choice now but to recall it. But they soon proved to be no less recalcitrant than they had before,, and under the leadership of John Pym they passed, though only by 6 votes and with 200 abstentions, the Grand Remonstrance, a list of grievances against Charles’s personal rule that they wished addressed before they would provide the funds for the King to raise and equip an army.
In the autumn Ireland rose in revolt and reports soon reached England of Protestants being murdered in Ulster; worse still the rebels claimed to be acting in the King’s name. Charles desperately needed his Parliaments support but even so refused to compromise on his right to rule as he saw fit. Pym was no less determined to clip the King’s wings and make him more of a Constitutional Monarch thereby transferring effective power to Parliament. 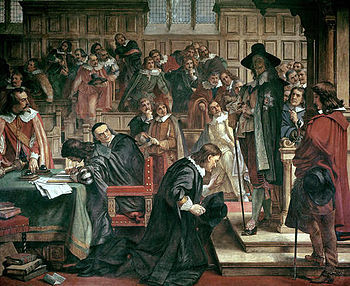 Charles remained firm to his conviction that he was King by Divine Appointment and on 3 January, 1642, tried to arrest Pym and his closest associates in the House of Commons but they managed to evade capture. There could not now be any going back and confrontation was inevitable.
Like many families throughout the country the Verney’s now had to choose which side to support in the coming conflict. Despite his many qualms regarding the King’s religious policies and his choice of councillors Sir Edmund could not betray his Lord and Master, he wrote:
“I do not like the quarrel, I do heartily wish that the King would yield to their desires, but I have eaten his bread and served him near thirty years, and will not do so base a thing as to forsake him now; and choose to lose my life (as I am sure to do) to preserve and defend this which it is against my conscience to do.”
Sir Edmund’s son Ralph, who had sat beside his father in the House of Commons throughout the great debates of the previous months, was equally firm in his own convictions and could not reconcile himself to the King’s cause. He believed that the people through their representatives in Parliament should have precedence in the governance of the country. Like his father he wrote often on the issue but despite sharing similar views they were diametrically opposed on the matter of the King’s rule: “Peace and our liberties is all I desire. Until we have peace we can have no liberty; and without liberty I shall desire no peace.”
Moreover, he had been present during the debates on the Militia Bill by which Parliament tried to wrest control of the army from the King’s control and he had sworn the Militia Oath. Oaths were no small thing in Stuart England and could not be easily broken. He could and would not now retract his allegiance to Parliament.
Sir Edmund accepted his son’s decision with regret. Ralph’s younger brother, also Edmund, did not greet it with such equanimity. He was a fervent Royalist, rash, hot-headed and so unlike the more reflective Ralph and he argued long into the night with his brother in an attempt to change his mind. He believed that any Englishman’s first loyalty was to his King, and what of his obedience to his father! Edmund was outraged but Ralph could not be swayed, they would soon go their separate ways. 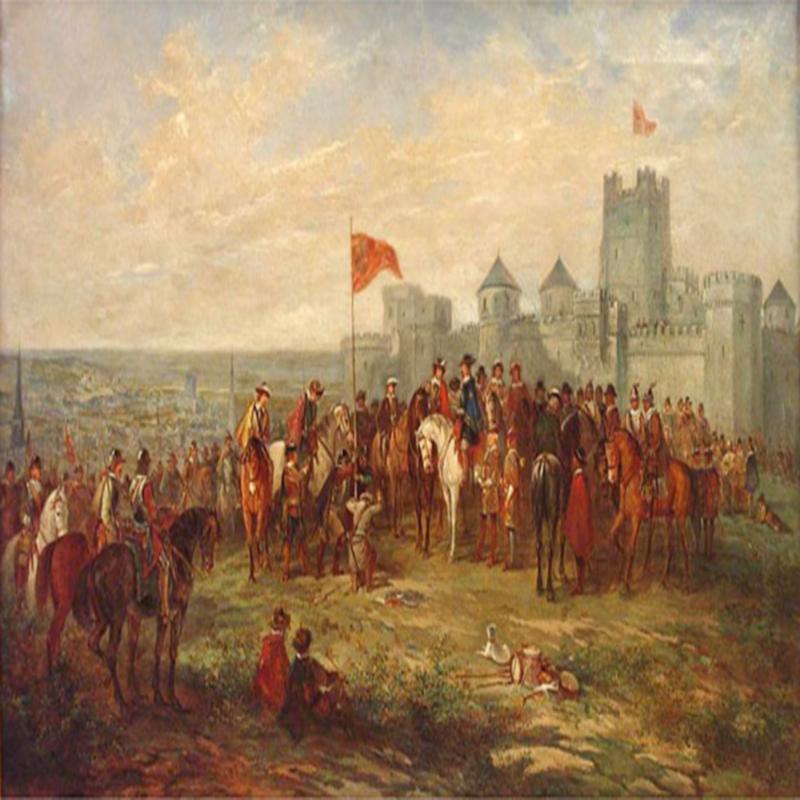 On 22 August 1642, King Charles I raised his Standard at Nottingham in what was effectively a declaration of war against his own Parliament. Sir Edmund Verney’s reward for his many years of devoted service was to be appointed Keeper of the King’s Standard. It was an honour if an onerous one. Even so, he vowed to defend it with his life declaring: “They that would wrest that Standard from his hand, must first wrest his soul from his body.”
The first great battle of the Civil War was fought at Edgehill on 26 October, 1642 and the Royalist Commander Sir Jacob Astley’s prayer before the battle commenced has since become justly famous:
“O Lord, thou knowest how busy I am this day. If I forget thee, do not thou’st forget me.”
The Lord may have remembered Sir Jacob but he was to forget Sir Edmund. He was in the thick of the fighting but refused to relinquish his grip on the Standard even as the dead piled up around him. A witness described what happened, “He killed two men with his own hands before his servant Jason was struck down, but he refused to relinquish the Standard and was killed in the push of pike” 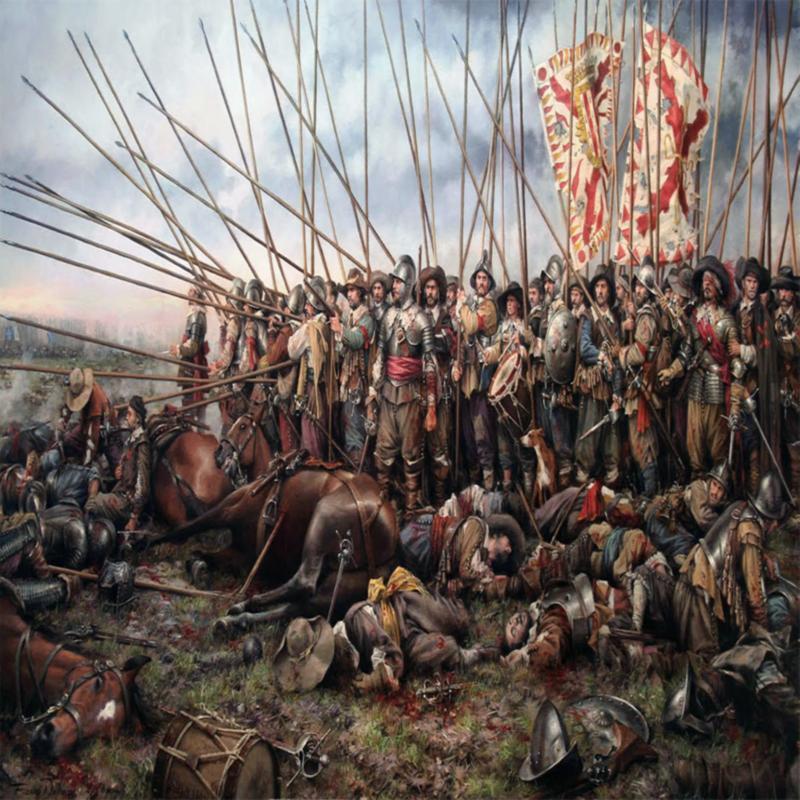 Sir Edmund’s body was never found, only his severed hand still clasping the Standard. It was identified as his by its signet ring the face of which bore the image of the King.
His son Ralph heard of his father’s death while sitting in the House of Commons listening to the Earl of Essex declare his defeat at Edgehill a great Parliamentary victory. He was heartbroken and struggled to hold back the tears. He was likewise distraught to discover that his family did not even have a body with which to carry out a proper Christian burial. Nonetheless, he remained true to his convictions and his belief that only war could bring the King to heel.
With the war going against Parliament and himself dying of cancer, John Pym in his desperation to secure Scottish support agreed to the Solemn League and Covenant which promised to make Presbyterianism the official religion of England. As a result, the treaty was signed that was to turn the tide of the war but it was something that Ralph could not sign up to. Unable any longer to reconcile himself to Parliaments cause, he went into exile. In his absence, in 1646 the estates he had inherited following his father’s death were sequestered.
Whilst Ralph languished in unhappy exile his younger brother Edmund continued to fight for the Royalist cause. Following the King’s execution in January, 1649, Oliver Cromwell, by now Commander of the Parliamentary Army turned his attention to Ireland where the Duke of Ormonde’s Royalist Army continued to hold out.
By September, 1649, Cromwell was besieging the town of Drogheda. Though greatly outnumbered and outgunned its Commander, Sir Arthur Aston refused to surrender despite Cromwell demanding he do so and warning him of the dire consequences if he did not. Parliament’s first two assaults on the town were repulsed but the third however was led by Cromwell in person, the infantry opposing him by the young Edmund Verney. He fought bravely it was said but was cut down and killed. At least he avoided the massacre that followed as more than 2,000 men were brutally murdered after having laid down their arms.
Ralph Verney returned to England in 1653 and was promptly arrested on Cromwell’s orders. He was they said politically unsound and had been implicated in Royalist plots along with other members of his family. He was released from prison following the Lord Protector’s death. He returned to his life as a country gentleman and was subsequently elected to Parliament on a number of occasions but he served only briefly. He had lost his taste for politics and instead concentrated on running the estates that had since been returned to him, and on his work as a local Magistrate. Later with the return of the Stuart Monarchy he received a number of Royal sinecures that were to secure his family’s financial future.
He died on 24 September, 1696, aged 82.
Tagged as: Tudor & Stuart
Share this post: