Posted on 14th February 2021
Titus Oates was a liar, a schemer and a thoroughly repugnant man who was willing to see innocent people go to the gallows to achieve his ends. He remains one of the most disreputable figures in English history.
He was born the son of an Anabaptist preacher from Rutland in 1649 and raised in a strict if unorthodox household even if for him his religious devotions were always secondary to his more secular pursuits. 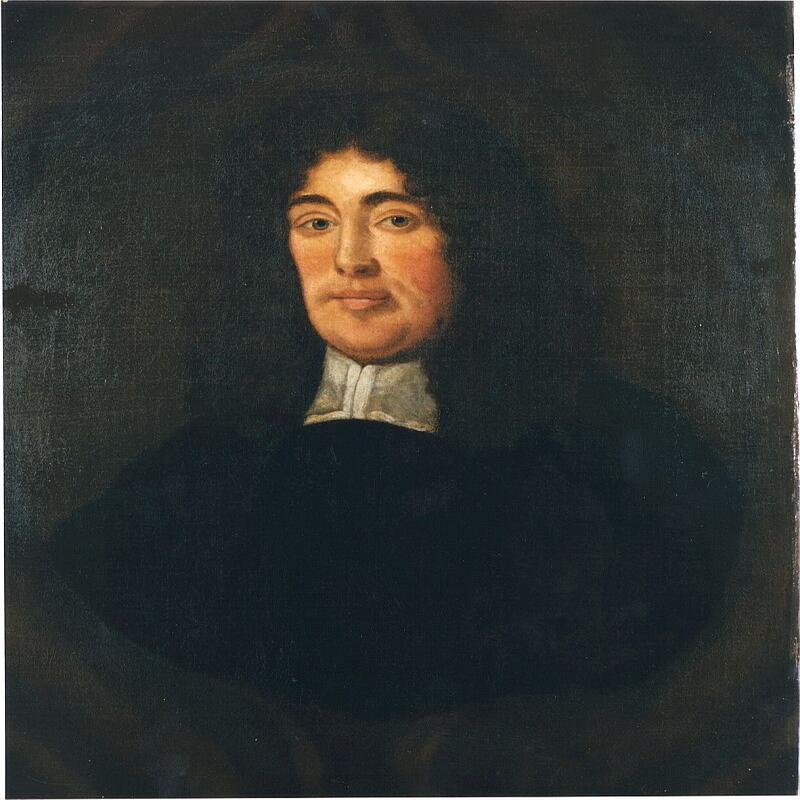 A short man, lame and seemingly very ugly he was also coarse, loud and often foul-mouthed while his active homosexuality was to find him in constant trouble with the law authority and he was to be ejected from both the Cambridge Colleges he attended for importuning. He then perjured himself in Court when he accused a schoolmaster of sodomising him and only escaped a term of imprisonment by fleeing to London and using his father's connections to secure an appointment as a Chaplain on the Royal Navy vessel Adventurer. His shipboard assignment did not last long however, as he was himself accused, of sodomy and only spared punishment because of his status as a clergyman.
Always struggling for money and desperate to be taken seriously he contacted an old friend of his father's, Israel Tonge, an educated man with a doctorate whose great passion was his library but as well-read as he was he shared the prejudices of his day and he was paranoid about Catholics in general and the myriad of popish plots in particular. Together he and Oates co-authored a series of anti-Catholic pamphlets when in 1677 Oates, whose behavior was nothing if not erratic suddenly converted to Catholicism and travelled to the Continent where he joined the Jesuit Seminary at Valladolid in Spain and then later the Seminary at St Omer in France. But again his active homosexuality was to see him ejected from both.
Returning to London he renewed his friendship with Israel Tonge telling him that he had joined the Seminaries only to uncover their secrets. One of these secrets, he said, was a plot to assassinate King Charles II and replace him on the throne with his Catholic brother, James, Duke of York.
Summoning up anti-Catholic feeling in deeply Protestant England was no difficult task and Oates and Tonge now produced a pamphlet suggesting there were Jesuits at every level of government who were planning to rise up, kill the King, and seize power. It was widely read and soon became the talk of the taverns and the gossip on the streets. So much so that a copy of the pamphlet was brought to the attention of the King who despite being initially dismissive handed it over to his Chief Minister Lord Danby to investigate. 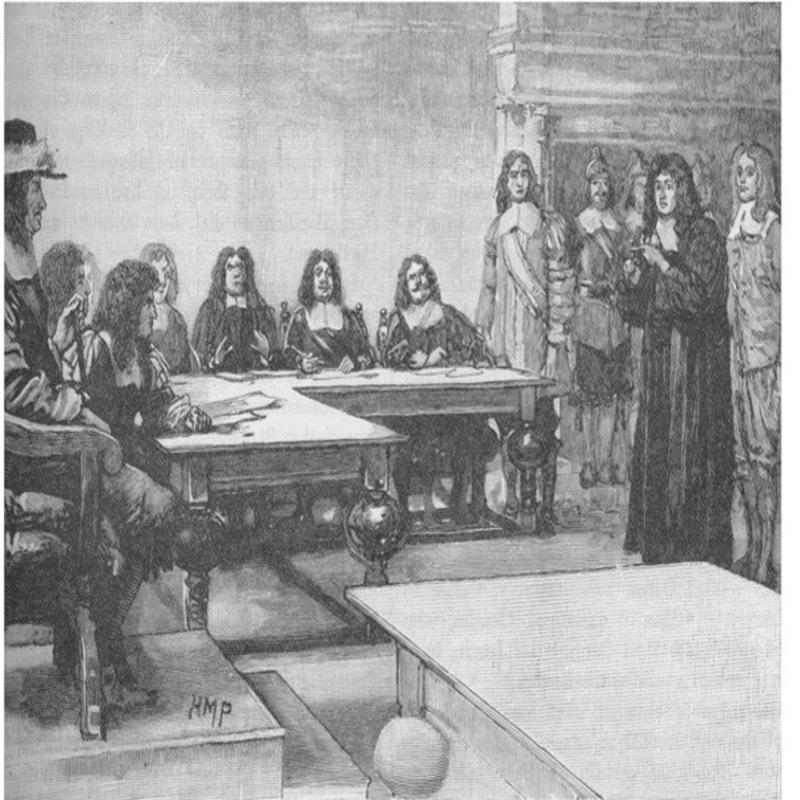 The rumours of Jesuit spies on the streets of London began to spread and fearing anti-Catholic riots it was decided on 26 September 1678 to summon Oates for questioning by the King's Council. Oates testimony was unconvincing to say the least and the entire thing appeared so implausible with endless discrepancies and contradictions so glaring that many on the Council were shaking with laughter rather than trepidation. Oates remained adamant however, and even named names openly accusing the Queen's physician Sir George Wakeman, the Duke of York's Private Secretary Sir Edward Coleman, the Archbishop of Dublin Lord Belayse and the diarist and civil servant Samuel Pepys of being secret Catholics in the pay of the Vatican. The Council remained incredulous nonetheless but events were now to play their part.
Earlier on 6 September, Oates and Tonge had approached the Magistrate Sir Edmund Berry Godfrey to take their official deposition. Five weeks later on 12 October, Sir Edmund was found murdered on Primrose Hill, strangled and run-through with a sword. Now the Popish Plot acquired a momentum all of its own and Oates and Tonge ran with it. The Jesuits were responsible they claimed, and this was just the first murder to be committed by these Catholic Nightriders and rest assured there would be many more to follow. 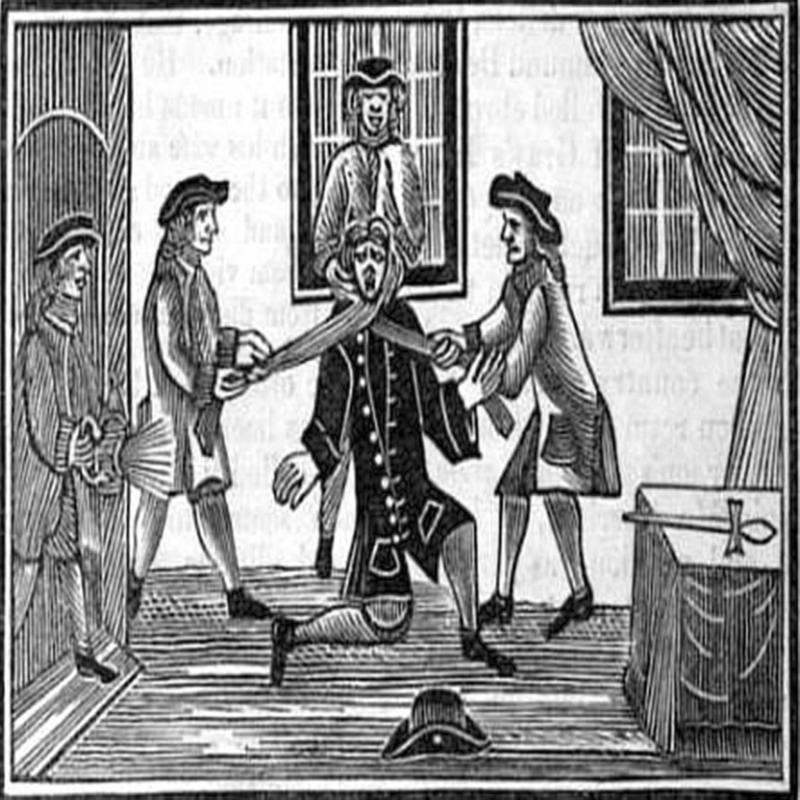 The murder of Sir Edmund gave credence to what was a malicious and paranoid tissue of lies and those who had previously been sceptical now began to believe there may be some truth to them. Suspects were arrested, tried, convicted and hanged on rumour and little else among them, Sir Edward Coleman.
On 24 November, Oates accused the Queen, Catherine of Braganza and her physician of trying to poison the King. Charles was furious and ordered that Oates be bought before him.
The King's careful questioning caught Oates out in a series of lies and he ordered his immediate arrest but England was by now gripped with a frenzied anti-Catholicism and any number of cutthroats and fraudsters came forward to make accusations about murderous Catholic conspirators in their midst, and no doubt make a little money in the process.
With so many people now willing to support Oates in his most outlandish claims the King's anger and scepticism counted for little and the House of Commons now declared it a "Hellish and Damnable Plot.” Parliament released Oates from his incarceration and awarded him an apartment in Whitehall and an annual allowance of £1,200. He was a hero, the man who had saved sturdy Protestant England from the evil machinations of the bloodthirsty Jesuitical Papacy.
Oates and his and unfounded and increasingly hysterical claims were by now being used by those in Parliament who wanted to exclude the Catholic James, Duke of York, from the line of succession in favour of the King's eldest, but illegitimate son, the Duke of Monmouth.
The Exclusionists and their leader in Parliament, Lord Shaftesbury were brilliantly outmanoeuvred by the King, however.
With the possibility of exclusion over support for Oates began to dissipate but even so in July 1681 Oliver Plunkett, the Archbishop of Armagh went to the scaffold on evidence provided by Oates; but this was to be the high-water mark of the Popish Plot which had seen 30 innocent men executed as a result of Oates's accusations but Justice's were now beginning to find against him. It was following the exoneration of the Queen's physician, Sir George Wakeham, of any involvement in the Popish Plot that Lord Justice Scroggs became the first person to speak out publicly against Oates and his outlandish claims casting doubt both upon their validity and the moral rectitude of the man who had made them.
It soon became evident that for all the fire and brimstone no actual evidence of a Popish Plot had ever been produced or discovered. In August 1681, Oates was forced to relinquish his apartment in Whitehall and his allowance was withdrawn. His response was to make even more hysterical accusations denouncing just about everyone who was anyone in Stuart England but no one was any longer listening. Already under arrest for propositioning a young man for sex he was tried for sedition, found guilty, and fined £1,000.
On 6 February 1685 Charles II died and was succeeded by his brother James who still had a score to settle with Oates. 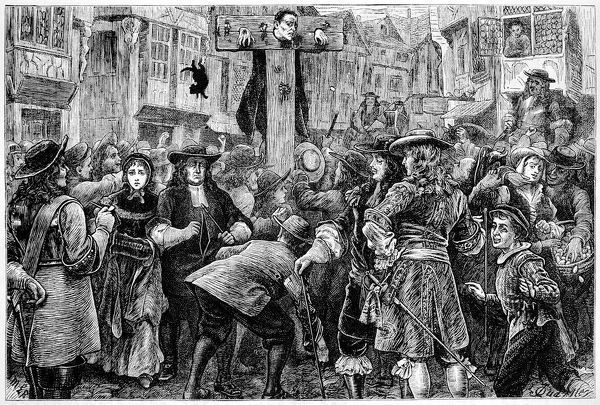 On 6 February 1685 Charles II died and was succeeded by his brother James who still had a score to settle with Oates. He had him arrested and tried by the notorious Judge Jeffries who declared him a "Shame to Mankind". Oates was sentenced to be first pilloried then stripped, tied to a cart and dragged through the streets of London before being publicly whipped. He was also imprisoned for life.
Oates was in fact to serve only three years in prison released after William of Orange who deposed James in 1688 and had some sympathy for him commuted his sentence and provided him with a small pension.
Oates gladly took the money but continued with his accusations declaring that only he knew the truth but fortunately for him perhaps, no one was any longer listening.
In 1693, he married but domestic bliss wasn’t for him and he continued to cruise the streets of London looking for young men and falling foul of the law. He died on 13 July 1705, an ordained Baptist Minister.
Tagged as: Tudor & Stuart
Share this post: