Vestal Virgins: Keepers of the Flame

Posted on 15th January 2021
The Vestal Virgins occupied a unique place in Roman society and their continued existence was considered essential for the preservation of the city and indeed its empire. As such, they possessed an exalted status only less great perhaps than the Emperor himself. They were the Priestesses of Vesta the Goddess of the Hearth and the College of the Vestals where they resided was considered a sacred place. The long-term security and prosperity of Rome depended upon their cultivation of the ‘Sacred Flame’ that burned eternal and was not permitted to go out and any violation of the College of Vestals was punishable by death.
Future Vestal Virgins were pre-pubescent girls under the age of ten, the daughters of the twenty highest born most noble families in Rome chosen by lot by the Pontifex Maximus, or High Priest. Once chosen the girl concerned would be made to swear an oath of celibacy that could not be broken. She was then taken away from her family to serve her apprenticeship in the College of Vestals. 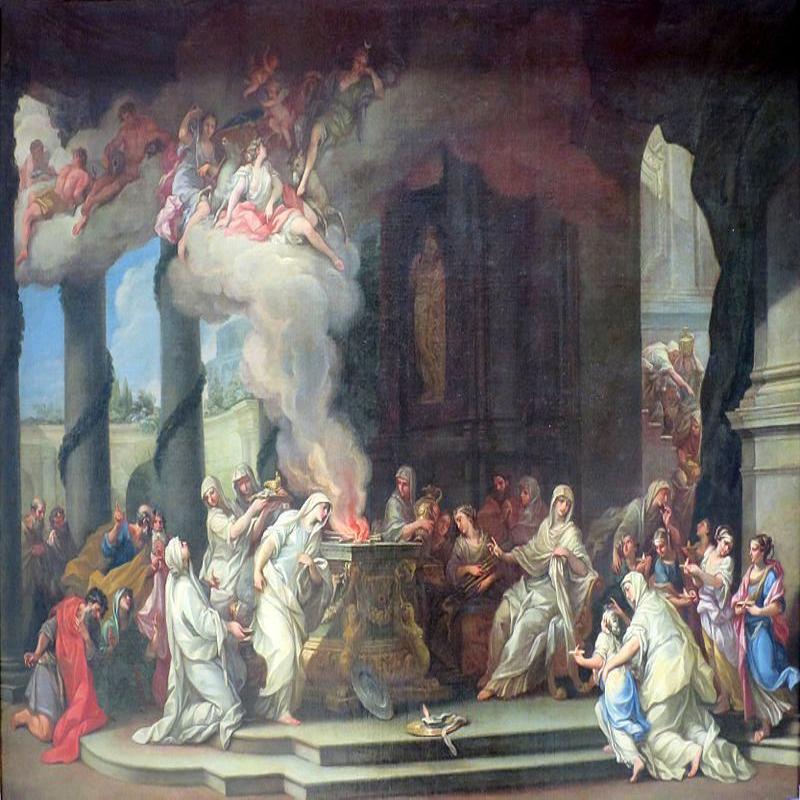 The Vestal Virgins occupied a unique place in Roman society and their continued existence was considered essential for the preservation of the city and indeed its empire. As such, they possessed an exalted status only less great perhaps than the Emperor himself. They were the Priestesses of Vesta the Goddess of the Hearth and the College of the Vestals where they resided was considered a sacred place. The long-term security and prosperity of Rome depended upon their cultivation of the ‘Sacred Flame’ that burned eternal and was not permitted to go out and any violation of the College of Vestals was punishable by death.
Future Vestal Virgins were pre-pubescent girls under the age of ten, the daughters of the twenty highest born most noble families in Rome chosen by lot by the Pontifex Maximus, or High Priest. Once chosen the girl concerned would be made to swear an oath of celibacy that could not be broken. She was then taken away from her family to serve her apprenticeship in the College of Vestals.
The ceremony for choosing a Vestal Virgin was known as the Captio, or Capture. Once the Vestal had been chosen the Pontifex Maximus would point her out to everyone present before taking her hand and leading her away from her family with the words: "I take you Amata, to be a Vestal Priestess, who will carry out sacred rites which it is the law for a Vestal to perform on behalf of the Roman people, on the same terms as her who was a Vestal on the best terms."
Though it was a matter of considerable pride to be selected as a Vestal Virgin for both the young girl and her family it became increasingly difficult to find patrician families who were willing to commit their daughters to the College. It was an asset after all, to have an attractive young daughter not just financially but politically and many turned to bribery to avoid their selection. For it was not possible for a Vestal once chosen to opt out, she had to serve the minimum thirty years required before she would be permitted to retire, break her vow of chastity and be allowed to legally marry; and while it was a very great honour to marry a Vestal Virgin - it was believed to bring good fortune and certainly provided a comfortable pension - but she would also have been old for the time, her looks faded, her value as a mother slim.
The Vestals themselves only ever numbered between three and six but there would be a great number of novices, as many as twelve, and new novices would be chosen every five years. Upon a Vestals retirement or death her replacement would be chosen from among the novices.
The House of the Vestals was the Atrium Vestiae, a three-storey building which lay at the foot of the Palatine Hill immediately behind the Temple where the Sacred Flame was maintained. The most famous Chief Vestal was Occia, who presided over the College for 57 years, and the last recorded Chief Vestal was Coelia Concordia in AD 380.
The Vestal Virgins were not only responsible for the preservation of the Sacred Flame (from which any Roman citizen could obtain fire) and which if it ever went out was believed to portend the city's doom; they also collected water from the Sacred Spring, presided over the preparation of the food for use in religious ceremonies, made the mola salsa (salted flour) which was sprinkled on the animals and altar before sacrifice, and were responsible for the sacred objects deposited in the Temple. Prominent people such as Julius Caesar, Mark Antony, and the Emperor Augustus also left their Wills in the safekeeping of the Vestals.
They also presided over the Vestalia, the Festival of the Hearth Goddess Vesta which was celebrated between 7 and 15 June. This was the Vestals holiest time of the year and it was only during this period that rather than supervise the preparation of the mola salsa they were expected to make it themselves.
The Vestals had a reserved seat of honour at the Games while their presence was expected at all public ceremonies to which they would be taken in a carpentium, a covered two-wheeled carriage that would be preceded by lictors, or male attendants who would ensure they had right of way. They were in fact escorted wherever they went as their persons were inviolate - to harm a Vestal was punishable by death.
They also enjoyed certain rights and privileges, they could free slaves and have prisoners released simply by touching them, and if a condemned man were to catch a glimpse of a Vestal Virgin on his way to his place of execution he would be pardoned. They were not subject as other women were in Rome to the patria potestas and dependent upon their father or the male head of the household for all things. For example, they could vote, make wills, and own property in their own right. 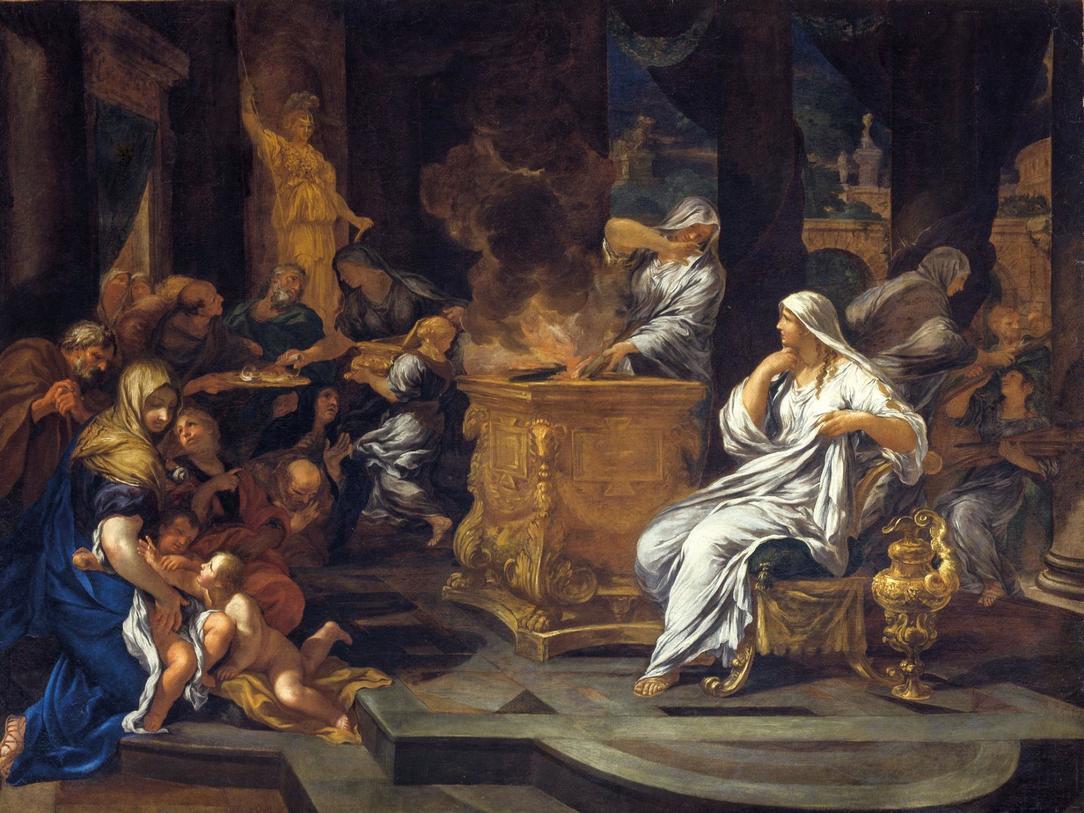 The Vestal Virgin then, was a powerful female figure in an overwhelmingly patriarchal society. The influence wielded by the College of the Vestals was witnessed in the events surrounding the perilous position the young Julius Caesar was to find himself in.
His name had been placed on the Proscribed List, those who had been singled out for execution by the dictator Sulla. Caesar's mother begged the Vestals to intercede with Sulla on her son's behalf. They did and Caesar's name was removed from the List, though Sulla was reluctant to let such an obviously ambitious and dangerous man, live.
The status of the Vestals reached new heights under the Emperor Augustus when he included them in all major dedications and ceremonies and proclaimed them to be of incorruptible character and to be trusted in all things. They were, he said, the epitome of Roman Womanhood to which all women should aspire. 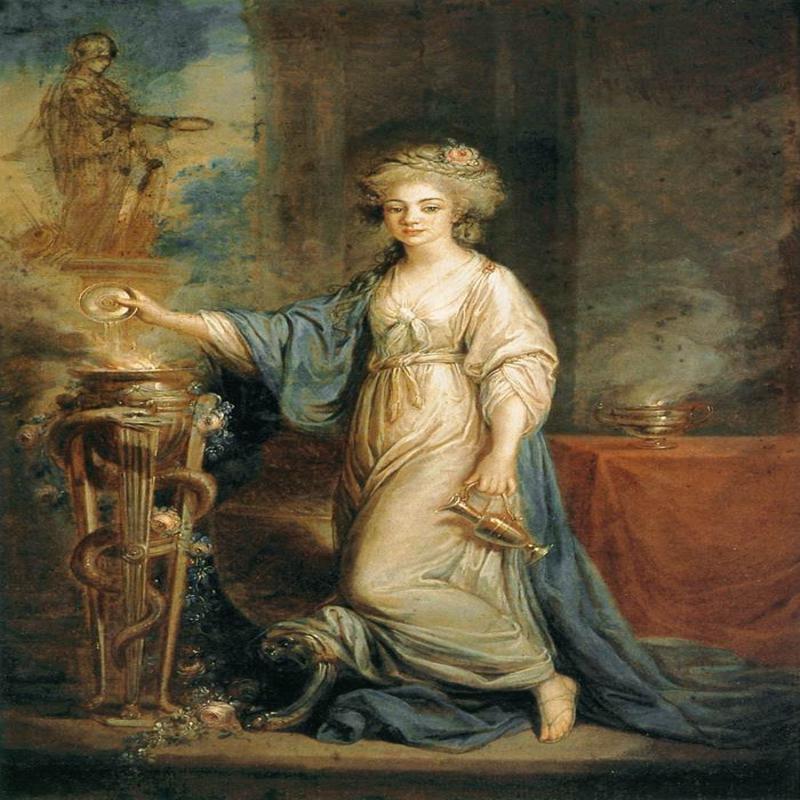 Vestal Virgins were expected to dress plainly, they wore no makeup and set their hair in a style known as the Seni Crines, braided and set above their forehead without thrills and adornments. Their clothes were of white cotton in summer and wool in winter. They could only wear white as a symbol of their chastity though it would be decorated with red ribbons as a display of their commitment to keep the Sacred Flame burning. Over their left shoulder they draped a palla, or long simple shawl, and would only ever appear in public wearing a veil.
But with rights and privileges comes responsibility.
As it was believed that it was the Goddess Vesta who protected Rome and that the Vestals were the servants of Vesta, if any misfortune befell the city such as fire, plague, starvation, or even in some cases defeat in battle then it was because the Goddess Vesta had withdrawn her protection. She would only do this if she had been offended in some way and so it was be assumed that a Vestal had done so, broken her vow of chastity perhaps.
The chastity of the Vestals was considered essential to the welfare of Rome and once a young woman was made a Vestal she became a daughter of the State. If she was found to have had sexual relations it was treated both as incest and an act of treason. The punishment for breaking the Oath of Celibacy was to be buried alive in the Campus Sceleratus, or Evil Field, an underground chamber situated near the Colline Gate. An unchaste Vestal had to be buried alive as it was not permitted to spill the blood of a Vestal Virgin. However, it was also illegal to bury anyone within the city limits. This problem was overcome by providing the condemned priestess with a little food and water. She would then technically die in a habitable room and not a death chamber. Such a punishment was rare however with there being only ten recorded cases in the thousand year history of the College of Vestals.
On other occasions rumours of fornication could be quashed upon swift action by the accused Vestal herself. For example, the Vestal Tuccia was accused of breaking her Oath but proved her innocence by carrying a sieve of water through the streets of Rome as a sign of her purity whilst reciting the words: "O Vesta, if I have always brought pure hands to your secret services, make it so now that with this sieve I shall be able to draw water from the Tiber and bring it to your Temple."
The earliest Vestals are believed to have been whipped to death for having sex and it was the last Roman King Tarquin, who instituted the punishment of burial alive which he inflicted upon the Priestess Pinaria. The Vestal Urbinia was also known to have been beaten unconscious before being buried alive in 471 BC.
Most of these punishments were inflicted at times of great political uncertainty but they were also vulnerable to accusation based upon the merest suspicion of wrongdoing. The Priestess Municia was condemned to be buried alive on the evidence of a slave after she had been was accused of dressing improperly. Likewise, the Vestal Postumia was suspected of being unchaste because of her immodest attire and provocative behaviour. She was reprieved however, but sternly warned: "You must leave her sports, taunts, and merry conceits."
Both Vestals had been convicted on the evidence of slaves as also were the Priestesses Aemilia, Licina and Martia, all of whom were executed, the latter after being found to have had sexual intercourse with a Barbarian. The punishment for the lover of a Vestal was similarly harsh being publicly whipped to death in the Forum Boarium.
The College of the Vestals was disbanded and the Sacred Flame extinguished on the orders of the Christian Emperor Theodosius in AD 394. It was said that the noblewoman Serena, the niece of Theodosius had entered the Temple and removed the necklace from the statue of the Goddess Vesta placing it around her own neck. As she did so an elderly woman appeared to chastise her for her impiety calling down the punishment of the Gods upon her. It was said Serena died not long after having been tormented by nightmares.
In AD 410, just sixteen years after the closure of the College of the Vestals the once mighty city of Rome was sacked by the Goths.
Tagged as: Ancient & Medieval, Women
Share this post: