Posted on 31st January 2021
If Jane Austen’s novels captured the latter part of the Georgian Era in all its country house grandeur then the picture painted some decades earlier by the artist William Hogarth (1697-1764) could not have been more different. He was a social critic and satirist whose work ranged from traditional portraiture, to etchings, caricatures and the storyboard style morality tales that have since earned him the reputation as the first sequential artist.
He was born the son of a vicariously employed and often impoverished Latin teacher who was to spend five years in Fleet Prison for debt following the failure of his idea for a Roman themed Coffee Shop. The shame of his father’s failure etched itself deep into the young William’s consciousness and he would later refuse to acknowledge let alone speak about it. 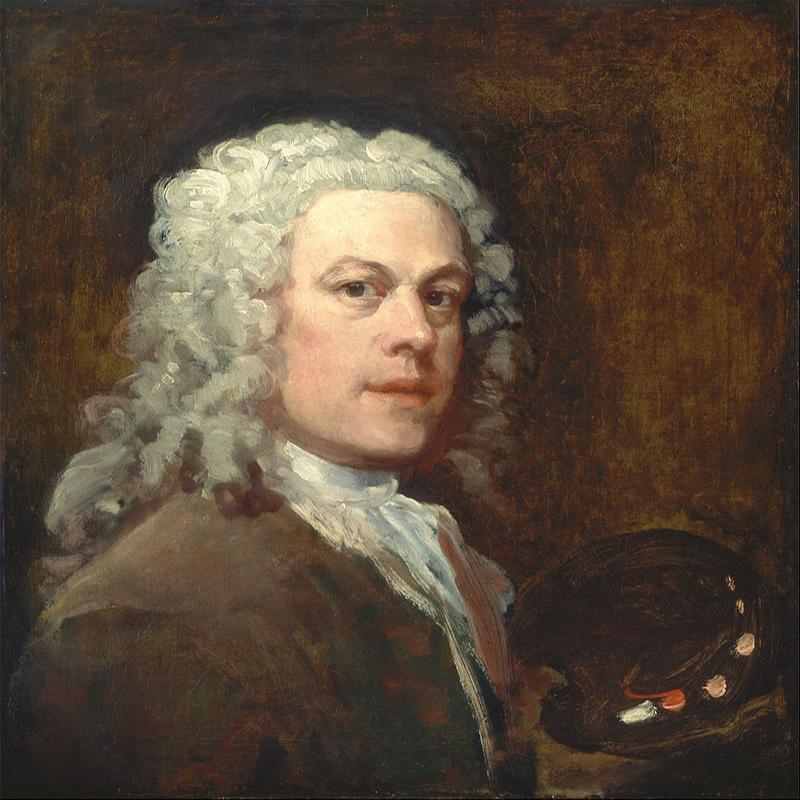 It did little to distract him from his chosen career path however, he was desperate to be an artist and fascinated by the city of his birth London he would walk its streets sketching its people, its markets, its fairs, its great social gatherings. It was for him a monster of limitless possibilities and endless pitfalls, the greatest metropolis on earth, a place of splendour and squalor in equal measure whose streets said to be paved with gold were in fact covered in filth that made the fortunes of some but ruined the lives of many more.
Though William was soon to be recognised as a talented artist and was earning commissions from wealthy patrons for traditional art works it would always be in the street life of his youth that his passion remained.
In 1731 he painted the Harlot's Progress, a series of six paintings that depicted the downfall of Moll Hackabout, a naive young girl from the country who was to fall in with a bad crowd and be seduced into a life of prostitution. It was to prove a great success and four years later he followed it with the Rake's Progress which was the similar story of Tom Rakewell, the son of a wealthy provincial merchant who coming to London is corrupted by its vices and squanders his fortune on sex and drink and other debaucheries before spending time in Debtor's Prisons and finally ending up in Bethlehem Hospital for the Insane.
A critic of the Government of Sir Robert Walpole much of Hogarth's middle years were to be spent satirising the iniquities of "Cock Robin's" Administration, though he was careful not to alienate those he relied upon for his livelihood. So he satirised in pictures rather than words; it was after all, safer to carp with humour from the sidelines than stand upon one’s dignity on the hustings. 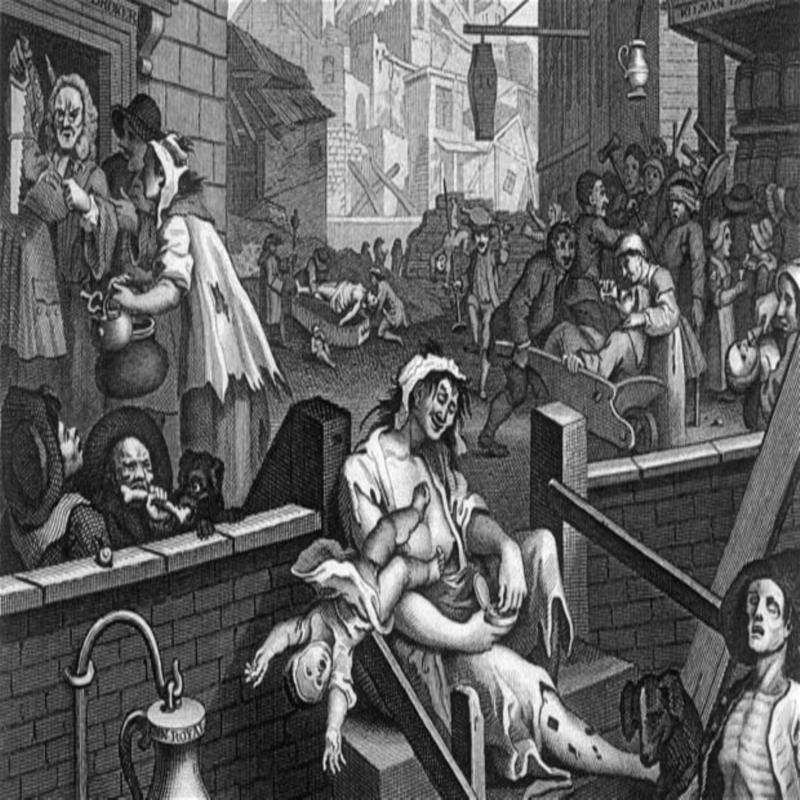 He is perhaps as famous now for his etchings inveighing against the evils of alcohol such as Gin Lane and Beer Street as he is the Harlot and Rakes Progress, not that Hogarth himself was by any means teetotal. His close friend the novelist and magistrate Henry Fielding, who along with his blind half-brother John was to found the Bow Street Runners, the first recognisable police force, was to distribute Hogarth's images of drink-sodden London in his campaign to restrict the availability of gin (Mother's Ruin) and price it out of the reach of the common people.
Though Hogarth is viewed now as a political artist in particular his paintings of violent and corrupt electioneering his art was always used more by others for political point-scoring than himself. He merely was cast a critical eye.
William Hogarth died on 26 October 1764, a rich, famous and well-connected old man.
The eulogy at his funeral was read by the famous Shakespearean actor David Garrick who also composed the epitaph for his tombstone:
Farewell great Painter of Mankind
Who reach'd the noblest point of Art
Whose pictur'd Morals charm the Mind
And through the Eye connect the Heart. 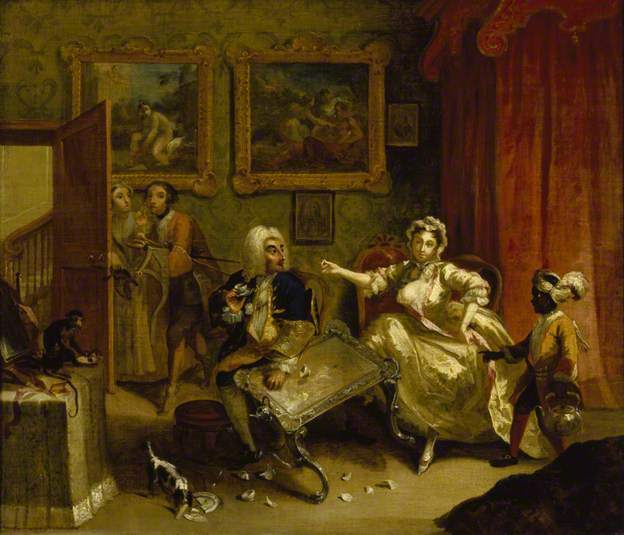 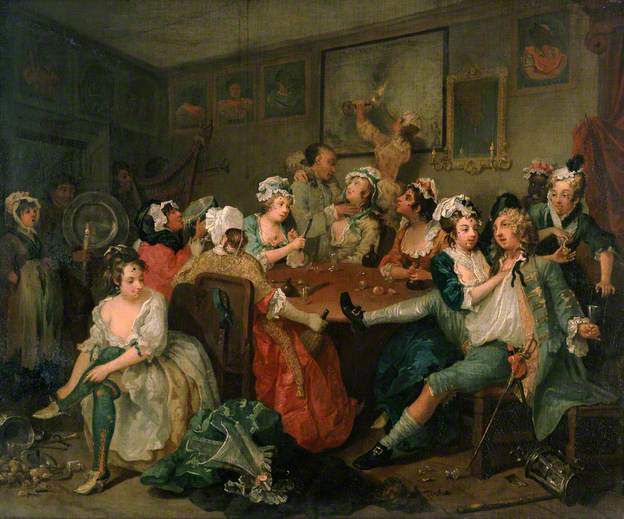 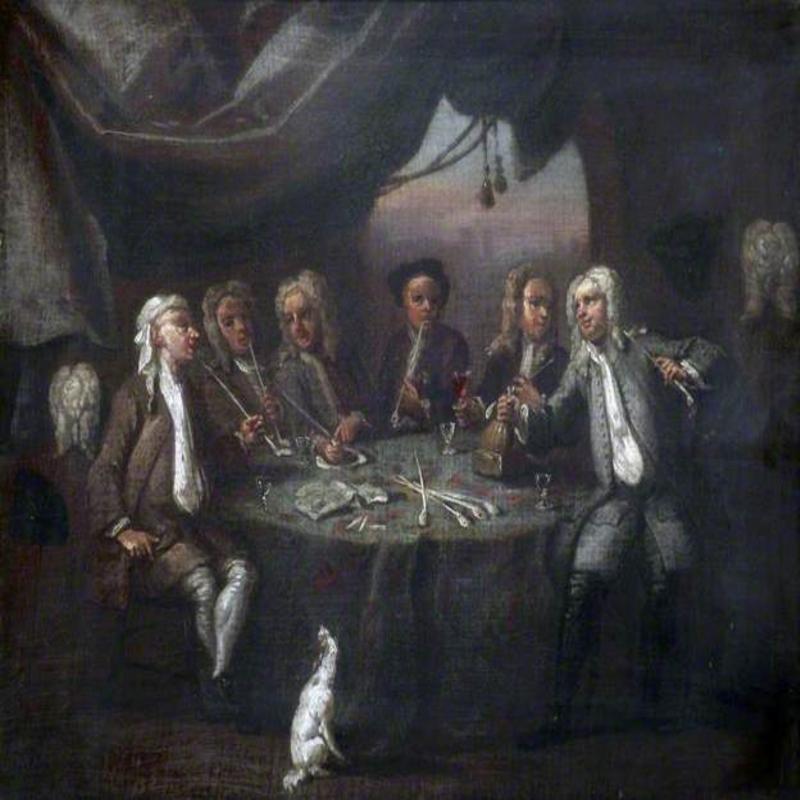 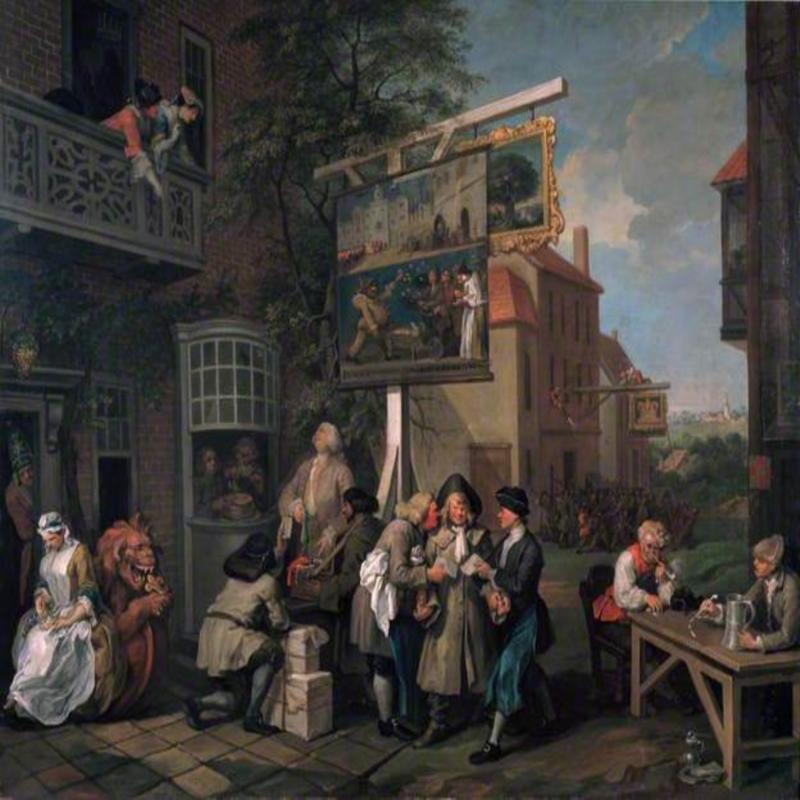 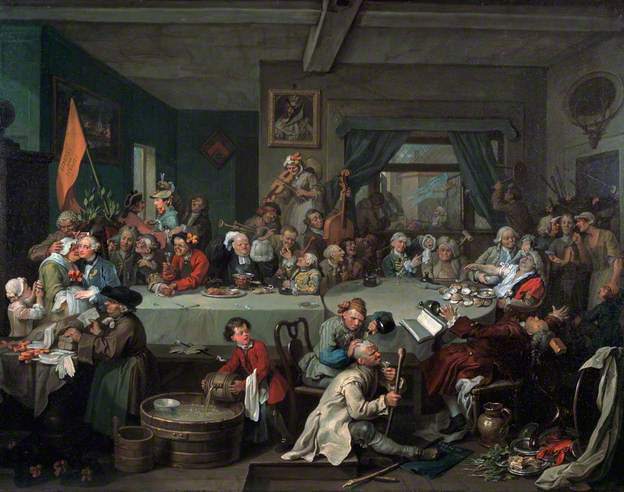 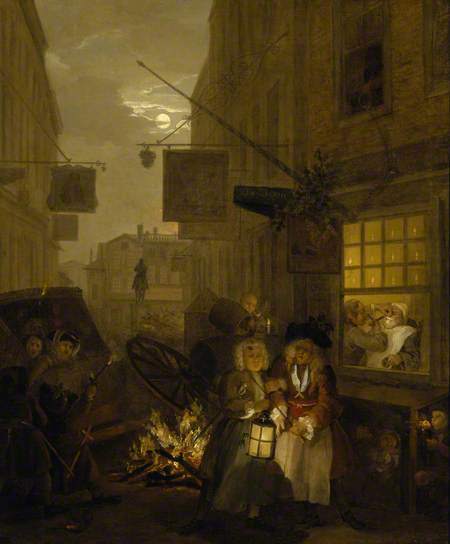 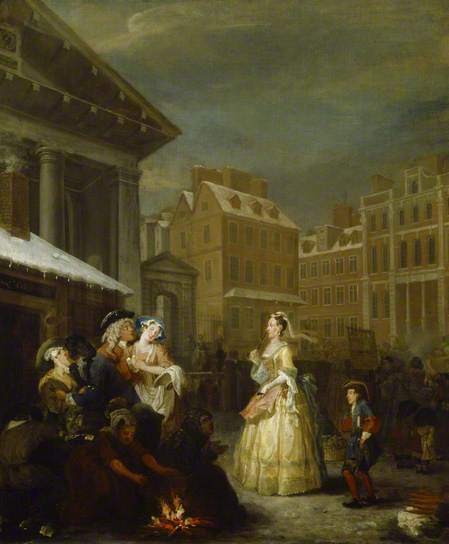 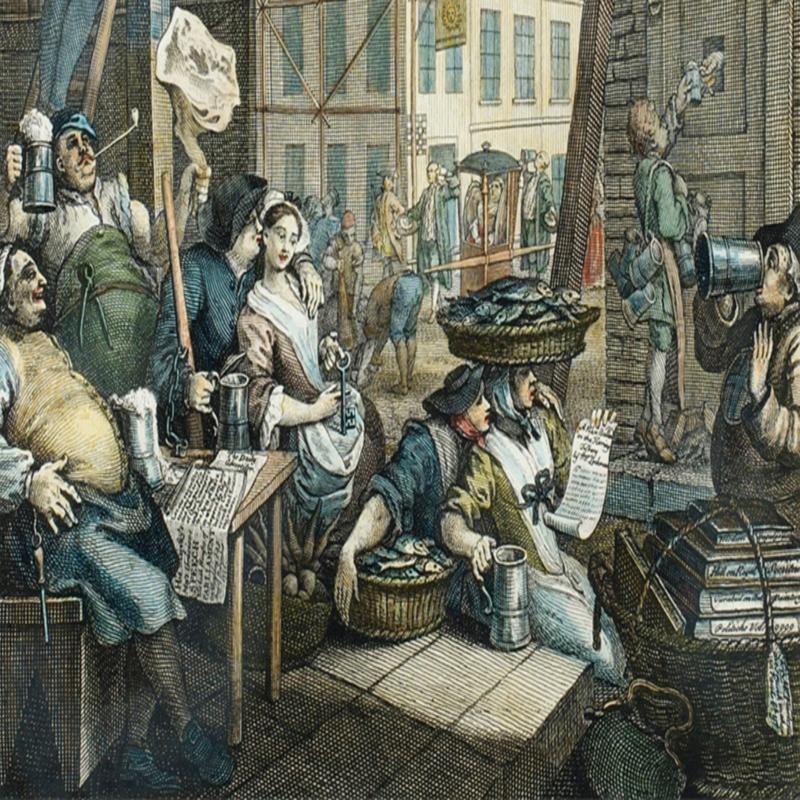 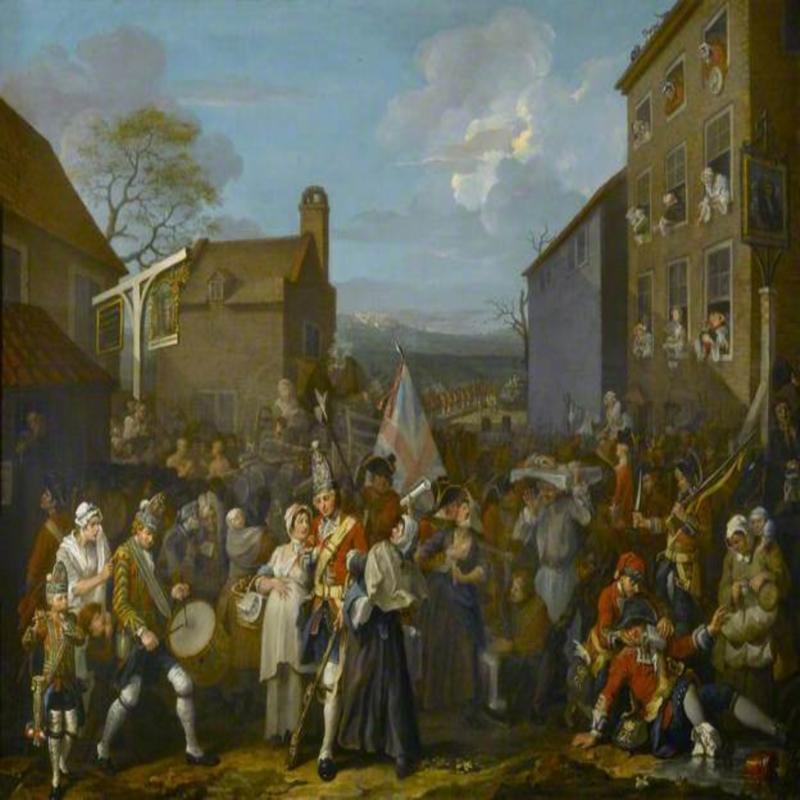